Sorry if this isn't in the right section. I know vacuum lines aren't wiring.

I am just wondering what you guys use to replace your old brittle ac vacuum lines. Mine are already broken and snap at just a light bend.
Do they make just universal vacuum hose that small? 1/16" ID I'm guessing?

Also is there a diagram of where all the lines go?

They do . You have to go to a well stocked auto parts store. Auto zone won't have that. Check even in Home Depot. You might find something.

Thanks for the link to that thread. I knew I had seen this question before but searching didn't bring up that thread.

Ant, I haven't had the chance to swing by any parts stores but I've been looking online and all I find that small is either food/lab grade plastic tubing and some small engine fuel line.
Idunno about the food grade stuff because it probably won't hold up under the hood at those temperatures. The fuel line might work but its yellow. That might be a last resort.

I bought some a long time ago but I know they sell it. Check the Gates or Dayco website. Maybe a heavy truck parts store would have it or a tractor dealer.

I went to advance and bought the smallest vacuum hose they had, 3/32". I'm assuming the stock tubing is 1/16" so we'll see how it goes. It's definitely not the same material but it's what they use in modern vacuum ac systems. I'll post the results if everything works. Might have other issues with the system as well.

So I got everything hooked up as per the diagram in the other thread. Got everything figured out except the brown line that it says goes to the water valve. The problem is that in 77 they (apparently) didn't use a water valve. So I guess I will just cap that line? That was the line that was broken btw.
I haven't cranked the car to test the ac controls yet.

My next AC question is regarding the round rubber connector with the green and green/white wires.
Again my later AC system doesn't seem to have the POA valve that I think it goes to.
I'm wondering if someone installed an earlier ac harness or something.

SonOfTheGrim wrote:So I got everything hooked up as per the diagram in the other thread. Got everything figured out except the brown line that it says goes to the water valve. The problem is that in 77 they (apparently) didn't use a water valve. So I guess I will just cap that line? That was the line that was broken btw.
I haven't cranked the car to test the ac controls yet.

SonOfTheGrim wrote:My next AC question is regarding the round rubber connector with the green and green/white wires.
Again my later AC system doesn't seem to have the POA valve that I think it goes to.
I'm wondering if someone installed an earlier ac harness or something.

My apologies, the green and green/white wires go to the compressor. The plug I meant is the green and light green/black wired one. It has a round rubber plug on the end and goes to something on the passenger side of the engine bay.

And I don't have a water valve in my chevelle, my el Camino, or any of the parts that came with either car. I wonder if there was some delete that people did for some reason.

If your cars came from the factory with a/c, then they had a water valve. It was the only way to shut off the flow of warm coolant into the heater core when the a/c was on and Temp lever pushed to Cold.

I'm not remembering a two-wire green and green w/black with a round connector.

I'll have to find a water valve then. Probably after winter.
And I'll take a picture of the plug tomorrow.

Here is the complete harness. I don't have my car to reference the connections but I think the black round connector connects to the condenser/fan on the firewall somewhere. Its a connector where it will only fit, most of connectors have a unique connection point. 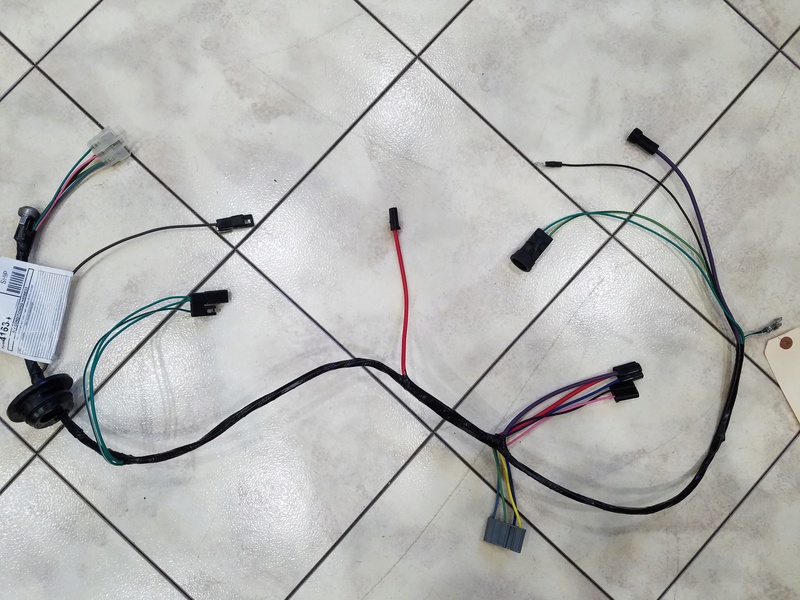 Your early question about the 2 wire conecter? I believe it goes to the receiver dry mounted next to the blower motor? I could be wrong, but when I took my A/C stuff off, I thing that's where it was plugged into. The one I'm referring to is the one I circled here. 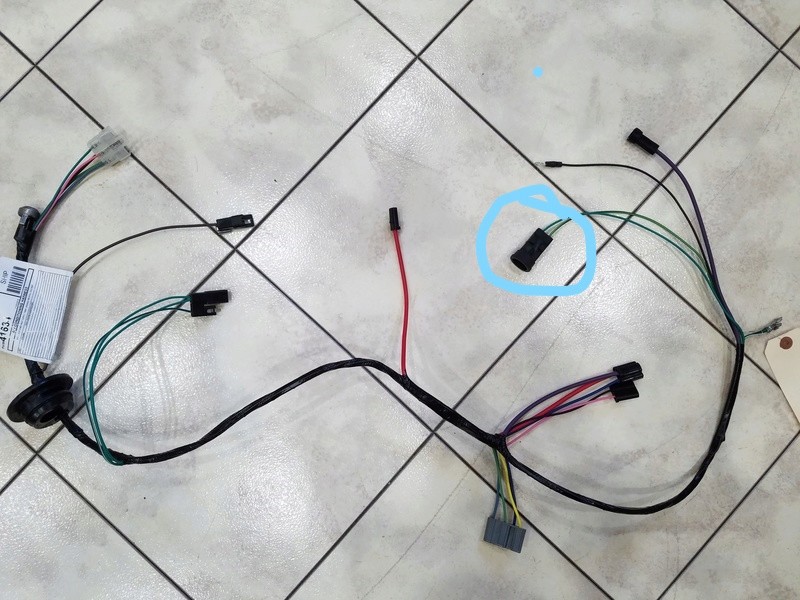 This is curious. I was also thinking that it went to the dryer reciever somehow but my AC evaporator setup doesn't look like the other pictures I've seen of g3s. I'll get some pictures in the next day or so and post them so we can try to decipher this puzzle.

Btw the plug circled IS the one I am talking about.

I think there is one that plugs into a connector that goes into a sensor in the block. Maybe that's it,but I think it will still work with out that plugged in. I will take a look at my 77 later. See if it has that.

The only connector the harness didn't come with is on the far right with the tag on it. It has to quick connects but thats it. The connector isn't manufactured any more (per M&H) and you're supposed to use the old one and attach it to it. I'm not sure what it is for or what the connector looks like.

I finally got out to my garage (been snowed in and cold as hell here in GA) and got a picture of my ac setup. Nowhere on my collector is there an electrical connector for the plug. 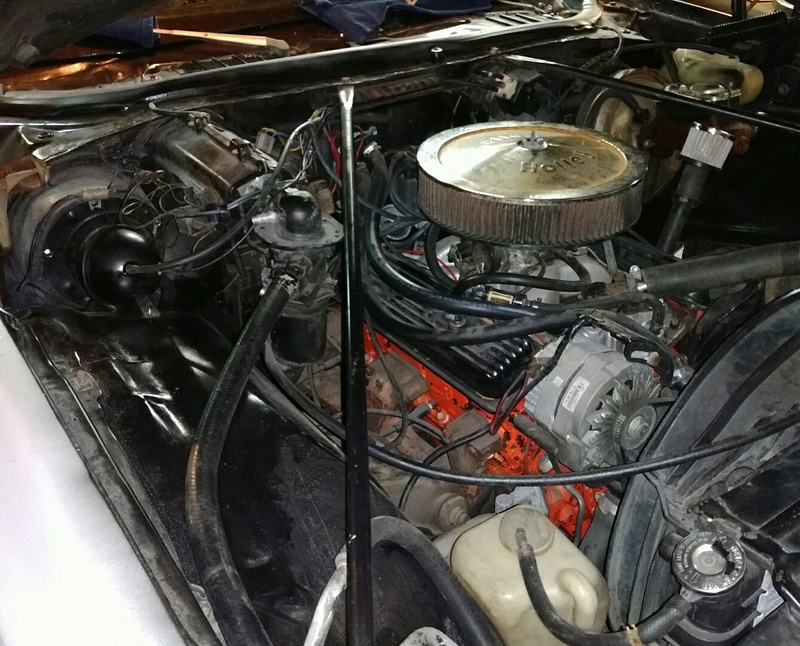 But this is what ever other ac setup on g3s I've seen looks like. This DOES have a connector for the plug. 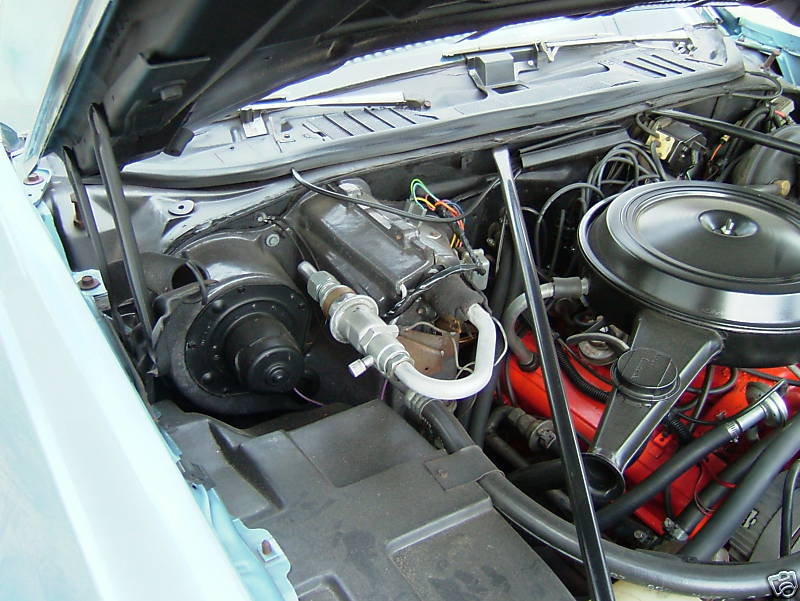 Thing is, this ac system came from my el Camino which is still covered in snow and ice so I can't go look and the heat and ac were disconnected since I've owned it anyway.
My chevelle didn't include any ac parts aside from the condenser and heater core.

So is my system from an older car? Maybe they got it from the 72 whatever the engine came out of?

73 only had the POA valve as shown in second pic. Other than a "superheat" switch and safety fuse, this system was all mechanical. the superheat switch is on the back of the compressor. One black round connector. If a leak developed, The compressor will over heat, tripping the superheat switch, blowing the 3 prong safety fuse and cutting power to the clutch. The compressor runs constanly. The POA & expansion valves would open/close to prevent freeze ups. Crude system. The rest of the wiring is all blower motor related.

The first pic shown is a "VIR" system. Used in 74 & 75? I don't know about the wiring on this system but I think it still used the superheat switch. Not sure how it works other than the dryer is in the VIR assy. All one unit.

The third system used showed up in 76/77, Orifice tube cycling clutch. This is a all electric system. The pressure switch would monitor the pressure and cycle the clutch on and off. this is done to prevent the evap from icing over, and thats when the fuel economy issues hit. The smaller radial compressor started showing up about this time.

All three use different harness's. The connector circled in the pic goes to the pressure switch. That harness is for the cycling clutch system.

I really couldn't say what my system came from. My engine is from a 72 commercial truck or something so maybe they used those parts.
Does this later system use a water valve? I'm still scratching my head over that.

On a side note, I drove my car down the road for the first time yesterday and got everything up to temperature and the heat works great! Seems like all the vacuum controls are working too.