You know the value is...

You know the value is...

going up when somebody tries to fake one and even gets the year wrong.

I wouldn't swear to it, but the interior screams Malibu, no emblems anywhere but the nose and the shortage of pix tells a tale

Yeah...looks like he added a repro fiberglass nose to what was probably a '74 Malibu.

Can't see the tails, but I agree.

It must be because he can change the nose but not the year. I would hope anyone looking at it would do the VIN research to know the difference.

It blows my mind a little that folks are starting to "clone" and fake G3 cars. I guess it indicates increasing value, but I never thought "authenticating" a G3 car would be necessary.

There's a guy on CL in another state (and the same car on a popular G3 site) that got called out recently for advertising a car as a "special" G3.
He immediately removed the car from CL and changed the description on the other site.
He may have just made a mistake or really thought it was authentic, but his actions after getting loudly bysted by someone who had allegedly looked at the car and talked to him, sure made him seem guilty of shenanigans.

It does have the right steering wheel. Mine had that one until I swapped it out. The sweep gauge tells on it for me. I think Laguna's only had round gauges. The color of the interior may have been possible, but unlikely IMO.

Agreed, but that wheel is black in a saddle interior.

Also agree (IIRC) 74s had round gauges and were also mostly white/red or burgundy/red (I've seen 2 black/black) and all Lagunas 74-76 had unique door panels with Laguna S3 emblems and dash emblem, at least I'm sure 75 did.
75-76 had window louvers, 74 didn't.
Yes?

My '75 Lugans SS 454 bench seat auto on the floor also had one of those steering wheels and even plainer door panels.  lol 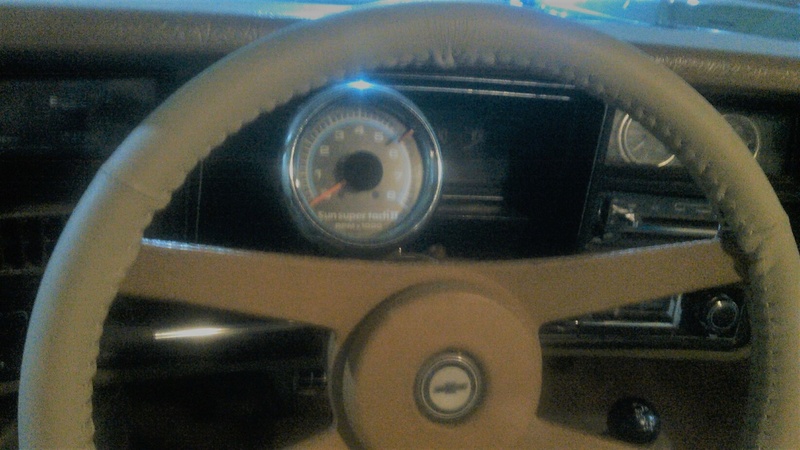 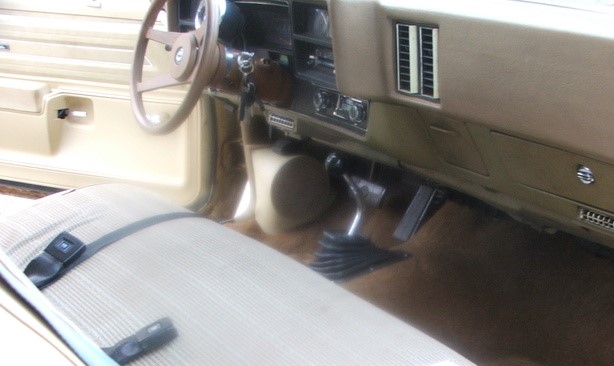 My 76 had the round gauges and a square dash plaque that said Laguna. Otherwise, it is identical to the Malibu.

This is my door panel that began life as a white one but was colored gray by the previous owner. It does have the "E" in the vin. 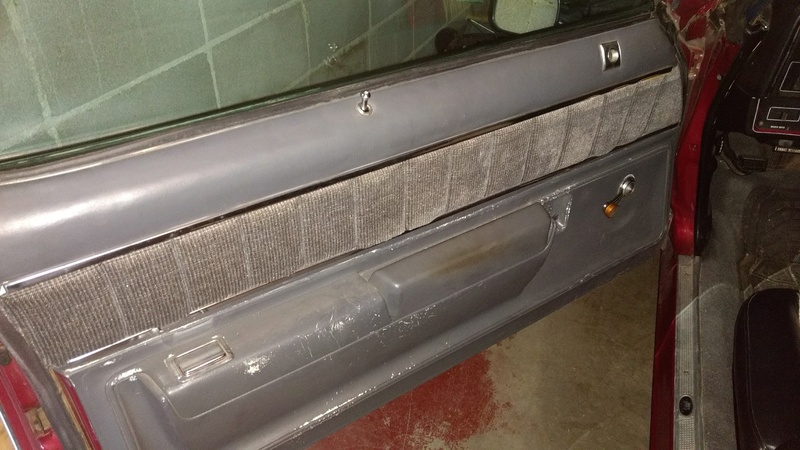 I am also missing the rear bumper filler and it is looks very similar to the photo in the ad from the same angle. I still think the ad car is a dressed up Malibu.

So fasrnur's photo is proof that Laguna's came with rectangle window gauges apparently.

Even if a car had the right vin code, I'd still be looking at the sequential number on the block and trans for "problems".

I'm sure no expert on these, but didn't the early years have the different nose, and not the slanted type ?
I personally like the early one best !

I was being a smart A$$ bigredlaguna. If you read it again, I said mine was a Laguna  SS  454. Of course they never made one of those, like the one in the ad is probably not a real one either.   lol

fasrnur wrote:I was being a smart A$$ bigredlaguna. If you read it again, I said mine was a Laguna  SS  454. Of course they never made one of those, like the one in the ad is probably not a real one either.   lol

Gotcha. Reading while tired on my part.

Can't speak for the '74's, but I know for a fact that although '75/'76 Lagunas came with the round gauge bezel, many had the idiot lights instead of small gauges (i.e. fuel, temp, volt). I've owned two of them. And, '75's with gauges either came with a Tach or Fuel Economizer gauge. '76's strictly Fuel Economizer.

Also, not all Lagunas came with that sport steering wheel.

As stated, '75's had unique upper door panels that had the S-3 badging. '76's had door panels with buttons as did most Malibus.

Folks are beginning to ask (and pay) a bit more for SS and Laguna. It would be wise for those of us with those cars to start paying attention to the little things, I guess.

It hasn't made much difference in the past. A 73-7 G3 was a 73-7 G3. Seems now that folks that had no interest in these vehicles ibefore are starting to pay attention, and they really seem to care if it's a "special" car.

I've seen several posts recently on other sites asking questions about them and the hater pool is either shrinking or keeping their yappers shut.

Good or bad, those of us with SS, Laguna, Can Ams, Hursts etc should start educating ourselves if we ain't already.
The Olds models (Hurst, 442) are already bringing 15-20+ k on Ebay.

I thought I knew quite a bit until I started looking around and realized I'd forgotten a lot about the differences.

Surprised a little to the time has arrived where faking a specialty model G3 could get you more $$$ than any other car.

Roadcaptain S3 wrote:Surprised a little to the time has arrived where faking a specialty model G3 could get you more $$$ than any other car.

Maybe it hasn't yet.  Let's see how long it stays listed.

On the other hand, if it has, I now have a super rare 1-of-1 Monte Carlo SS GT R/T R/S Limited Deluxe with EFI, ABS, O/D, and power-farking-everything!

I kinda hope not.
But this is the second fake G3 I've seen this month.

It must be working somewhat or they wouldn't make the effort.

I really don't ever want to see the day when guys on this site start arguing over whether somebody has a "real" anything.

Mine must be super rare. I have a '74 - '77 Chevelle/Malibu. Parts from all years increases the value greatly

Roadcaptain S3 wrote:
I really don't ever want to see the day when guys on this site start arguing over whether somebody has a "real" anything.

Roadcaptain S3 wrote:Surprised a little to the time has arrived where faking a specialty model G3 could get you more $$$ than any other car.

Maybe it hasn't yet.  Let's see how long it stays listed.

On the other hand, if it has, I now have a super rare 1-of-1 Monte Carlo SS GT R/T R/S Limited Deluxe with EFI, ABS, O/D, and power-farking-everything!

He's still at it, but he's cut the price way down and asking for trades as well.
He did stop calling it a Laguna for a while and added more pics, but recently changed it back. He admits (vaguely) that it's a Chevelle with a "Laguna clip"
If I had the space, I go offer him 1500 and take it for the parts.

The car looks clean, but why stop at the engine bay? At least soak it down with some superclean and hose it off. I can understand a dirty original engine, but this thing isn't original and someone at least tried to dress it up a little sometime in the past.

Agreed. Looks like all the focus went into the exterior. Price is more reasonable now, though the neglect for the engine bay and interior make me wonder what's under the paint...

I think the paint and body need more work. If you blow up the pictures, there is rust above the drivers door and the front and hood have some issues. I think you would be buying more issues than what it is worth.

I'm with ya'll.
I shiver to think what's under that shiny paint.
I figure since it's been sitting for a few months and the price keeps going down that folks who might have looked at it closely have taken a pass for a reason.

Yesterday at 8:41 pm by bucket

Yesterday at 6:41 pm by REVINKEVIN