Vinyl top trim was found, big thank you to Mcarlo77!

This thread can be deleted...

I've got the lower vinyl trim moldings that would run along the tops of the qtr panels and across the width of the trunk area (below the back window) for a full vinyl top. But, you mention the small qtr windows...are you also looking for those moldings? What about the moldings that surround the back window?

I've shipped all over the world...so, shipping to Finland is not a problem. Bigger issue would be fabricating a sturdy enough box so they don't get bent in transit.

You sir have a PM.

Mcarlo77 wrote:I've shipped all over the world...so, shipping to Finland is not a problem.  Bigger issue would be fabricating a sturdy enough box so they don't get bent in transit.

Steve Use the Pipe wrap Its flexable enough  to make it secure BUT strong enough to survive shipping its how my Wheel well trim was Ship with not one scratch The balck Pipe Insulation in Pics is what I mean ....And then put in a good Box like from Uhaul 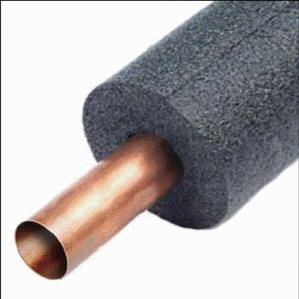 Foam pipe wrap is a great shipping aid. I use it around the perimeter of glass when I pack it for shipment. Problem as I see it on long moldings...the foam is too flexible to do much of anything to protect it if the box isn't strong enough to resist getting bent/folded. On relatively straight pcs of molding, I've used pvc pipe...and, even asked for any left over heavy duty, long carpet rolls from Home Depot's carpet dept. Ain't nobody going to bend those in half during shipment. If the arc of molding is too great for these (like the corners on these vinyl top trims), I've found that fabricating a three-sided (triangular shaped) box offers much more rigidity than a conventional rectangular box because of the added force required to bend a formed corner rather than a flat surface. That, and doubling the wall thickness of the cardboard box haven't failed me, yet.