Just saw this on Craigslist. It's a nice car but in an interesting color!

Beautiful car! I'd like to know more about that color blue...and, what the cowl tag shows as GM only used 2-digit codes.

Vinyl top must have been added as it looks too thick/padded and the qtr window moldings are missing.

Nice color. Top was certainly added maybe at the dealer

Very nice Monte! Love the color combo. I noticed the lower seat belt retractors are mounted almost on top of the sill plate. Is this factory or a mod? Never seen that before. I had a 1976 El Camino with a power bench seat and the lower retractor unit was mounted under the rear seat mount just like a conventional seat. Here's a picture for reference. 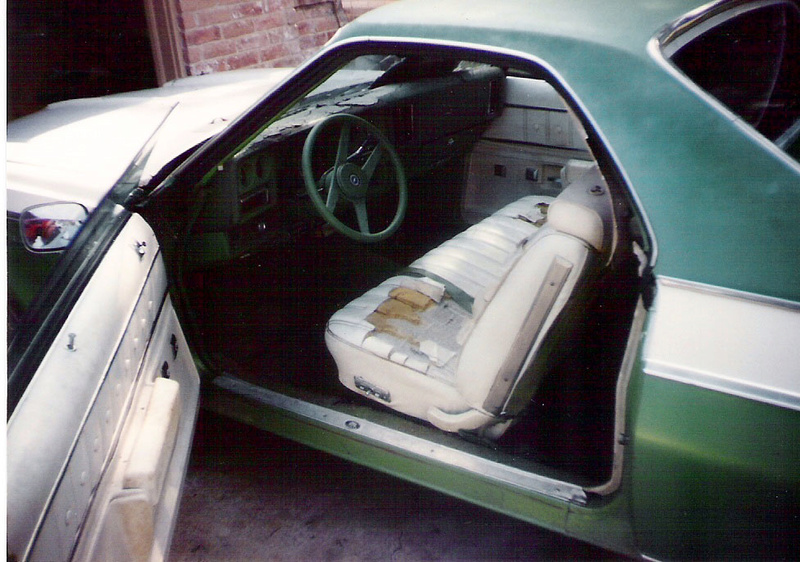 Noted from an earlier observation....... is no opera window trim. What about the chrome trim outlining the vinyl top ?

Also , notice behind the seat belt retractors there is a hole in the carpet on each side approx. 8 inches behind the retractor.

Someone has also put an extra screw in the upper portion of the upper door panel.

I had a 77.....many years ago. Dont recall the seat belt retractor in that location.

Light Blue (21) was not available on Chevelles and Monte Carlos in '77. I'm not sure how strict GM was back then, so it may have been available if you know the right person. Not sure what "Lumbard Blue" is, but that isn't what GM called it.

My '77 seat isn't power, but the retractors are mounted under the seat like the others pictured. I'm not sure how it would work between the door and seat hinge. I can't see there being enough room to fit. Both sides are like that though. Any Montes out there that are similar?

Yeah...something is odd with those seat belt retractors. NEVER seen anything like that on our gen of cars. That's the same style GM used on previous gen cars; although, those cars didn't have roof mounted shoulder strap retractors. I'm guessing aftermarkets. And, yes...power bench seats had the floor retractor underneath the rear outer seat track leg like mentioned; EXCEPT, when it was a split bench seat. Then, they mounted a retractor behind the seat; like with the swivels (but, not the same style as with the swivels).

Something seems odd with the paint, too. The door jambs and inner door frames seem to have a dull finish...as though the car was repainted and only the exterior received the buffing treatment. My factory paint on the Monte has the same glossy finish in these areas as on the exterior. That's why I mentioned it would be interesting to see the cowl tag info. He mentions it's one of seven. Along with the added vinyl roof and unusual belt retractors, I'm guessing it's been repainted for some kind of company promotion or advertising venture (think Mary Kay; only on a much smaller scale). Those numbers he references don't show up on any GM model color chart. 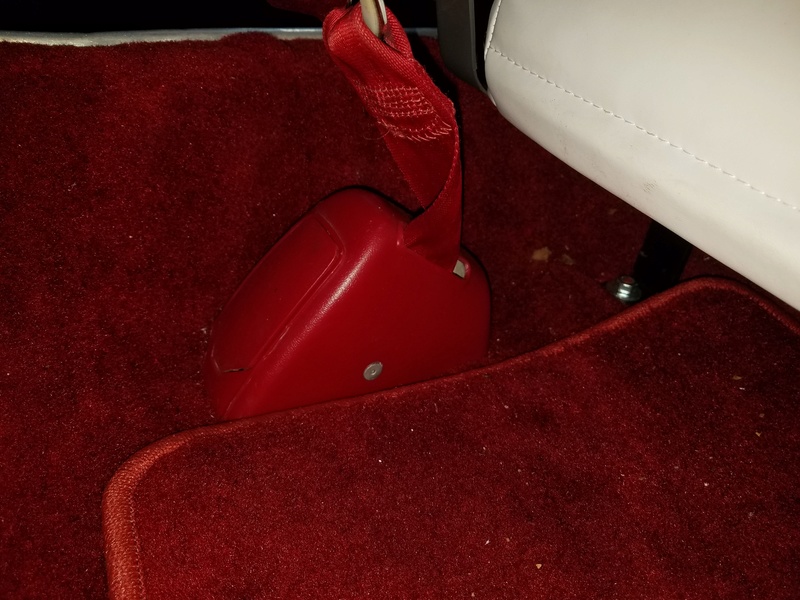 Think you might be on the right track with the belt retractors, Robert.

BTW...what is that switch/gauge on the underside of the dash (below the headlight switch)?

I believe the gauge under the dash is a compressor control switch for air shocks.

I know we are picking this sweet car to death, but it looks like the drivers side seat belt buckle is tan/saddle.

When I was searching for a replacement center seat belt I found many cars in the junkyard that had mismatched color belts on the inside belt. Originally these belts were inside the plastic housing. I'm guessing that they only worried that the plastic housing matched the interior.

I wasn't intending to pick apart this car. It's a very nice car! Just noting some of the unusual things done to it...more for reference than anything else.

Regarding the belts, it's absolutely correct that inner belts hidden inside the plastic sheathing were random colors. Guessing the supplier used their leftover odds and ends on these belts to minimize waste/cost.

I emailed the seller and he stated that it was repainted years ago the factory color. He also stated that several people have questioned the top. He said he was unaware that is was missing the window trim, but has since found a set. I asked again about seat belt. I don't think he has changed anything on the car since he has had it.

Should have asked him for the cowl tag info.

He may find the reason the qtr window trims weren't installed is because it appears to me the vinyl top is too thick/padded for them to fit. It's definitely not a factory top as they had a seam down the middle at the top.

Seller replied that the top was replaced along with the repaint.

Also, he has no knowledge about the seat belts.