I decided to do a little bit more preventative maintenance before trying to get the car running. Things like belts and thermostat. I also removed the smog pump for two reasons. One, the air injection lines are gone from the passenger manifold already, two, the pump was very tight like it was about to seize up. The removed parts are not getting trashed, just stored away in case they are needed in the future.

The engine block stamping says that the car still has the original engine: 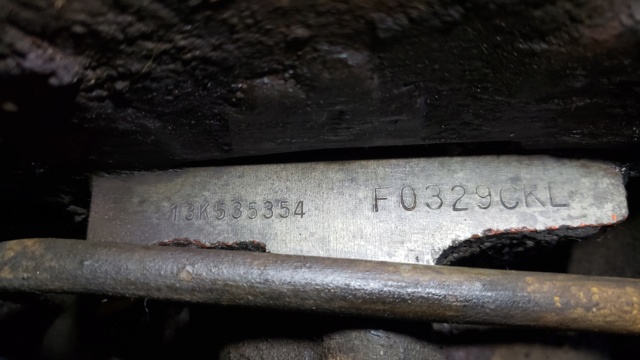 I got the carb back on it, replaced belts, replaced the thermostat and put a battery in it. It's almost go-time. 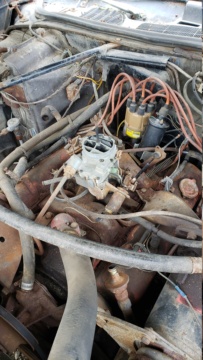 After filling the fuel bowl, the engine fired right up and ran very well. Not bad for sitting over 2 decades. Soon after, the alternator started locking up, so I replaced that. After checking for operational brakes, the trans had no problem going into drive and reverse. So I took it down the road and back. Such a nice feeling.

After it's first time on the road in nearly 25 years. 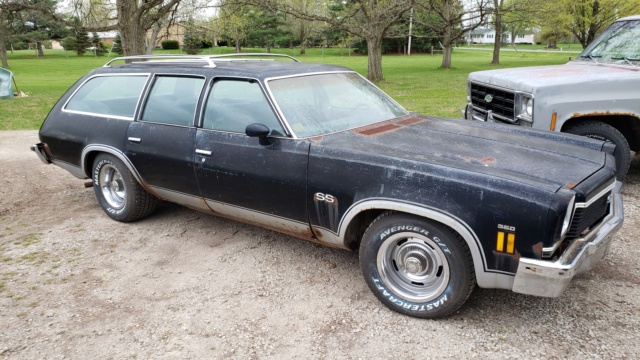 Later I cleaned up the interior a bit. 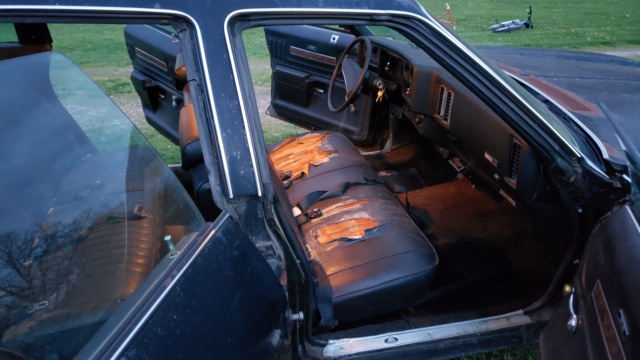 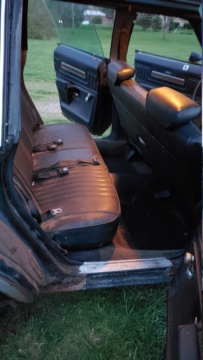 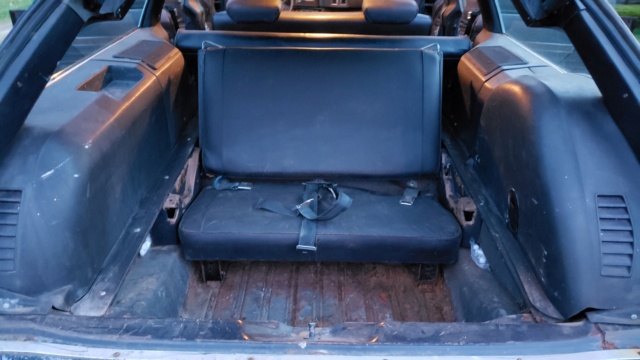 Today I buffed the original paint. Well, mostly original paint. At some point, there was a repair to the LR corner and they blended the paint into the tailgate, quarter and rear pillar. The silver lower stripe was masked off, so it is still original. 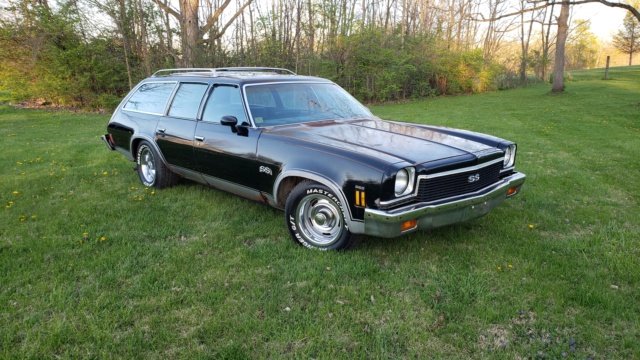 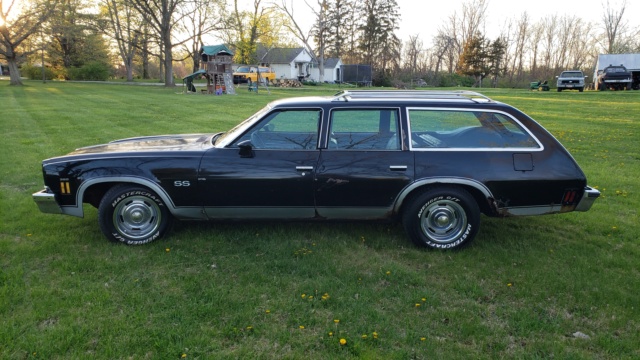 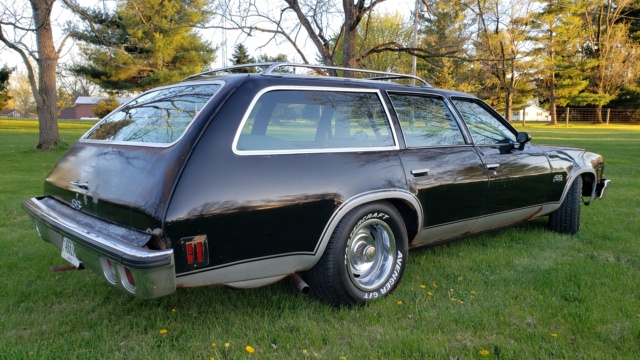 Awesome! Another G3 coming out of a long hibernation! Looking good!

After driving the car, it quickly became apparent that the rear shocks are completely seized. There is zero movement on them. Also, the master cylinder must have been seized at first. It took a lot of pressure to move the brake pedal on the initial hit. It was stuck and suddenly broke free. Then it kept sinking to the floor. It doesn't lose pedal anymore, but the pedal is very low. Each time I move the car, it gets slightly better. I also forgot that I found a bad choke pull-off when I went through the carb. And finally, the fan clutch is shot.

That thing will be a head turner when you get it road worthy. Just noticed on one of your photos that it has the 3 row seats. I though all station wagons with the extra seat had the rear vent windows??? Was that factory installed or do you think it was added later? 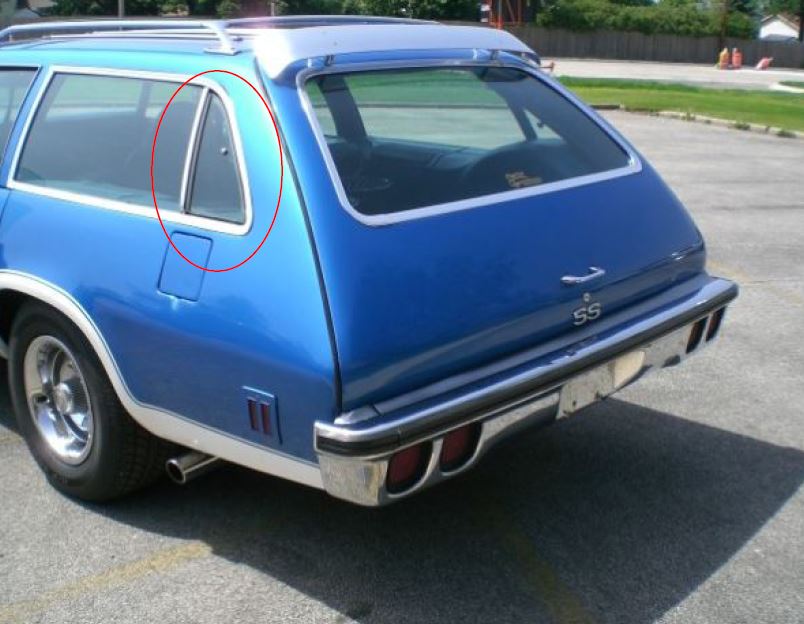 This is neat. I see that the Laguna wagons got the rear vents standard with the third row seats. It shows the SS with them but it doesn’t mention that it’s an option.

The lack of rear wing windows was something I wondered about before I bought the car. Best I can tell, the rear seat was added earlier in the car's life. The plastic side covers next to the seat bottom were originally tan and have been painted black. Also, there is no carpet in the rear footwell and it's just trunk spatter paint on the floor. My guess is that 3rd row seating cars would have carpet with just paint/sealer on the floor? I'm also assuming the rear seat should have had some kind of stitching pattern in it. But these are just my guesses.

Also, since the car still wears it's original striping that it left the factory with, I'm going to try and get good pictures and measurements showing exactly how the striping should look. I've seen some repainted cars online that seem to have a slightly incorrect stripe layout.

bucket wrote:The lack of rear wing windows was something I wondered about before I bought the car. Best I can tell, the rear seat was added earlier in the car's life. The plastic side covers next to the seat bottom were originally tan and have been painted black. Also, there is no carpet in the rear footwell and it's just trunk spatter paint on the floor. My guess is that 3rd row seating cars would have carpet with just paint/sealer on the floor? I'm also assuming the rear seat should have had some kind of stitching pattern in it. But these are just my guesses.

Yeah, it definitely sounds like the seat was added. I remember reading here on the forum about the side vent window on wagons. It's probably been a few years back but they mentioned that when you see the vent window installed you know that it has the rear seat. Anyways, these are just cool cars regardless. I hope to land one of these prizes in the next year or so when I'm done with the Hurst Olds resto.

From what I remember in my reading, the rear wing windows were standard with the 3rd seat option, but were available as a separate option too. I think. My interest in Chevy Celebrity wagons may have tampered with my memory.

After driving the car around a few times, I decided the exhaust needed dealt with. It sounded like a crappy old beater car and it was kind of embarrassing. My original intent was to repair the single exhaust that was on the car, but the y-pipe turned out to be smashed, broken and rusted very thin in areas. With my main goal of fixing the exhaust and getting the car back on the road quickly, I chose to install headers (had a couple older sets already) and a pair of duals. I bought the parts I needed to get the exhaust to the axle, the final step will be to have a local shop bend up some tailpipes to have them exit where I want. 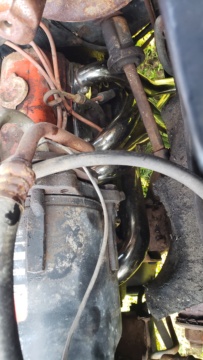 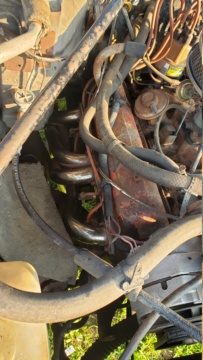 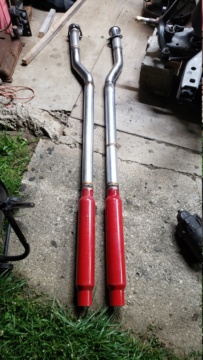 Layout under the car, before hangers were installed: 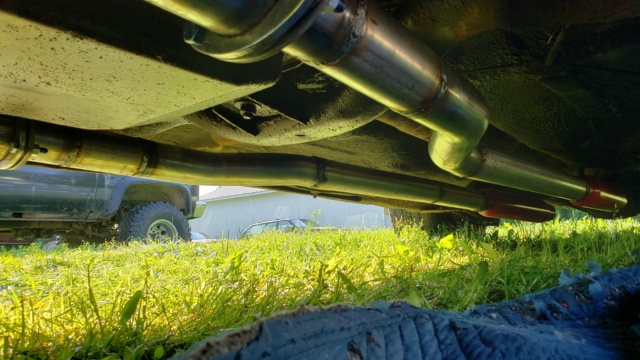 All cleaned up and ready to drive to a local cruise-in: 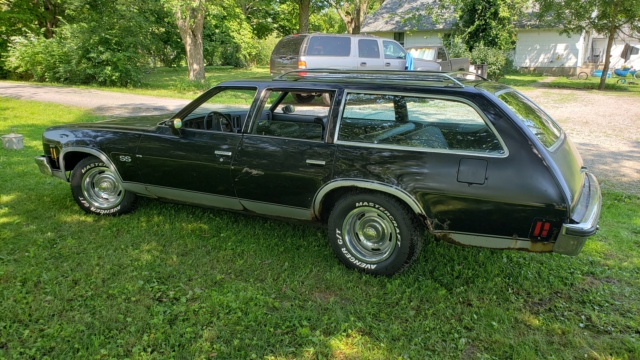 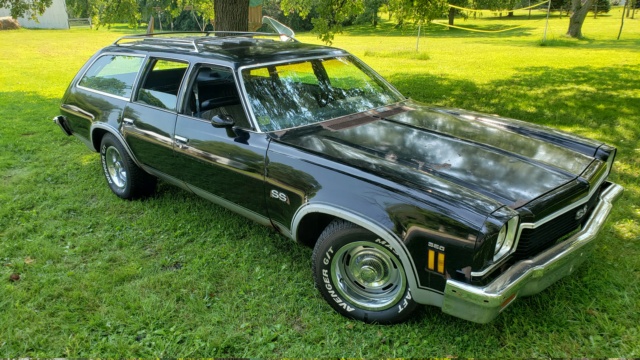 The cruise-in was a lot of fun. Some people recognized what an uncommon car it is, a few people just thought somebody stuck SS emblems on an old wagon. I was surprised at the amount of people that said they appreciated me getting the car back on the road and showing it off just as it is. Apparently despite all the rust, originality is still a cool thing.

bucket wrote:Layout under the car, before hangers were installed:

bucket wrote:Layout under the car, before hangers were installed:

Hey you were Parked by a Red Supercharged Malibu ??  Friend of Mine made the Hour drive to the Show I dont know if he had his Blue white striped Laguna though ??

Yep, that's where I was parked! And yes, he had his Laguna there too! When I got there, I walked over to see his car and talked to him, he's a real nice fella.

Tail of the dragon is fun, I've been through there countless times over the years, but it was usually in a minivan, lol.

All the times I was near the red one, I never saw the owner there. I usually don't get all giddy over LS swaps, but that was a nice one and I'll bet that's a real fun ride too.

Yes, Tail of The Dragon is the most fun you can have without getting arrested. Did it back in 2010 with a bunch of buddies on bikes. Would love to get a bunch of guys together here on the forum to do it again in our G3's. That would be an awesome road trip. 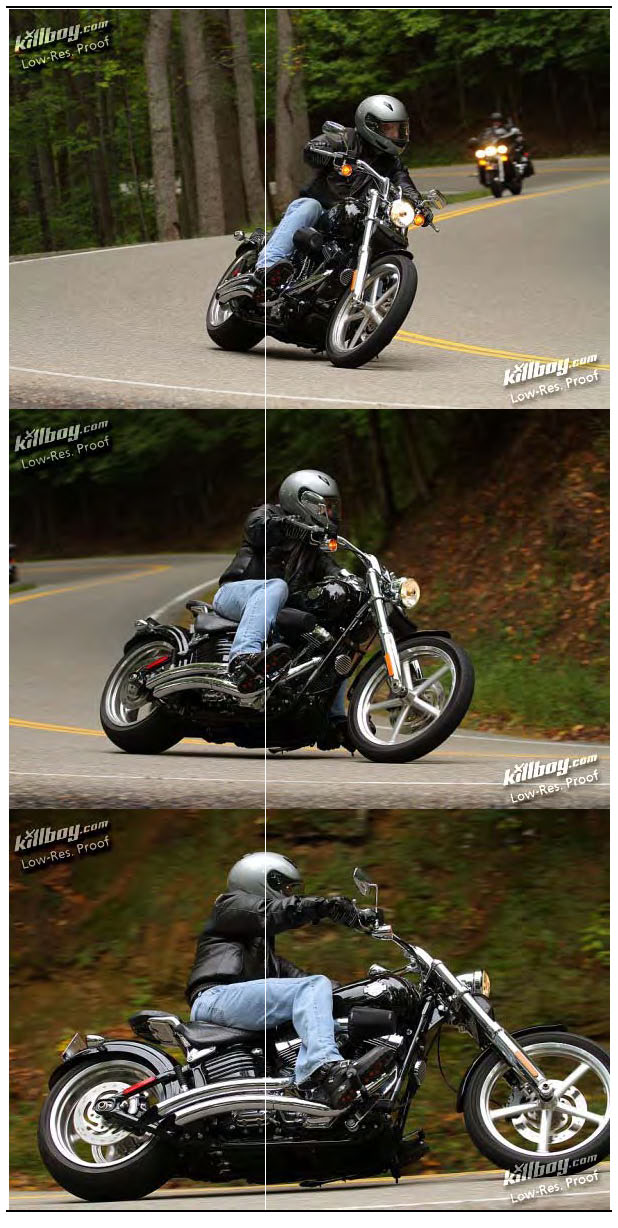 Well it rained off and on this evening, so I didn't get to go to the cruise-in. But, I did dial in the tuning finally. I'll drive it to work tomorrow to see if my tip-in stumble still remains. Last night I messed with the timing and idle mixture and the stumble became less severe, and did not happen as often. Tonight I ran a full 12v source to the coil/distributor, after researching what the old Accel distributor wants. It seemed to help the idle quality, which was already good to begin with. I'll drive it tomorrow to see if it helped the issue with the stumble.

I did also get around to remounting the rear view mirror. 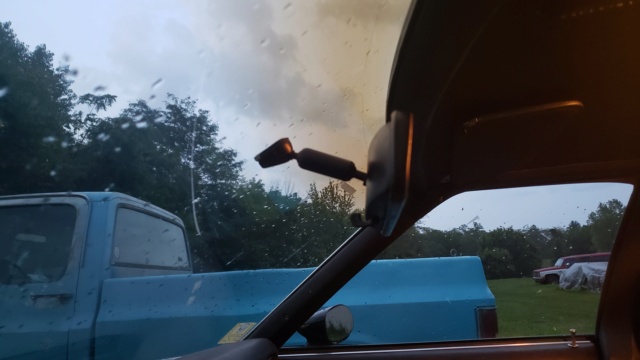 A couple days ago, I drove the car into Columbus, then out to Springfield for work. I think the car is officially "on the road" again since the late 90's. 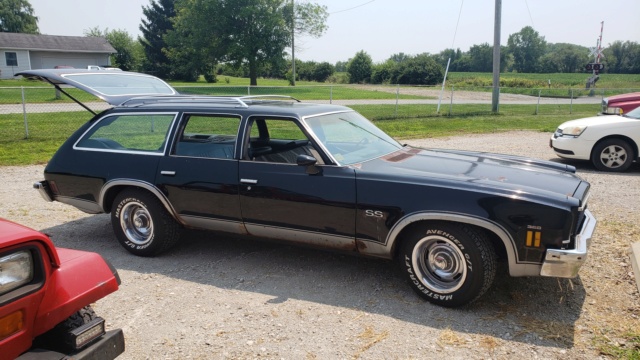 The wagon is looking good! Those wheels are perfect for that car.

Oh and because I know there's some truck enthusiasts here too, here's a small sampling of the family: 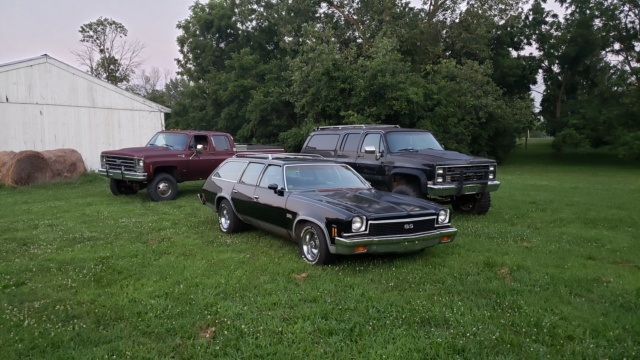