I have just joined this online community and I have to say I’m very happy to have found you. As opposed to me asking all the usual new questions I have read some discussions and let’s see if I have absorbed anything!

The build is a 75 Malibu Classic. Fairly good shape but of course with our weather the closer I look the more rust spots I see hiding. So first job is rust removal. I’m pretty good with bodywork.

Wheels and tires. Sounds like 295/60/15 are the norm, but man that looks tight. I have read I need a wheel with 4.5 backspacing. You sure this tire will fit! Unfortunately not a common wheel and tire so quite expensive.

Brakes - brake light is on and no fluid out back breaks, I’m told I need an oil distributor things. I can see it and looks easy to replace but famous last words.

I can get performance disk breaks but sounds like the drums are what they are. Any favorite parts suppliers?

I’m told the TH350 should hold up
Okay. The gears are 2.73 which will do though I’m not educated on what I would lose/gain going to 3.55 or similar.

Lights I’m going to see how the new LED’s look all around.

So do I have things basically surrounded? There are always suprises that are unforeseen. Any advice or thoughts would be appreciated. Thank you

Hey. Welcome aboard. Looks like you have a big to-do list. A couple of questions, you have a big block in it now, right? How do the front springs work with that? On a project as big as this you might want to start small and finish with the 454 install. I am not sure what an oil distribution thing is but getting brake fluid to the rear needs to be fixed first. Just rebuilt the drum brakes in the rear and see if the front needs new pads and hoses. Make a list, 1-10 and let us help you work through it. You can get a good running car without spending a great deal of money. There is a lot of good info on here about tire sizes and suspension upgrades so you definitely have come to the right place. Good luck.

Welcome to the group Digger. This is a place you can find all kinds of good info about these cars and how to fix, and improve them.
I've owned my 75 since the spring of 2016 and have done a lot of upgrades to it since. I've done at least one project each spring since and looking at my car one would never know what ley on the under side.
Your question about 295's on the rear is a good one. I have 295-50R/15's on the rear, and 245-60R/15's up front. The wheels are 15X7 up front, and 15X8.5 out back. The back spacing is 3 3/4" on all four. I have no problems with clearance on mine.
On the springs, I installed used 94-96 Impala SS springs on all 4 corners and KYB shocks all the way round. It lowered it about an inch over stock.
The sway bars are bolt in as well. The front is a 1 1/4" from a later 70's Trans Am with the WS6 suspension package. The rear is a 1" bar from a 94-96 Impala SS. With these parts my car handles rather well and can stay with some newer cars in the corners too. Of course the newer cars handle better, but they can't run and hide. haha
Now for what I think is my biggest and best improvement on my car. The Brake swap. Here's a link to the details on it.
https://www.g3gm.com/t12589-my-four-wheel-disc-brake-swap
I will be doing the bodywork and painting it in the next couple of years, but until then I will continue to drive the wheels off of it. So far I've racked up over 30K on it and have loved every mile. 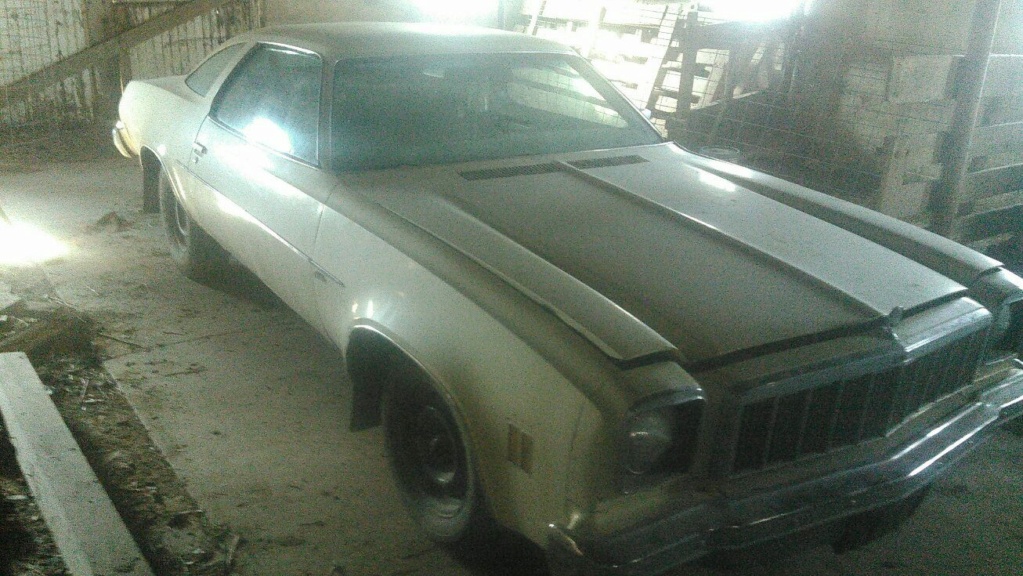 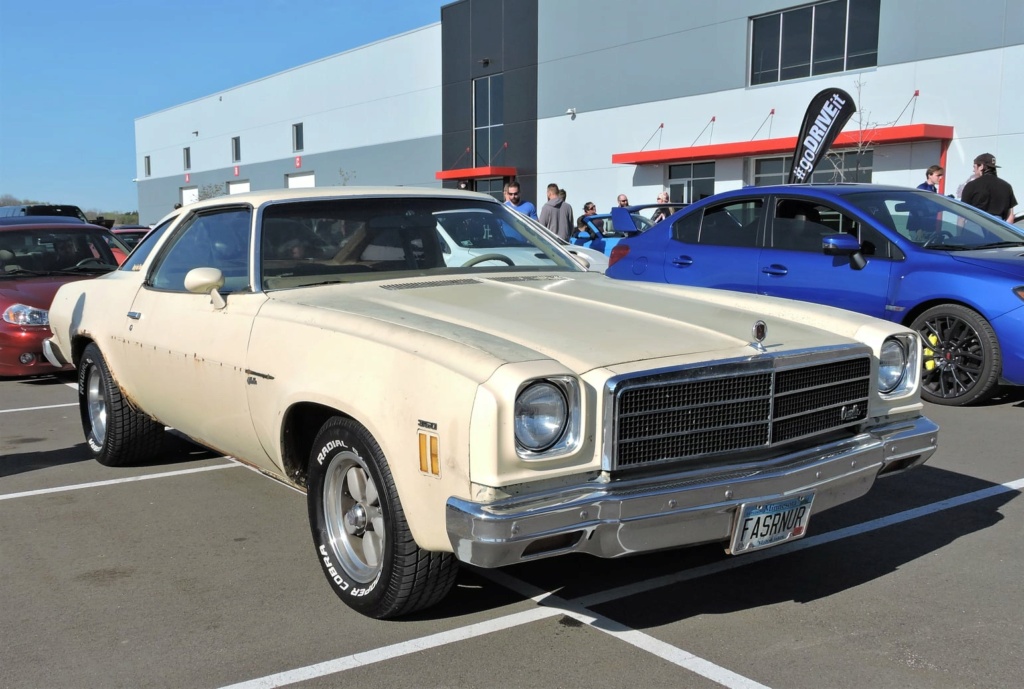 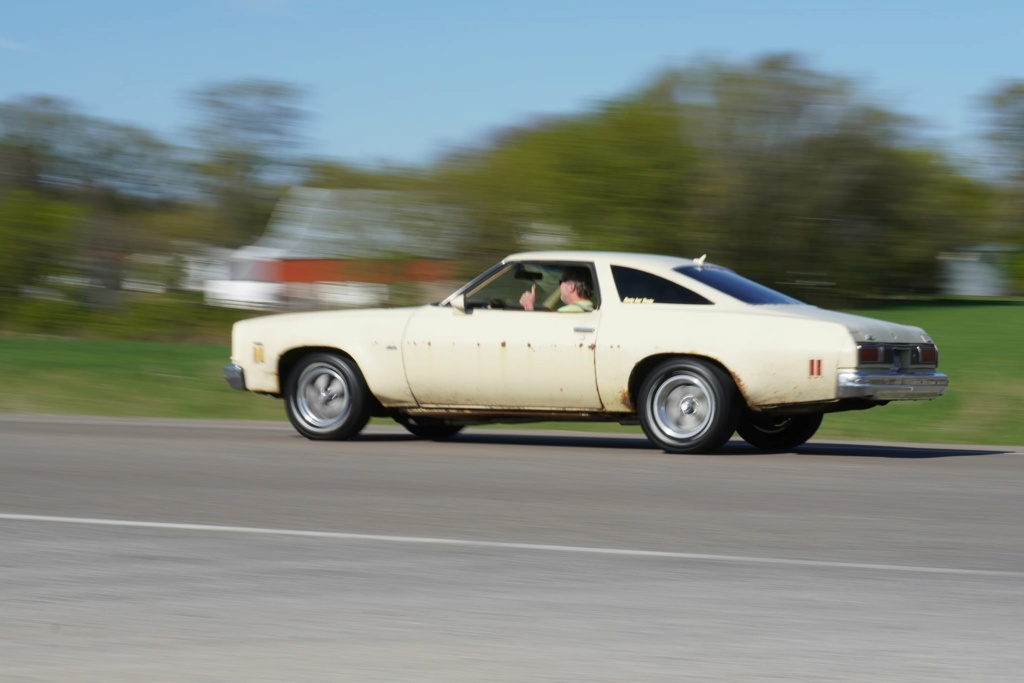 Welcome! This is a great place to get information for the "forgotten years"!

Welcome Digger! Great to see a newbie from the Great White North. You've got a great list up upgrades for your 75. We'd love to see pics of your ride as well as the upgrades you do along the way. Also, I have to concur with Fasmur on the tire sizes. I had 295/50/15 tires in the rear and 255/60/15 tires in the front with no clearance issues. On the rear brakes, it sounds like the flexible brake line that connects at the rear axle is corroded and plugged up. The best way to fix that is to just replace the flexible brake line. Hope this helps. Looking forward to your future posts. 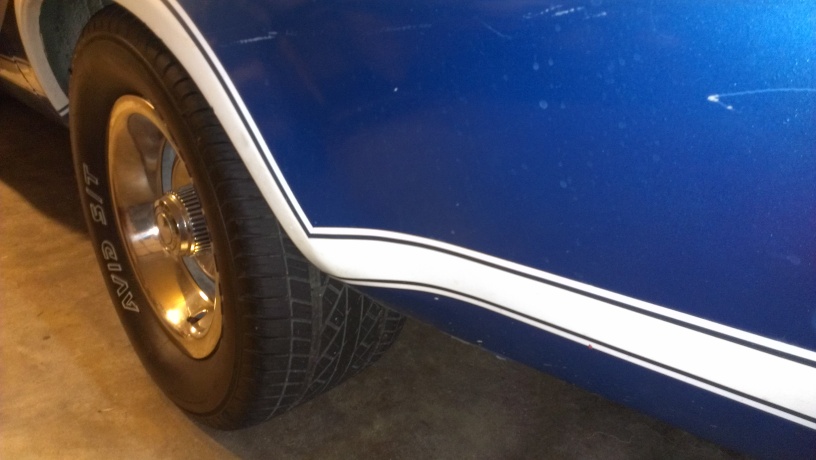 In 1981 When I was 16 my dad took me to look at a car, I had 2,000 in my pocket from summer earnings on the end of a shovel. We pulled up in front of a 77 Cutlass Supreme with 350 rocket engine. I was pretty happy until I seen the other car he had for sale. A gloss black Chevelle Malibu Classic with a monstrous 454 under the hood. It was way down on horsepower but speed was relative. I got the Malibu.

Up here rust is always an issue. I finally found one in good shape and funny enough it is the same color as fasner .

I’m not a traditionalist, just want it to work and have some fun. No question the 396 has to come out (sold already) and built 454 going in.

This car runs well but I just have to swap it!

Great news about the tires, I was off on one number (60). The dash brake light is on and I’m told it is the proportioning valve aka combination valve.

Despite looking for a good one, I just took of the trim and screwdriver went through the metal in a couple places. So that’s the start.

Here’s is a weird thing. I bought led lights to replace the 1157 bulbs to try them out. Because the LEDs work faster you can get sequential tail lights by running one led and one old 1157 bulb. Other than that I don’t think the less are worth the money.

Hey. I have done the LED lights on two of my projects. Don’t waste your money on those. You will have to wire in some resistors to slow down the blink rate back to stock.

On the proportioning valve, check your wiring before you take that out. Like ole g3 said, replace the flex part in the rear of the brakes and make sure you don’t have any leaks. With these two things you might have the light on the dash figured out.

With the 454 you would enjoy a .308 or .342 gear set with a posi unit. Is the 454 stock? Do you know the year or generation of the engine? If it’s a stock peanut port engine all that you need is stock exhaust manifolds and a simple 2.5” dual exhaust. What carburetor do you have?

I’m not good at mechanics but I find it interesting. The LEDs are not impressive, no. I’ll look into brakes suggestions of course thank you.

Now I’m over my head on engine specs but I’m told this is a Gen 4 454 that was built to produce 450 to 500 horsepower. It has a Holly 650 carb and performance wiring. I will have to have someone knowledgeable do the installation.

Digger wrote:I’m not good at mechanics but I find it interesting. The LEDs are not impressive, no. I’ll look into brakes suggestions of course thank you.

Now I’m over my head on engine specs but I’m told this is a Gen 4 454 that was built to produce 450 to 500 horsepower. It has a Holly 650 carb and performance wiring. I will have to have someone knowledgeable do the installation.

It looks like you and Limey have similar plans. Take a look at his build thread. I think it will be some really useful information for you.

Hi and welcome. It sounds to me like your proportioning valve has been tripped, likely because there is a leak in the rear brake assembly somewhere. The valve funktions this Way that it close the part that has a leak so you can limp home. This is why the light is on to warn you that there is a brakeproblem. Fix he leak and bleed the brakes while you push the little button in. Its located under the rubber boot on front of the proportioning valve. This will reset the valve and the light will go out. If in doubt check how to on youtube. Good luck and once again welcome.

Good luck with the combination valve. What a pain in the A$$. Mine tripped. Could not get the button back in. I replaced it still could not get to bleed,used the little tool to center the shuttle, light was off, still nothing. I think. Something (crud or debris) from the valve was in the line. Ended up taking to a shop,replaced the line to the back and wheel cylinders,again,it worked.

That’s great information on the valve. What I did was too completely eliminate the valve all together. I ran all new lines and installed a proportioning valve by my master cylinder. Here’s a picture of my setup. Get your post count up so you can post pictures. I think you have several real veterans that want to help. 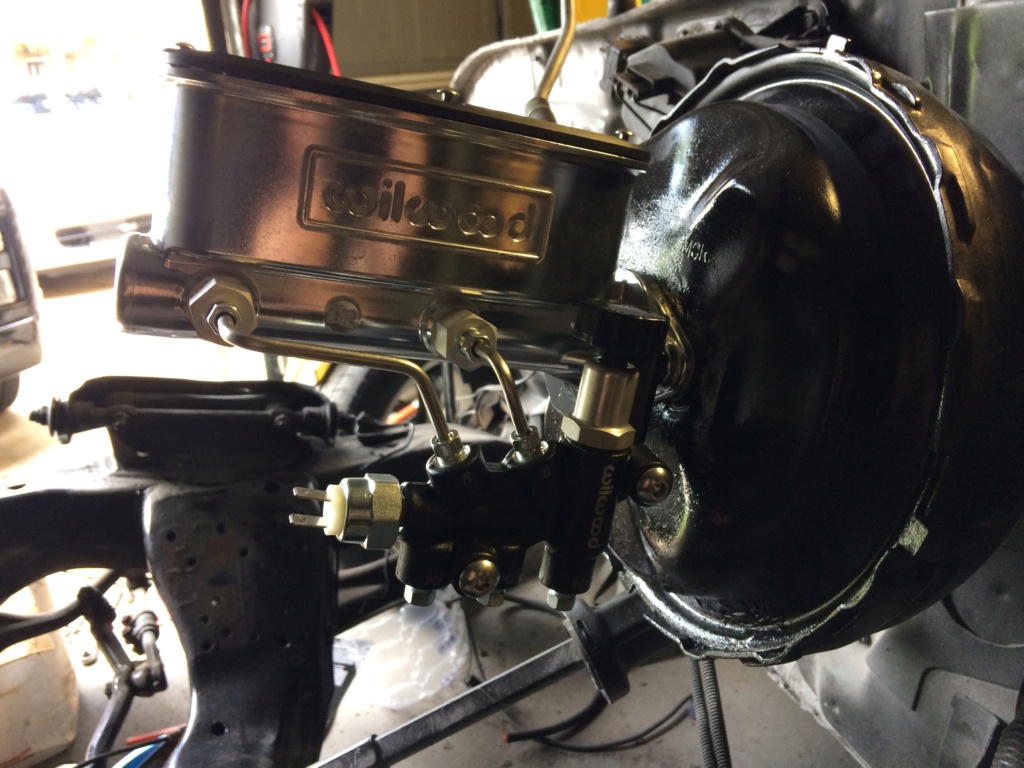 I have been trying to read appropriate threads, but just to respond. I see where a brake line is leaking and the proportioning valve found but I have not followed up yet. I’m chasing rust still.

My 75 stock with worn suspension does seem to handle like the SS Minnow in stormy seas. I have chosen to go the route of lowering springs and new shocks/sway bars, bushings. I understand their are certain parts better than others but I’m not sure I can go chasing these. I’d prefer one stop shopping. Do you just order Impala springs off Rock Aoto or equivalent?

front sway Bar = Trans Am second gen
rear sway (need control arms set up of sway bar also) Impala 0r 9C1 optioned Caprice or Impala
Springs can be Impala
Front Spindles can be Upgraded to B Body spindle to gain larger front brakes
Shocks I believe have to remain specific to Model i.e. Chevelle Cutlass of 73 -77 I dont know of which Interchange from other Platforms
Thats Just off top of my head
___________________________________________
1977 Chevelle SE x2
One Mild original
one Wild NON original
Anthony