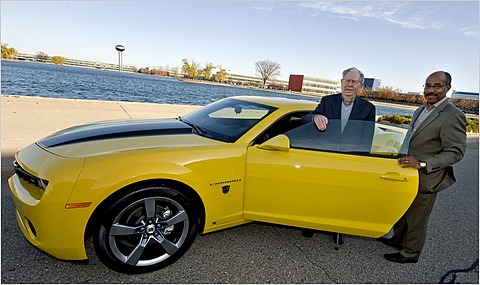 Eight months older than General Motors, Virgil Coffman clearly is not whom Chevrolet had in mind when it decided to bring back the Camaro.

But a bright yellow, 426-horsepower Camaro SS is exactly what Mr. Coffman, who turns 102 in January, wanted when he went to a Chevy dealership near his home in Decatur, Ill., in September. He ordered a “Transformers” special edition model, which is adorned with black stripes to resemble the character Bumblebee from the blockbuster movie.

Mr. Coffman hasn’t seen “Transformers.” He said he just liked how the special-edition Camaro looked — and that only 1,500 are to be produced. He traded in a Chevy Monte Carlo for the new car. “Driving by myself, I didn’t need one of those big cars anymore.” he said. “I wanted a sportscar.”

After learning of Mr. Coffman’s purchase, G.M. flew him to Detroit this week to show him around a design studio and its Heritage Center, a museum filled with hundreds of cars it has built during his lifetime – and, of course, get a little publicity for one of the company’s hottest-selling cars.

Mr. Coffman worked for G.M. from 1950 until 1973, first making bumpers for Cadillacs and later as a chemist. He has owned 35 to 40 different vehicles — mostly G.M., none foreign — starting with a “1920-something” two-door Chevy coupe. This is his first Camaro, and he says he likes it the best.

“The way it looks and the way it handles — you can’t beat it,” he said. “People you don’t even know come up and talk to you in a parking lot.”

Bob Lamb, a nephew who accompanied Mr. Coffman on his visit, said the sales staff at Miles Chevrolet was a bit skeptical of a 101-year-old man who came in looking for the $38,000 Camaro but more than happy to make the deal when they realized he was serious. “He told me, ‘If I keep that 10 or 12 years, it will be worth about $100,000,’” Mr. Lamb said. “He’s very optimistic.”

Since September, Mr. Coffman, who has outlived his wife and three children, has put about 1,800 miles on his new car, though he has yet to take it more than about 50 miles outside of Decatur. And while he loves the powerful V-8 engine, he keeps his speed down — most of the time.

“Once in a while I like to kick it up,” he said. “But I’m afraid to drive too fast and get a ticket, and then they might take my license away.”

That's one hell of a mid-life crisis!

great.. now the new Camaro will be known as an "old guy" car..
if you are in the same area as him, it should be easy to find the guy- just look for the yellow and black Camaro going 45 in the fast lane with the blinker on..

Similar topics
» Forty years ago today
» Gardening for many years in different ways. Starting to try SFG!!
» New Years Eve Activities at Walt Disney World
» Crossbow Books
» What to do if you plan to move in the near future?