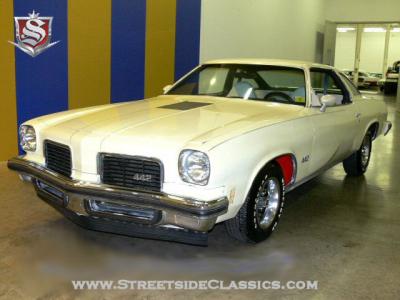 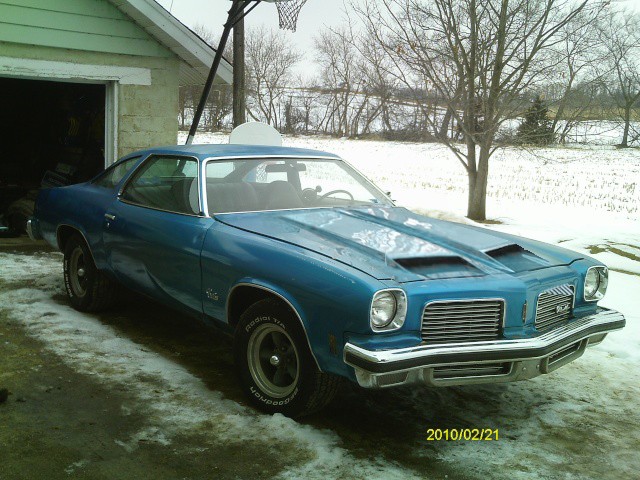 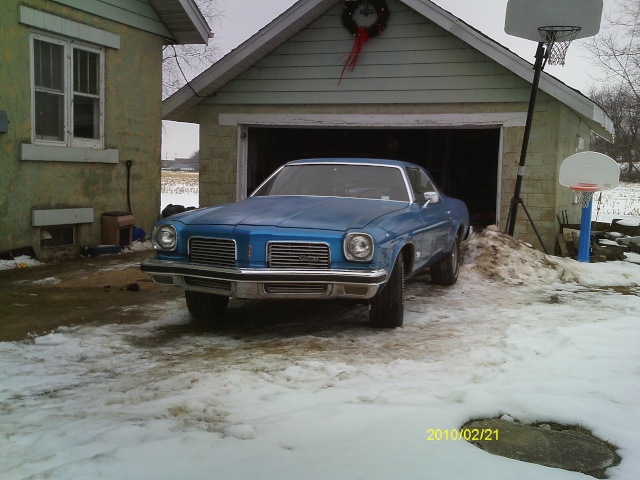 Don't know why...I'm just not a fan of air scoops on these cars.

LOL, you're welcome 74442guy. I don't like the 75 442 hood, but the ram air looks alright. Either stick with the original or go ram air. Add the original to the poll. For some reason, I got a feeling people are voting for the 75 hood thinking that's the original one.

I vote for the scoops.

Scratch that. forget the hood & focus on making it launch like this:

I WANT TO CHANGE MY VOTE TO GIVE ME BEER CAUSE NOT AVAILABLE WHEN I VOTED!!!!!

the fiberglass looks good on the 76 and 77 cars.

stock hoods are really to boring.

have a beer, sit back and look at the bad a$$ car after this dang pole is over..

Limey wrote:no you just need the right combination of the right power adders dump the torker go with the performer, dump the street tires go with drag radial etc etc

Screw the Performer intake! That's not much beeter than a stock replacement. Torker is so-so, but get into this decade. 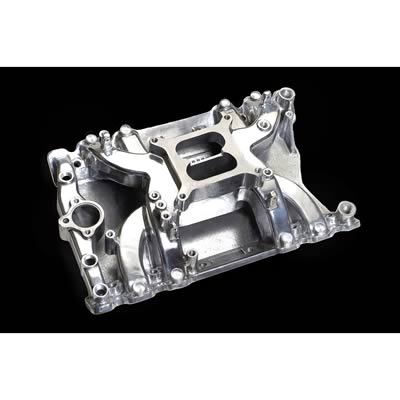 It's the intake I had planned to use on my 455 before times got tough. Lunati also has a Voodoo cam out for Oldsmobile. Newest cam technology available & designed for Olds, not a Chevy grind fitted to an Olds core. At least that's what I hear.

IMHO, I think the Torker is softening his launch right now. Nothing is really wrong about the Performer, except he doesn't need to add low end torque. Judging by the traction problems, big cam, & deep gears a Torker or the Crosswind would be better suited. I like the fact that the Crosswind is new technology & is the ONLY high rise dual plane intake made for BBO motors AND it's an Airgap design.

Rago wrote:IMHO, I think the Torker is softening his launch right now. Nothing is really wrong about the Performer, except he doesn't need to add low end torque. Judging by the traction problems, big cam, & deep gears a Torker or the Crosswind would be better suited. I like the fact that the Crosswind is new technology & is the ONLY high rise dual plane intake made for BBO motors AND it's an Airgap design.

I used to visit this site when I had an olds powered car. There are lots of neat little tricks to improve reliability and oil control.

Olds FAQ, even though it hasn't been updated in close to ten years, is a great place to check around for info.

To answer your question Limey, the Torker is a single plane, it's just outdated. If you want a single plane intake, you might as well go with a Victor intake. Of course, to get the most from it, you gotta fix the oiling problems & strap down the caps with a halo. Then there's the huge main journals to deal with.....

I really don't think the Torker would stand up to the Crosswind on either end of the scale. Look at all of the testing that's been done with the Performer Airgap stuff & how it always ends up within one or two horsepower of the single plane it is stacked against, but makes more down low. The Crosswind is basically the same thing. Here are a few things to consider:

1. The Crosswind is a high rise dual plane intake, the Torker is a low rise single plane.

3. The Crosswind has a nice air gap to supposedly keep the intake charge cooler.

Crosswind is a little cheaper at Summit Racing. Let me look around & find a better deal. I thought you were talking about your build?

If I were him, I stick it out with the Torker for a while. First take care of the traction control, then worry about more power I'd say.

Holy crap, I just made addict! Five stars for me beeoootch!

Rago wrote:Holy crap, I just made addict! Five stars for me beeoootch!

Bigger meats out back, drop the front sway bar & get some 90/10s when he goes drag racing or better yet, get adjustable shocks front & rear to dial in the suspension. There's different methods of thinking on stiff springs vs soft springs, so I'll leave that can unopened for the moment. I'm sure there's other things like trying to distribute weight as far back as possible & such. What were y'alls thoughts?

Rago wrote:Holy crap, I just made addict! Five stars for me beeoootch!

Similar topics
» Tomato Automators
» fertilizer boost opinion
» My Preciouses... Introducing the Silhouette Cameo Digital cutting tool
» need your opinion on boxes full of weeds
» Looking for volunteers to eat and give your opinion………