I just scored a running S-10 extended cab for $726. She's solid, straight, & has leather seats. That's the good stuff. On the bed side of things, the stereo wiring needs completely redone since the PO has wires going everywhere, the driver door handle is broke, windows are off track, & worst of all, it's several different colors, among other small problems. Since this isn't G3 related, it's in the OT section. It's already been spray painted on & I ain't dropping much money into an old work truck, so I've decided to get a few cans of primer (or flat color), some sand paper, & bring some buddies over with a couple of 30 packs for a priming party.

No flaming on the spray paint part. I know it's wrong, I know it won't look great. It's cheap, easy, & going on a POS work truck just to make it one solid color. I'd like to find some bright flat red, but it seems impossible. Probably going to lower it & the Vette wheels have already been transferred for the moment. What's a good color choice from the ones I've got listed? Grey primer is out, just not into it. As always, I like opinions & thoughts.

Ehh. Not really my style, but I was thinking of either maroon, bright red, or tan & doing the bumpers & trim pieces in satin or flat black. The Vette wheels look purdy good on there, so this gives me an excuse to give Brown Eye a new set of shoes. I'm hoping to keep the total cost involved below $1,000 on this truck. Not like it's gonna win any styling or speed contests & I doubt that book values will ever soar on an S10, LoL.

If I could find bright red cheap enough in stores I wouldn't even be debating the color, but I ain't paying $8 a can for high temp VHT red. I'm thinking minimal effort without looking too cheap around $3-4 a can & some wet sanding to smooth things out. Right now the truck is red, turquoise, & blue all shining through in spots covered by really old spray can black primer.

Any photos of this amazing vehicle?

LMAO! I ain't wasting the time to take a pic as it sits. Maybe once it's all one color.

You should probaly just paint it rainbow anyway.

Why not? Make it look like a NASCAR truck with all the fancy stripes and two tone colors. Be forewarned tho, If Johnny Huggins, or whatever his name is, sees it he will cancel your subscription to PHR. JB

I agree. Make sure you stick with pastels though. Really screams "RAGO" ya know....

74Malibu383 wrote:I agree. Make sure you stick with pastels though. Really screams "RAGO" ya know....

I'd rather stick with what I got than that crap. Rainbow flakes & pastels need to stay in the 1980's where they were forgot about by most of us normal people. 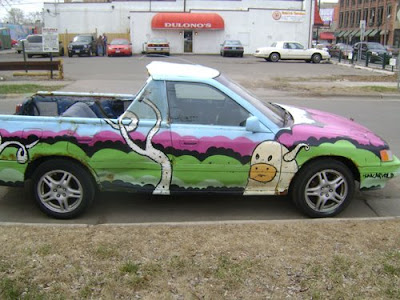 I double dare ya. JB

I think Rago already painted his truck. Take a look. 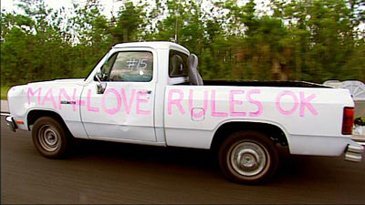 Rago wrote:Wah??? Would I do something like that? LoL

Just found the CL ad. Don't know why it's still up, but whatever. It looks much better in pics than in real life. The hood has spots of turquoise, the body has spots of white & red poking through, & the primer was clearly spray can with new black spots over the old faded stuff. They tried taking a wet shot so it wasn't as apparent, but hey I scored it for $726.00! BTW, the seats don't need covering. They are leather with one rip on the passenger side.

I've decided to do a rusty/white two tone with the white being in the middle. Deciding factor was finding Rusty Metal Primer with 33% more free & using white to break up the body more. Cheap is always cool in my book. Should have "after" pics this weekend if it ever stops raining here.

Rago I found your ride brother

Laugh all you want, I'd be happy driving that car. My next street machine will be something small like that. I almost bought a Monza as a matter of fact, but a truck is more usable for working.

Similar topics
» Flowers by Color
» what kind of chickens lay what color eggs
» Silicone Spray
» Silicone spray
» Can you make bug spray for your garden??

Yesterday at 6:01 pm by REVINKEVIN

Yesterday at 1:36 pm by impalamonte