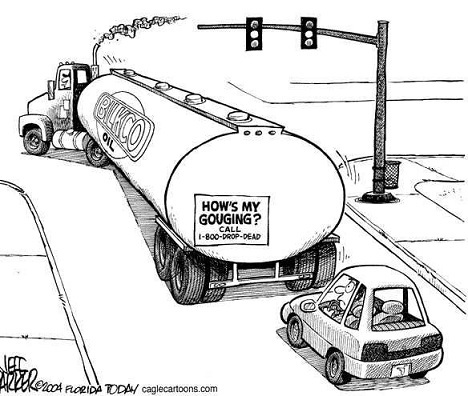 Good one! Paying $3.43/gal in Mpls area. In the summer, I burn higher priced Premium 91 octane (non-ethanol) in the Monte. Octane isn't necessary of course, but just like the option of not having to use that darned ethanol blend.

Yikes! I knew gas was high in Europe...but, that is HIGH! Just curious...how many miles would you say the average driver puts on his/her car over there? And, how many cars does the average family own? In the U.S., our whole society's way of life has been built around driving and $8 gas would have crippling effects on most people's livelihoods and thus, the economy.

Well, I live at the KS/OK/MO border. Here are the prices as of yesterday depending on which gas station I drove by (has been raising daily though).

KS gas is by far the most expensive in this area. Usually MO & OK are about the same with KS almost always $0.20 higher. Also remember that the cost of living is lower here, therefore my pay scale is lower here too. TW's $4.00 a gal is probably on the cheaper side if you look at the median income of his area vs mine. Leike, I couldn't try justifying your price if I had to. $8.50 a gal is just plain nonsense & this is why I have always been a supporter of drilling our own oil because we are headed for record high prices this summer just like we had a few years ago.

Chris, your jokes are usually hilarious, but this one... well I guess it struck me. I laughed for a minute until I realized how true it is.

it used to be less than 5.30$/gal here just a couple of years ago, when we still had the conservative government. than a bunch of incompetent ex communist liberal douchebags came to power and its 7$/gal now and rising as regularly as the sun. they have to increase the share of money they get from such things as gas, alcohol, smokes... to fill the huge gap in the national budget, which they created. i get pissed every time i go to fill my car up...

steve: ive never been to USA, but id say we drive cars just as much here. you see, cars are mostly in 1.2 - 2.0 or maybe 2.5 displacement range, and more than half of them are diesel powered. they get around 40mpgs so our gas expenses are quite similar to yours.

if we had the same gas prices as you do, the malibu would definitely be my dd. a man can dream...

Well, here in Minnesota (Land of 10,000 taxes), there has been talk of adding more to the sales tax on gas in order to help fill the deficit for road construction, repairs and God only knows what else they have in mind. Also, talk of a User Tax based on mileage driven has been bantered about...can you believe that? I guess there is some sort of device they can install that would report your mileage each year for tax purposes when license tabs would be renewed. With all our states running budget deficits, you just watch how creative they can be in order to keep pulling more money out of our pockets.

It's about the same story as abajc3 in the netherlands.
I think the average number of cars / family is about 1.5 / family and the average driver puts about 10.000 miles / year.

we have 95, 98 and 100 octane fuel. but some say that US has a different method of measuring octanes and that our fuels are basically the same octane #. who knows...

I paid $3.65.9 today for my pickup truck. 30 bucks doesn't move the gauge needle very far. I usually burn avgas in my Malibu. Maybe not this year, since it may be over 5 bucks a gallon when summer is here.

What pisses me off about these gas prices (actually, there are a lot of things that piss me off about the gas prices) is that it seems they are just testing the waters of tolerance to see just how high they can raise them before everyone starts sqawking too loud and it appears it might derail the economic recover. I know...what economic recovery?!! Can someone explain to me why two yrs ago when a barrel of crude was $147 that only then did gas reach the $4/gal level and now it's basically there again with a barrel of crude down under $110? What the heck would the price be if it went back up to $147/barrel?

Gas prices in Indiana have crept up to $3.60/gal over the last couple of weeks, but it's slowly coming back down.

I'm getting tired of all of this expensive crap. It's not even pure gasoline anymore, so why charge us full price, other than to make more money? I think I read somewhere that our Gov's head of the Dept. of Energy pretty much admitted that gas prices are being allowed to get high so we feel pressured into buying hybrids and alt-fuel vehicles. Might by my tin-foil hat getting a little tight, but I need to dig up the article.

You aren't the only one who has heard such talk. This isn't about normal supply vs demand economics that's driving the prices higher.

thats our story exactly. oil getting cheaper, gas prices rising. and if we are talking about unreasonable taxes and laws, check this one out, it is going to ged accepted over here very soon: where i live, its normal to help your neighbours and friends for free. then, when you need help they help you back and everyone is happy, except the government, because they have nothing from that. so from now on, this help will be considered illegal (except helping close family members) and it will be fined up to 3000$. we will literally have to hand out a reciept to the one we are helping and then pay taxes for that.

This is all Wall Street, its not capitalism its ripping us (U.S.) off. Its what they can get away with. I dont believe any of what I hear we have plenty and there is no trouble and no one has a good excuse because they (wall street) gets
rich from this nonsense and the dough goes down the line (I95- straight to D.C.)

If we could we had to stop driving our cars, stop smoking and stop drinking alcohol.
We should do this for one year, the whole world would turn upside down !

That is the most bizarre and frightening idea I think I've ever heard, Andrej! Just how do you suppose the gov't would enforce such a thing...unless neighbors and friends started ratting out each other? And that, my friend, is the scary part. Always looking over your shoulder as to who might be the one to blow the whistle on some good deed you did for someone without expecting compensation. This seems like a tactic a communist minded gov't would use to gain control over it's people.

Strange that it's not just our gov't trying to control us more & more each year. Andrej, I feel for you & hope that the law doesn't get accepted over there.

You want to know what law I have a problem with? Seat belt tickets. I almost always wear mine & could understand giving me a ticket if you have another LEGITIMATE reason to pull me over, but why flip a U-turn & pass people just to pull a guy over for not being buckled up? Seems like the officer caused more of a disturbance than the soon to be ticketed driver. For that matter, why tell me what I HAVE to do in my car? My seat belt isn't going to make me a better driver & doesn't effect anyone but myself. BTW, that scenario I mentioned actually happened to me... TWICE!

Speaking of Obamanation, thankfully we only have one more year with this prick. I've only heard bits & pieces, but what's this about us sticking our nose into Libya's business? Isn't that what Obama was slandering Republicans for with Iraq? Oh well, at least we didn't get stuck with Hillary. Maybe next year we'll get someone like Haley Barbour, Mike Huckabee, or Ron Paul in office.

speaking of speeding tickets, i got one a couple weeks ago on my way home from school and i was WEARING my seatbelt, thing is, it was just my lap belt and the cop said i needed to wear those stupid shoulder harnesses too...anyone know of a way out of this? i plan on fighting it as its bs and its a 175 dollar ticket out here.

Yesterday at 11:30 pm by REVINKEVIN