Thanks for putting up the pic of my old car (RIP). I was surprised to see it on ROTW.

That pic was taken about 1993. Not sure of the exact date because I'm sure I was deployed at the time. 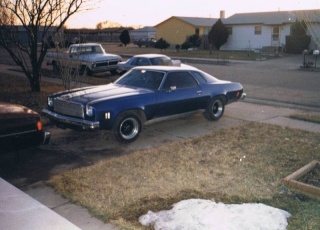 Well deserved. I dig the wheels, they really make the blue color "pop".

I loved that color. JB

wat happened to the car?

It no longer exists.

sell it? wreck it? sumone stole it?

Sold it to a kid that didn't take care of it. Rotted away. I found it just a few years ago and it was a parts car for one of my daughter's friend's dad. He was ready to take it to the crusher.

I got it from him before he did that, and took the few remaining parts off of it that were viable, mainly the grill, bumper, headlight buckets, and the axle. Then sent it to its grave myself.

It's the one car that I kick myself for selling, because everything else I've done concerning these cars has been done trying to recreate that one. I actually was ambivalent toward these cars when I purchased it, and I didn't purchase it for myself even. I bought it for my girlfriend (now my wife) before I went to boot camp so she could have her own car. Initial price $800. For a few years, it was our "good" car. We came to love that car and didn't really want to sell it when we did, but at that point, we had other "good" vehicles and we thought we needed the money from selling it more than keeping it. Seven years after buying it we sold it for about $1000. It had a rebuilt transmission, rebuilt engine, and a Flowmaster exhaust.

Too bad that kid didn't keep it in good shape.

damn kids, i admit im a little rough on my Malibu but eventually when i have the SS going the malibu will become my SHOW CAR, im wanting to get her on a rotisary and do a complete frame off

Sounds like my 76. That's the one i wished I had kept, even though my 77 is far better shape, it lacks the story behind it.

My 76 was purchased new by my parents, handed down to all the kids and i wound up keeping it till it was 24 years old, I was in college and it was in dire need of a resto badly, I had no money and no place to keep it, so Dad and I junked it. I did pull a lot of good parts off it, some of which still live on in the 77.