Hey, I'm Grimeyfonz. About a month ago I purchased a 73 Pontiac lemans sport coupe.It has a 400,4 speed,posi-traction ( I think 3:08's) and some daisy mags from the 60's on it. It runs and barely drives straight down the road. SO ANY help on anything to help me make this thing a looker and go getter would be much appreciated. I don't see very many and have had difficulty finding parts for it. But GM's in my blood and Poncho's are a huge part of me. Seriously, I was probably made in a '66 or '67 gto..

Welcome. Lot's of knowledgeable folks on this forum.

Welcome grimeyfonz. If your car won't go straight down the road I would start with a good suspension inspection to see what needs replaced & go from there.

I am new to the gen 3. They are not considered cool by many, but I dig being odd. Just purchased a 1976 Malibu with a 406ci. It is currently set up for drag racing but I am hoping to slowly restore it to a street machine. I need to learn about the cars and needs to find the secrets to finding parts. I have been looking for a rear seat with no luck!

A seat you would have to get used.  Start with junkyards, & craigslist.  There are some people here that deal in used parts, but shipping something like a seat could get expensive.  Where are you located!

I sent a reply to your other posting for a rear seat...but, since you're new to the G3's, wanted to give you a heads-up on what to expect for parts availability for these cars. As for new parts, mechanical/suspension parts are readily available...as are repro floor pans, trunk pans and qtrs. However, virtually all interior and exterior trim can only be had used. Exceptions, off the top of my head, would be lower door panels,
headliners/sunvisors, carpet, "A" pillar trims, and inner/outer door window felts/wipers. If you need help locating items, post it up on the site. There are members (myself included) who either have or have access to nice used parts to help out.

dynchel wrote:A seat you would have to get used.  Start with junkyards, & craigslist.  There are some people here that deal in used parts, but shipping something like a seat could get expensive.  Where are you located!

I am in Florida. Depending on the price I would be ok with shipping. We also have a vette but hard to take my little one for ice cream and such. A rear seat is an investment I am willing to make.

Thank you for the warm welcome.

Hello, I'm Stew.
I bought my 73 El Camino a few months ago as a project because I like old Chevys. I was looking for something a little older and wasn't even thinking about getting an Elky. Turns out I really like the style of the G3! It's built well and has good lines and I think I can fit my Harley in the bed. The only thing I didn't know was that the 73-77's dropped of the face of the earth as far as parts are concerned! I appreciate this forum as it seems to be filled with people that share my pain! The are a lot of good Tips and Tricks. Hopefully I can provide some good input as I go through the car, or truck!
Thanks

I suppose I could do this:

Short version:  Been around Pontiacs and factory racing for over 50 years (my dad raced for Royal Pontiac from 1963 to 1969 or so). Have been with GM Truck for 37 years in Vehicle Assembly, Product Design, Development and New Product Launch across 12 different GM vehicle assembly plants.

Long version:  I started my GM career at Chevrolet Flint Assembly, the plant that produced C/K pickups, Blazers and Suburbans, back in June of 1979 (pickups were built on Line 1; Blazer/Suburban were build on Line 2). As a GMI student (ie, "General Motors Institute" - GM's own college) we worked in every area of the plant, including Engineering, Specifications, Material, Production, Inspection, Maintenance, etc in order to provide a well rounded, cooperative work experience.

After I graduated with my Engineering degree my first "real" job was as a Production Supervisor, Line 1 (pickups) Fender Set area, second shift. My area started just after body drop and extended down to "hood set". We installed the fenders, batteries, manual shift levers and spare tires, and tightened down the box bolts (plus any body mount bolts the previous area missed!). I had 27 production operations on the line, plus a couple absentee replacements, a couple "Utility men", one repair man on each side of the line plus one Quality Man (which is your "right hand" man), for a total of about 39 hourly employees.

After doing that for a couple years, in 1986 I was able to move over into an Engineering/Assembly liaison position. In this role, the engineer travels from plant to plant, assisting in new product launches and resolving start up build issues. During this time I was able to travel to the other C/K plants, like Oshawa, St Louis, and Pontiac, becoming familiar with their build processes and the similarities/differences to the Flint plant.

Next, I moved to the GM Milford Proving Ground as a full vehicle Development Engineer, still associated with the C/K/R/V vehicle. One of the issues I worked on was the old "brake pull" issue, which some of you might remember (particularly bad on the straight axle Blazer). I used to bring customer vehicles on property to work on or travel to various dealerships around the country to fix trucks that they could not.

My first Design/Release position was back here in Michigan in January of 1994. I was the Engine Air Induction DRE for the GMT800 program. The airbox I designed is still in use today. By this time the organization had restructured from its previous "platform" organization into a "matrix structure". Most of the engineers became subject matter experts (ie, the tire/wheel guy would release tires across all GM model lines, as would the interior guy or the body guy) but a few of us became "Platform Engineers", staying with the respective models. During this time I was the vehicle engineer on the 2001 GMT820D and 2002 GMT820C (the Denali and Escalade), the 2003 pickup, wrote the original engineering plan for what would become the Hummer H2, the 2007 GMT900 SUVs and back to the 2008 H2 program. During this time I worked in every Full Size Truck assembly plant in North America, including the aforementioned Flint, Oshawa, St Louis and Pontiac plants, as well as Arlington, Janesville, Silao and Mishawaka.

After 29 years and 7 months, I left the truck group and moved over to the Chevy Volt program, where I managed the export and out year programs for four years.  I then spent another two years back at truck with design/release responsibility for the K2 pickup cab and box, and G van underbody structure.

As of last Monday I have a new job:  Engineer in the GM Specialty Vehicle Activity, which is part of the GM Performance Variants, Performance Parts & Motorsports group.  I'm on a three year special assignment working on a low volume production vehicle, from start to finish.

It's a '74 Chevelle (base Malibu). My dad, a GM employee, ordered it for my mom to drive. He ordered it as a Police car, so it would be somewhat rare by being a two door. He had to make some calls to the assembly plant (Oshawa) to get it spec'd as he wanted, including:

Currently it is a 555 cu in big block based on a GM Performance parts bowtie block, AFR heads, dart intake with either a 950 Holley or a Dominator depending on the class. That's around 900 HP naturally aspirated and, at 3950 lbs, was good enough for a 9.85 @ 136 mph best ET.

It's been a "good ole' car" and we've been through a lot together. It's taken me to two season "World Champion" runner up positions; I dated my high school sweetheart in this car, and I still have both (my wife, and the car)... 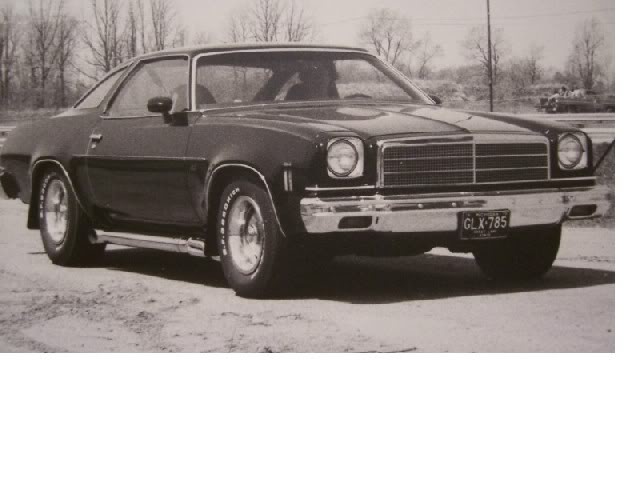 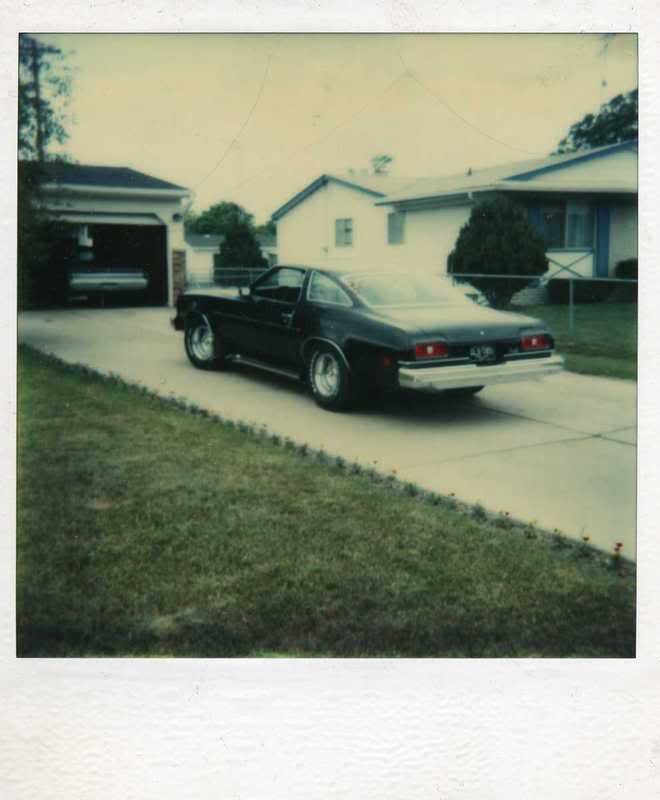 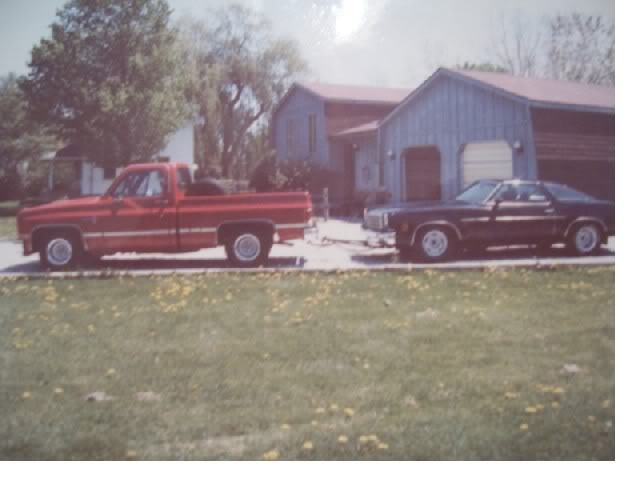 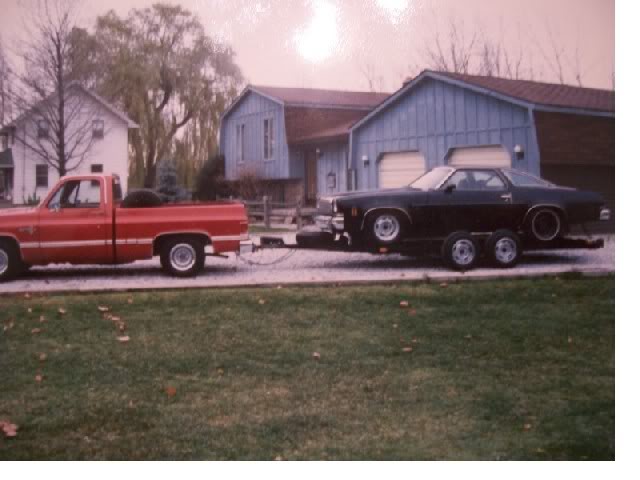 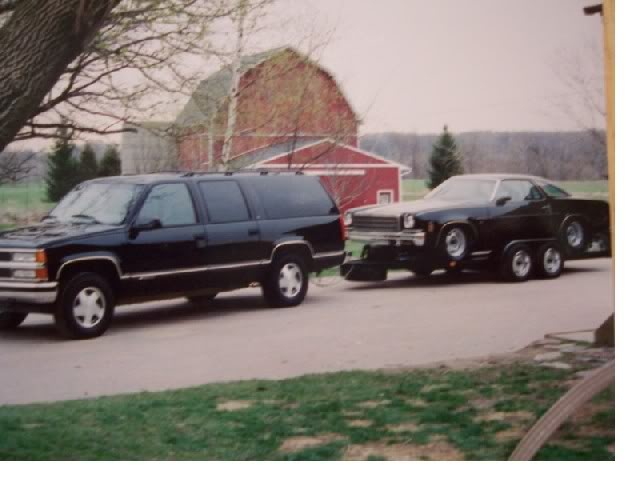 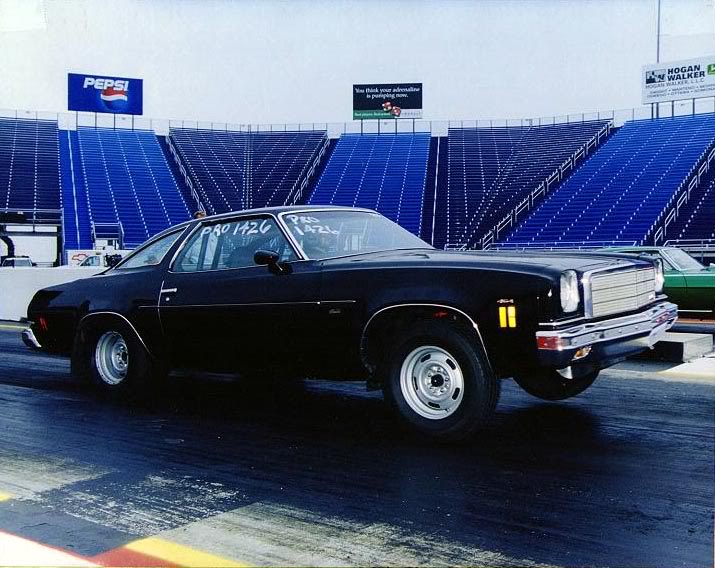 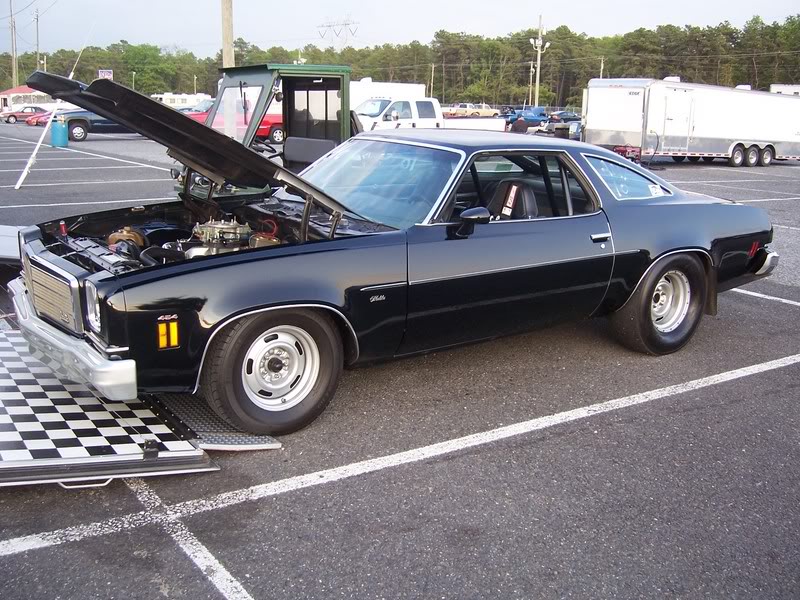 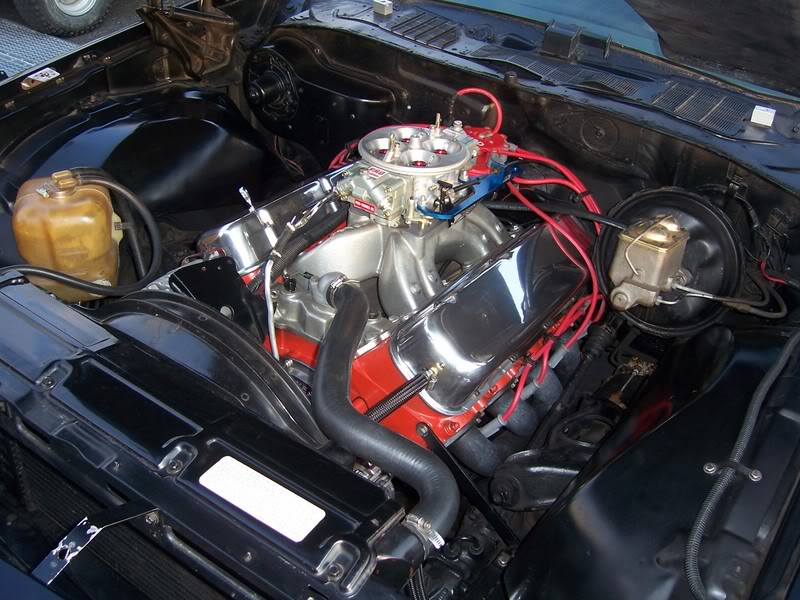 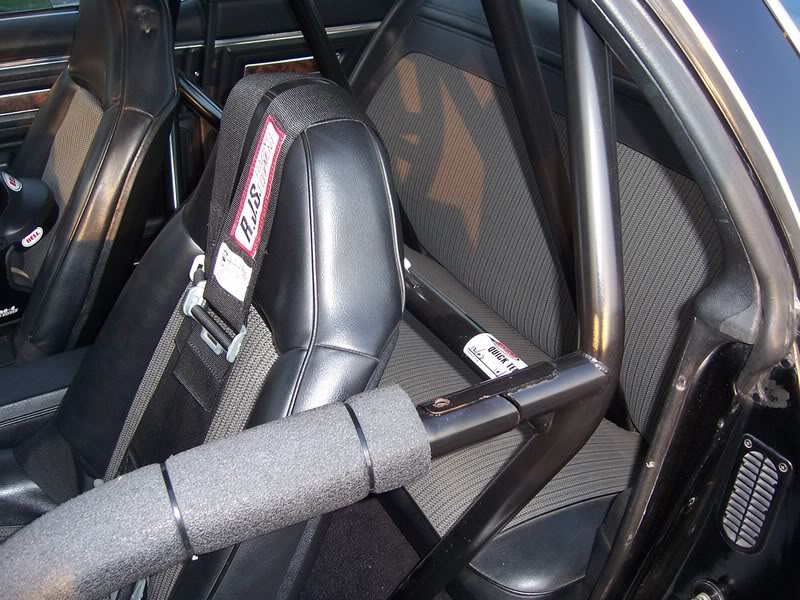 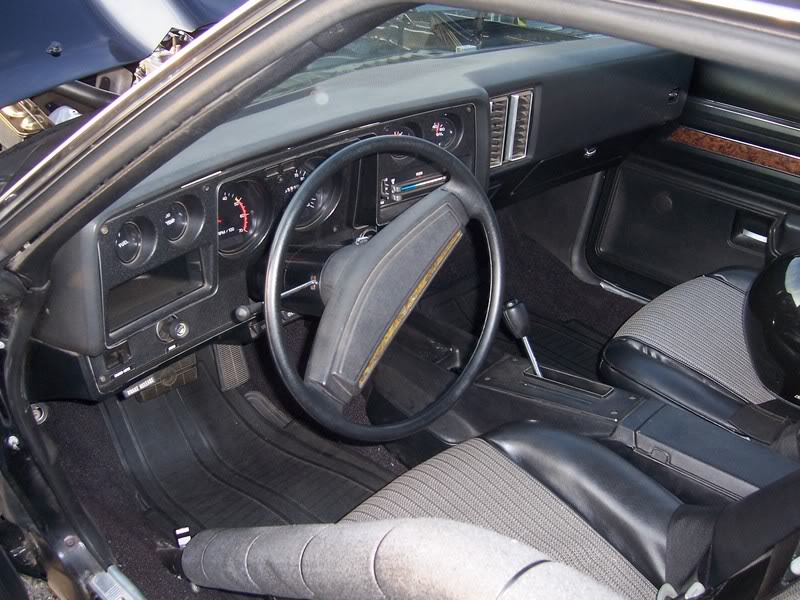 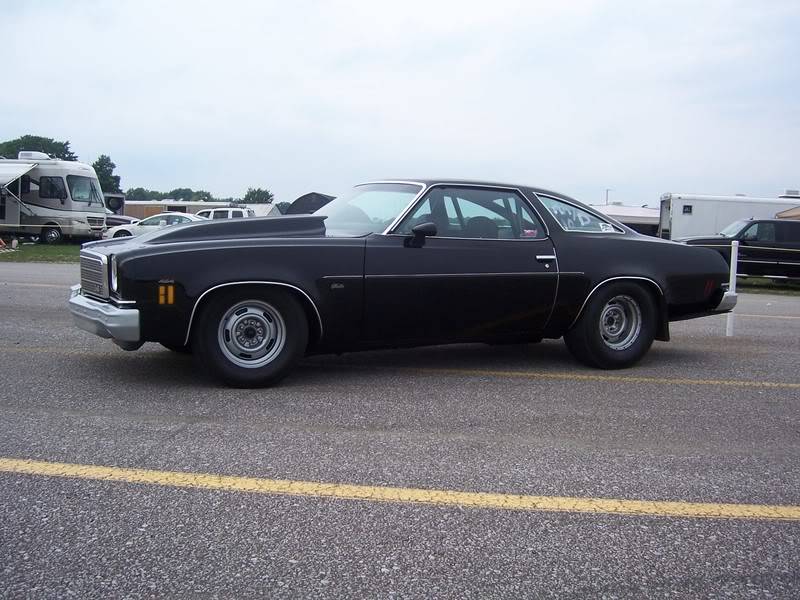 That's some "Intro" Keith. Good luck with the new assignment. It's nice that after all those years with GM your still have one of the best cars they ever made.

Keith ... cool to see you here. Love those old photos you posted!

www.oldcarsstronghearts.com
1979 & 1989 Caprice Classics | pigValve, paceMaker, cowValve
"I don't know where we'll go, but it beats where we're at" __ Lonestar __ 'What About Now'

Hey Keith, my brother was the last class to graduate (2001)with a diploma from GMI. He was there for the name change, but from there on it was (is) Kettering university.

dynchel wrote:Hey Keith, my brother was the last class to graduate (2001)with a diploma from GMI.  He was there for the name change, but from there on it was (is) Kettering university.

Did they use the "Mack" bulldog as a mascot back then? I remember a picture of my brother in his graduation cap & gown posing with it.

dynchel wrote:Did they use the "Mack" bulldog as a mascot back then?  I remember a picture of my brother in his graduation cap & gown posing with it.

Yes; correct. I think we got a giant statue of the stupid dog instead of a campus swimming pool.

Hey everyone, I'm Mike from Port Richey, Fl. Just joined up when I sold a guy a blazer brake upgrade for a 5th gen el camino and he told me about it. I have a 1977 el camino that's my daily driver. Love the car but hate parts availability for it. I'm a hobby mechanic since I stopped doing it full time about 7 years ago. This is the first pre 1980 car that I've owned and the first that I actively searched for without needing it

Welcome aboard Mike, Have a few FL members popping up as of late you can post pics after the 5 day waiting period

Hey everyone, been a lurker on this forum for too long and figured I'd finally join up. lol. I've got 77 Malbiu classic, 61K original miles, got her for a grand and bought her in hawaii. Come to find out she's never left since being bought here (hawaii) since December of 1977 from Aloha Motors. Great gem and find and in pretty good condition. I'm stationed in hawaii and use her as a daily driver. Great to be a member of the forum and glad to be a part of such a great group of people who share a love for theses cars. Thanks in advance to all 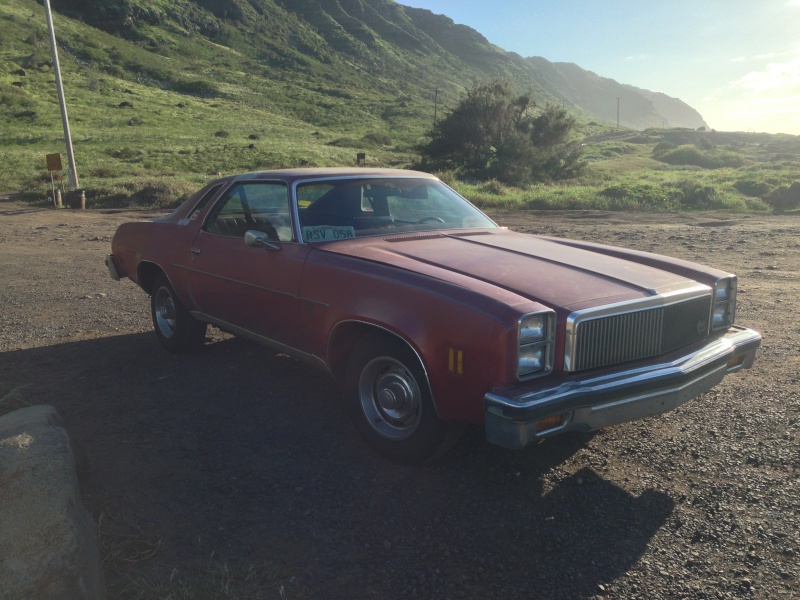 Similar topics
» allow myself to introduce...myself