I am considering buying a four door that has a nice paint job on it and was wondering if it would be wise to buy one. I think later on four door muscle will start to get the feel that wagons do these days. Whats every one's thoughts on this?
ps its been awhile but I been watching lol.

What kind of car?

Okay...I'll bite on this one. I grew up around the classic muscle cars of the day and, just as important as the driveline, was the look and image they projected. Most of them just looked fast standing still...due, in large part, by the sweeping lines designed around the 2-dr. In my humble opinion, a 4-dr just doesn't have the look nor image of muscle. Sure, you can put a big block in one and make it fast, but it still looks like a family car in most people's minds. Station wagons are an anomaly in that they are so different and there are no pretentions that they are trying to come across as muscle cars...just cool retromods. Then again, I suppose I'm considered "old school" and don't necessarily have a grasp on what's on the minds of the generation behind me. When it's all said and done, what it comes down to is whether you think it's a cool car. Don't buy something thinking it's going to become popular and appreciate in value someday.

Mcarlo77 wrote: When it's all said and done, what it comes down to is whether you think it's a cool car. Don't buy something thinking it's going to become popular and appreciate in value someday.

I agree with this statement. On The other hand I am a 4 door person, always have been. These days the 4 doors are starting to get cool because of the seat belt thing and because they are more convenient. Back in 1964 I had two 1954 NOT and one custom built 428 cube full race engine. One of the cars was a 4 door and the other a hardtop with the plexiglass roof in it. I put the engine in the 4 door and had a blast putting down hardtops everywhere. When it came time to sell, I could have gotten 10 times as much for the car if I had kept the hardtop instead of the 4 door. JB

The car in question is a 1973 chevelle. I like the thought of having a two door one as well as a nice four door one for when I have the kiddo with me. Another reason I was consider purchasing it is that as rare as these cars are, a four door I believe is rarer. I like the idear of a family muscle car. The asking price on this car is at 1800 and I think there is that in the body alone. I am going to take alook at it today.
Thanks guys.

I'm not a big fan of any of the A-body 4 doors ( I know...sacrilegious statement). I think it changes the whole look of the car. I don't like G body sedans either. But hey to each his own & if you like it & can make it cool, go for it. The only thing is that if you will ever want to sell it down the road the sedan will be worth less than a coupe & if it needs a lot of work, especially around the doors (belts, weather strip, rails, etc... it's 4x the $$$ there, never mind what else you'll be putting into fixing it.)

Well from what i know of the car it seems to be solid. I have seen it for sale by the previous owner who had used it as his project at the local community college autobody class. It has a nice paint job and when I spoke to him he said he had 3 grand into the body. He must of not been able to sell it for what he was asking and traded it off because it is now at a dealer. I am also thinkn it would feel in some blanks that I dont know about on my car since my coupe is a basket case and I havent realy seen one with its parts all together. I am going to swing by and take alook I think. If I can get it for 1500 I am thinkn why not.

well mine is a 4 door and i absolutely love it, yeah there family cars but still nice, mine just has a hopped up 350 but its plenty of muscle for me, yesterday i decided to give it hell for 3 telephone pole lenghts, i manually shifted it with the pedal all the way to the floor, is spun all the way thru first til i shifted to 2nd and i still hit 75 MPH at the 3rd pole, i think thats preety good for a 4 door "boat" with 2:73's and 20" rims. plus theres more room for ppl and its eaiser to hop in the back seat with a fine looking chick too

1973chevelle wrote: its eaiser to hop in the back seat with a fine looking chick too

Can't argue with that!

and you both dont fit in that back seat as well as you use to. LOL

heres my 2 cents, its about what you like, if your looking to buy something thats going to be worth money someday, your lookin at the wrong cars, none of the g3's will ever be worth serious coin either unless their a true ss 454, can am, or something like that, drive the car cause you love it, and that goes for any car in my opinion.

I am not lookn to make money. Just want somethin cool and different from the norm that fits me. I went and looked at it today. Boy a 4 door is long. She looks mint on the outside but the inside is ROUGH. It runs pretty good too. I am still thinkn this over as I am limited on funds.

So something I notice was that there is a gap of bout half inch after the hood. So the grill and hood dont meet together. Any ideas of why this might be.

Does any one have a line on parts for a four door car. Plastic trim panels in blue is what I would like to see if any are availible and the dreaded cost for said parts.
thanks

There are a few 4-drs sitting up here, but none are '73's and none with blue interiors. Can always paint trim if you can find it. I'm sure I could help with a few pcs...just not sure about those side trims with the non-retractable shoulder belts. Just be aware that the "A" pillars and front/back headliner trims are not the same length as on 2-drs. Be glad to investigate next time out.

If you have the time that would be awesome. Dont go too far out of the your way though I havent committed to buying this but it would be nice to know before I throw down some cash.

Somethin I noticed on this car was there is a gap at the end of the hood of bout a 1/2 inch. It shuts alright and latches. Could this be a mixed up front end or just not assembled properly?
thanks guys wish I could see a car that is all together.

Here's a pic of a '73 with the hood shut for reference. Could be that the hood is positioned too far back. 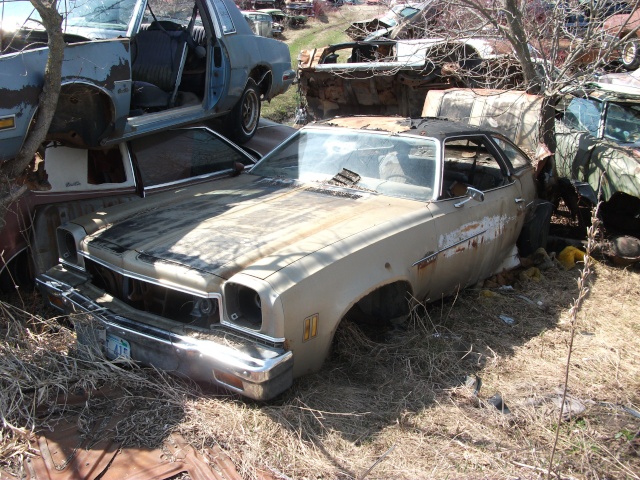 Thanks 77 but I own a 73 chevelle coupe and was surpised to see that this 4 door had a gap. Are all hoods and fenders for our A body's the same length? It is probly just not set right. Makes me want to go take another look at it.

Guess I'm not positive about the hood length being the same between the two. But regardless, the relationship between the front edge of the hood and the header panel/headlight buckets should be the same. And trust me, a gap of 1/2" is excessive. Take a camera with you if you go out and look at it again. Look to see if the hood is set too far back.

The hoods are the same. There are many adjustments that can be made on the front clip, to get all the parts lined up, and the gaps set where they should be. Like mentioned, the hood may be too far aft. The hinges have slotted holes, so the hood can be set where it needs to be. If adjusting it, mark around the washers on the hood hinge bolts in the hood, so you know how much you need to move it. It takes some fiddling around to get it centered between the fenders etc, and it's almost a two-man job if you haven't done it.
Putting some tape on the fender edges will help protect them when closing/checking hood adjustments........and some rags where the rear corners will come down, if you should happen to let the hood slide while loosening/tightening the bolts...