Tempted to buy a Chevette?

Tempted to buy a Chevette?

Ok....I'm not embarrassed to say this looks like an amazing little car. (See e-bay link below- less than 3,000 original miles) 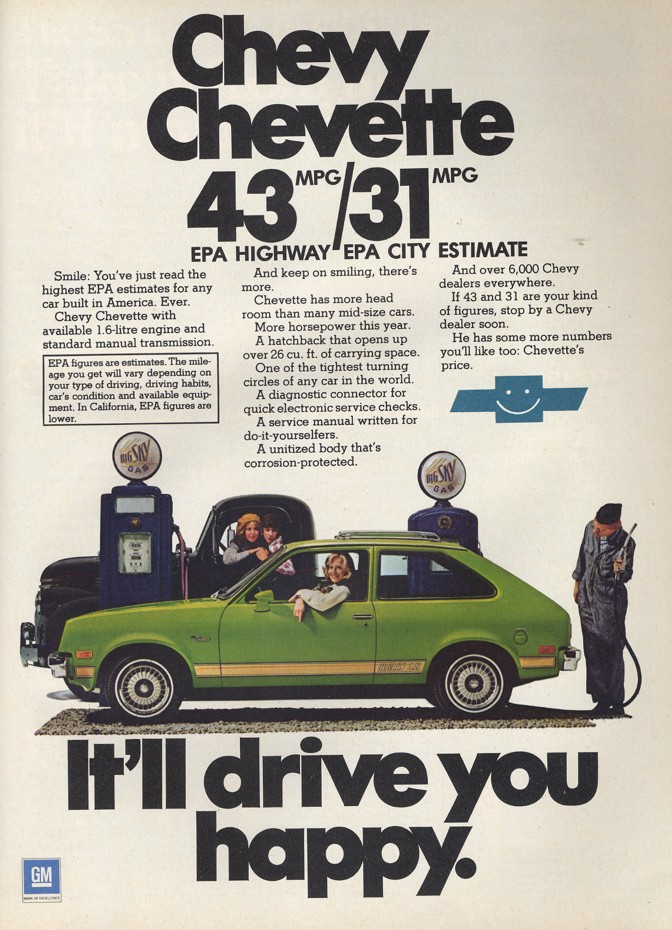 Slap a turbo Honda k motor in that thing and enjoy

Ok....I'm not embarrassed to say this looks like an amazing little car.

Back in the day, I had the good sense to pass on buying one of these p.o.s. cars. Instead, I opted for the upscale Chevy Citation...Motor Trend's Car of the Year!! That one turned out to be a turd, too!

This is for sale near me.

Whoa!!! Would hate to crash in that, prob would not walk away after.

Mcarlo77 wrote:Back in the day, I had the good sense to pass on buying one of these p.o.s. cars. Instead, I opted for the upscale Chevy Citation...Motor Trend's Car of the Year!! That one turned out to be a turd, too!

I saw an 80 something Citation on ebay too...I remember them & the Celebrity...I think Chevy was in trouble (late 80's?) & there was talk they were almost going bust. That was back when GM introduced the GEO line & followed shortly after with Saturn. I worked @ a Chevy dealership for a bit when I was just out of High school. The Geo Metro was even worse than the Chevette....a lady who was "expecting" was there one day looking at one, after she took a test drive I told her to go down the street to our Honda dealership...the salesman was pissed but hey- that thing was a coffin on wheels. They even had issues w/ Corvette until someone woke up & designed the ZR-1, which they got about 10-20k over sticker price back then.

Yeah...I don't think the early 80's were GM's stellar years by a long shot. A lot of junk came out their showrooms.

I remember all the accolades being thrown at the Citation at the time. Was a practical sized car that got decent gas mileage for the time and came with front wheel drive. Although front wheel drive wasn't new, it was now available on a more economical family car. People were on waiting lists to get one and dealerships weren't knocking a dime off sticker. Literally bought mine off the showroom floor. Was my first brand new car and I babied that thing. Always washed and waxed it...even in the winter as much as could be done. Wasn't three years and maybe 50K miles later that wheel brgs started going bad. Then, it was C.V. boots/joints and inner tie rods. Manual transmissions were notorious for needing repairs. But, aside from all that, the thing that pissed me off more than anything else was how the car would all of a sudden develop rust blisters in the middle of a panel...all over the car! Now, those of us who live in the rust belt understand the areas of a car that are prone to rust and reluctantly accept it. But, these blisters (and, I mean large blisters the size of the palm of your hand) would develop in the middle of a door, qtr panel, rear hatch, hood, etc...places that just weren't capable of trapping moisture and susceptible to rust. I remember class-action suits against GM were threatened, but nothing ever came of them. Buick, Pontiac and Olds had their versions of these X-bodies and they all suffered from similar problems. Rumor was that they were using recycled steel and bits of rust were imbedded in the new sheet metal. Don't even know if that is possible, but something was very wrong with the metal panels. GM just kept insisting nothing was wrong until most all of these cars just fell by the wayside.

Yep...Strange how that happened (but maybe not). New England is also a rust prone area and a great many of these cars turned into junk. I wouldn't doubt that GM did something "different"w/ steel and/or paint prep to save a few bucks on production costs back then. Our cars, by comparison have much heavier gauge steel and the earlier cars (60's, 50's & 40's) even heavier. I guess that's why you see many of them in junk yards w/ surface rust but rot limited to a few common spots such as pans that never dry out from a wet carpet.

We had a Buick version of the X-car, a Skylark Limited with a 4-speed. My wife loved that car !! It had the "iron duke" 4 banger in it. When miles got high, I traded it doe a new '86 Camaro, for her to drive to work......big mistake. In winter, it would get stuck in our driveway on 1 inch of snow. I traded that for a new 3/4 ton Choo-Choo custom Chevy van. It was a good trade.

I worked on a few Geo Metros for a former partner in the aviation business. 3-cylinder engine. It was the only good part on those cars.

billy-ray wrote:Slap a turbo Honda k motor in that thing and enjoy

Or do like my buddy did, tub it out, put in a roll cage, and stuff a 454 in front. Even still qualified as a family car because he had a baby seat mounted between the wheel tubs! :LOL:

OK I have to say it. Who in there right mind saves a Chevette for all those years on the hopes that someday you could sell it for even less than you paid for it????????

My grandmother had a '79 5 door, 4 speed. The only thing that stands out as problematic on it was the temperature lever broke for the A/C, and the temp had to be adjusted under the hood each season, but seeing as how little she drove, it wasn't much of a problem, for the 5 miles a week she put on it.

I learned to drive stick in it, at 12 years old, after she passed and before we sold it. Now when I run across one, I sit in it and wonder how I ever thought it was a big car at 10, and how the 76 Chevelle was huge.

I've tossed the idea around a time or two, and swapping in an ecotec or a 2.2 S-10 setup in it. It'd be a happening little car!

Today at 6:41 pm by REVINKEVIN