Make sure you protect that investment w/ some rust-proof coating

Come on now! Absolutely, a couple of coats of POR-15 inside and out, i'll top coat the inside with semi-gloss black. The underside will be top coated with undercoating. I left about a half-inch lip all around when I cut the pans out (room for error), i'm going to tack it all around underneath and then seam seal it.

The pans overlapped in the middle, i'm going to weld a solid bead on the bottom along the seam to really add some strength. I have both sides welded in solid and I started welding the front floor brace back in last night.

I got the floor braces welded back in and the seats line up. I might as well pick up some carpet while I'm at this stage. The problem is I cant find carpets specifically for a 4spd car. Anyone have any ideas or am I just going to have to patch some in around the shift hump?

you can get the standard carpet for our cars and before you tack it down press down on the hump and get your outline, but if you wanna be sure order a carpet from an 71 -77 Impala that should have more than enough if you need to pull it up for the hump cut.

I've been quite busy! I picked up the motor last weekend, gave it a repaint, removed a broken bolt where the bellhousing bolts on. I finished up the floor, seam sealed it and painted it all. At 2am Saturday I was tightening the motor mount bolts, thats right, the motor is in!

I installed the clutch with a new throwout bearing and its all ready to go. 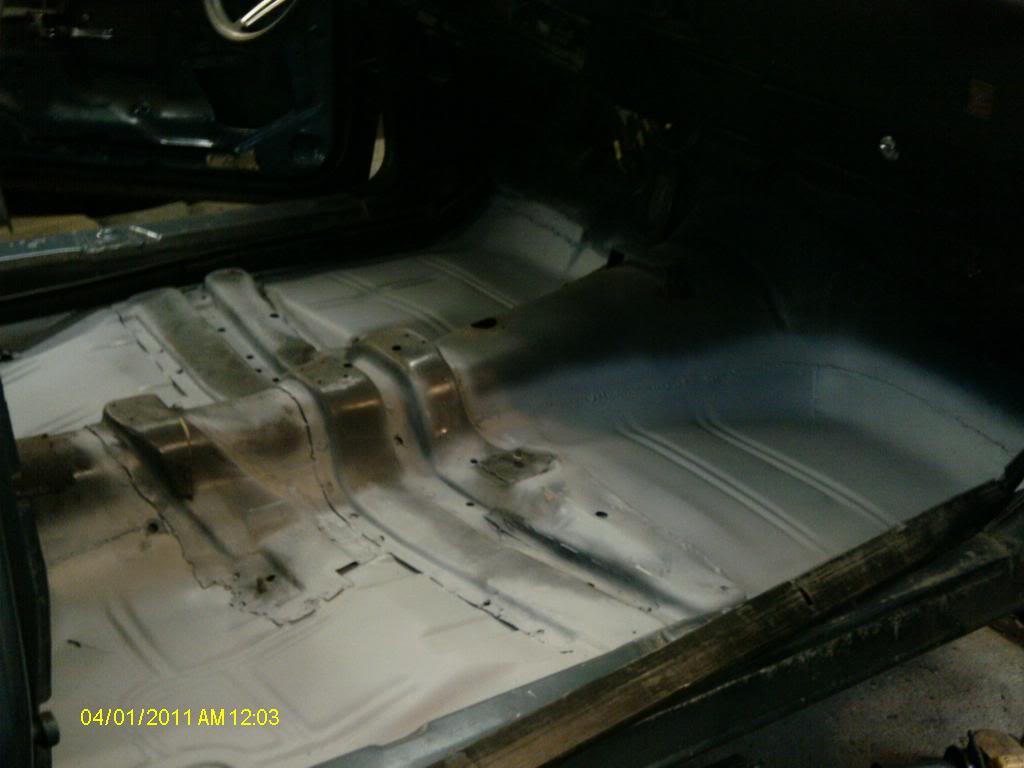 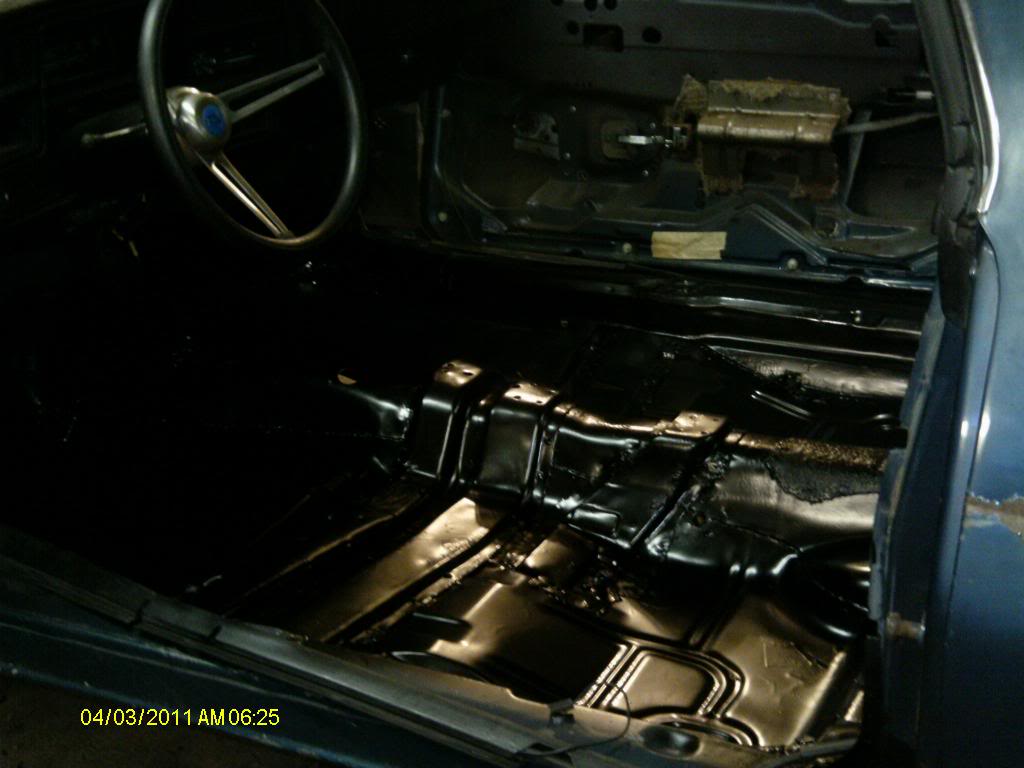 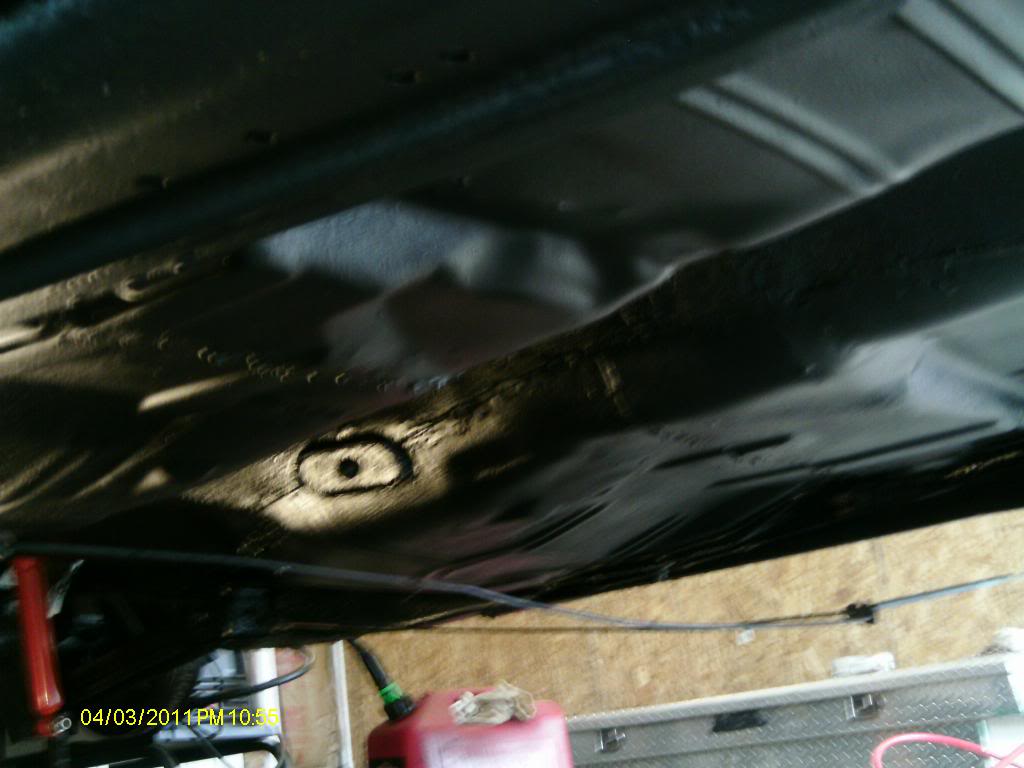 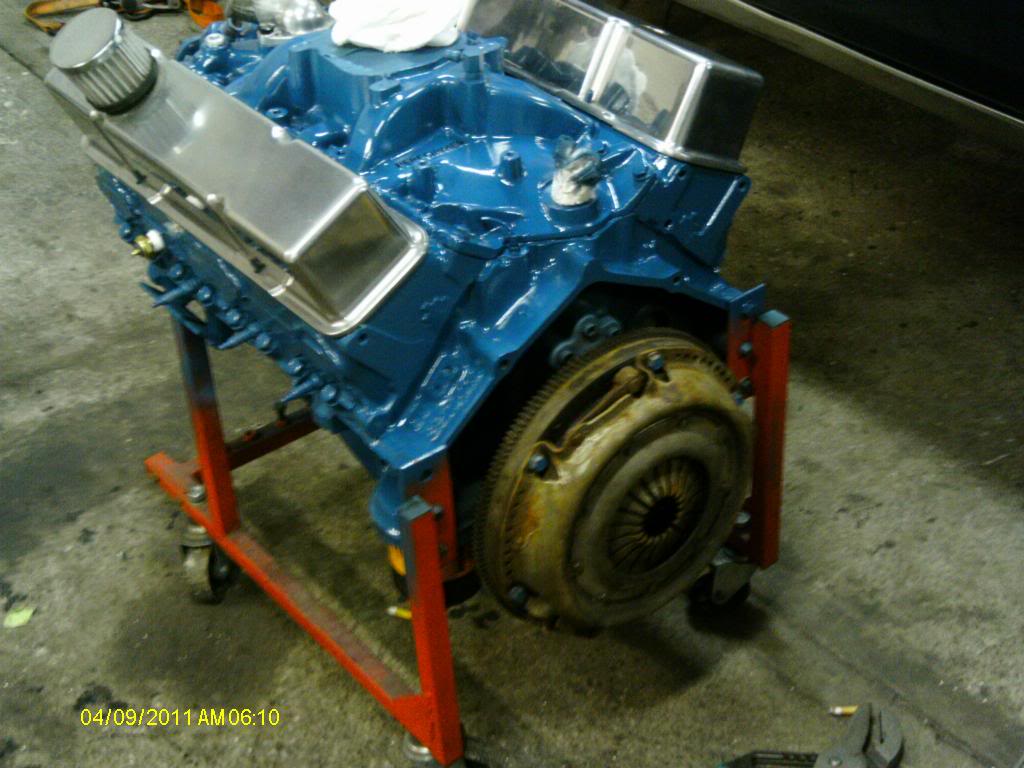 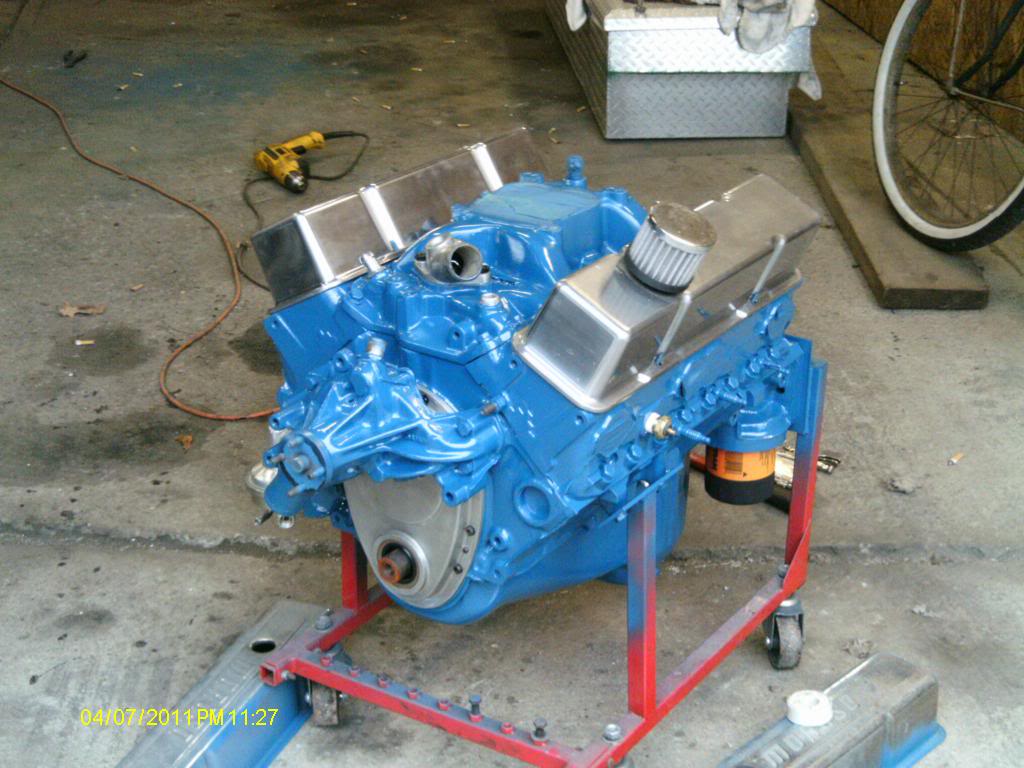 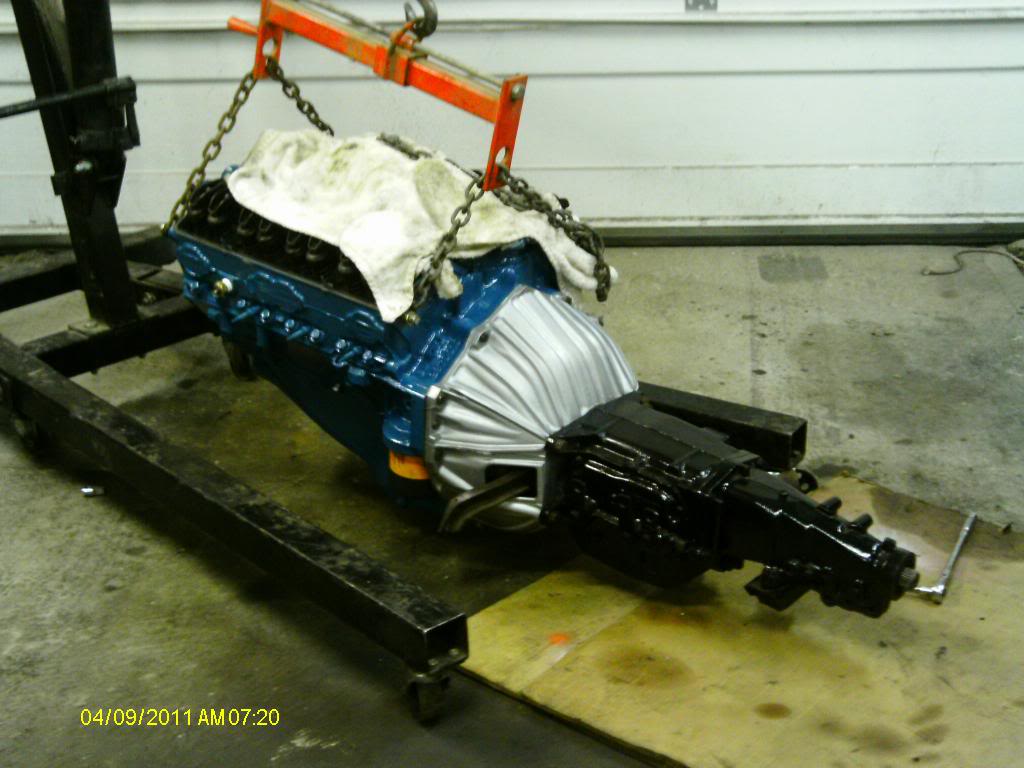 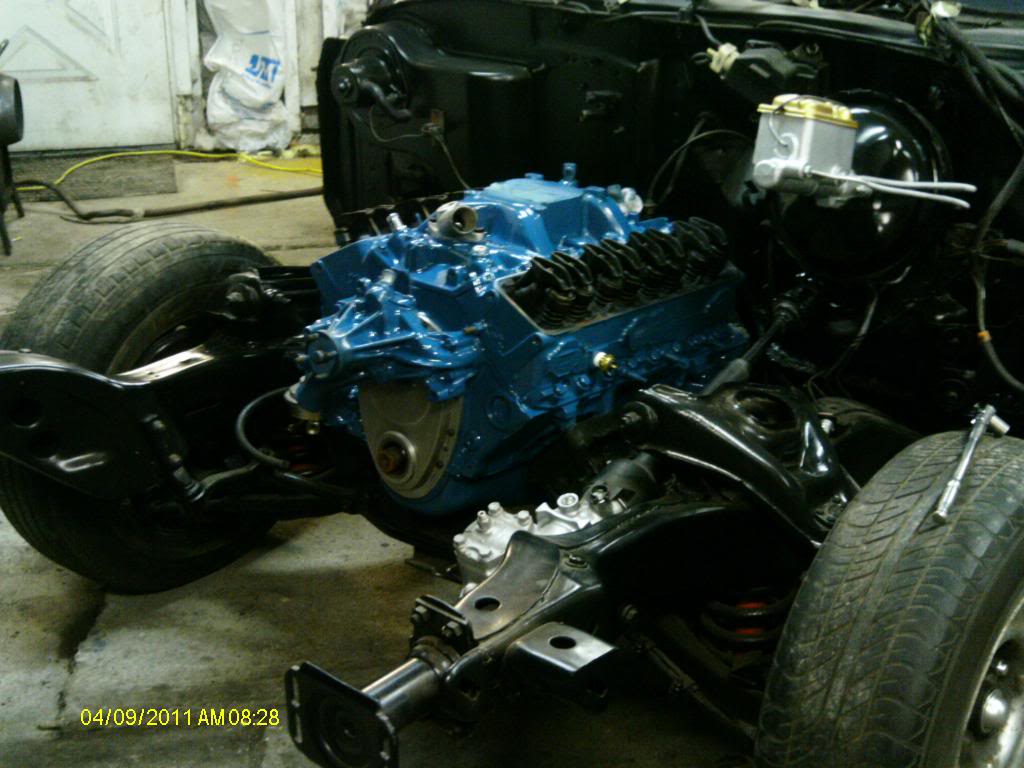 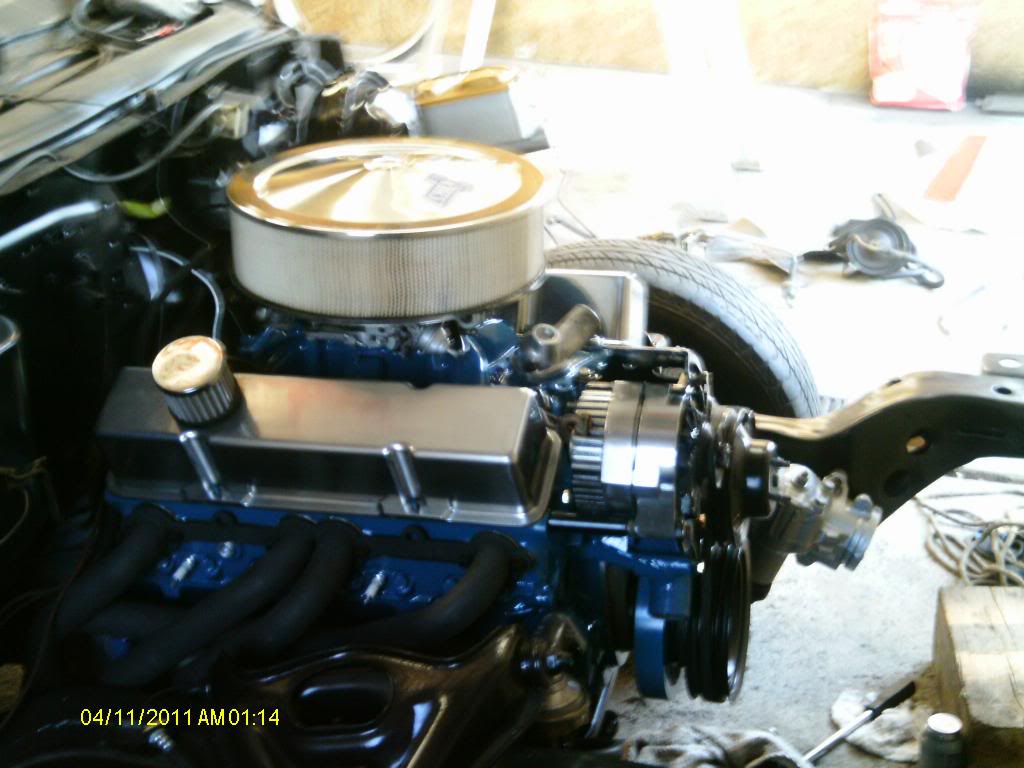 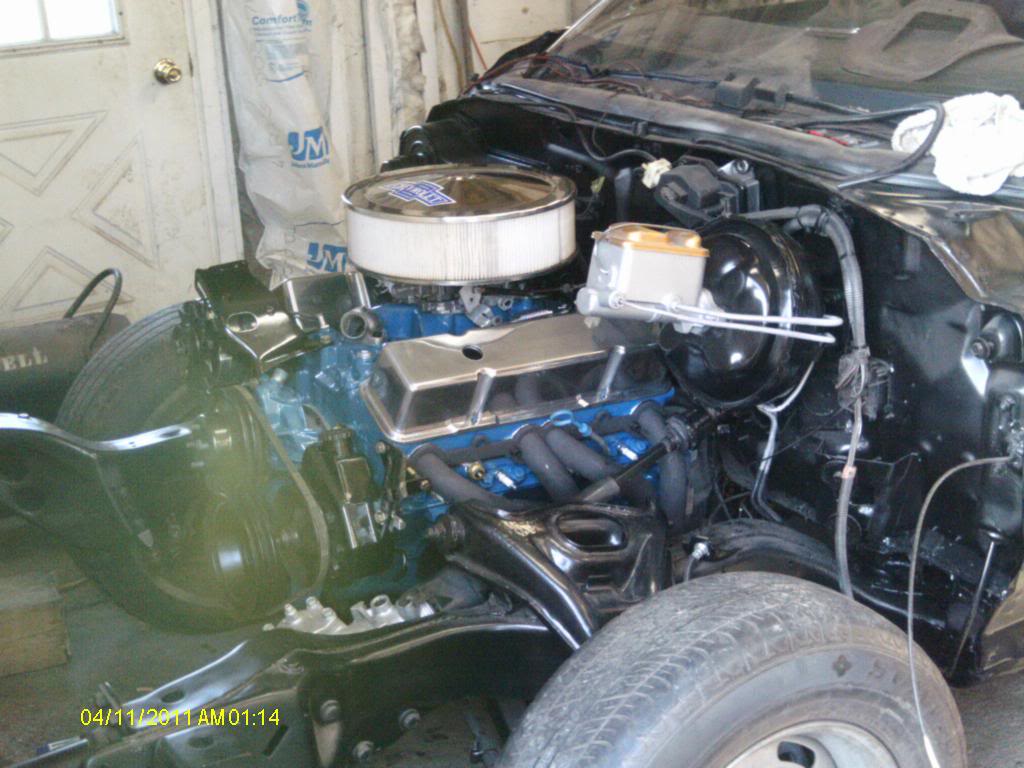 Plus the headers came in yesterday so I have them all set up and installed new plugs. The new starter is in too. Just need the cash to get the carpet, the shift hump, exhaust system and the 4spd parts. I think the worst is over though and I'll be banging gears all summer.

Should be getting ready to start it soon. Most everything is hooked up, I just repaired the core support and installed the radiator. I even filled it with coolant and pressure tested it. I had to cut two power steering pressure hoses up to make one, one end was a flare, the pump end took an o-ring fitting.

) so soon I should have the remaining parts that I need. A buddy gave me a pair of Flowmaster Super 40's for free. I picked up an instrument cover panel at the swap meet as well as a chrome radiator top mout. I just threw the front fenders on for now, first time I've seen it with fenders since May 2010.

I'll get some more pics up as I take 'em.

Happy to report that this thing is alive!

Unfortunately I have an ignition switch issuse: https://www.g3gm.com/t7235-ignition-switch#64177

I'd appreciate any help so I know what I'm looking for when I get it apart. I gotta finish up a couple of things... put the left valve cover on, adjust the fan shroud, it hits the fan. Tighten up some things. Still have to get the 4spd parts and the exhaust. Can't wait to pull it out into the daylight. Should be buying the remaining parts this week or next week. I still have some parts to paint too, so much to do yet!!

Well folks, an update is far overdue. I haven't had a whole lot of time. Work has been crazy and my shop has been really busy until now. I'm taking this break to finish the Disco Malibu. All parts have been ordered and they should be here next week. Surprisingly, the Summit exhaust system (#680131) has already arrived 36hrs after I ordered it. The drivers side fit great with the original single hump transmission crossmember. The passenger side, well, not so much. A few alterations were in place. 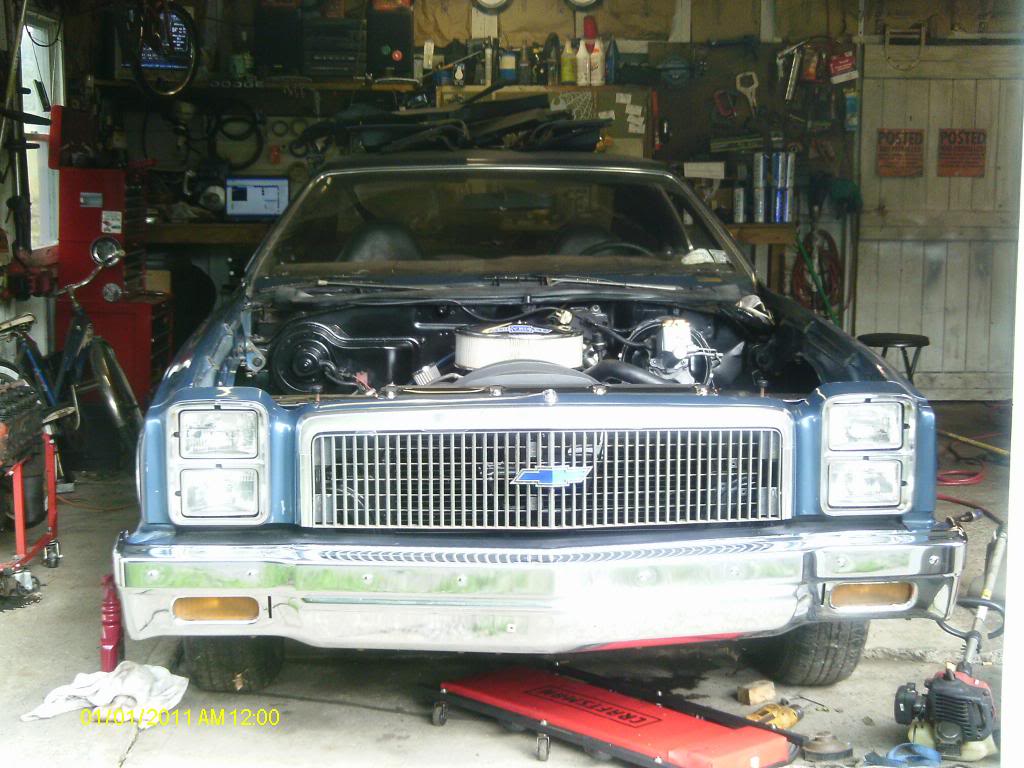 I ended up using an old Freightliner bumper mounting bracket from work and cut it down. Here are the results, only the one side is welded on. 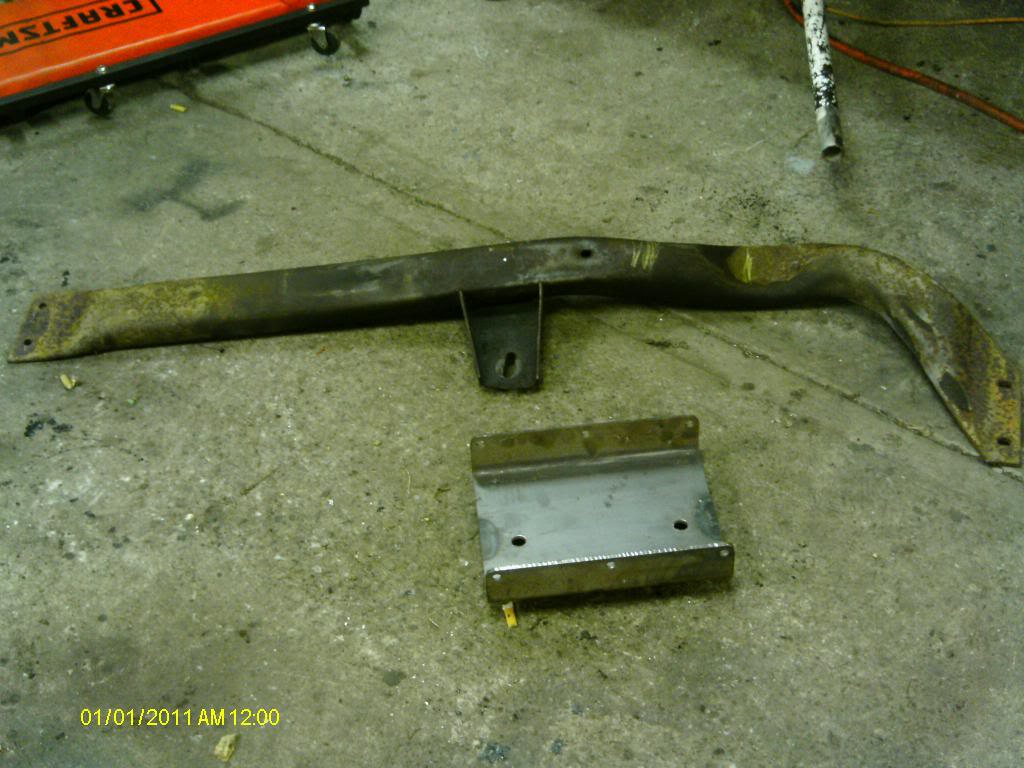 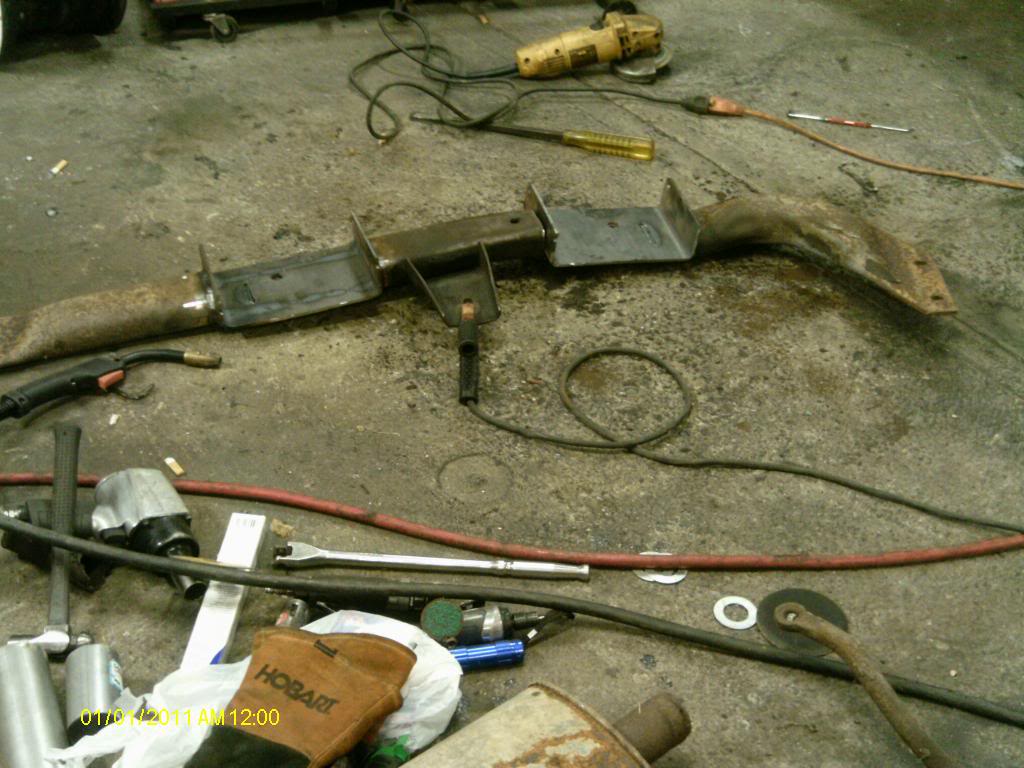 I took an entire 10 days off of work to get this done. By next month this thing should nearly be ready to hit the pavement. Cant wait! 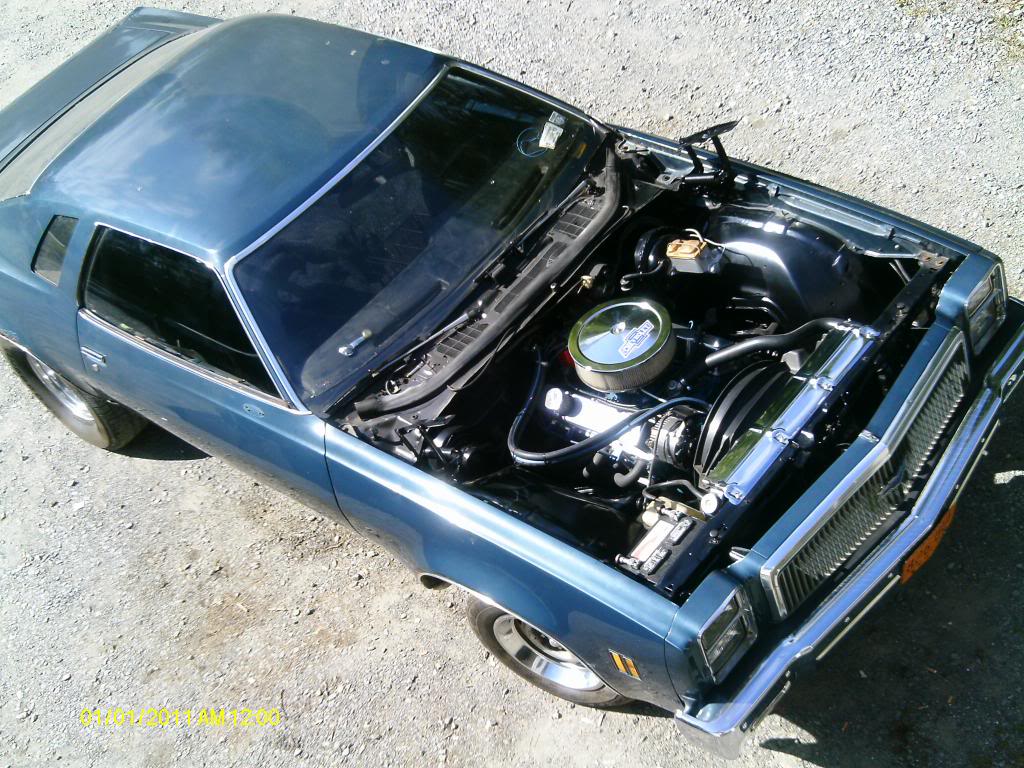 Welp, it's on the road. Exhaust is done, carpet is done all of the four speed parts are installed and working properly! I got all of the Rallies sandblasted and I painted them. Just a few odds and ends left to finish up for now.

Thanks guys! I have to get some shots with the wheels. Painted 'em with cast coat aluminum and clear coated them. 215/70's up front and those 285/70s out back. 3" stainless steel tips - sounds amazing with the Summit 2 1/2 inch system and the Super 40's.

I bought a four speed "molded" carpet from Trim Parts on Ebay. Molded my rear end! Worst quality carpet i've ever seen and it looks terrible. I was unable to get the wrinkles out of it over the trans tunnel and in the rear foot well area. Ugh. No returns and there's $140 down the toilet. You live and you learn I guess.

The speedo is way off. Anyone know if I can change the speedometer gear in the Saginaw trans? I'm it has to do with those 285 meats on the back.

I have to fool with the carb a bit too. The secondaries don't respond right away, hence the "Quadrabog".

Disco- try "Stock Interiors" for your carpet. If it's that crappy- toss it.

Mali- Yeah, unfortunately I looked them up after I was disappointed with what I got. I like the "mass-backing" idea and it looks pretty high quality. I'm going to run it for a while and get a little money out of it. I've owned the car since '07 and this is the first time it has had carpet it in it. Its still a change for the better I suppose.

The carpet I bought for my 73 Monte from OPGI sucked too. Exactly the same problem ,I got the back to fit but the tranny hump fit terrible no matter what I did. It was molded too high. Also you might know your Quadrabog problem is probly the secondary air door is too loose ,Look up Qjet airdoor adjustment,its simple to fix.

Just for the record my '74 still has the original carpet (its pretty ratty) and it really doesn't fit very well either. Its bunched up on the trans tunnel and wrinkled in the rear floor pan.

I am gonna have to do my floors on my other Malibu when I do that car in about 3 years. Its nice to see they fit good.

I grabbed my full set of pans from Motor City Hi-Performance. I was really concerned over the quality but when I got them I realized they were pretty heavy. They fit fairly well, mind you I didn't butt weld them in, I left a 1/2" lip all the way around. I welded it solid on top, tacked the underside and then seam sealed. Not perfect but much better than what I had to begin with. Pulling the floor braces was probably the worst and then getting everything to line up again 100%.

I had only originally planned on doing the fronts but when I pulled the remaining carpet up it was much worse.

The rear is always worse than the front in our neck of the woods.

Yep. I was really surprised that the trunk was in such good shape. I mean I did run it for two years in the salt as I couldn't afford another car at the time. With the giant holes in the wheel wells and the quarter as well as the rear window leak, it's surprising there is anything left. I still have to do some work under the windshield trim, ugh.

Eventually i'm going to get to the quarters. I'm still a little apprehensive to put the cutting wheel to the body on the Disco Malibu. It's gotta get done somehow!

Mine are beat up from a driveshaft launching at the track years ago. There is rot too but I could have patched that. But now the floor is all wrinkled. It was so bad the seats both pointed out the windows after the driveshaft broke. I could not close the windows. It was ugly! 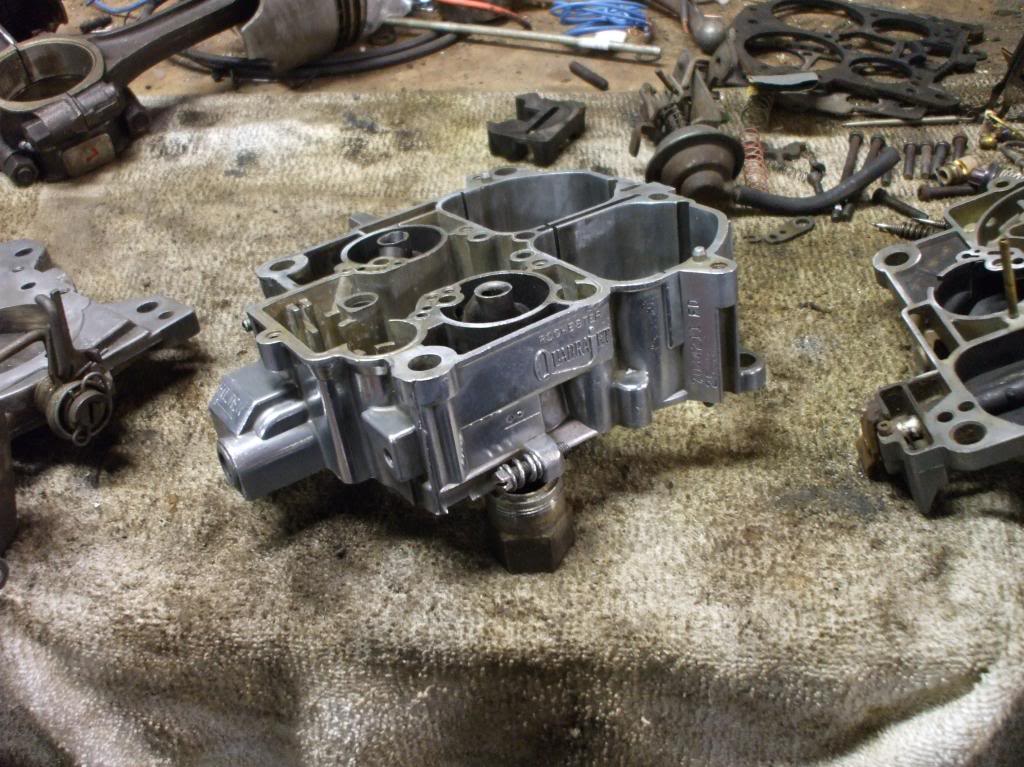 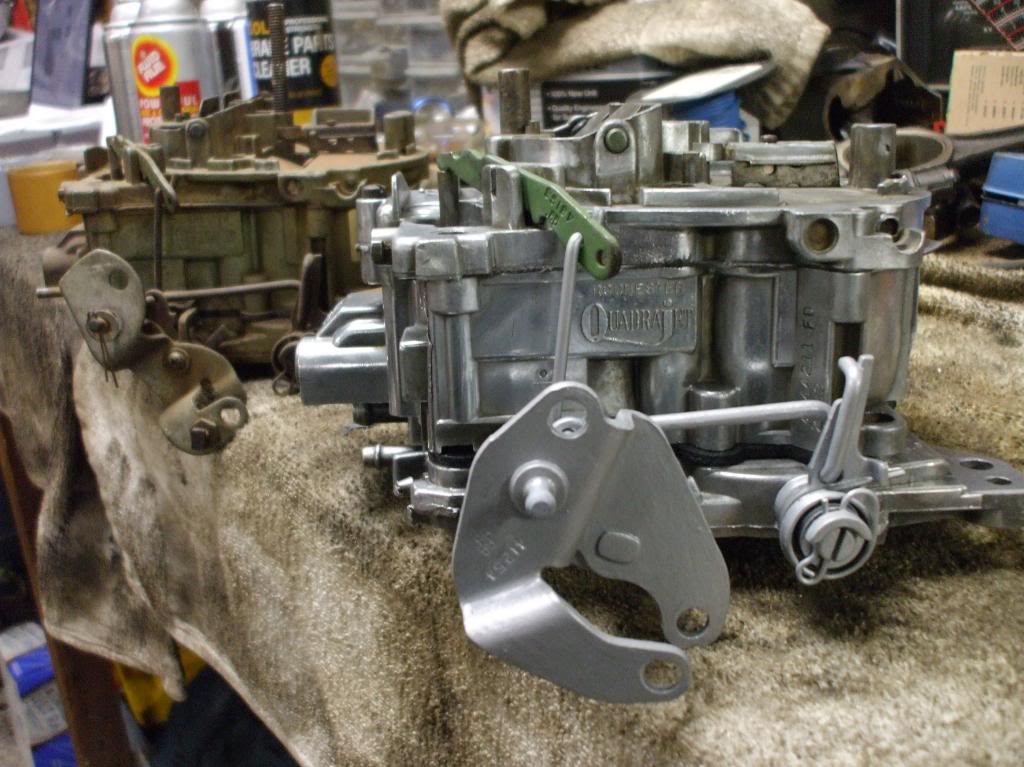 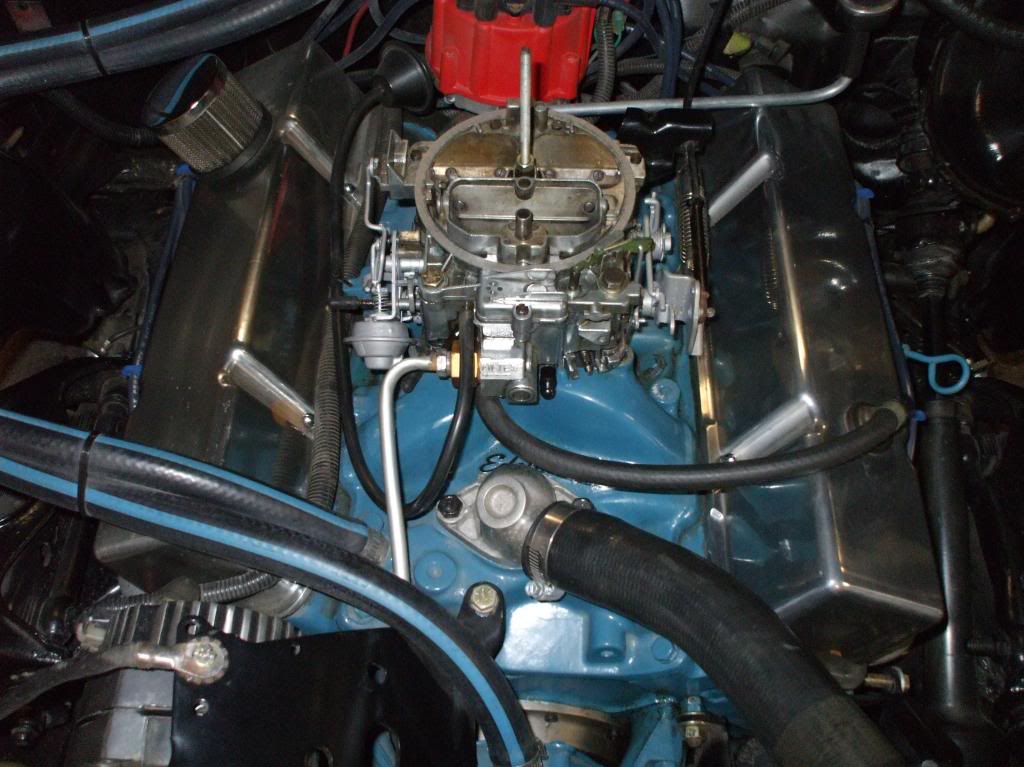 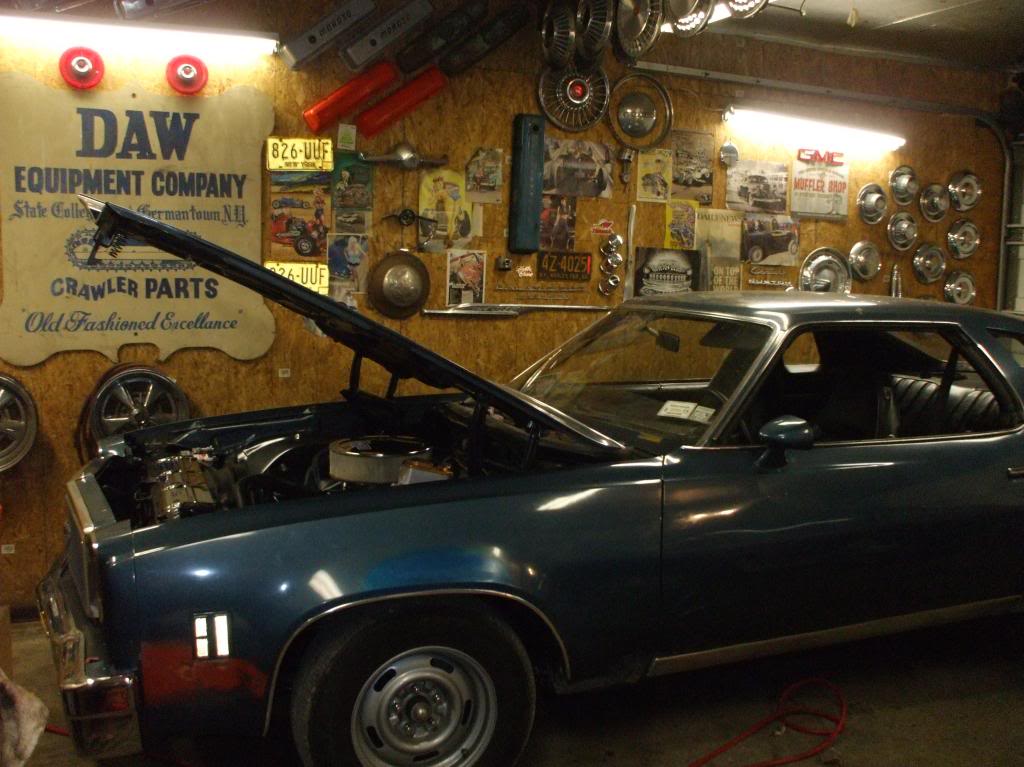 Well, i've been really busy. That's always the story, right? I obtained another Quadrajet, polished and rebuilt it. The result was a much improved idle although I still have to adjust the secondaries. It takes a moment for them to respond to a good pedal mashing. It used to spit and pop at idle and it would only run decent with the timing pretty far advanced. Mind you I had rebuilt and polished up the original carb around '08-'09 and it wasn't up and running until about August of this year. At the time I lacked the necessary knowledge and tools to do the job correctly.

I have yet to dissect the first Quadrajet to find out exactly why I had so many issues with it but I digress. I still have to button up some other details i.e. welding the exhaust up and hooking up the temp gauge. My other annoying problem is the rear tires. They're huge! 285/70/15's. My speedo doesn't work correctly and it seems to have geared it out to the point where it would take miles and miles to reach terminal velocity. I hate to swap them back out for the bologna skins because they just look so right and fit the attitude and stance that I had only hoped to achieve.

I believe I have a 3.08 rear which is the same rear that the '80 El Camino had when I pulled the factory four speed out of it. Of course, that ran bologna skin 215/75/15's on it at the time. This is where I get confused. Could I run a 3.42 or 3.73 rear with these tires and achieve the same performance as I would with the original size tires? I'm sure there's a thread on rear end ratio and tire size somewhere...

Anyhow, I still need to replace the quarters and do the body work, and fix the dash, and carpet the package tray, and replace the speakers, and reupholster the seats, and adjust the front end, and... and... Yeah, yeah. I have been driving the ever-living "S" out of this thing like the old days. Unfortunately other work has been keeping from such progress. The Civic i'm doing up for my girlfriend. I have decided to build a '50 GMC ratrod to commend the legacy that lasted for over 50 years. Nack Brothers Garage. My great grandfather started a local shop in 1930 and it lasted into the 1980's. They were a GMC dealer, automotive, small engine and boat repair shop. Hey, gotta keep up with tradition right?

Anyway, that's my rant for now. Anyone with some good info or reference on gear ratios and how to fix my issue, please get back to me! I'm open to suggestions.