I am still experiencing a little disbelief that there is an active forum pertaining to these cars! I have been banging my head against my keyboard for almost three years now, googling and searching and getting nothing but ads for obscure, spammy, auto parts houses, and the occasional link to a magazine article from way back when!

So...a little bit of background on myself and my car

I'm Jesse, I hang my hat in Salem, Oregon...I have had many, many cars throughout the years...partial to Pontiac, but I am open to anything old and cool.

My car....it's a 1977 Pontiac Grand Prix. Pictures might throw you off, because yes, that's a '73 front end on it. I put the '73 nose, hood, rad support, doors (heavy suckers) and valance on it about 2 years ago. Happened to find a beat up, engine-less donor and I preferred that front end over the disco '77 job. Huge job, but I dig it. It's got a Pontiac 350 4 barrel, TH-400, although I am on the hunt for a 455...getting hard to find those things these days. It was originally a bench seat, tan interior, brown exterior. I converted to buckets, console with a Hurst Pistol grip quarter stick, and installed the rally guages, and changed interior color to black, gave it a quickie flat black paint job to make it all one color. And...it's a T-Top car, I dont think they are the Hurst hatches...no markings and they look different from the Hursts I have seen...too early to be Fisher's, but not sure what they are..they are cool, but leak. Currently running Appliance S/S copies. 15x10 in the rear with 295/50R15's (yes they fit in those cavernous rear wheel wells) and 15X7 up front with some skinnies. Best part, I paid $200 bucks for this car and drove it home. Future plans include a proper paint job, restoring the original Rally II's that came with it and 455. Also looking for a Posi rear.

That's about it for now...look forward to meeting you all


So glad I found this site!! 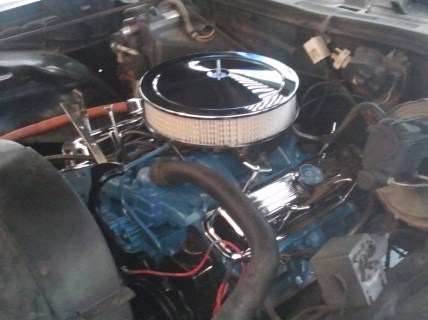 Glad you found us! So much useful hands-on information shared on this site! Love the styling of those GP's; especially, in black! Coincidently, I just had a discussion with an employee at the local auto parts store concerning t-tops furnished on these '73-'77 "A" bodies; i.e. were they a factory option...Hurst conversion...aftermarket add-on? I've seen both Hurst glass (not only on Olds, but on a '76 Regal)... and plain, unmarked glass. Know of two GP's sitting in the yards up here that had t-tops. Anyway, looks awesome!

Thanks for the kind words. The T-Top thing was definitely a gray area for these cars, the "official" T-TOP supplier was Hurst, but other companies jumped on the bandwagon and became dealer installed or aftermarket installed options. Pontiac would deliver the cars to Hurst Performance for the T conversion and then off to the dealers. The Tops on mine resemble the "American Hatch" tops more than anything, so they were probably a dealer installed gig. Honestly, I kind of wish they weren't there...try finding seals for an obscure brand of T-Top on any even more obscure and forgotten platform.....LOL There is a really fun website about all this. I can't post links yet, but if you google "Those 70's T-Tops" it will get you there!

Anyways, thanks again, I am excited to be here

Curious. With t-tops, was there any strengthening of the frame like you would have with a convertible car? I've seen some good cracking from body twist on G3's at the corner where the roof meets the post. Top corner of the window. It was mostly on cars that had good HP and decent traction. Just wondering.

From what I have researched, there was no additional bracing or strengthening of the frame on the T-top equipped cars. Since it wasn't done "in house" and farmed out to Hurst (until 1978 or so when Fisher body started installing them), or installed at the dealership, I am pretty sure these were just plain jane standard cars getting the t-tops. Also considering the time era that these were built and the horrendous quality control, I personally doubt GM spent any extra time or money reinforcing these cars for the conversion.

I could be totally wrong, but I have seen a lot of T-top issues over the years. The Fisher body t-tops that starting in '78 seemed to a much more well planned design. I ran a '79 T/A with a healthy 455 for years with T-tops with no issues, except for adjusting them from time to time. My GP, will leak regardless of what you do, in the winter I have to do things like using vasoline in the gaps or gorilla tape in the channels to keep me dry

I think you're right, Sleddogg. I literally cut up the '76 Regal with Hurst t-tops using my Sawzall to salvage rust-free floor pans, trunk pans, wheel wells, roof and there wasn't anything unusual about the structural integrity of that car that I noticed.

And, before anyone asks why I cut up a rust-free car...it was a car donated to the local salvage yard without a title, drivetrain or interior. They would only allow me to take/cut parts off it.

Welcome!
Nice Grand Prix, you really don't see many of those. That must be a fun car with the t-tops. This is a great site with lots of good info and nice people.

These GP's are definitely one of those cars that everyone exclaims how they or their dad, brother, mom neighbor, etc had one "back in the day, and wish they still had it"....but there are very few around......guess they all got crushed

Keep us updated on the progress.

I love the look of the '73 Grand Prix! I had one myself quite a while ago.

Welcome,
I am out of Eugene I seen a early grand prix sitting at a yard in Molala Oregon. Up north of you 74 I think I may have the spelling wrong. I have a rust bucket chevelle. I really should post updated pics. Been cutting out the trunk and welded in new braces.

Welcome to the site- beautiful car.

Sure looks slick dressed in black!

welcome dude, i was born in coos bay, still got family up in looking glass, roseburg, and coos bay, my parents are looking to move up to ashland in the next year or two.

Looks good! This seems to be the most active place for 73-77 A Body cars, even if its focused on the G3 Chevelle, there seems to be a little bit of everyone here! Its great.

Yesterday at 6:30 pm by Flywheel

» Car on Front Page of G3GM

Yesterday at 5:24 pm by impalamonte

» How to remove rust in the interior