...well, my father technically still owns the car but its been sitting in my garage for nearly 6 years. Ive come to the realization that if i dont bite the bullet and restore the car, no one will. My father bought the car off the McGuire Chevy lot in North Bergen, NJ in 1974. It was his daily driver for 25 years until he bought an SUV to tow his boat. Its a Landau, 350 2bbl and TH350 combo with the heavy duty rear end option with factory rallye wheels.
The unfortunate part of the story is that since it was a daily driver it didnt see much garage time so it has the typical behind-the-wheel rust-n-rot. To top that off, 6 months before the car ended up it that garage and off the road, it was side-swiped while parked on the street, tearing the front bumper clear off the driver side mount.
As for the good news, the engine was rebuilt in the early 90s and is strong and fast (even with the factory 2bbl) along with the trans and rear.
So i have my (body) work cut out for me.
Ill have photos to post soon and will certainly document the work. You can expect lots of questions.

Welcome to the forum- good luck

Welcome and good luck with it. I miss my 74 monte.

Good luck with your body work. A fellow several blocks over has a Monte he uses every day and there is not a place on it scrape or dent free. He painted it himself mainly to keep down the rust. It still purrs like a kitten. JB

Glad to have you on the site! Pretty cool that your dad was the original owner. Man, if one of these Montes was used as a daily driver for 25 yrs here in MN, it would probably look something like this! 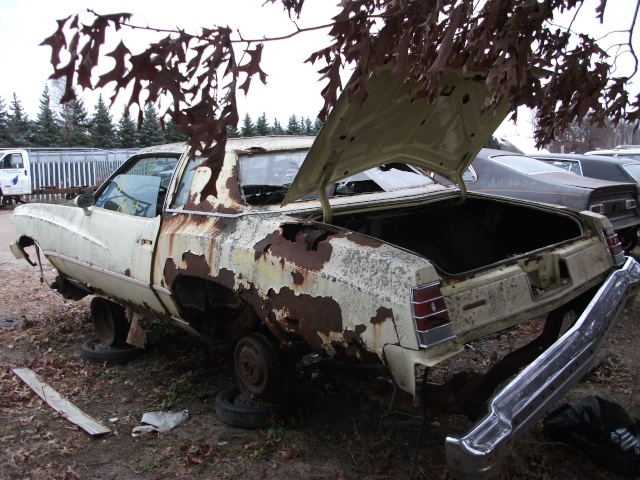 Welcome ! At least you have sites like this and the rest of the internet. I wish I still had my dads 75.Take your time with it,you have to keep at it and you will see progress.

Welcome, it sounds like you have a good start to have a nice monte. Be sure to post pictures when you have a chance.