I've always wanted one of these. Kind of reminds me of the custom coach-built Bugatti's from the 1930's. I'll never afford one but it's nice to fantasize.

There is a'65? Austin healy near me that the guy has a supercharged Chevy 350 in. It is blue with the chrome roll bars like a cobra.

Sunbeam Tiger is another people like to modify with either SBC or SBF motors.

Kind of like an A H Sprite (I think that's the one you're referring to). Made around the same time...mid 60's.

My mom wanted one (A Jag) when she finished school in the 60's,my grandfather talked her out of it and into a Torino,I think she said it was 2 grand or something .

One of my friends in the early 60s had an XK120 Jag. He asked me to swap out the engine for a Chevy 265 in a '55 two-door he had. So I did. He said I could have the car after the swap. I made an adapter plate to mate the Jag 4-speed to a Chevy bell housing, and since the engine needed a rebuild, I bored it out 1/8 of an inch oversize, to a 283.
Peronally, I would have kept the OHC six that was original in the Jag.

Anyway, a couple friends and I built a drag car with the '55, which had a really nice body, which we had candy-apple blue paint job done on it.

The Jags are interesting to drive, handle well etc. Worth more to collectors than they are worth as drivers in my opinion.

Don't remember what size it was. I do remember that the sump held 15 quarts of oil though. Must have been a race oriented idea.

I clicked on the link & the description says 3.5L

I should have read it again b4 asking 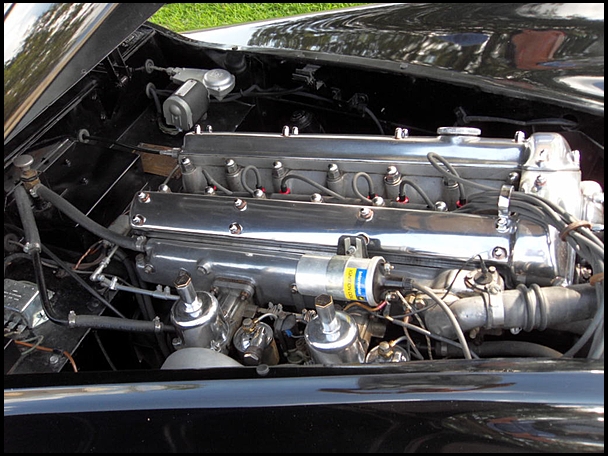 I've had 2 Jeep Cherokees with the AMC/Chrysler straight 6 block- 4.0 Liter...change the oil every 3000-3500 miles & they run forever. They were bulletproof like those old Chevy 6 bangers. They switched to a 3.5L V6 in the Jeep Liberty & Dodge Nitro. I think they still sell the 4.0 L engine for the entry level "Wrangler".

Nope. 4.0 is dead. When the newest minivan based wrangler came out a few years ago, the 4.0 was put out to pasture.

The Europeans were never much for big cubic inch engines it seems. Gas has always been pricey there, so that may be one of the reasons.

dynchel wrote:Nope. 4.0 is dead. When the newest minivan based wrangler came out a few years ago, the 4.0 was put out to pasture.

pila wrote:The Europeans were never much for big cubic inch engines it seems. Gas has always been pricey there, so that may be one of the reasons.

Yeah I don't know how they sell ANY cars there. Way more $$$ than here.

I used to have a 1964 Dodge Dart convertible with the six cylinder and a four speed trans. That was a great engine. JB

You never needed a new Jeep with the 4.0, thats why they dont make it anymore.

77mali wrote:I've always wanted one of these. Kind of reminds me of the custom coach-built Bugatti's from the 1930's. I'll never afford one but it's nice to fantasize.

My dad has a 56 Jaguar XK-140 DHC (stands for drop head coupe). That's Brit language for convertible. The one pictured in the auction is a roadster. My dad's car has a top that folds back just like an American convertible. He bought the car in the 80's and completely restored it over the next several years. The car didn't have the engine or tranny so it's got a GM 4.3L V-6 and TH-350 in it. The engine is generic GM but I think was in Olds Bravada, S series Blazers, Chevy pickups, and probably a bunch of other stuff. The trans. was out of a wrecked 72 Monte Carlo and it has the dual Chev. - BOP bolt pattern. The car is Chevy truck Flame Red (a real nice cherry red that's not too bright but still shows really well) with oxblood interior and tan top. It's gorgeous and runs like a scared rabbit! He also updated the car with 4 wheel disc brakes from a later Jag. (a HUGE improvement, by the way!) His car was built for export to the USA so it's left hand drive. He is getting older now and has talked of selling it. He loves the car but it just sits in the garage. I don't think he's driven it in close to a year. It's worth a decent amount because it's an authentic Jag, but isn't a 100% car because of the GM driveline and updated brakes. It runs much better and is way more reliable than if it was stock, but the Jag purists probably hate it.

My brother and I like the car alot too but don't know what we would do with it. We each have Oldsmobiles and other cars so our garages are full, and my brother will end up inheriting my dad's 54 Olds S-88 2 dr. Holiday Hardtop. So, eventually the Jag will get sold.

If you are serious about wanting a Jag, and may be interested in my dad's car, send me a PM and I can get you in touch with him. These old Jags are really cool and they have great lines.

I'm sure it'd be out of reach. Like I said- nice to dream

If I were you/your dad- I'd list it on Hemmings and or e-bay. Might be worth listing it in e-bay Canada too. They're a bit more "English" then we are & I'd bet they'd appreciate it more there than in the US. Good luck.

ant7377 wrote:You never needed a new Jeep with the 4.0, thats why they dont make it anymore.

The Cherokee's were some the best Jeeps ever built. I had a 91 & a 2000. I'd probably still be driving the 91 (seriously) if Jiffy lube hadn't used the wrong filter once & it blew off & killed my motor. Bastards.

Yesterday at 8:41 pm by bucket

Yesterday at 6:41 pm by REVINKEVIN