so i was curious what parts,cars,etc are interchangeable with the laguna's

Most everything from a regular chevelle.  Caprices can supply a lot of parts (rear ends, sway bars, brakes can be adapted). A '70's trans am can supply a big 2 1/4 inch front sway bar. Try looking at the interchangeably thread.

how about interior pieces?

73/77 chevelle.  Some Monte Carlo parts like door panels and dash should fit (though I'm not 100% about this)

What EXACTLY are you thinking about. Many small and large things interchange, but what the item is makes a big differance. Except for emblems and area in front of the front edge of the hood are the same between a Laguna and a Chevelle. JB

I have seen other 3rd gen GM dashes in Chevies, but have no idea how difficult it was. There is/was a complete writeup either here or over at CT on how to remove a dash. JB

Here's a comparison of a Cutlass dash vs Monte/Chevelle/Malibu dash.  I didn't measure the length of each to see if they are identical, but maybe one of the Olds guys on here could do that.  This might be best option as I rarely see a Cutlass dash with cracks in it.  At worst, the padding tends to swell a little along the back edge.  Much rather have that than cracks any day. 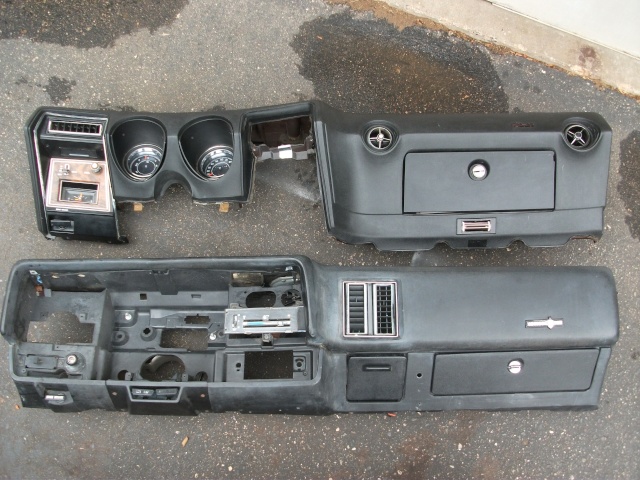 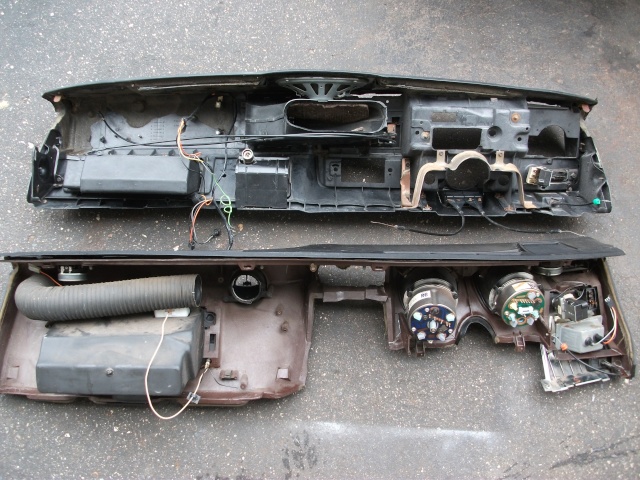 i like that i may get some measurments from a 69 camaro dash,olds,5th gen camaro, 69 chevelle and see wich i like best im probb going to strip the car and put a EZ wire harness in there.

Any 73-77 Abody dash should bolt right in. Afterall the sheetmetal on the cowl and firewall are the same on all these cars unless you are comparing an A/C and non A/C car. Then there is a difference, but it will still bolt in. The more stuff you have from the donor car the easier the retrofit will be. The olds dash is a good looking piece!

Looks like the major differences would be the various types of heat/ac /vent controls used in the different models. Nothing that can't be fixed, but that part would not be a direct bolt in unless you take the complete under dash unit from the donor too. Again, a little fab work or custom work would get you in there. I saw a 69 Camaro with a 74 Pontiac Ventura dash in it, and that was real nice lookin"!!

Nice comparison pics of the Olds Cutlass vs. Chev. Chevelle dash. Just some general comments on the Olds dash. The one pictured is from a 73-76 Cutlass. Looks to be in really nice shape. The Cutlass dashes in excellent condition go for some good $$$. Black is always a popular color. In the pic of the Cutlass dash, the gas gauge and speedometer clusters are reversed. I'm thinking someone stuck them in there for the picture, but the speedometer should be on the left, and gas gauge should be on the right. The 77 Cutlass dash had long horizontal rectangle air cond. vents instead of the round a/c vents (or vent balls as they're known in the Cutlass world) and a clock (optional) above the glovebox. The 77 Cutlass dash also had redesigned radio speaker grilles. Otherwise they're about the same as the 73-76 design.

The 73-76 Cutlass dash had a tendency to warp or get sticky due to sunlight and age, but they rarely crack. However the radio speaker grilles and defroster grilles are combined into one long plastic piece that screws and clips into the dash right at the base of the windshield. This plastic piece almost always cracks and good ones sell for some pretty good $$$. The 77 Cutlass dash was made out of a different vinyl than the 73-76 Cutlass dash, which cured the warp and alot of the sticky problem. However, they crack really bad when subjected to years of heat and/or extreme cold. Trade one problem for another!

I do like the 73-76 Cutlass dash design alot. I think it's one of the best in the 73-77 GM A-bodies. Interesting idea swapping in a different dash between G3's.

it would be cool, i was looking at some today and a buddy i know has a 73ish camaro dash with everything he is going to sell me and im going to see if I cant get it to work in my car, or maybe try a c10 truck one sense i can get one for under 10 bucks just for the shitz and giggles till i get the camaro lol