I have, at least, a couple of hundred "G3" pictures saved that I took from this website and others. About one fourth are copyrighted. I have an idea to make these available to members here on CD-ROM. The copyrighted ones will have to have special consideration. I figure it would cost me $8 or $10 each to make them and put them in jewel cases and mail them. I would have to put them all together in one folder from being scattered all over my hard drive. I would not make any profit on them, it's just the joy of sharing what I have. If anyone here objects to their pics being in this project, I will definately leave them out. What do you think? Would this idea work? Anyone object? Anyone interested? Bad idea? JB

I would go for a copy JB

Damned Murphy's Law. I just tossed out the last of a big box of a hundred empty jewel cases last week. Coulda sent them to you for the cost of shipping.

Did some searching on my computer today and have already found about 700 pics that I saved to compare differant paint schemes and etc. My eyes are burning so bad I can barely keep them open. I have a lot more to go, I need more interest in the project to help me make it thru all the pics. I might wind up with 2,000 or more the way it is going. Anybody else interested. JB

Update: I have been working on this project for quite a whikle now and haver found out why my computer is so slow. Too darn many pictures on it. I have made seven folders to put the pics in as follows, Monte Carlo, 4 doors, 2 doors, race cars, BTOs, wagons and El Caminos. The Elkies are finished and have about 1,400 Elkie pics. I did not know there were so many ways to indivualize Elkies! The rest should be done in a week. Anyone wants to buy at $10, PM me. Believe me I have more than $10 tied up in them. I expect to end up with over 2,000 2 doors. A great way to compare colors and wheel/stance combos, etc. JB

by chance could you post a few sample pics.

Everybody that wants one, send me your name and address by PM and I will try to ship them out Saturday. Price is $10. Send me the money AFTER you recieve them. Approximately 2,000 two doors, 1,400 Elkies, many Montes and race cars and BOP, in seperate folders. I will try to put them on a DVD, but if I can't figure out how to do that I will have to put them on 2 CDs. I will lose money on these, but a hobby is a hobby. JB

73ssbb wrote:by chance could you post a few sample pics.

also, is this by paypal.

No Paypal, I don't have an account. Personal check, USPS Money Order, cash wrapped in dark paper. Yeah, I will take the chance on it arriving without question. Remember I am on Soc Sec. These pics and computer (and my car) will go to the dump after I leave for my next destination. My kids are not into cars. JB

got ya, ill take one pm sent

Well JB I hope they really keep your Cars and such, But if not you could will them to me and they will Live on forever

Limey wrote:Well JB I hope they really keep your Cars and such, But if not you could will them to me and they will Live on forever

Yeah, but how often will the wheels be swapped to something else? Just jokeing, Limey. JB

That one would stay as is JB you have my eternal promise on that one and would Never change anything !!! 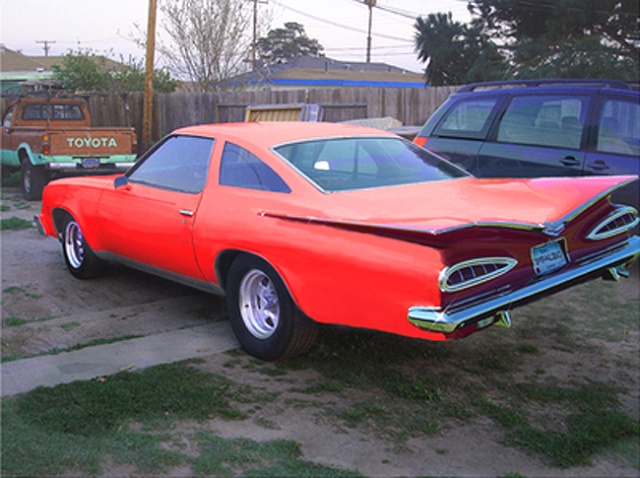 Limey wrote:plus its Kinda a limey shade already and if you opt for fender skirts oh my Classic for sure

Fender Skirts have been ordered. I believe the guy who owns the business works out of his garage. When I called, his wife was cooking dinner when she answered the phone. The business is for sale. The enclosed picture is just an example of some of the oddball photos I have. After looking at 2,000 coupes and 1,400 Elkies, no one can convince me these cars are not popular. They just do not get the recognition the 70 or 71s get. JB

Does the trunk still open on that thing? It has some cool things about it, but not really my style.

thanks for the cd its awesome.

Did you run out of cd's?

I sent you one, did you not recieve it? Give it to Tuesday night and if it has not arrived, I will send you anothwer one. JB

» I need some help again.