That's looking pretty good! I wish I had your skills. It takes some serious time to get things right.

Thanks for all the compliments.

I second all of the comments so far.

The car is looking fantastic and your attention to detail really shows.

Great job! I liked how you flipped the spare to show lettering up

She's going to sleep while I clean up and sell all these new parts. 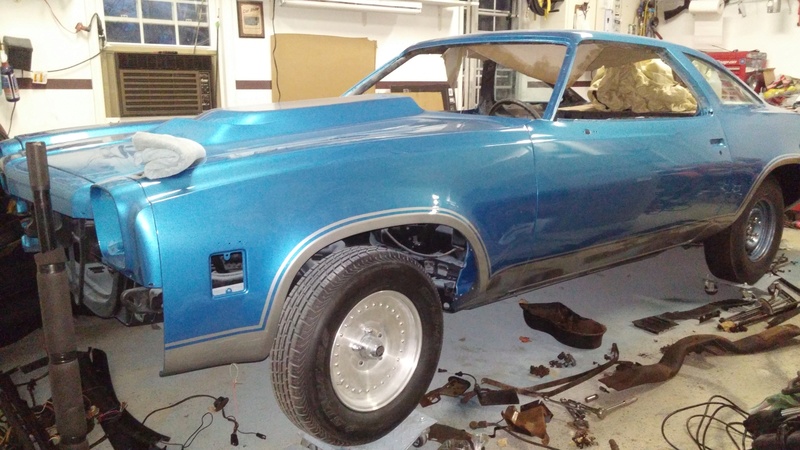 Looks good to me. At least you are finishing it and doing it right. My buddy from high school had a clean '73 SS that he had plans to do the same with. After taking everything apart and loosing interest in it. It wound up at the salvage yard. What a shame.

Thanks a lot. Its my second.and.last time doing it. Lol

Ok, just got my racing pan in the mail.  Pan is what Kevko calls a "stock appearing" pan with SCRAPER BAR, WINDAGE TRAY and (2) TRAP DOORS.  Windage tray is removable.  Also got the matching pickup for a melling high volume pump and BOLT SPREADER BARS.  Kevko said they weren't needed but would add extra insurance of no leaks.  Real happy with the quality.  Nice heavy weight.  Real rigid from the ribs on the sides. Welds are also well done. And only $95 for the pan. 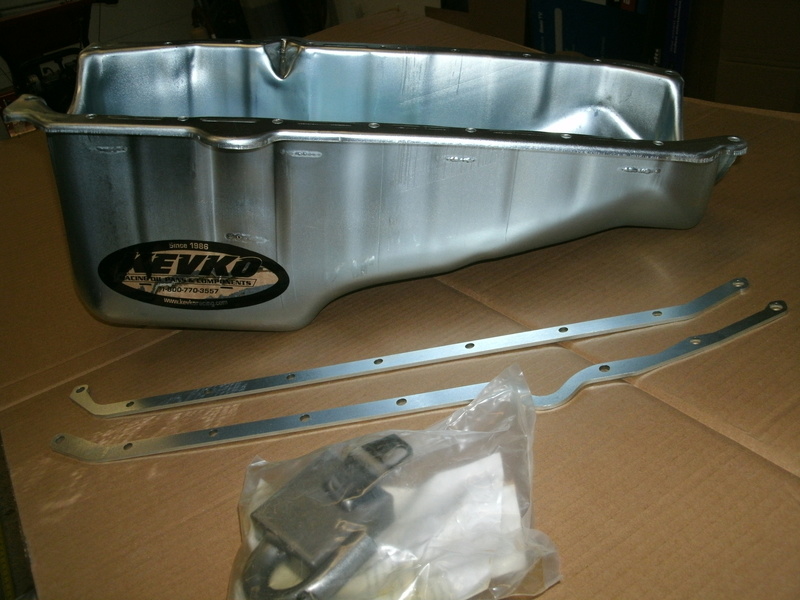 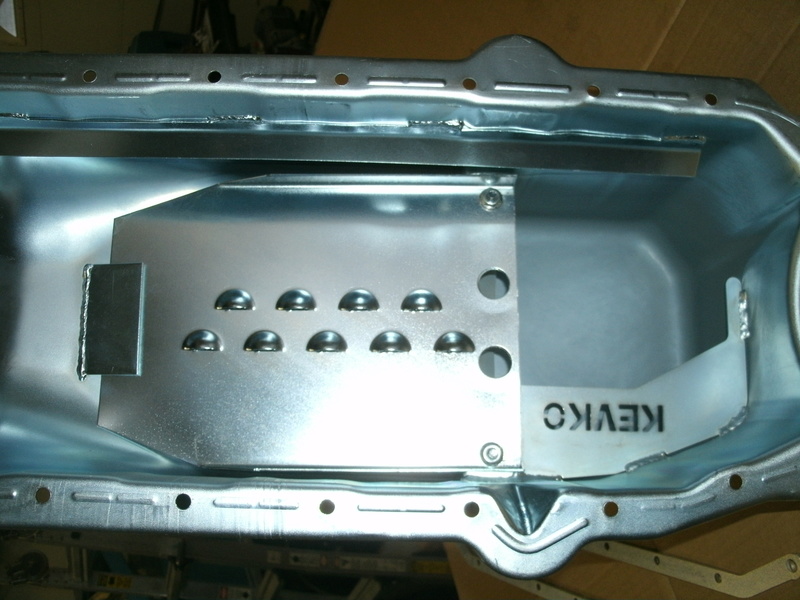 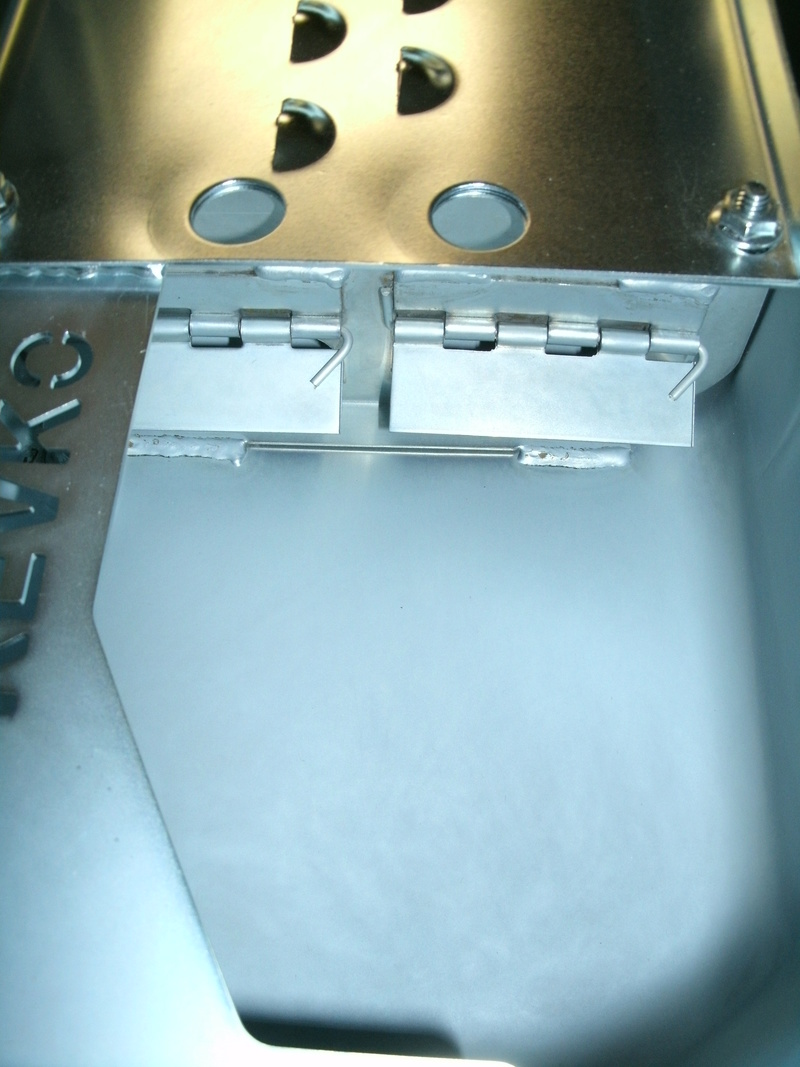 That pan is pretty cool and it looks like a sneaky stock class oval track part. Cool.

Thanks Paul. Hope all is well.

Took the hood off my car and plan on cut and buffing it maybe this week.  VERY happy with spi high solids clear.  Laid out real nice. I widened the fender side of the hood 3/16". The pic does not do the shine justice. 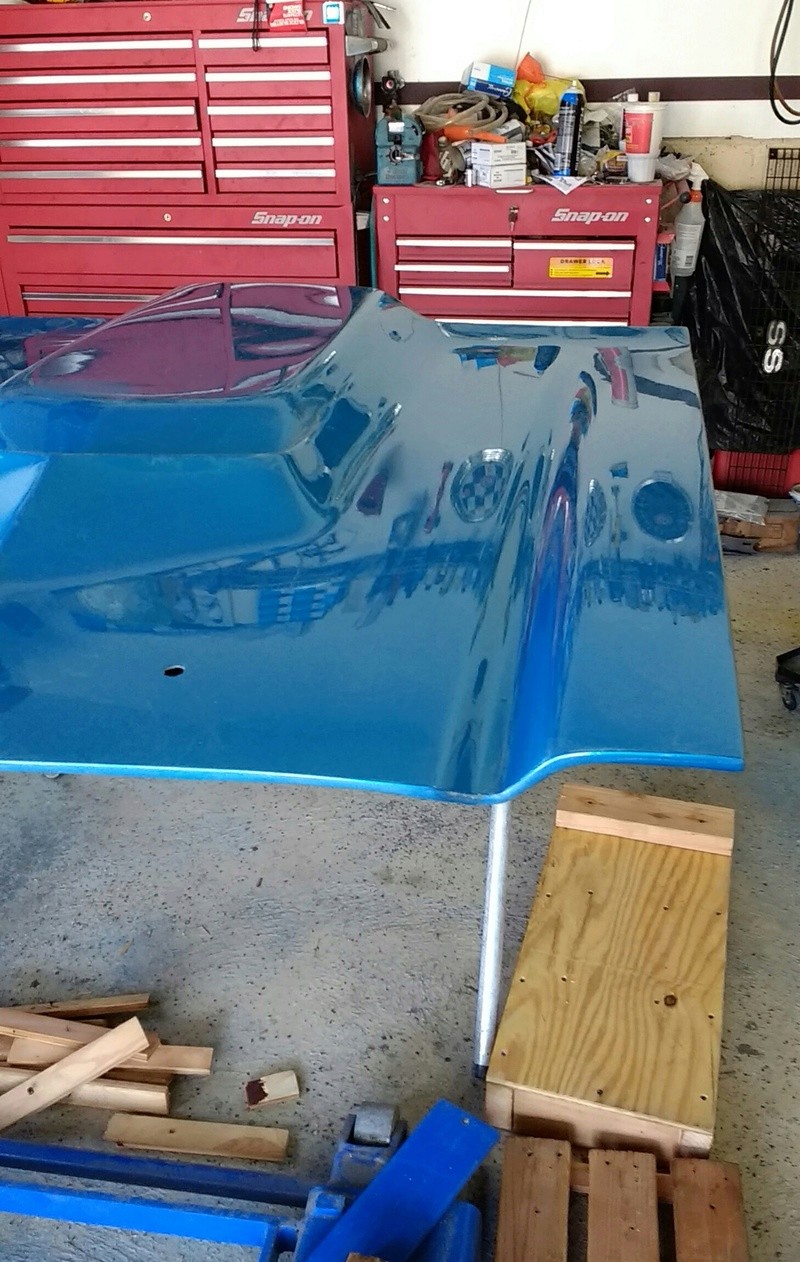 Ok, I was cleaning up some stuff in the garage and only had the garage door open.  Took a look at the chevelle and snapped a pic.  Thought I'd post it.  I painted this last October and it has not been cut and buffed yet.  Has not had a cover on it since then so its real dusty.  Pic is a little better if you click on it.

What wheel jacks are those? Can you move the car easily by yourself? I have a couple from harbor freight that work well but not sure if they will fit around the rear tire. I've always had help moving the car around but once I have it in my garage, I will probably have to try and move it by myself.

Joe if you keep posting teaser photos of that beauty I'm going to drive to your house and finish it myself! Looking awesome!

Thanks for the compliments.

The wheel jacks are the newer harbor freight ones.  Did alot of research on wheel jacks but didnt want to spend a fortune.  I bought my first set of the "diamond plate" ones from harbor freight because other forums said they were the best that HF sells and it was recommended to disassemble the wheels and lube them with wheel bearing grease.  They had steel wheels and only sleeves and no actual bearings in the wheels.  Well, they worked pretty good moving the car by myself.  I dont push or pull on the body, I grab the wheel itself to do any moving.  Worked well.
The ones you see in the pic are also from HF.  They jack up the wheel mechanically instead of hydraulically like some other models.  I didnt want the issue of fluids and seals going bad so I opted for mechanical.  Did a lot of research on these and found out that the earlier HF models of these also only had sleeves in the wheels and they should be lubed as stated above.
I found a guy selling the ones in my pic and he did not have any idea if the his dollies were the newer ones HF is selling with ball bearing wheels.  I went to look at them and sure enough they were the new ones, with ball bearing wheels and bigger wheels.  So I picked them up, took the wheels apart and lubed them up.  The ball bearings are nothing to write home about but they do a good job.  Car rolls easily with little effort.  When I first when to look at them the guy had them under his tool box.  He pulled them out with his foot and they went rolling across the shop floor.  I was a little impressed that they rolled so well.  They roll even better now that they are lubed.  One thing I have to say, before I move the car, I try to orient the wheels in the direction I want to go just to make it easier on the initial roll.  I dont think its necessary but I like to do that.

Thanks for the clarification and good to know 1 person should be able to move it alone. How wide is your rear tire? The descriptions state the jacks on fit 9" wide tires. My rear tire is between 9.5 and 10'" inches wide so I'm not sure if they will fit. My dad had some old dollys with steel wheels, those were terrible. Lol.

Tires in the pics are just rollers and they are 275/60r15 which have a section width of 10 or 10.4 if I remember correctly. The lever on these jacks are long and have a round end on them where you would step on them. The previous owner cut off the inside side of the round end on 2 of the jacks so it doesnt interfere with wide tires. Hard to explain but the end of the arm that you pump has like a 2 1/2" diameter "coin" for lack of a better term. Thats where you put your foot to pump them up. The guy remove the tire side of the coin like 12 to 6 o'clock. That way you can pump them without touching a wide tire.

Have you tested the pan in the car yet?

Not yet, but I put it side by side with my chrome pan and I don't see any issues. I was planning on building, installing and breaking in the new engine over the Easter break but everything has been put on hold for now.

Had an itch to do something, but it had to be quick and I wanted to put my intermediate shaft back into my car after its rebuild.  Took it all apart.  Spring clip is real easy.  My boot wasnt ripped so I decided to reuse it.  I already had the new rag joint waiting in my box of goodies.  So off to the glass blast cabinet it went.  Came out nice.  Wiped it down with wax and grease remover.  Shot some satin epoxy.  Massaged some Sil-glyde into the rubber boot just to rejuvenate it a bit.  Then reassembled.  Not including paint drying time, took about an hour.  But she's good to go.   THIS IS FOR A MANUAL STEERING CAR.  I dont know if power steering shafts orient the same.  Just FYI. 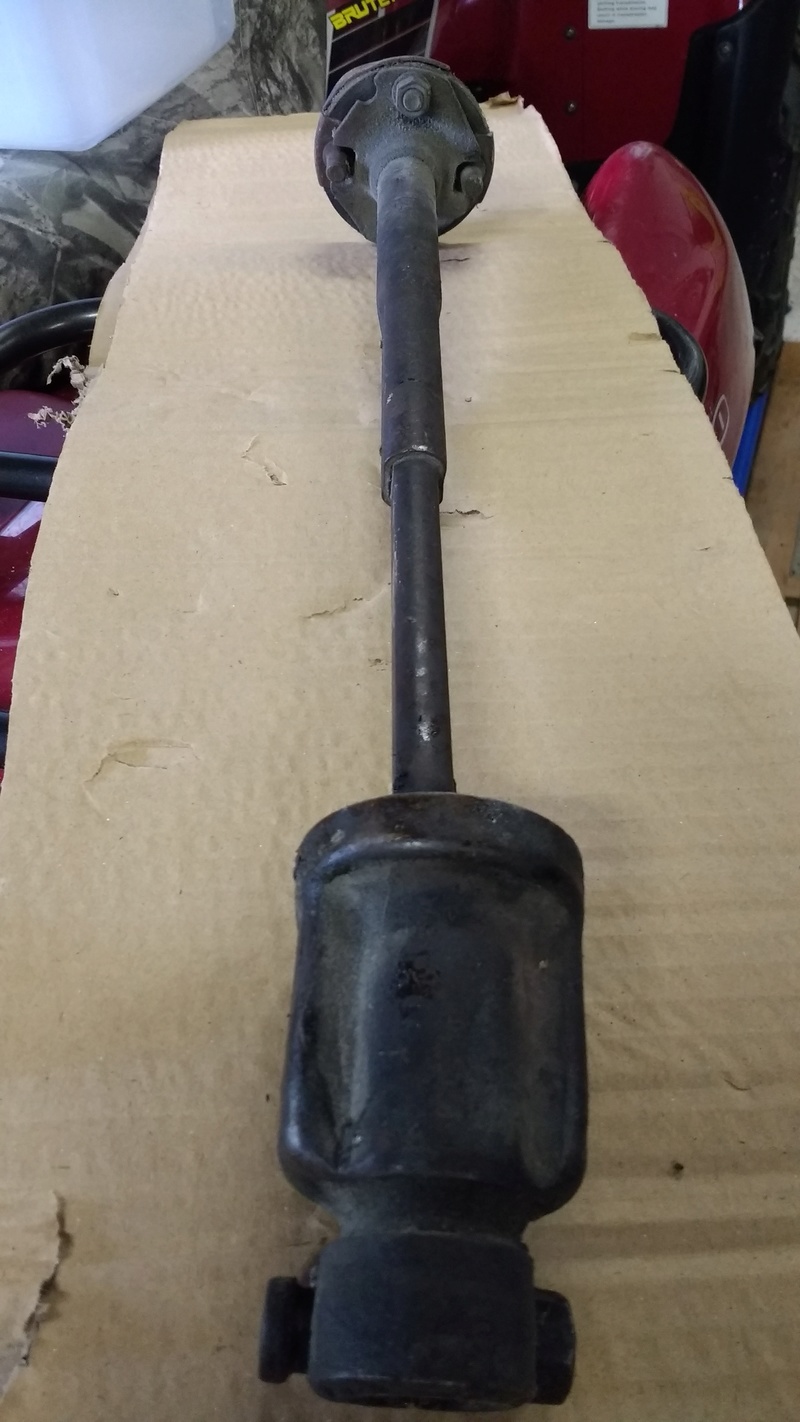 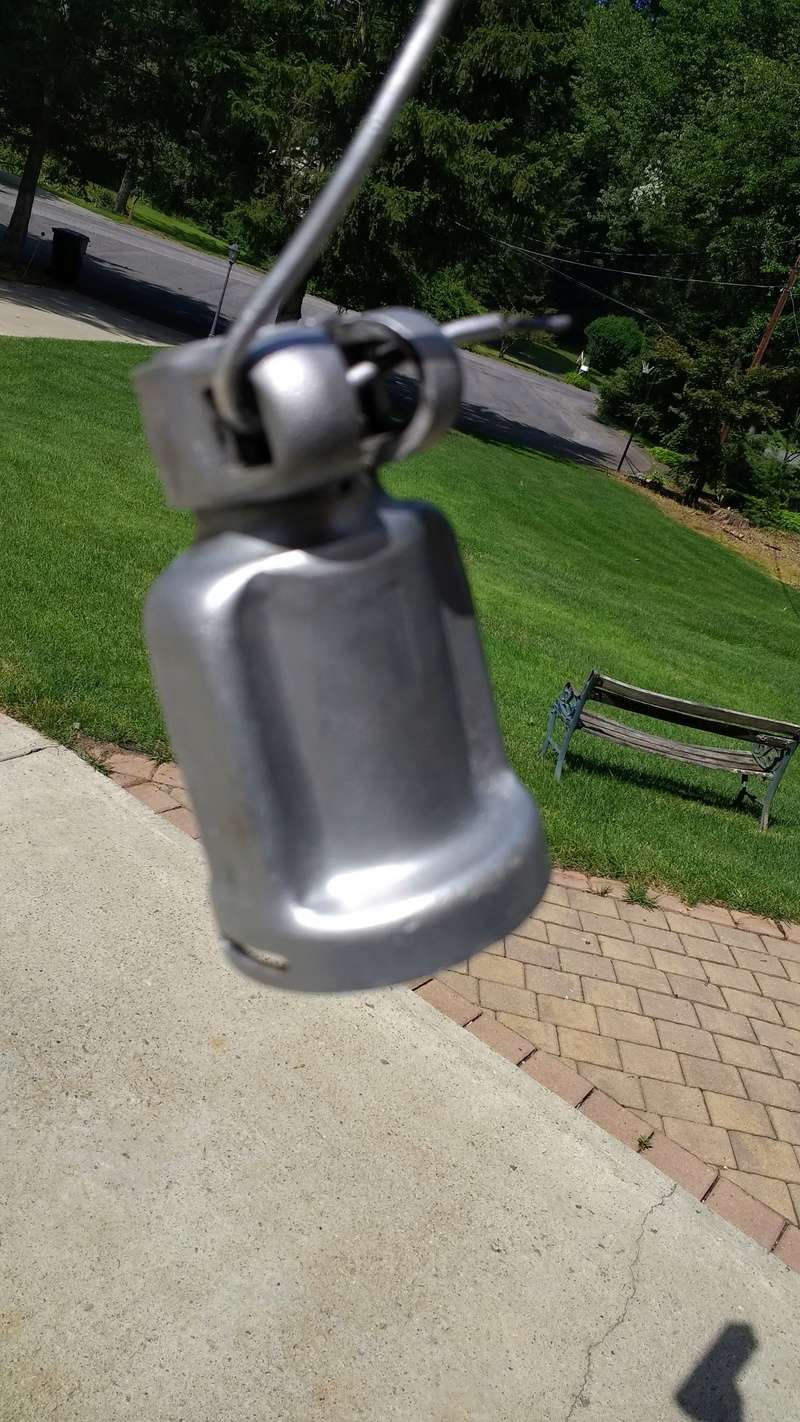 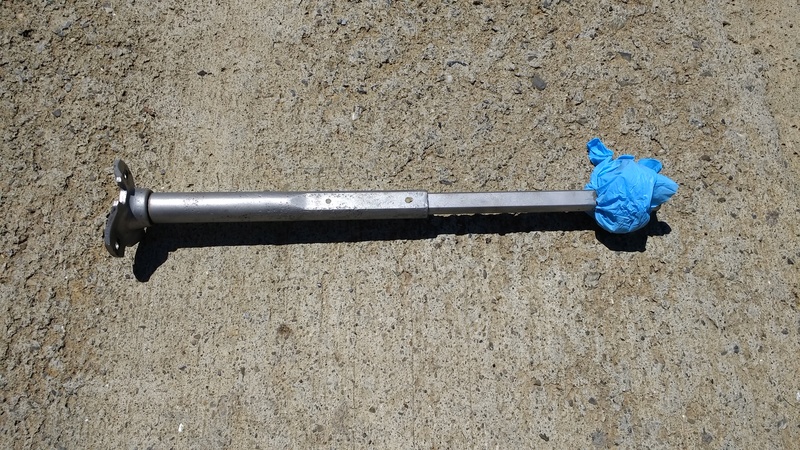 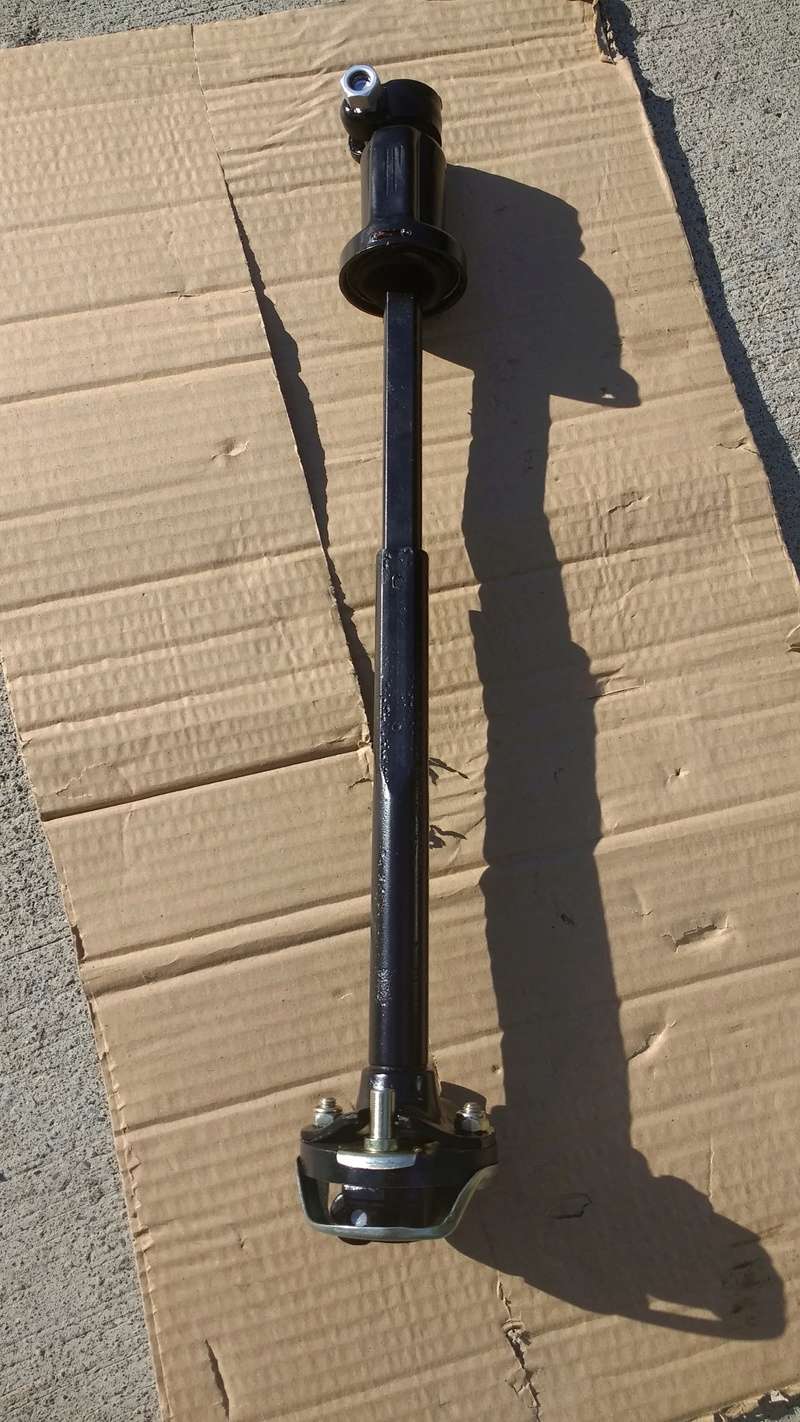 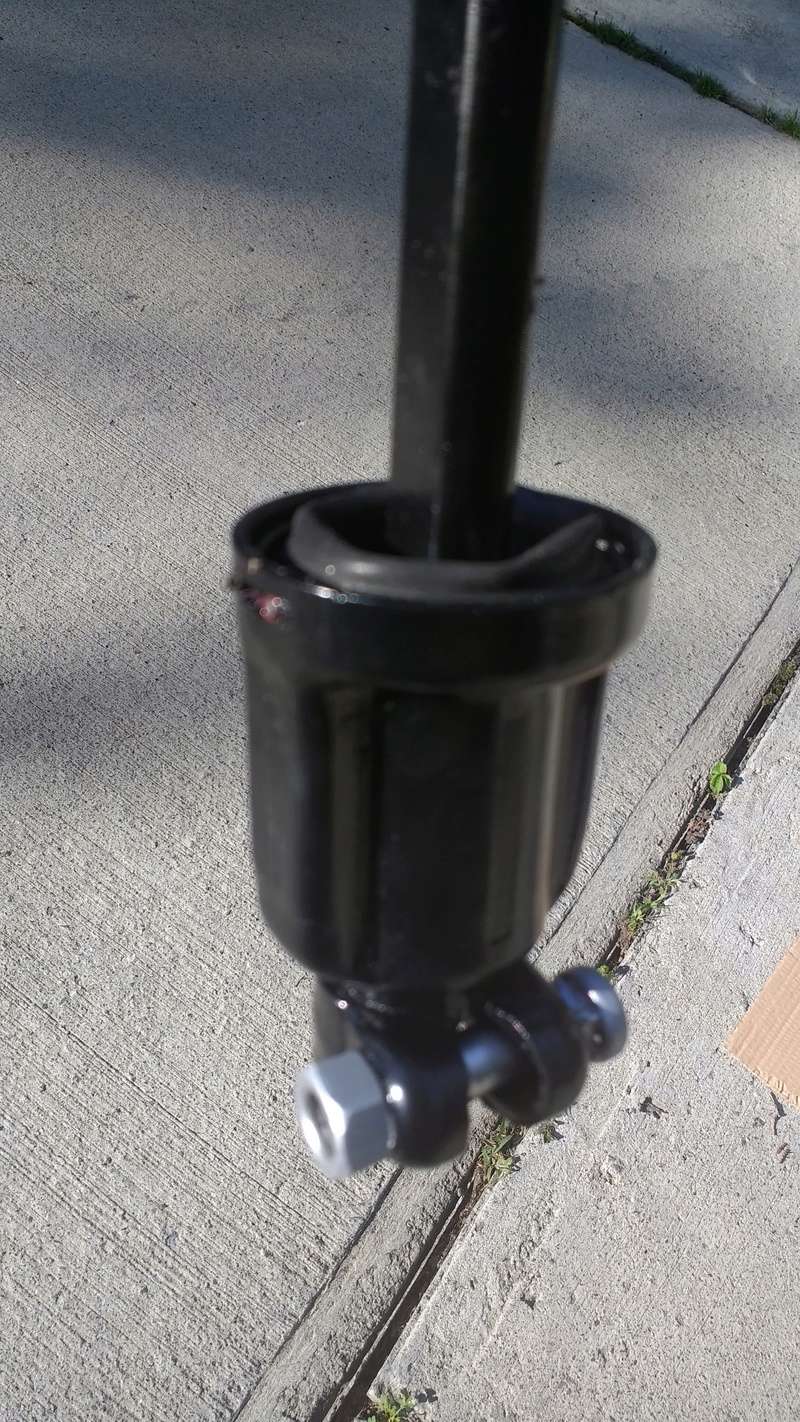 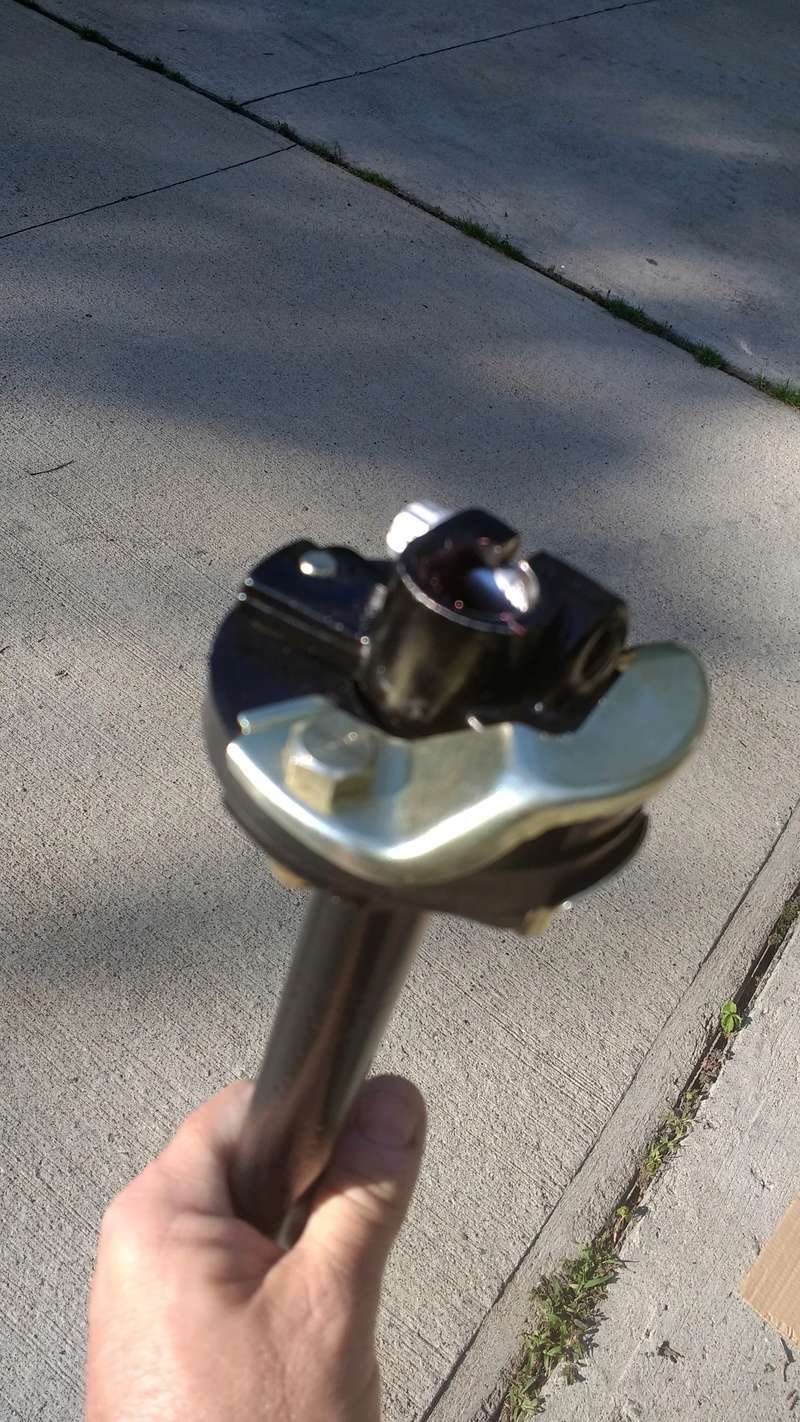 » What to do about rust stained seat belts

Yesterday at 9:35 am by brownbomber77