Some of you know I tried to run down my first car a few years ago...1974 Malibu Classic, chocolate brown with tan swivel bucket interior, 350/350

But I missed MY car. So went in search of another Malibu Classic. It took me a couple of years to find the right car. I wanted another 74, but the only ones I could find were junk.
It's sad how many G3 cars ended up as demo derby cars or "customized" beyond repair.
I finally found the 77 last March...

LITERALLY found it in a barn in Tennessee. You can see the corner of the barn in the pick.42,000 miles, I'm the third owner. The fine southern gent I bought it from is named Dixie, he's in his late 80's. He worked for GM in the Caddy plant in Detroit from 1959 to 1990. After he retired, he moved back to TN and bought the car at the original owners estate sale. Her name was Mable. Dixie cleaned it up and drove it around on weekends for a while. He had it repainted the original color and parked it back in the barn under a tarp in 1998. He'd go out and start it every week or two. I have the original window sticker, sales recpt and service records form the dealer that Ms. Mable bought the car from and took it to for service. The build sheet is still under the front bench. I got it for $4,000.

Anyway, I thought about it for a while and even asked you guys if I should modify a car like that. Decision made.

First thing I did was swap out the 77 front end for 74 last fall...piece o  cake

I've spent a couple of months accumulating parts. I've got the swivels, console ,shifter etc and have been trying to find the right color interior dyes and paints.

I'm planning on starting the interior swap this week or next. I'll try to do a pretty detailed job of it to post here, since I've had a heckuva time getting info about brackets, seat placement etc.

I have to decide whether to keep the original 77 "Buckskin" gold color or paint it 74 dark brown metallic...opinions?

I also have come across a 73 Laguna front end I MIGHT use...can't decide, does anyone know if a 74 'Guna grille will fit in a 73 nose? I don't know if I like the round turn signals or the square.

I'm also planning an engine upgrade from the 305. I will probably keep it looking as stock as possibe, kind of a sleeper thing but I Might even get crazy and go 454.

Only difference in Guna grille ie 73 has round turns compared to the squares of the 74 same grill mounts other than that first in line for that 77 grille sir !

That is what the color on mine was before a previous owner repainted it. I'm jealous just looking at it !!

Just tell yourself that you would have repainted your old car to this color if you had kept it!! It is just gorgeous and you don't see many vehicles this color anyway.

So the general consensus so far is to keep the original Buckskin paint?

Kinda surprised. It's growing on me, but I wasn't crazy about it in the beginning. Hmmm.

I've found these brackets originally intended to swap buckets for bench in 68-72 chevelles. They're short by about an inch and a half, but I think I can cut them and weld them in to hold the swivels. I just bolted them into the floor of the Laguna and used washers to prop up the front legs. I want to do this one right, so I'll spring for the brackets and modify them to fit.

Same with the console brackets. I figure I can modify them to use for either the original Chvelle console or any G3GM car.

I've got three consoles/shifters, 2 kinda busted up Chevelle that I can combine or repair and a Cutlass.
This is where I'm having a hard time finding the right dye to use to match the rest of the interior.

The cutlass console is nice, but you will have to remove the heater deflector on the top of the d/s tunnel to use it.  As for seat mounting, I always make stuff like that myself, cheaper & you can't see it when installed.

dynchel wrote:The cutlass console is nice, but you will have to remove the heater deflector on the top of the d/s tunnel to use it.  As for seat mounting, I always make stuff like that myself, cheaper & you can't see it when installed.

True, but finding the right steel and then massaging it correctly would require talent. I don't have any.

I did that with the Laguna and just couldn't get it right. 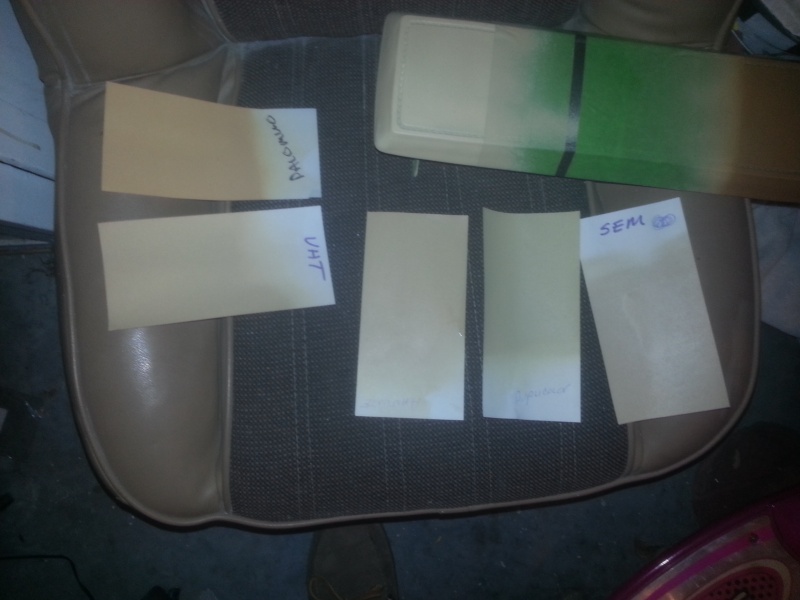 
Here are the dye samples, none are that close. VHT, Duplicolor and Plasticote Buckskin, SEM Palomino and Buckskin. Most are too light, some are too orange-ish. I was going to try and dye the console the darker color (same as the dash) and the seat inserts to mach the lighter color of the rest of the interior.

This is what I have. 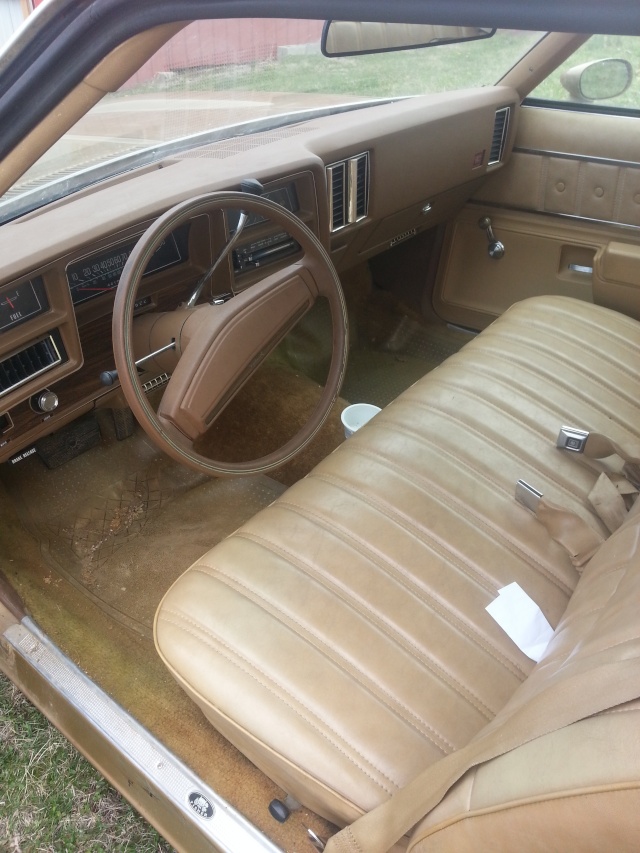 This is where I'm trying to get 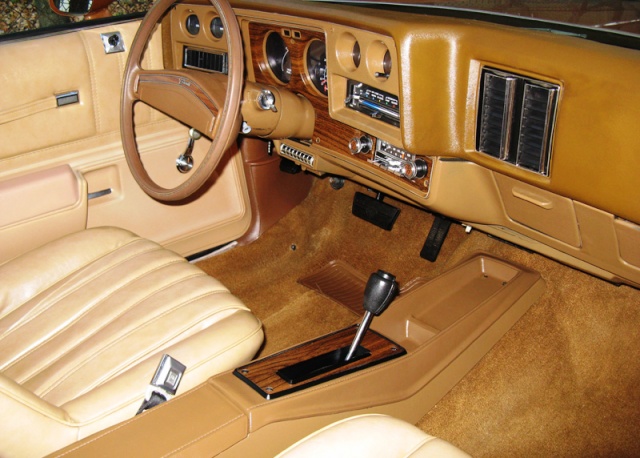 If I can't get closer on the colors, I'm headed for the body shop and/or upholsterer

I'd keep the original exterior color, very 70s vibe to it. I love the original dash, column, and panel color. Maybe go with lighter shade on the swivels and back seat...in the pic you posted.

Dave (THE Dave) IS here...or at least he was yesterday.

I got this today...need to decide whether or not to go with it. 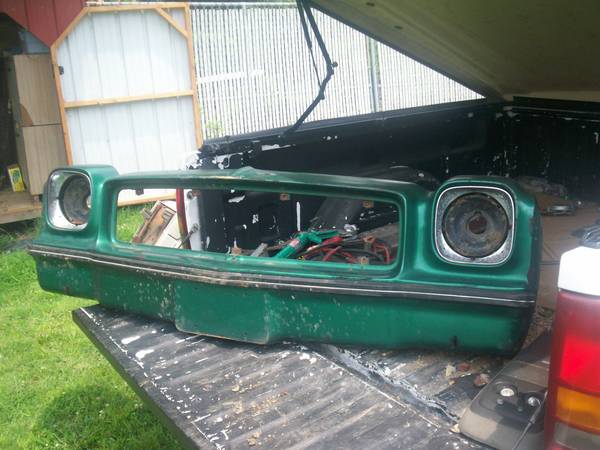 Personally, I like what you got going on now.

You guys have convinced me to keep the original paint color (despite what Mrs. Captain voted for

) so ya'll definitely could talk me out of the 'guna nose too.

I've got to get the 74 headlight buckets painted to match better, so I will probably get the guna nose done at the same time. That way I can swap every other year

Hey you do what you like- just my opinion.  Do you have the grille & lights for the 73 grille?  Hows the "innards" in the light housing, etc?

Hey you do what you like- just my opinion.  Do you have the grille & lights for the 73 grille?  Hows the "innards" in the light housing, etc?

I've got everything needed to mount it (I think) and the rubber strip is even nice. The chrome around the headlights is pitted, but fixable. No grille, but I think I like the 74 a little better anyway. Bunches on ebay of both 73-74.

I have at least solved part of the mystery of the two-tone interior.
I THOUGHT I had buckskin dash,wheel and carpet with Lt. Buckskin seats, headliner etc. That's what I mistakenly thought it said on the orig window sticker and from various sites around the web.

(BTW, the old Doc and Spiral site appears to be out of service. I can pull it up, then some other site knocks it off after about five seconds. It's a shame because that was a great resource for Chevelle and Laguna)

I finally went to the GM Heritage Center and discovered that for 77, the interior I have is actually buckskin and saddle. The saddle color for 77 is NOT the same as as the earlier  years. It's darker. So I've got some SEM Saddle and OER "Dark Saddle" dyes on the way.

For those that may have a tan or brown interior, GM used numerous different shades of brown from year to year in different cars. So "Buckskin" was used in chevelle, camaro,corvette, Regal, Cutlass, Trans Am etc.

I know a lot of you guys are aware of this, but I posted because some may not and it gets darn confusing.

So the dash, carpet and console are/will be 1977 "Saddle" while the seats etc. are Buckskin. Similar to the Monte interior I posted last week.

I can't figure out exactly when GM went to two tone interior options, but I THINK it was 76. Wally know that maybe?

As far as the Laguna nose, I talked to my paint guy and he thinks he can match both it and the 74 headlight buckets to the car. I'm gonna have him paint both, then decide which to use later. What the hell, I may switch 'em out every few months.

Side note: Picked this up off ebay. Way too expensive, but how could I say no?? I nearly passed out when I saw it. 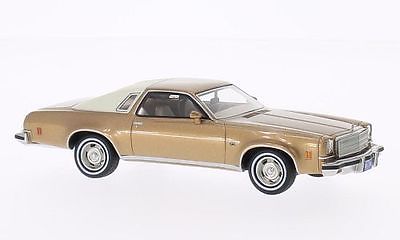 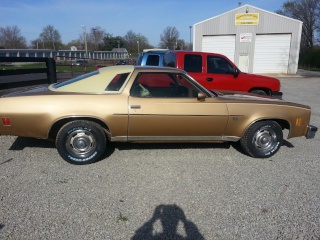 I always thought it just changed color from the sun. So its supposed to not perfectly match?

Below is the link to GMHC-Vehicle Info Kits. They have each model year broken down, including Monte

77 Monte is even more confusing. You had to get certain interiors to go with the exterior color and the package...S vs. Landau etc. The "light buckskin" color offered with Monte is just "buckskin" on malibu...same color. It wouldn't surprise me if that same color was medium beige, sandalwood or light saddle on an Olds or a Pontiac.

Thanks for the info. I did not know this. The link it cool Also.

Been hitting the interior off and on between crappy weather and working on the house. 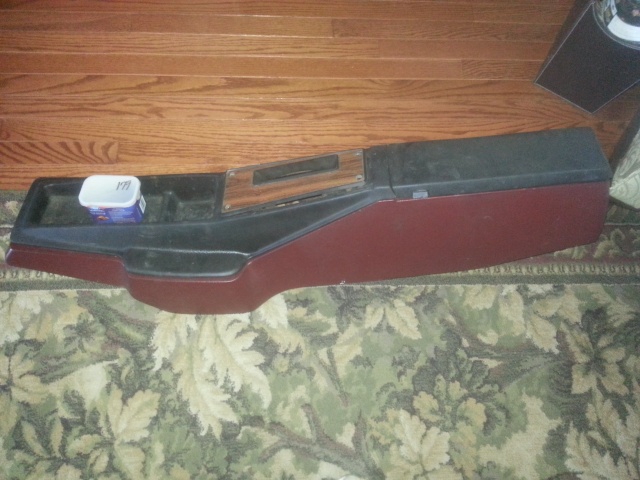 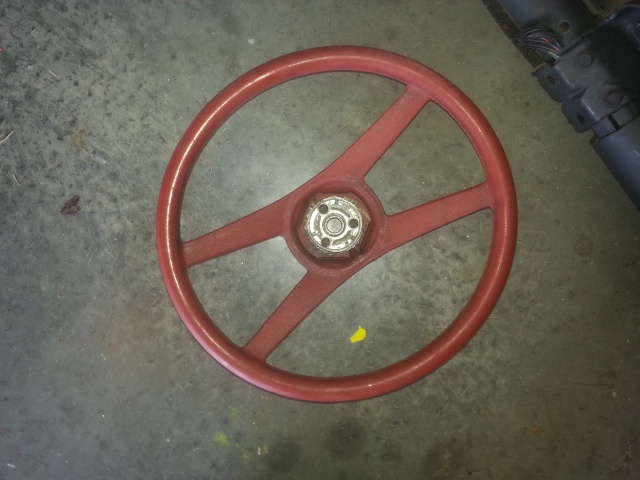 
I've painted the floor shift column and a sport steering wheel. MIGHT us the sport, but will probably keep the stock wheel in place. The closest dye match was OER Saddle. 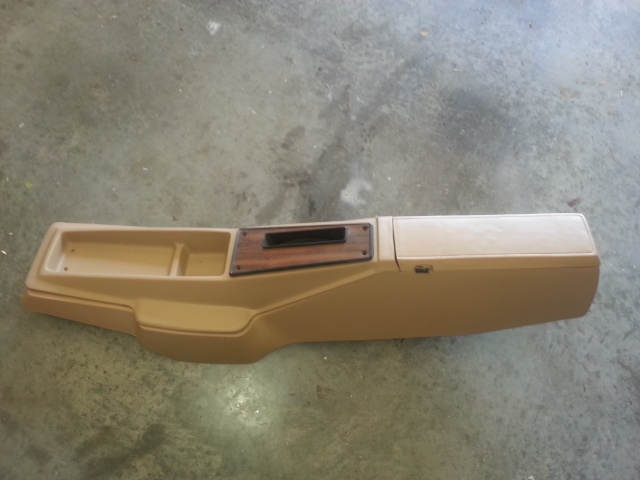 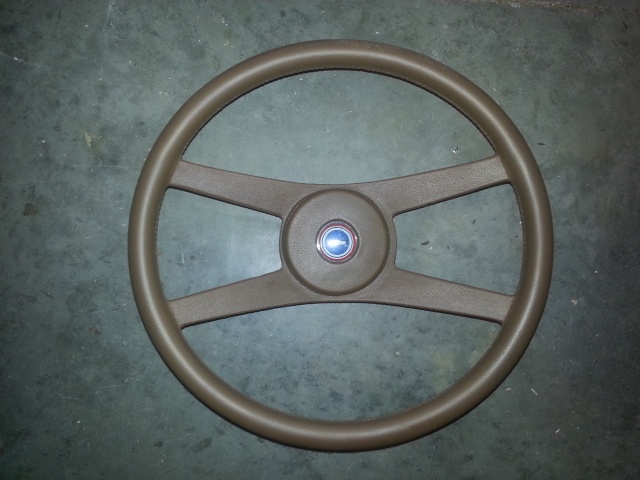 
And I've got the drivers side swivel in. I went with bolting it in place. My welding skills just suck too much to attempt brackets. 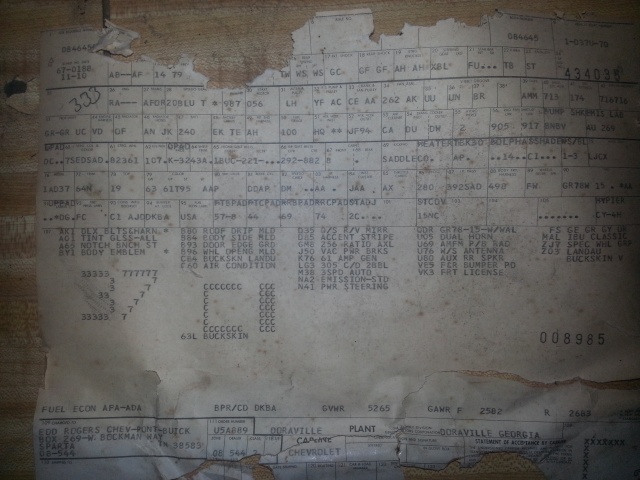 
I also was able to get the build sheet out from under the bench without too much damage, but the mice had worked on it a little. 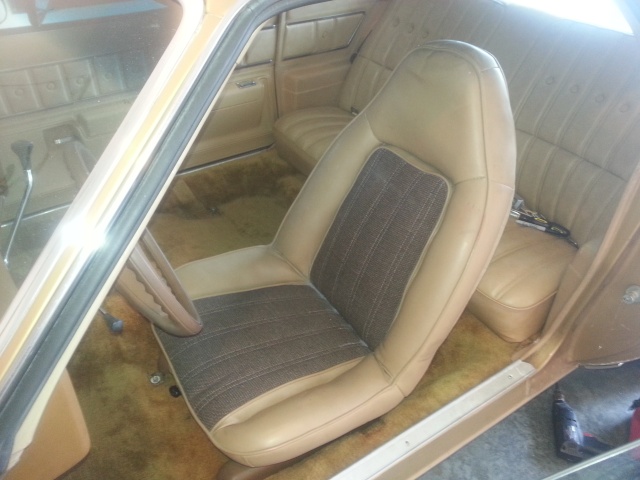 I've got many of the original documents from the car, I'll scan and post better copies of this and the others if anyone is interested.

I plan on getting the other seat in tomorrow, then hopefully get to the column and shifter later this week.

I've also got a set of seatbelts for the swivels, but attempts at dying the webbing from black to tan have failed miserably. I think I'm gonna go with some aftermarket lap belts until I can re-web (per outstanding instructions from Mcarlo77/Steve).

I just previewed the post and the pics are jumbled up for some reason, but you get the idea.

Congrats on the build sheet! I'm still holding out to find one in my drivers door or over the gas tank which are about the only things left to take apart.

That dye job looks pi$$er- is that in a spray can or how does it come?

Thanks...really happy about the build sheet.

Just spray cans. They call it dye, but it's really just flexible paint. I love the stuff. I've done seats, consoles, door panels and all kinda interior with it. Hasn't let me down yet.
It's easy too, usually just a 2 beer job!

I color changed my '60 olds' interior from a turquoise and silver to red and white.  It took some prep time and masking(two tone) but it was straight forward and pretty easy to do

If you haven't finished at least the second beer, admire longer.

Similar topics
» My Dandys / My VW T25 Projects
» How to build a tuteur
» Need to Build a bin
» Build a Lab Quality Distillation Apparatus.
» First build is progressing