My name is Erich.
I am rebuilding/restomoding a 1976 Chevrolet laguna s-3.
I was accually surprised to find a website dedicated strictly to these cars as they are far from the most well known or popular vehicles. but I do find that the people who love them are extremely passionate about them.

I would love to see my car brought back to its former glory and then some. It was a one owner car and had 80,000 on it and almost all original.

Thank you for letting me join the site. 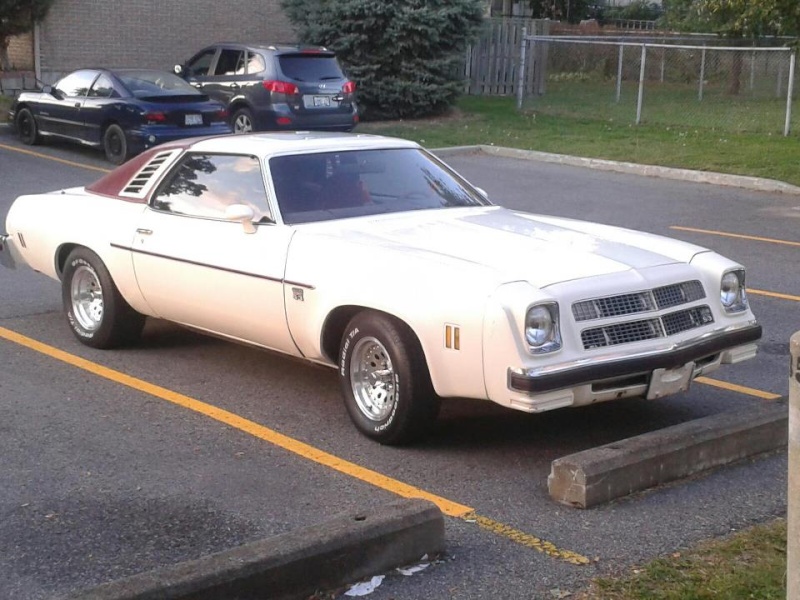 Dont forget some PIC's when you are able. Welcome to the site.

Welcome Erich! You'll find a lot of helpful people here and a lot of knowledge!

My name is Erich.
I am rebuilding/restomoding a 1976 Chevrolet laguna s-3.
I was accually surprised to find a website dedicated strictly to these cars as they are far from the most well known or popular vehicles. but I do find that the people who love them are extremely passionate about them.

We are passionate (nuts), and you probably will be too, if you aren't already. And they are getting more popular all of the time. We just can't decide whether that's good or not

Sssshhh!  Don't tell him that yet!  You'll scare him off.  Let him figure it out on his own.

Sssshhh!  Don't tell him that yet!  You'll scare him off.  Let him figure it out on his own.

HA! It's obvious to any "normal" person reading any thread that we ain't right in the head.
He's probably already nuts anyway, he bought the car after all.

Lmao, that's exactly how I feel. I just haaaaddd to buy a laguna. says a lot. lol

Welcome to the Nut House!

I read your blog, i didnt think there were any other lagunas in ottawa anymore. ive only seen mine here with the original owner for over 10 years, then last year i saw a 75' out in greely at the wicked garage auto show

That's cause I bought them all up for parts or scrap! I bought a lot of parts off of a 75 Laguna they had at Spirak auto wreckers in Greely, I bought a 75 malibu off of a neighbor, a 75 Monte Carlo off of another neighbor. I bought a 75 Laguna from a kid in Bells Corners. I found a 74 Laguna off of Fallowfield rd that I wanted to buy the front nose off of it but the guy was asking too much for it. I relieved parts off a 74 Laguna that was at Dexter Bar Cartage ( he used it as an enduro car). I know of a black 75/76 Laguna in Manotick, there was a copper 75 Laguna that was a friend of mine in the Bashore area. I bought parts off of a 75 malibu in Sharbot Lake ( 45 min north of Kingston). There was a yard up by the HWY417 truck stop. Union auto parts had a couple 73-77s in their yard I bought parts off of. Stevens Auto wreckers had a few. There was a 75 Laguna at a little garage in Richmond. A friend of my Dad donated his 77 malibu to me, I stripped that one. I'm sure there's more but I can't remember them all!
But that's totally cool that you're in Ottawa! I moved to Pittsburgh in 2001. I have only ever seen 3 other G3s ...two on seperate occasions at the Canfield Ohio parts o Rama, and one cruising around Pittsburgh. Mine seems to have been the only one on the road in Ottawa that I knew of. I hit all the car show spots in the West end.... Bank st. Canadian Tire at bank and Herron, Place D-Orleans, Canadian Tire on Hunt Club/Merivale, there were cruises in Manotick, Stittsville, Barhaven, Bashore, Bells Corners, more, those were ones I was a regular at. Cruises here are huge!! They block off the main drag of a local town, thousand cars! Lined both sides of the street. Haven't gone recently.... Kinda a bummer going without the car (under construction).
Soon though I hope!

theres a red 76 in limoge but its just rust, theres a red 75 in Gatineau that's being build with a 503, and a white 73 just across the river but the guy wants too much for junk, but it has the cowl induction hood I want. so I try to keep track.

yeah last year the guy who built my engine said it would take no longer then 2 weeks and it took him six months.
so I went to a few cars shows without mine and missed a bunch, really wasn't as much fun. but everyone in Ottawa seems to know where my car was parked the last 40 years so when I show up with a brand new engine itll catch some eyes.

I was told the original owner pretty well kept in in the laneway and washed it every day.

Yours was in a lane way by the road as you enter Greely...right?

no mine was on baseline near Algonquin college

There was a guy on baseline that had a hacked up 74 Laguna, he gutted the inside , made a flat floor and huge long trans tunnel out of aluminum, it never saw the road. I don't think I've ever seen yours even though it was practically in my backyard!!

i want to flatten out the truck and I need a new floor pan. you can pick them up online for about 350 so its not bad. but I want to do some slight modern touches. nothing too fancy. I thing the heaviest mod I would do is tub the wheel wells. juts to get some nice fat tires on there.

You can get a pretty big tire in these cars the way they are. With the right offset, I bet you could fit 10" wides in the rear.

dynchel wrote:You can get a pretty big tire in these cars the way they are.  With the right offset, I bet you could fit 10" wides in the rear.

but I want to find something with a better speed rating, right now im rated for 118 mph and she goes faster then that by a bit.

really ? with no modifications?

really ? with no modifications?

I just took a look and all the ones I saw were drag tires, who would make one that size but for street driving?

Latest topics
» my other projects besides the lemans