Dad bought a '73 Chevelle SS 350 wagon new off the showroom floor and that was the family car raising two kids and a dog traveling the US during dad's Navy transfers. Took my drivers test in the wagon and occasional high school race. My late teens through mid 20s owned a '73 Chevelle SS 350 coupe and now back to a station wagon, '73 SS 454 wagon twin to my childhood car of dad's. 1973 Chevelles are very sentimental for me.

I was into muscle cars before I even knew it. My dad owned a few throughout the years and that must've instilled something in me. When the opportunity came to buy a 74 for a very reasonable price, I couldn't pass it up. I knew it wasn't the "muscle car" that most people think of, but I knew it had potential. Today I still believe it has potential, even though I've driven it just over a mile in the 10 year I've owned it, and have no idea when it will ever be finished. They're good cars.

I'm an el camino guy first. When I finally got to looking around to get one, I kept thinking I wanted a 67-72 version. But the more I looked, I couldn't deny that the 73-77s just looked cooler all the way around. When I saw the ad for mine, I knew it had to be the one. Only after did I find that ownership was going to be more challenging, and somehow that has only made it better. Hunting parts, mixing and matching, it is all part of the fun. Every time I see another shiny camaro or 69 el camino in a show, sure it looks great but I think all I need is cash to do that. With our cars, lots of cash may or may not get you your parts. So I've been very happy with my 75 and all its challenges. 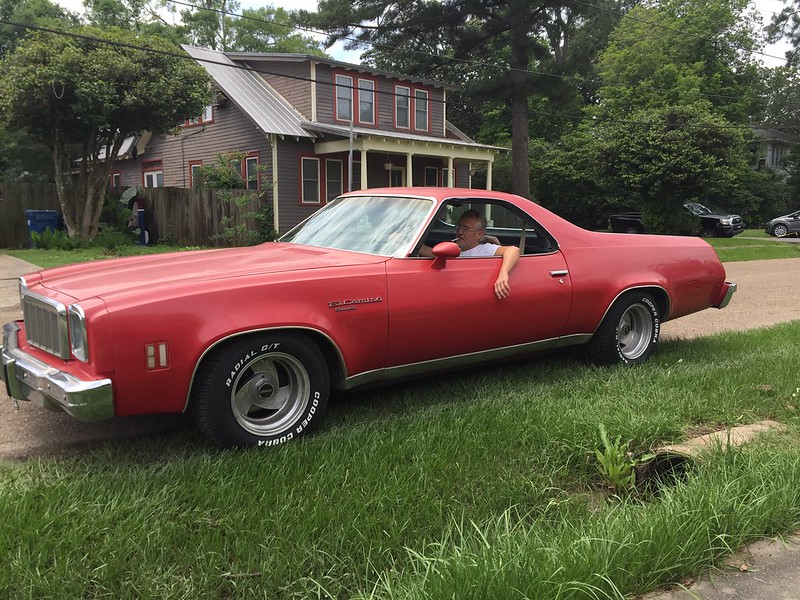 Good point.
Part of the fun for me is scouring the web and the yards looking for parts. I had those 60s Mustangs, and all it took was a few clicks and dollars and the parts were on the porch. Kinda dull.

I've had my 77 25 years this year. I like it because it's what I grew up with. My dad had a new Cutlass Supreme in 1973 then it got stolen and stripped. It was a nice car ,had white interior and plumb color outside with a white top. It got replaced with a 75 Monte Carlo that we had for years but tin worm got to it. He bought me the 77 since he could not give me the 75. The 73 I bought right after buying my home with 2 car garage and it kind of replaced the now gone 75. If I knew what I was doing back then the 75 would still be with me too. Anyway I love driving them,still a treat after a long winter. Brings me back to my childhood and teenage years. I've got plenty of tunes in there too,mostly 70s and early 80s rock and disco.

FYI for those of you younger guys Monte Carlo or Cutlass Supreme had to have disco in it. Both the car and the music went hand in hand my buddies call my cars The disco Monte Carlos!

Bought mine brand new. It was ordered by the dealer as a Factory Loaded Demo Drive package. It's been a great car over these many years. My son's grew up and learned to drive with the Malibu, dated and probably other unmentionables. Over the years I have updated or late modeled the Classic to improve handling and performance.
Its an all original car in appearance including the Half vinyl top. "vinyl trim is almost impossible to locate" installed a lot of upgrades, 4 wheel disc, springs, sway bars, and of course larger rims and tires. Have a stroker motor with fuel injection and R4 transmission with manual lock out I done myself and added a oil pressure gage where the clock was located, have also installed white faces on all the original working gages--seems they were getting terribly hard for me to see. LOL.
I enjoy going to occasional local car shows or taking a long road trip to anywhere and most likely its going to be the "Only G3" in attendance.

I always receive gracious comments where ever I attend.

Just wish we could get some of the after market suppliers to produce more affordable parts. These cars are and will continue to grow in popularity.

Thanks guys for great stories on your G3. Hope to see many more.

I've owned three G3s so far, two 75 Laguna and now a 74 Laguna. I like the looks and the better ride and handling compared to the 72 and older cars. A lot of the car media publications forget that the 72s and older had pretty archaic front end geometry, which GM fixed on the 73s when radial tires came into vogue. I've got a 65 Malibu SS and I can guarantee the handling is worse.

Yeah, I know G3s are heavier. And can be slower. But you're pretty much limited only by your imagination and budget. And availability of parts, like interior stuff.

I've always like the Lagunas. I'm 62 so I remember the aero wars in NASCAR. When Ford made the Talledaga, only a few came out and you had to know someone (basically not for the general public). Likewise with the Charger Daytonas. Same things with the tunnel port Fords.

But when GM came out with their aero improvements, anyone with the money could own one. Even with a two barrel 307 if that's what you wanted. I always liked that attitude.

Always in the back of my imagination is a 75 Laguna with a Daytona Charger wing and an Arias hemi headed big block chevy motor. Basically a NASCAR "might have been".

I love these stories.

My paernts bought a green 74 chevelle when we moved here to ariz. In '78. They held on to it until my sister who is 3 yrs. older than me got the car on her 16th birthday. We both used that car to learn how to drive. When she turned 18, she used it on a trade in. I was devasted, i assumed it would be mine when i turned 16. My parents felt bad, and promised me if i did better in school, they would look for one. I cleaned up my act, and improved my grades. Shortly after i turned 16 my dad found a 1969 mach 1 mustang, i pleaded with him not to buy it. (Sorry, but i hate all mustangs). 4 months later he found a 1 owner 2 door 74 chevelle/malibu. It was white, had the white stripped tires, hubcaps,and sunscreens in the back triangular windows. It was bought for $300.00, from an elderly lady. That was 1988-1989, it still own that car. I also have a 73 gmc sprint, and a 76 gmc sprint. I was letting my son use the 76, until i recently took it away. I was sickened by the way he drove, and abused that car. My 74 is currently in pieces, so im gonna use the 76 sprint to put my chevelle back together.

My 74' was my first car, my dads friend was selling it for $3000 my dad bought it for $2,500 for him to work on. Then my grandfather wanted to do a pro tour build with my dad to his 64' chevelle so my dad gave me the 74' for my first car. I learned absolutely everything about cars from this car. How to rebuild suspension, change oil, rebuild carbs, pull out transmissions. Learned a little of welding and learned a ton of body work after spending all summer sanding and painting in a buddies shop.

I just noticed I didn't include the year of my 1976 Malibu Classic that I bought new. Guess the mind slips a bit after a few years. LOL

I was like most looking for a 67 to 72 but they have been bid up so much and need a lot of work. I like the G body but you have please the smog police and I want to build horse power. I started looking at 73-75 el Caminos. I looked at all of the traditional muscle car but my issue was still budget and most were too expensive or needed too much work. I finale came across a 74 el Camino SS 454 for 1000 dollars a few miles from me.I told my wife about it and she said buy for our anniversary. It runs and drives, I drove it home. It's an A/C car/truck with power windows. Once I started to read about the 73-77 A bodies I that I really like them over the previous generation. Front disc brakes, radial tuned suspension, better front-end geometry make it a better platform to start with. The 454 is down on power but adding a turbo charger will take care of that and won't cost the 6 digits for a 70 chevelle 454. So I'm a big believer of the 73-77 A bodies in whatever flavor you like.

As a child of 1970 I can remember my uncle having a blue 4dr '75 I think; but the one that always got me was the friend of my dad's that had a white '76 Laguna with red (Firethorn) interior and a red stripe on the side (I'm thinking it was an Olympic edition) Also not to be forgotten is the Galaxy 500 my uncle had butter yellow with side pipes, I just couldn't buy a F**d.

For me the G3 was the first car I bought for my self. My brother had given me a 1963 Pontiac Catalina convertible for my 16th Birthday. He had rebuilt the engine and was working on body when he gave it to me. The transmission was slipping bad and I wanted some thing more sporty. I saw a 1973 Malibu for sale. It had dual exhaust 350 and A/C. light green white top. See photos of actual car. 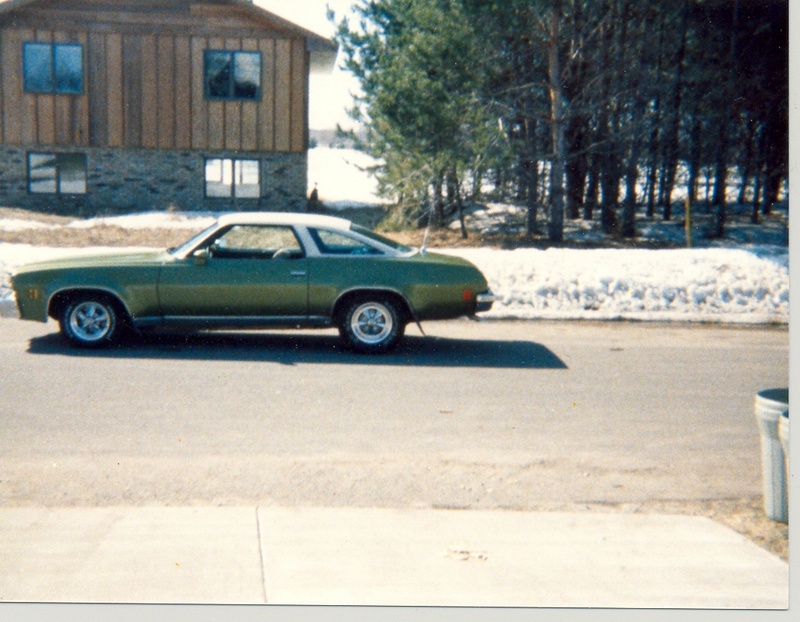 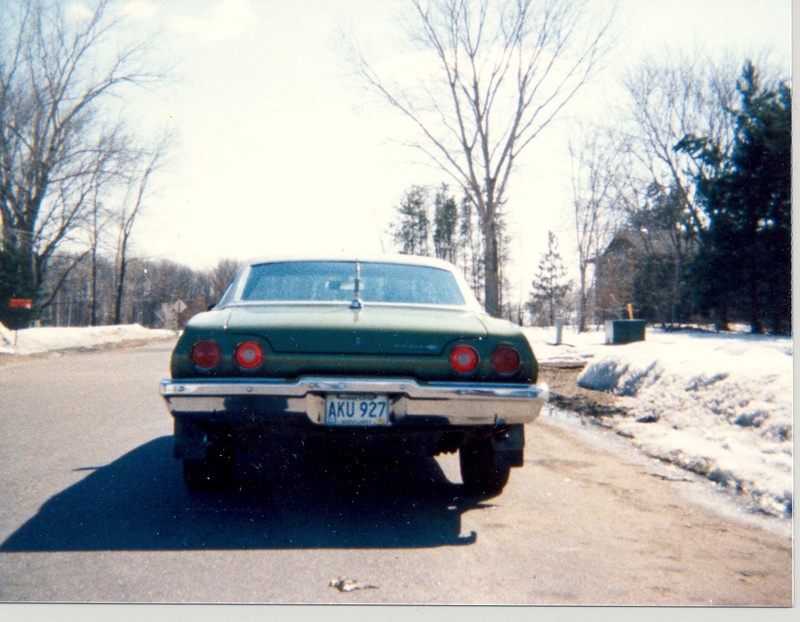 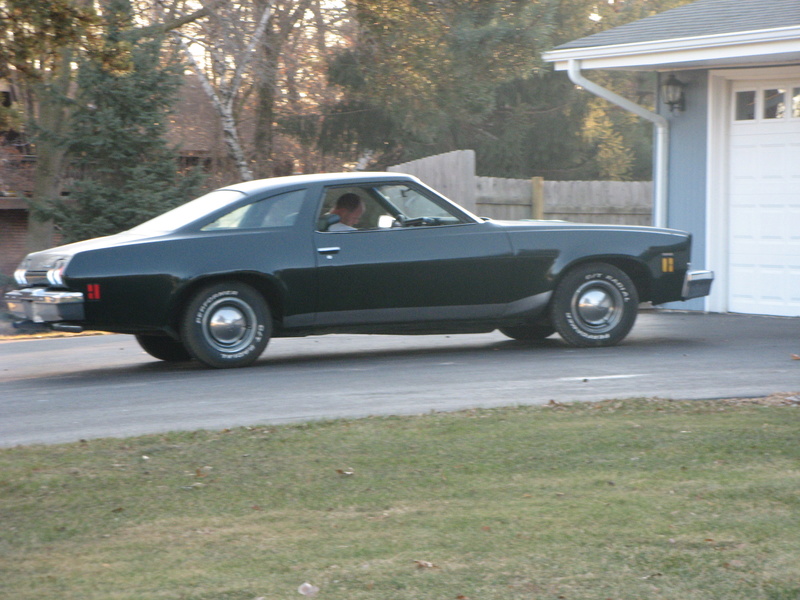 
A road trip over two days from Mn to Nashville and back to pick it up. I should have scraped it as it was so rusty. 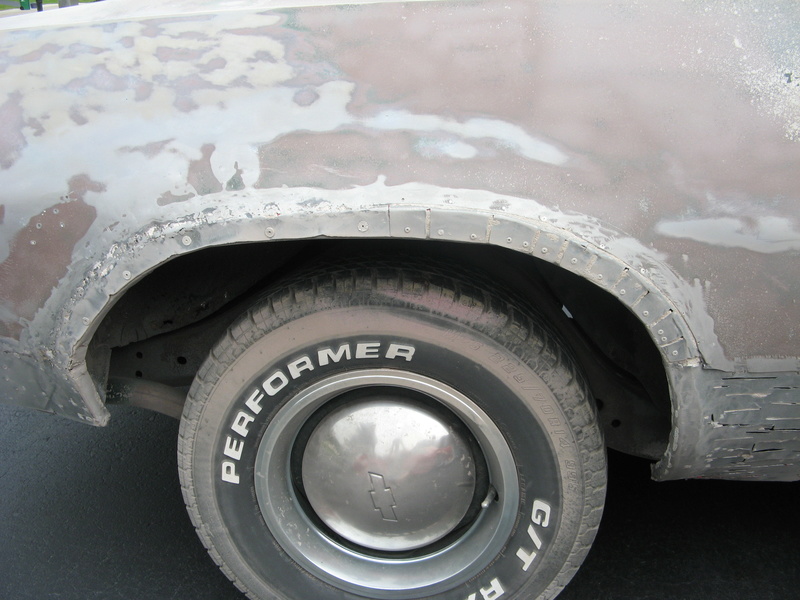 Needless to say I saved it and cut off rusty parts replaced with whats aftermarket made my own inner wheel wells from 1972 replacements by cutting and adding.

I have had 4 different engine set up in it. 4 transmissions and a 74 lemons rear end. All new now from top to bottom and sporting a LS3 connect and cruse   6.2 liter with a 4L60E trans set up now. 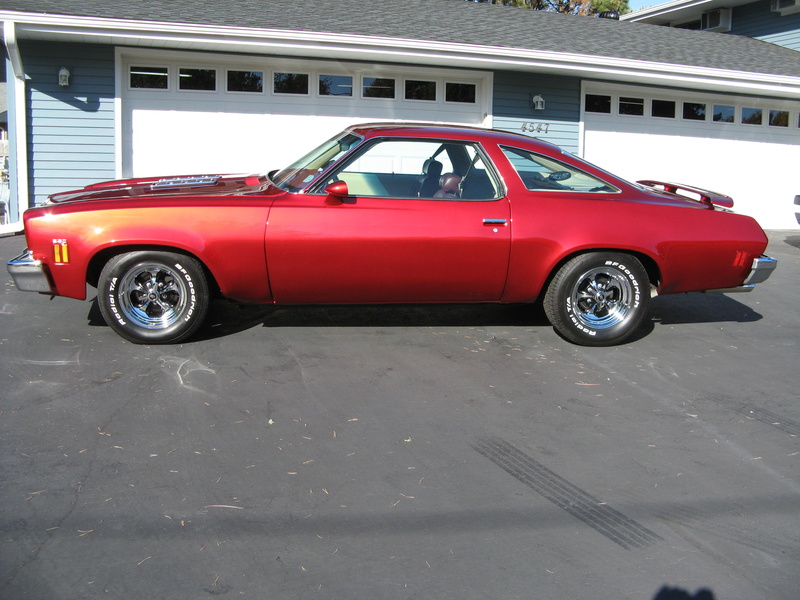 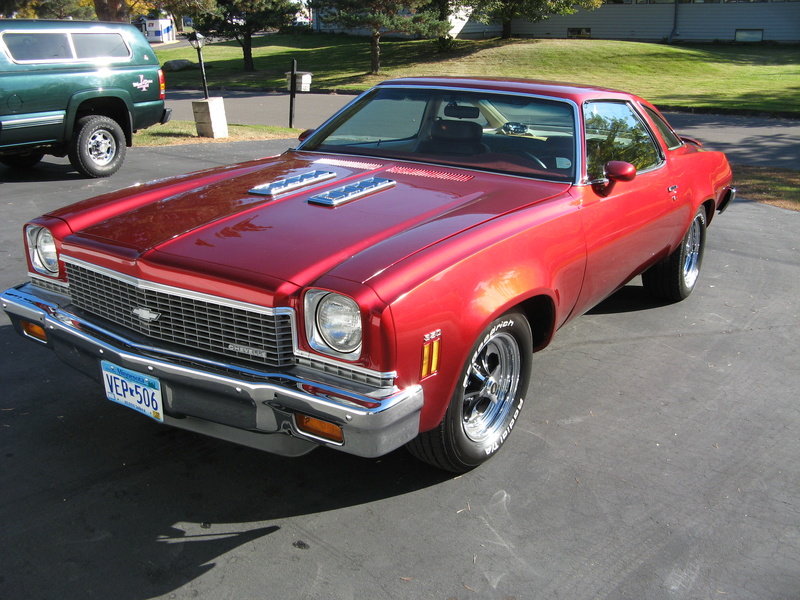 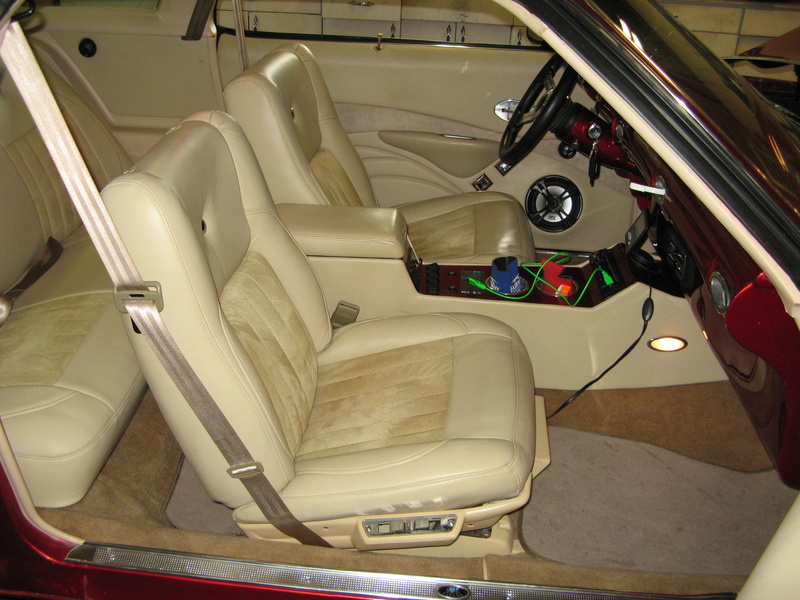 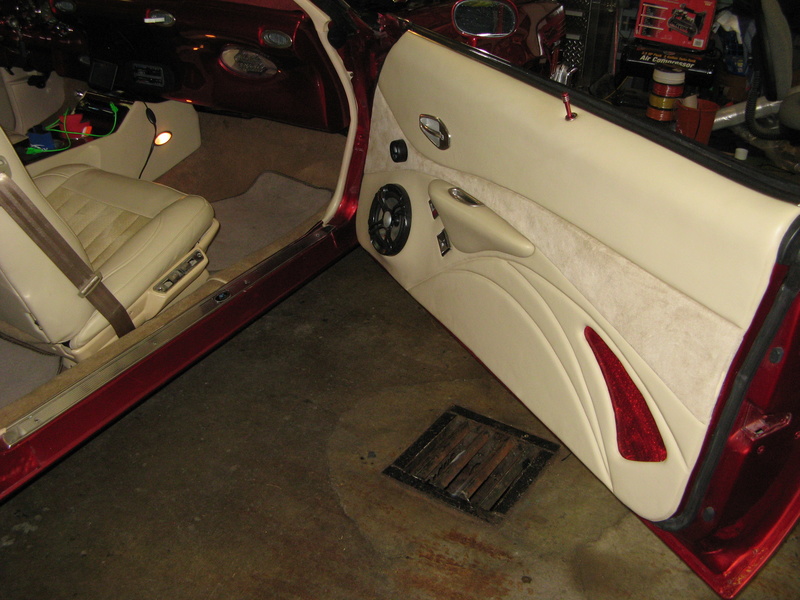 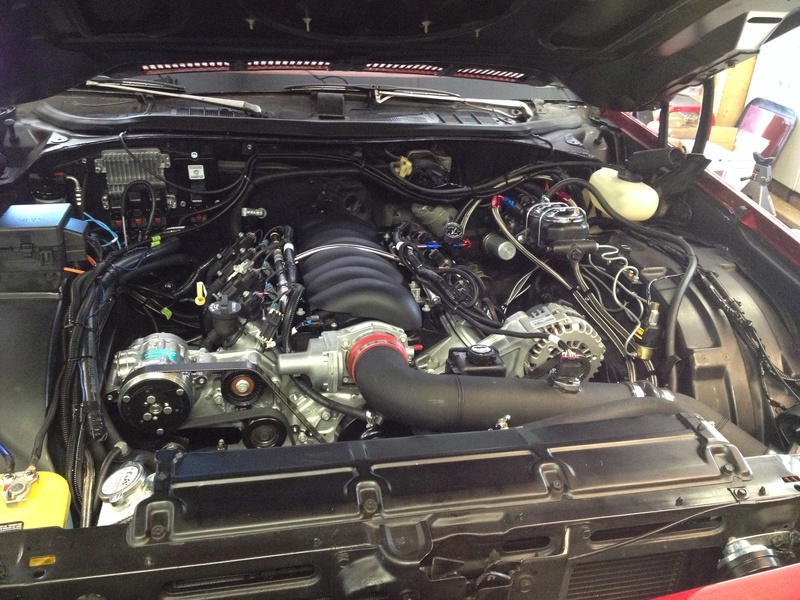 So now I have what I wanted and could not a ford at 16 years old back in high school. the only thing I did not do my self was exhaust on the car. From paint to engine set up to custom interior is all myself.

So I say just look at it and I don't think you have to ask why I drive a G3 now days. We drive it every where rain or shine.

» Chevelle SE update The Limester is Stoked Beyond Belief