I'm looking to install a sender for an oil pressure gauge in the port above the oil filter. The port by the dizzy has my warning light sender in it and I'd just as soon leave it if I can. The plug in the lower port looks like it needs a square bit. Anyone know what size that is?

The gauge is from a 76 C10, the ebay seller said, though the truck forums state that '76 would have been mechanical only? This one has no port for the mechanical hookup so it should be electric. I was trying to match the font a bit. Here is the mock-up 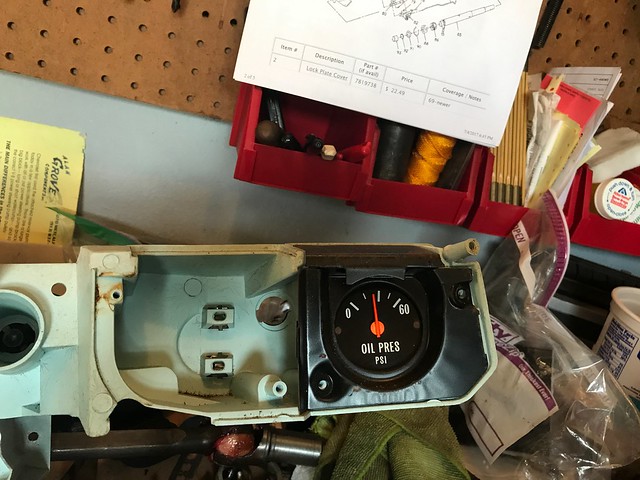 I've always run a brass pipe nipple and a tee next to the dizzy so I can run the light and a mechanical gauge.

Joe73 wrote:I've always run a brass pipe nipple and a tee next to the dizzy so I can run the light and a mechanical gauge.

It doesn't get too crowded up there? If I took the dizzy out no problem, but I'd rather not do that if I can avoid it. Mechanical gauges are more accurate I hear, but I'd rather not deal with the possibility of behind-dash hot oil leaks. the fail-safe for the gauge is the light!

I did the same thing Joe did until I also needed yet another fitting for the TPI oil pressure switch -- then using brass fittings, I put together a whole 'manifold' of sorts for all the sensors, mounted it to a block of wood, and attached the assembly to the firewall and ran a short hose back the original block port by the dizzy. It ain't pretty, but it works.

Mechanical gauges are not only a PITA (you're dead on with the oil leak thought, which is a matter of 'when', not 'if'), but they are less accurate than electrical gauges, not more.

And I only run the steel braided line for the oil. Never the white tubing.

The white plastic tubing is an invitation to disaster.. A a pipe (NPT thread) is a simple way to add another port... 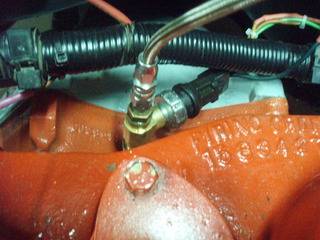 This is on a Caddy engine, bit it's basically the same area as a SBC....

And X2 on what Joe said about a braided SST hose for oil pressure...

For some reason , my picture didn't come through ! 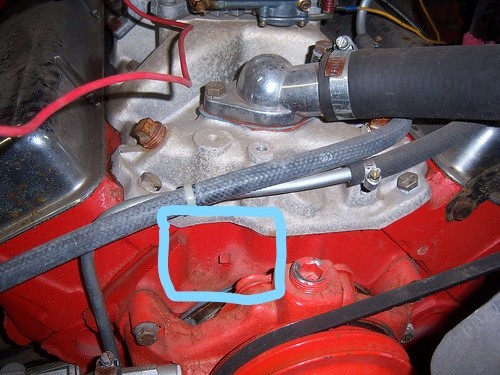 Isn't this an oil passage also?

Isn't this an oil passage also?

That is an oil pressure port, but not all blocks have that plug. At least on the small block side, only 4 bolt main blocks (with few exceptions) had that plug. That little plug is a great way to spot a good block at the junk yard. 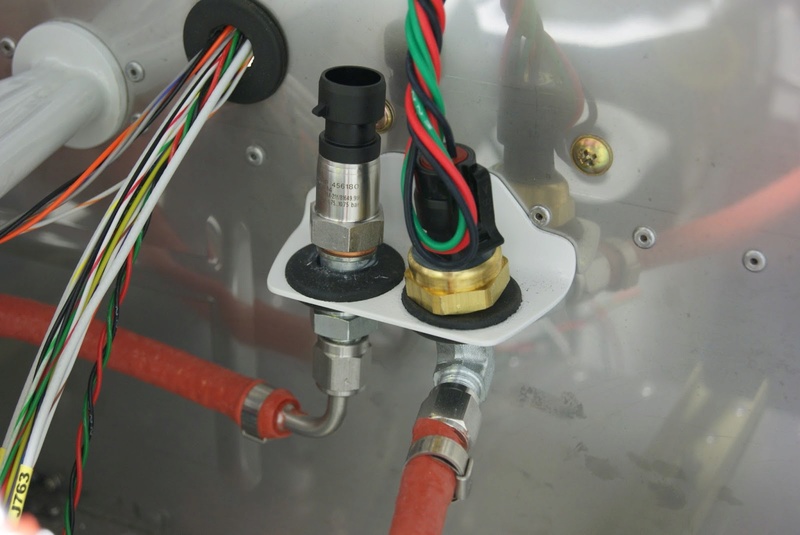 That's much prettier than mine.

So I have an oil pressure gauge set up in the cluster, still need to run some wires for it. I'm going to try Joe's suggestion of running a T fitting and putting both senders up by the dizzy. For some reason I got stainless instead of brass--will this be a problem? Also, should i use tape when I install it? I always thought to avoid tape or putty so as to keep scraps out of the engine, but the gauge sender came with tape already on it. 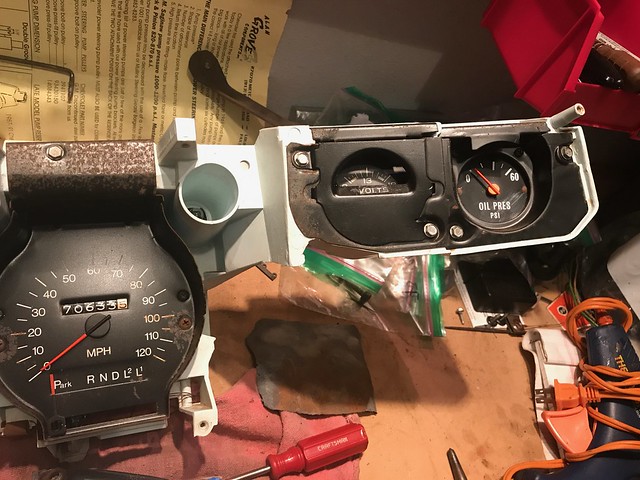 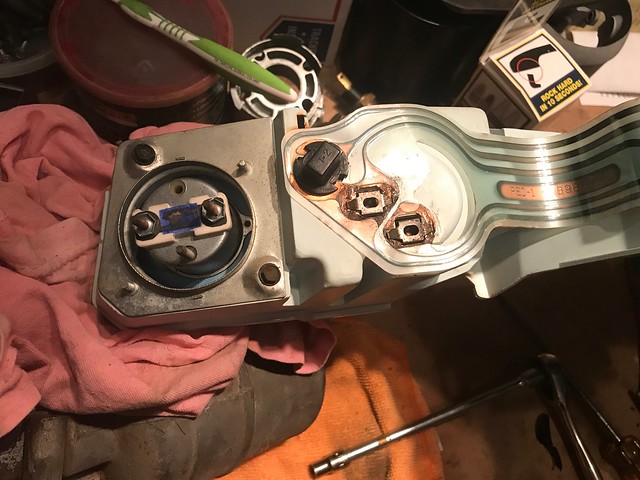 Mines brass with tape since the 80s with no problems. But I'd rather have stainless. But make sure the stainless is non magnetic or it will rust and not corrode like good stainless.

When you tape it, start the tape 1-2 threads from the end so the tape end doesn't get cut off and fall in. Second, wrap the tape so that when you finish wrapping it it fades away from the direction of tightening. This wraps the tape tighter as you tighten the fitting

I have my vdo oilsender hooked up to the oil filter port. It is not a problem and i have both idiot light and oil gauge. However i have been forced to wrap the sender in heat blanket, cause the heat from the manifold kills the sender after 500 miles if not wrapped. Other than that its no problem at all.

I didn't get the sender installed today but did make some progress by making myself a bench tester out of a model train transformer. My multimeter tells me that it is putting out 15.5 volts and variable 0-6 amps.

First I tested it on the 73 amp gauge I had sitting around.

Seemed to work, so I tested to see if my oil pressure gauge was alive.

I hunted around the interwebs and decided that the hot wire is on the right and the ground is on the bottom; the input from the sender should be on the left, but all I could do on the bench is to see if it would peg, which it did. 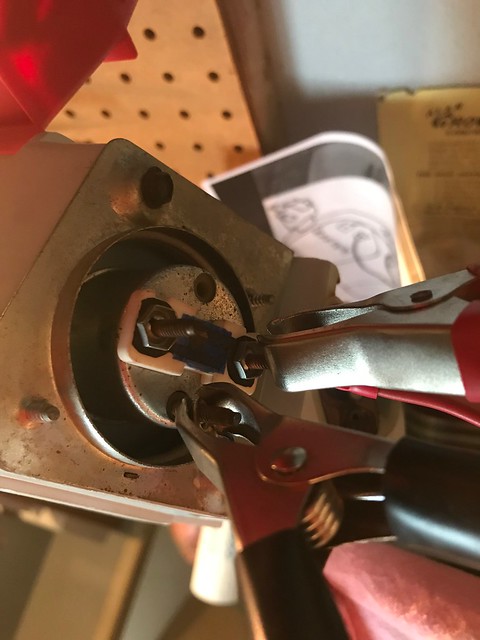 Might was well see if my tach is alive. I think the top three posts are the operative ones, left for tach signal, top for power, and right for ground. 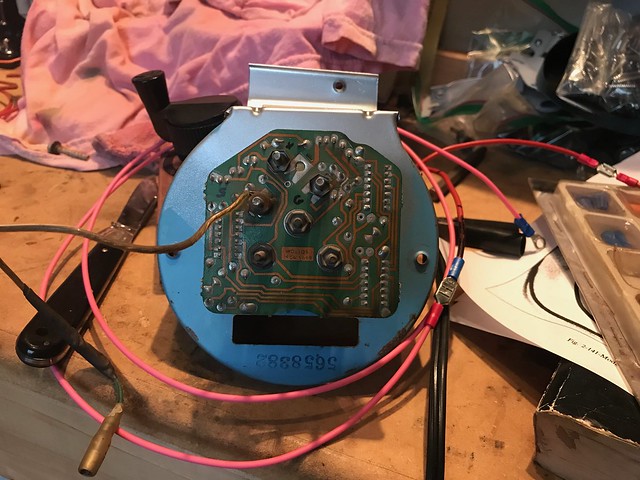 So power to the tach with no signal sends it to 4200, not to peg like I expected. And with power off, I moved the needle to zero and it migrated up to 750. I don't know if this tells me anything except that it has a life of some kind. At least I know now how to set up the test with a signal from the dizzy.

All my gauges shows different readings with key off. As soon as ignition is on the needles go to 0 exept my volt meter of course. My tach needle sits around 1200 Rpm with key off. So i guess its normal.

The VDO gauges are good stuff, in my experience. I used them in boats. I believe they are made in Holland (?) Still have a few around here I believe....

They go for Being one of the better brands, im however a little surpriced that the sender gave up after only a short time, i blame the heat so i wrapped it with hedder bandage. We will see if it holds up.

At long last, got the oil switch and sender on. I guess I can call it an oil pressure manifold. In the second pic you might be able to tell that the sender sticks out pas the back of the block, so I have to remember to remove it if I take the transmission off or do anything that will cause the block to lean back. Now I need to make the sender wire. No one seems to sell the little hooded connectors like the stock one on the switch. I guess I will figure something out. 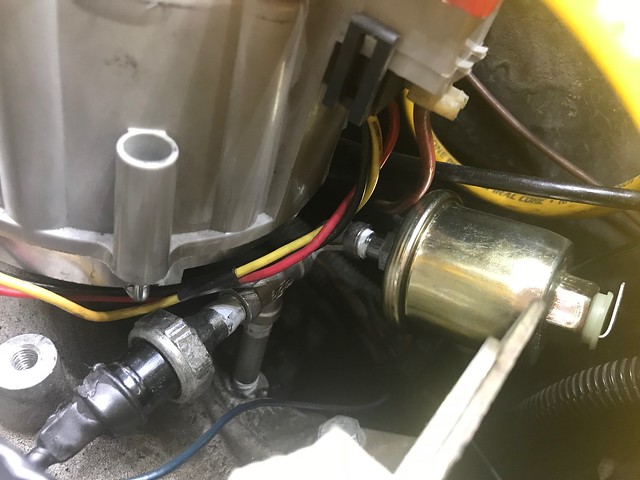 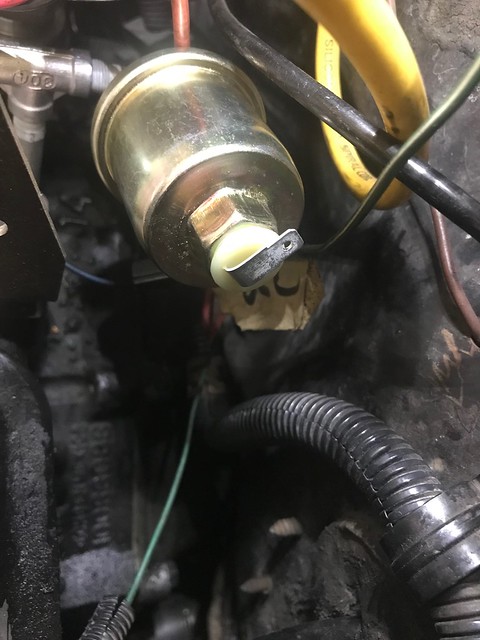 Looking good Clai! Where did you get the fittings? Here is a link for the pigtail connector I think you're looking for.

Thanks Joe and Bill, you guys are good. I searched up and down on "Chevy/GM oil pressure switch/sender connector" and did not find it. I need to sharpen my skills.

I got the fittings at a local hardware store. I went really just seeking information and the guy who helped me turned out to be a camaro guy. He knew exactly what I was doing, hooked me up with the non-magnetic stainless and also the alternate thread tape for stainless. He said the same thing you guys did about wrapping it a couple threads down to preserve the ground connection. It will be a while before I start it up to look for leaks, but it's done for now.

I had the same issue with waiting both idiot light and gauge. I put my gauge sender in the oil port right next to the oil filter. It works fine, and i did not have the trouble with space around the dizzy. I did however need to wrap the gauge sender in heat shield as it is close to the exhaust, and i made the first sender die in a short time. With the heat shield it works just fine now.