As many of you now know, my son works for Hagerty and is on the team that produces their quarterly Valuation Tool. My son proudly pointed out to me yesterday that it now includes 1973-1977 Chevelles! They had some information in the past for the Oldsmobile Cutlass line, and now have some of the Pontiacs.

About 25 years ago I purchased a 1973 Cutlass Supreme for my son and myself to work on (father son project). Unfortunately Michigan took it's tool on our project car and parts that are 1973 specific were not in production, it ended up going to scrap about 10 years ago. I have always had a collection of "Square Body" trucks in the range of "Parts Truck", nicely restored, to very good shape survivor. When my son moved from answering phones at Hagerty to working on a temporary basis on the "Price Guide" he pushed the Oldsmobile line and some of the Cutlass' started showing up for the G3 years. When he moved over on a permanent basis, he presented the idea to the upper management on valuing Trucks because at that time no trucks were present in their guide, but he would do research for me on what I should pay or sell one for. Then came the Grand Prix - I purchased a 1969 GP 5 years ago and Hagerty's information on them stopped at 1968! It became personal for him when he purchased the GP from me - I let him use if in his wedding and basically lost it then! I bought my 1975 Laguna when I sold him the GP, again he had to do research on what mine was worth when I purchased it and now he has used that same for the Chevelle line in the G3 years!

Again - this is my brag as a proud father!

Maybe someone here can answer this, but there has always been confusion on the 454 and the 1975 Model Year.

I get asked a very similar question a-lot because I have a 1974 Chevelle with 'LAST454' on the license plate.

1974 was the last year for the 454 in a Chevrolet passenger car in CALIFORNIA.  Other than the People's Republic, the last year was 1975.  The 454 is difficult to find but not impossible in two 1975 models; the Corvette and El Camino.

Never say never, but if there is a 1975 Malibu or Laguna with an X or Y code 454 in the 5 digit of the VIN, everyone will want to see it.  If they exist, there has to be only a handful of cars.

And I say X or Y because the internet is all copied information, and some times the copied information is incorrect.  Many VIN decoders list X and Y but if referring to a 1975 GM shop manual, it will only list one choice for the 454.

Sorry something else, I thought the 1975 Laguna was a half year car produced in the later half of 1975, missing the early production window of the big block?

According to this release on the 1975 S-3, it was a mid-year intro and the 400 was listed as the only optional engine.  However, all the Chevrolet documents from late 1974 show that the LS4 454 was still optional on the Chevelle line.  So my guess is that it was not available on the S-3 since the 454 was not available for the last half of the model year.

Also good work on updating the Hagerty valuation tool. It's not very accurate for some less main stream vehicle prices. 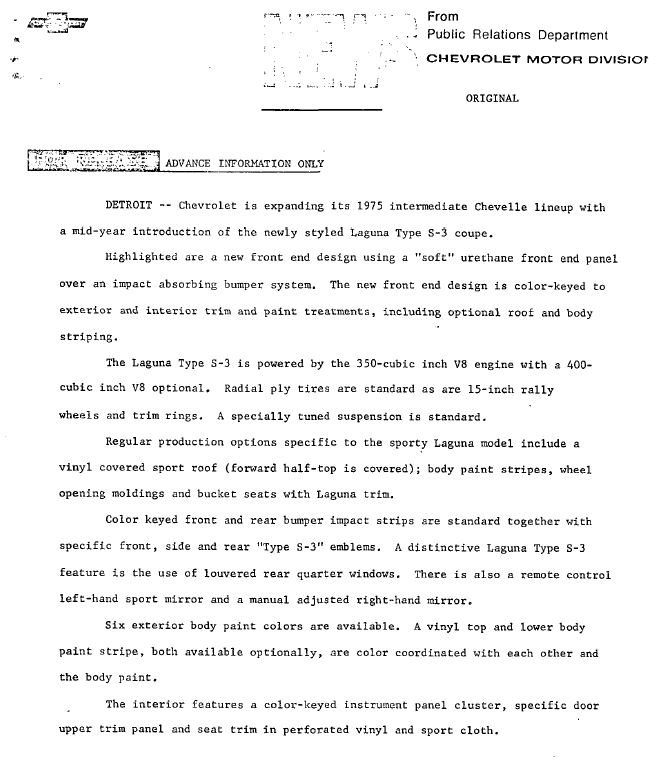 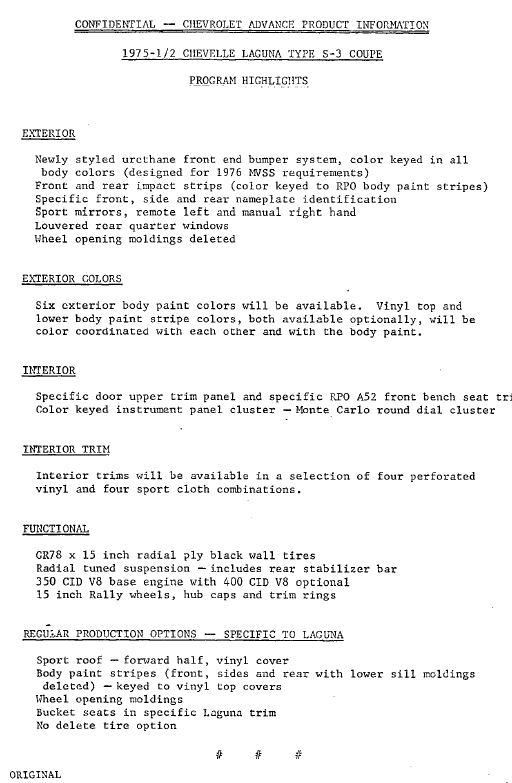 The 454 topic for 1975 has always been interesting to me. I've been searching for a 454 Laguna for 20+years and still have not found one. The dealer info sheet for the 75 Laguna states specifically that the top engine that was available for the Laguna was the 400 as stated in the post above. I also remember reading that they dropped the availability of the 454 in January due to meeting new guidelines set by the EPA. My 75 is a 400 optioned car and it was built in February of 75. I have, however, found a listing for 1975 Malibu with a supposed original 454 about 10 years back. I'll see if I can find that listing in my archives. I'm also fortunate enough to have a 1975 El Camino SS with the original 454 intact. The VIN does include the "Y" code and it was built in November of 1974 in Arlington Texas. Shaunaconda here on the forum also has a very nice example of these rare El Caminos. One of the articles written about production numbers for 1975 states that "approximately" 10% of the Chevy A Bodies produced in the 1975 model year up to January 1975 came with the 454. So I'm sure that number is rather small given the energy crisis and EPA regulations of the day.

Tom, great to see we have an advocate at Hagerty by way of your son! Hopefully this exposure with the Valuation Tool will get our vehicles the attention they deserve. I also support Hagerty by having my classics insured by them. They are a great company to work with. I recommend anyone looking for insurance for their classic vehicles to contact them and give them the opportunity.

Sorry, but there is no way 10% were big blocks in 1975. GM was banging out 100 of thousands of cars, and even if was only for a few months with the chance for the big block, then where are they?

I have been chasing these cars for decades. I have never seen a 1975 Malibu Y code 454.

Corvette or El Camino, sure agreed, both got the 454.

What about something other than a D37 Malibu?
Maybe Monte Carlo or a Police version of the D27 Malibu 4-door sedan?

It would be nice to have a member come forward and confirm any of these models.

Thanks for the info. Hopefully we can find some cars.

I agree Jerry. Seems that 10% is not realistic considering that everyone back in 75 was looking for fuel efficient cars. I wish GM would have kept better records during this era regarding options on these cars. I did finally find the post I saw on the Chevelle Tech forum back in 2008. Can't verify the car is a "Y" code  or not but it certainly caught my attention. And also below is a 75 Monte Carlo with a 454. So they are out there but very hard to find. Took me 15 years to find my 75 El Camino SS with numbers matching 454/400 drive-train. 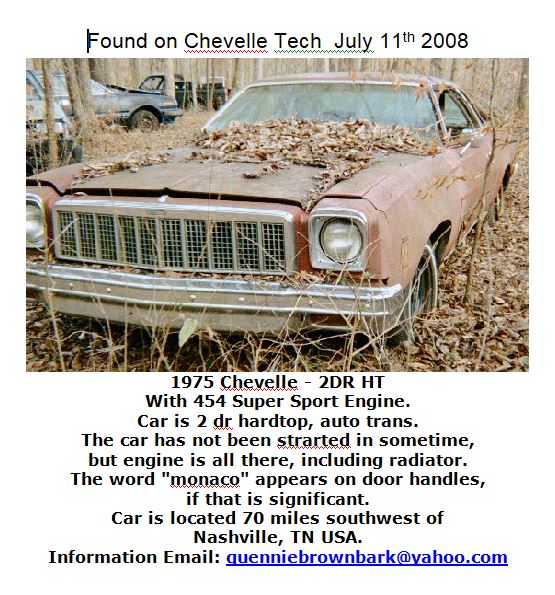 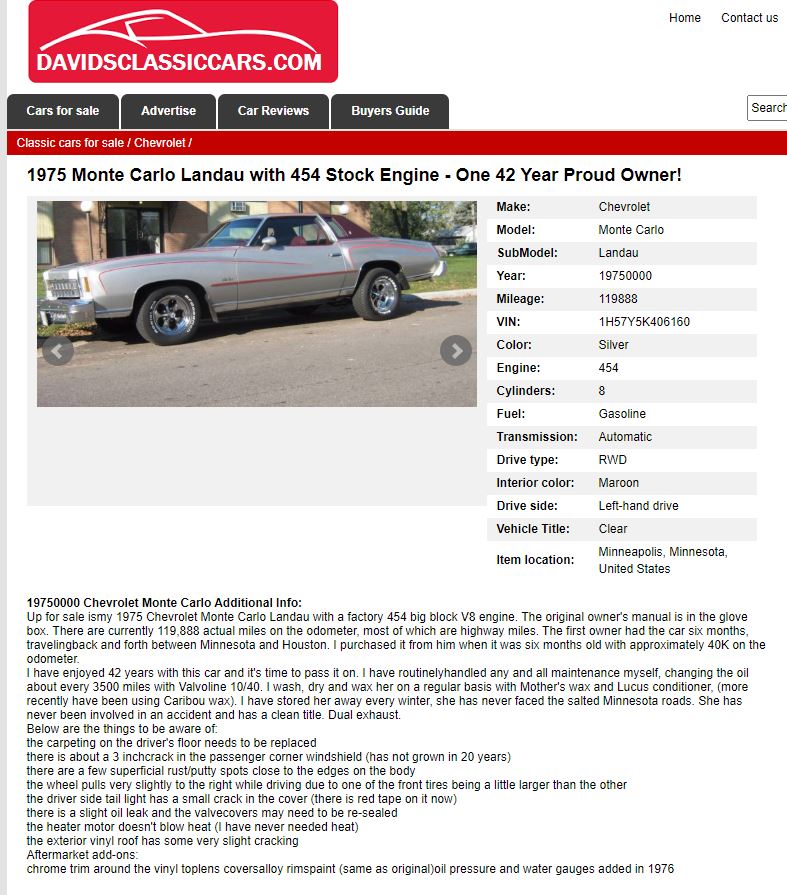 This is similar to the discussion of Laguna front end on an El Camino.  It's not OEM without a build sheet.  Dealer installed doesn't count.  Long story short, El Camino forum, some guy posts what looks like a build sheet where there is some COPO verbage typed on the bottom of the sheet.  The font didn't match the rest of the build sheet and didn't follow any other typical customer requests for assembly.  So probably faked.  Not sure one was ever truely documented.  Anyone can hang parts on a car and call it production but only a build sheet backs it up.

I guess we could make a list of these oddities.


At least with engine options, there is no argument since it's in the VIN.

It's really frustrating that GM didn't keep the detailed production numbers on our vehicles. All these numbers are at best, calculated guesses. Here's a post from 2008 that discusses 454 optioned cars in 1975. Still more questions than answers.