Pretty sure there is no vacuum leaks. Basically vacuum tested all parts. Distributor is new because the advance on the original was bad so I bought a brand new one. Msd brand I believe. Also sprayed all around the engine with carb clean and no raise in idle. Vacuum at idle was around 14, as low as 12 in gear when I had it running better at 600 rpm. Thinking timing is my issue still. After 2500 the timing light pulses slower and can't see the timing mark so maybe it's too advanced. I might have been going the wrong way. Gonna try tomorrow some more. And in relation to timing would headers have much affect over stock manifolds, like more or less needed.

The vacuum reading seems pretty low. Are you running a performance cam? I've got an Edelbrock performer cam in my 87 El Camino and it runs at 17 inches of vacuum. A bone stock cam should be at least 18 inches of vacuum. So it sounds like the timing is off or your valves are adjusted too tight.

g3chevy / Mr Pontiac wrote:My first suspect would be the reman carb. Most are not rebuilt correctly and have excessive play in the throttle shafts which causes a vacuum leak. Also to much torque on the carb mounting bolts will warp the carb creating issues as well.

So true. I've rebuilt several Q-j's for my two cars myself. The first one (back in the early 1980's) turned out a bit crappy. After learning from my mistakes, I got better and the last few were flawless. In agreement with g3chevy / Mr Pontiac, warped QJs can be problematic. Lots of places address that by machining the respective surfaces flat. Sounds good on paper but that process removes the gasket sealing ridge. There is a better way to address that. Years ago, Dennis Baker developed a "un-warping" tool which he used to sell. I got one and it works great. As for the play in the throttle shafts, any shop worth their weight in salt will machine out the throttle body shaft guide holes and install bronze bushings as well as straighten the throttle shafts.

Last year, I was rather preoccupied getting my new engine built and the car ready to receive it so, against my better judgment (as you'll see), I opted to have a "professional" shop based in Boerne, TX, that specializes in Quadrajet carbs custom build and tune a carburetor for my engine.

From the get go, I could not get it to idle correctly. After accumulating about 12-hours of engine running time, I readjusted the rocker arms. I hooked up a remote starter switch in order to turn the engine (without starting it) as part of the rocker adjustment process. I began on the driver's side. Three rockers into this process, I smelled gasoline. Considering I am working inside my garage with the air cleaner removed from the carburetor, I didn't think much of it until I witnessed a drop of liquid fall from the outside of the carb onto the intake manifold. It was gasoline seeping out between the air horn and main body, the part of that gasket which is exposed outside the carb was completely soaked with fuel.

Seeing how there's fuel leaking from between the carb body and air horn even though the carb was not touched and the stock style mechanical fuel pump was operating only at cranking speed, I could only conclude that the carburetor was flooding due to a bad needle/seat, mis-adjusted float, or bad float. I had been banging my head against the wall for weeks trying to figure out why my engine was manifesting flooding symptoms, never taking into account the possibility of a professionally built custom carburetor being defective. I immediately swapped it out for a QJ I built.

Considering what I paid for this carburetor, to say that I was disappointed would be an understatement. I expect shoddy work from today's repair shops where they hire inept air-heads who can't wipe off poop after using a toilet unless they're plugged into a computer that told them where to find their own butt.

I was so utterly disillusioned by that whole experience that I would have preferred to simply return this carb for a full refund and be done. However, being that I am a realist, I was aware that "All sales are final. No refunds for carburetor purchase...". Furthermore, despite its being in operation for only two-months (September to mid-November 2020), unfortunately, I did not discover this issue until seven-months after receiving the carb which put it just over one month outside the time frame for return for service: "Contact QP within 6 months of original purchase if your QP built carburetor has issues that cannot be tuned out with enclosed tuning guide". This is the area where the builder would have earned one star. They offered to examine/inspect/repair the carb, catch is I had to pay for shipping the defective carb back to the shop. They never told me what was causing the problem, only that: "It was disassembled. Changed the needle/seat. Set float changed the air horn gasket and assembled. Tested and needle/seat holds pressure. Also changed the fuel filter."

I got the carb back on 12/10/2020. Since I was running a QJ I built, I had no occasion to open the package and inspect it until 01/30/2021. Upon simple checking of operation (throttle valves and choke valve open/close) the choke valve was jammed. In, what I can only surmise as a bonehead rookie mistake, one of the linkage rods was not installed correctly (see before photo) which caused the choke mechanism to bind. 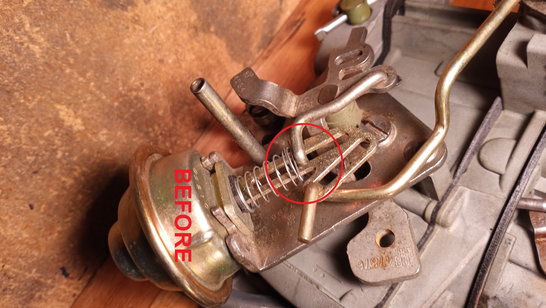 Albeit was a three-minute fix (see after photo), it should not have been necessary to fix the fixed carb in the first place. 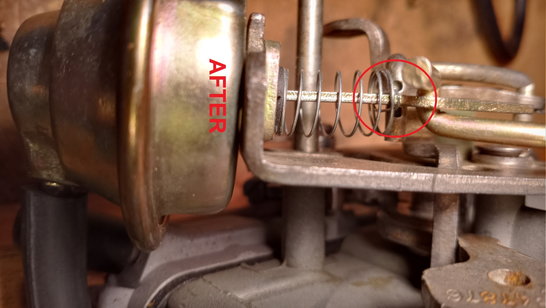 How many inspections/hands did this carb pass through before sending it back to the customer? None of them noticed the choke valve was jammed? Where's the pride in workmanship? What's their standard for quality control? I now wonder what else is wrong with this professionally built and repaired carb? Just for giggles, I installed and ran it. It runs nicely at wide-open-throttle. The idle, however, is erratic no matter how much I adjust it. I rebuilt the carb I had on the engine before the engine rebuild; shockingly, it worked perfectly. Swapped it for one of the other carbs I built; runs smooth. Tried yet another carb I built, runs smooth. I suspect there must be something wrong with the idle circuit in the "professional" custom built carb. Im now stuck with a $500.00 paperweight. At some point, I'll tear into it and fix it correctly.

I posted a detailed review about this on both the builder's own website and their Facebook page; both were deleted. That explains why they only have glowing reviews, they delete the ones they disagree with.

As I looked more into this company, I found two complaints filed against them with the Better Business Bureau in the last three-years (https://www.bbb.org/us/tx/boerne/pro...825-1000146148), by the way, theyre not BBB accredited. I wish I would have learned about this sooner.

I am beyond disillusioned, disappointed, and dissatisfied, I am downright disgusted. The money I spent represents an immediate pain in the wallet, but the time I wasted because of this is time Ill never get back; time I could have spent with my family was, instead, spent in the garage.

My experience of being sent a defective "professionally built" carburetor twice may be an isolated anomaly but its a cautionary tale nevertheless.

The message being communicated is don't discount the possibility that your rebuilt carb is defective.

Great info, thanks for sharing!

Thanks for that. I'll keep that as a possibility.. I have been assuming that it was good. Being a did run better than my other one. My original carb was always flooding it out. And I found out that it would not hold the gas in the bowl it was leaking out somewhere, but the new carb seem to run a lot better so I did not question it. But I have been wondering what the float level was. Seems like it floods really easily. Also, I totally forgot that there is a vacuum line to trans. Although I did have it rebuilt I have just been assuming that one was good so I'm going to check that for vacuum leak. So thank you all for the avenues to check.

I had a q-jet rebuilt by Cliff Ruggles of Cliff's High Performance - zero complaints, worked like it is supposed to. I sent that carb because it needed some machining I was not able to do. Otherwise, I purchase my rebuild kits from Cliff's High Performance as everything they sell is compatible with alcohol in the fuel, you can even jet a q-jet for e-85 using Cliff's kits. 91 Octane "Rec Fuel" is $4.50 a gallon while 87 Octane with 10% alcohol is $3.00 a gallon - my 7.3:1 454 Camper Special drinks a lot of fuel, 87 Octane is much easier on the wallet on 91 is not necessary and I do like to run my q-jets!

Iggy thank you for sharing where to get those types of kits. In this day and age, we have to except the fact that our gar is going to have some alcohol in it. My stock 75 8-8.5-1 350 will damn near run on water. lol I'll have to check out the website. I love my q-jets too.

» PONTIAC CAN AM guys gals