Well, I guess I will get started on a build thread for my car. It is right now in mechanically stock condition complete with the original catalytic convertor. It has had a repaint/restoration in 1994 by a previous owner where they changed the car's visuals completely. It was originally a blue/white stripe exterior with a blue/white interior. Now it is a 1994 Cadillac red or maroon, and had a gray interior that I started changing over to black, and have yet to finish it.

Part of the reason for stopping was indecision on my part, because everything mechanical needs attention. It still starts and drives fine, but all bushings are worn out, stuff leaks, and the engine smokes a little (likely valve stem seals, because it does clear up after a week or so of daily driving). The power must be increased, because 400 ci should be quicker than this thing is. That and lack of money for budgeting out the rest of the build.

But I knew I would not sell this car unless I got into a severe situation, and now I am able to budget for finishing this thing.

Here is one of the early pics of the car 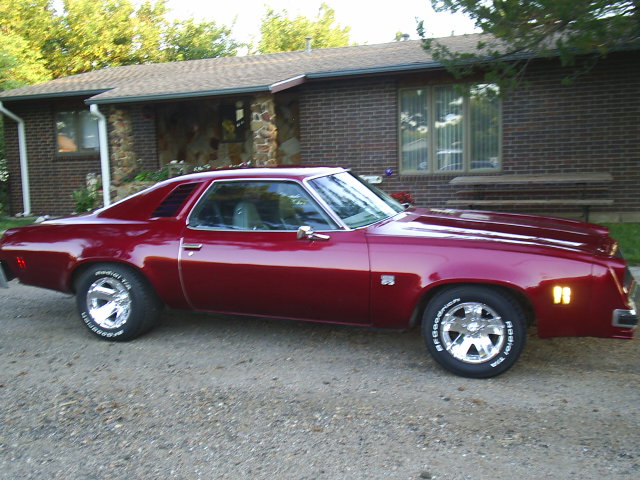 I have recently bought new rims for it, because the offset for the rear wheels put the tire into the outer wheelwell on compression. Had to keep air in the shocks to keep the tire from getting cut.

So I got these, with shocks aired up and without air 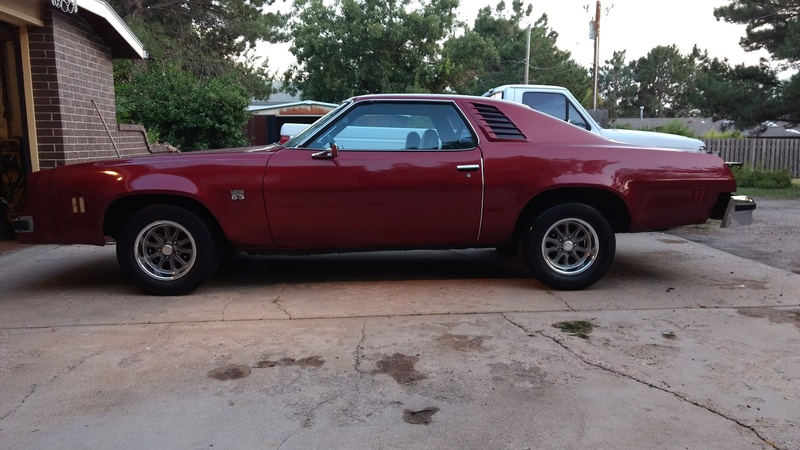 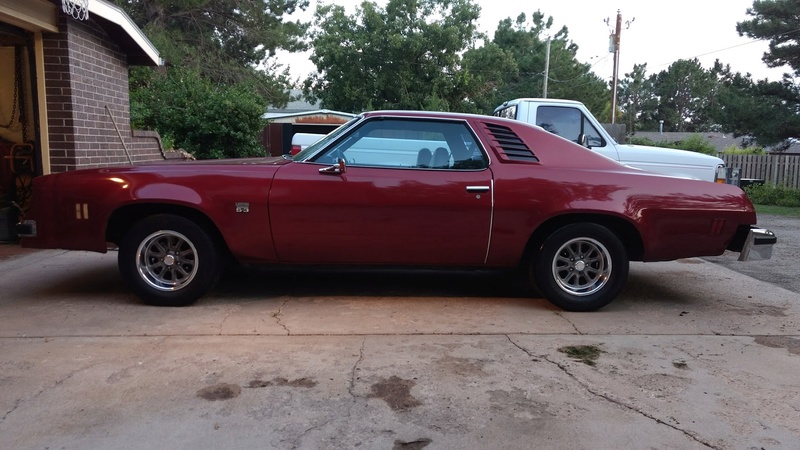 These rims aren't as wide in the back so it can clear the wheelwell and I can use normal shocks for a normal car ride quality. As for the engine, I had a 383 that I had under the counter freshened up. It is still old school with early smog heads and a 280 magnum cam. I am considering having a set of vortec heads built for it, but I think I will run these for a while. 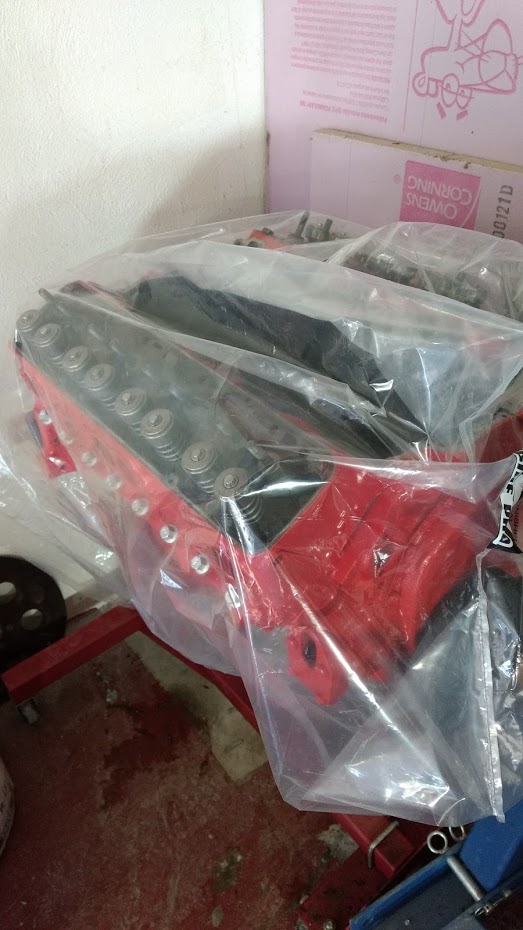 That is where I am for the moment, and I plan on getting the suspension fixed before anything else. Try to keep this in the "rolling restoration" phase.

Looks like a good candidate for your plans ! Either engine you have should work good for ya !

Well, I started into the front suspension. Just to re-iterate how factory this car is, when was the last time you saw a stamped nut on top of the real nut for the top of the shock absorber. 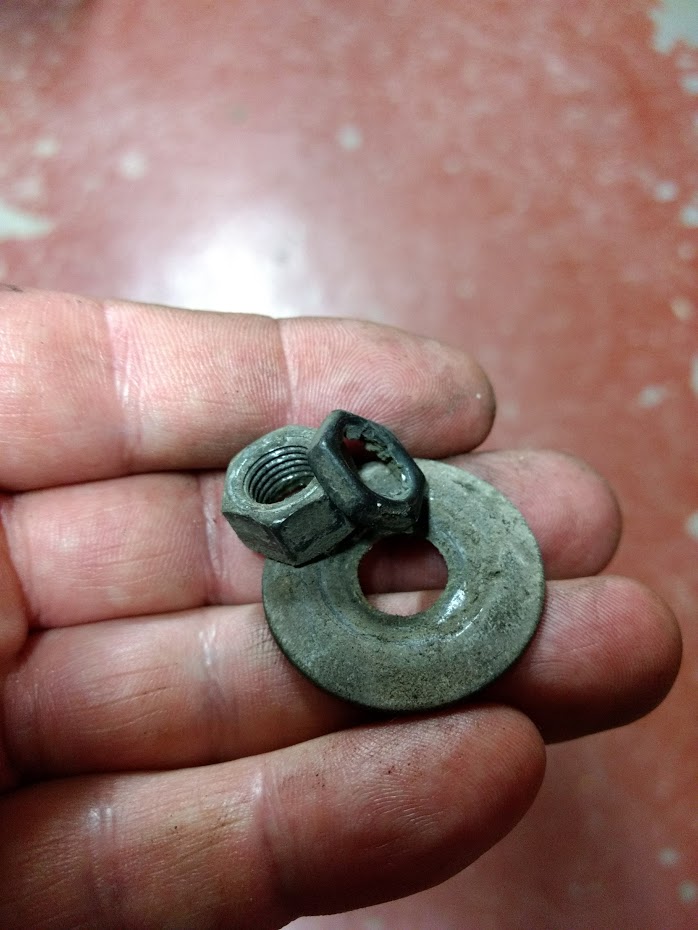 Beyond that, how about these dampers? 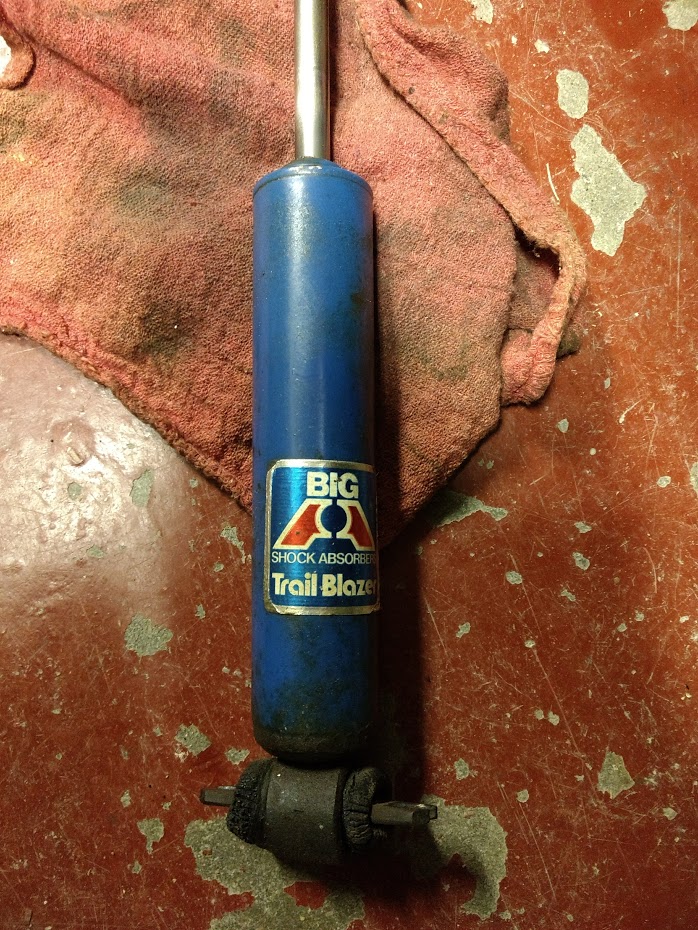 I really don't know if those are the factory shocks, but these are the numbers on them for posterity reasons. 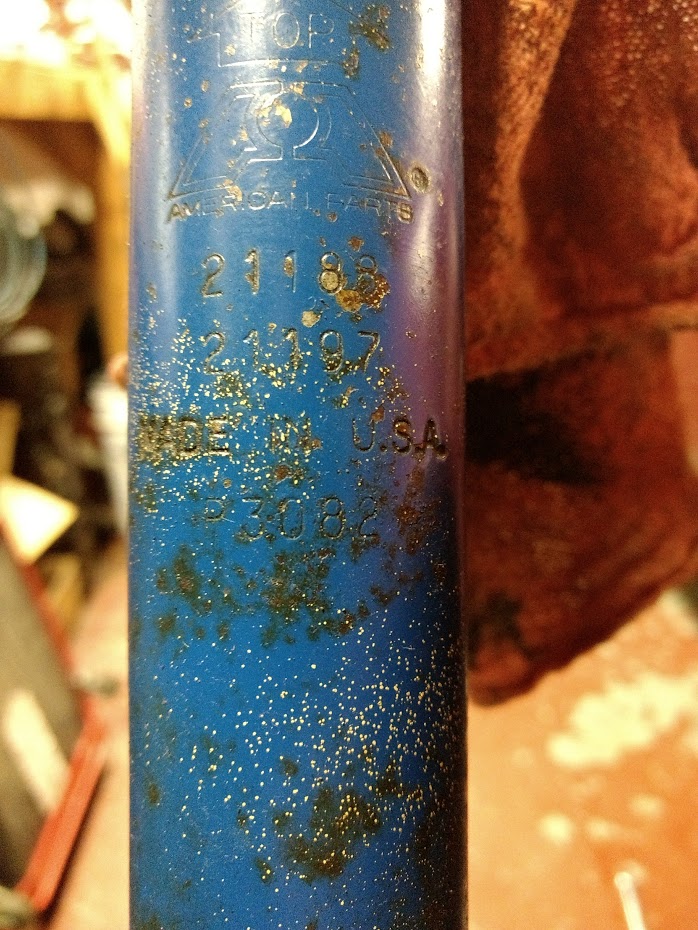 Hey. I love your car. I have had several 400 small blocks. I still have one in my 1986 C10. I have studied these engine combos and I know what they seem to like. The one in my C10 has 10:1 compression, custom ground solid flat tappet cam, AFR 195 Eliminator heads, Air Gap intake, and 770 Holley Street Avenger carb. Based on the one I had in my 1970 Camaro, it should make 420 or so rear wheel torque. Feels good. Your car will also like some 3.42 gears.

Thanks. The 383 I am putting in is pretty much a stopgap solution right now. I do plan on upgrading the 400 later on. Either that or just go big block. Kinda depends on what my wife wants to end up with also, but I doubt she would reject a rat.

Well, I finally got some stuff done on the Laguna. Replaced the bushings in the front end and getting ready to do an alignment. I cut 1/2 coil from each spring in an attempt to bring the front down a bit.

In the past, when I would air down the rear shocks, the car would have a lean to it, and it still does. The driver side sits higher than the passenger side. I have a suspicion in mind about the driver front having an isolator that the passenger side doesn't have, but I will check that out after doing the rear suspension if putting new springs in the back doesn't help.

This car will get done, just life got in the way for a bit.

Figured I would share some pics of the front a-arm bushings. They we're really bad. 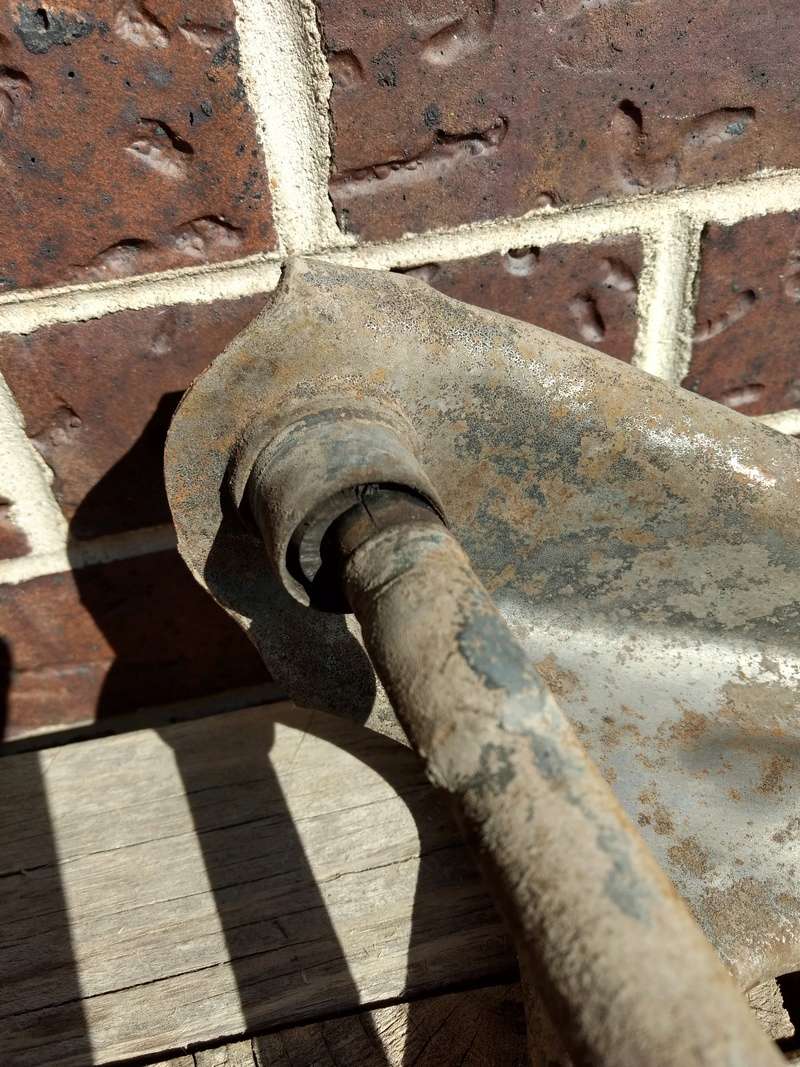 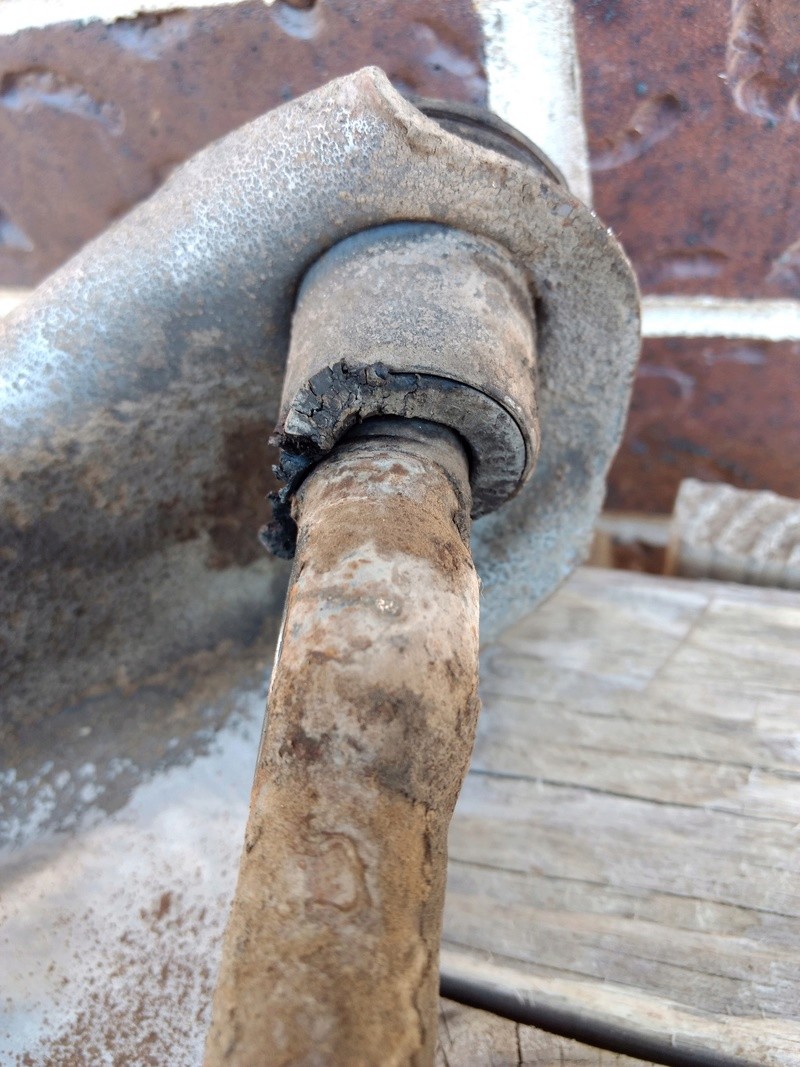 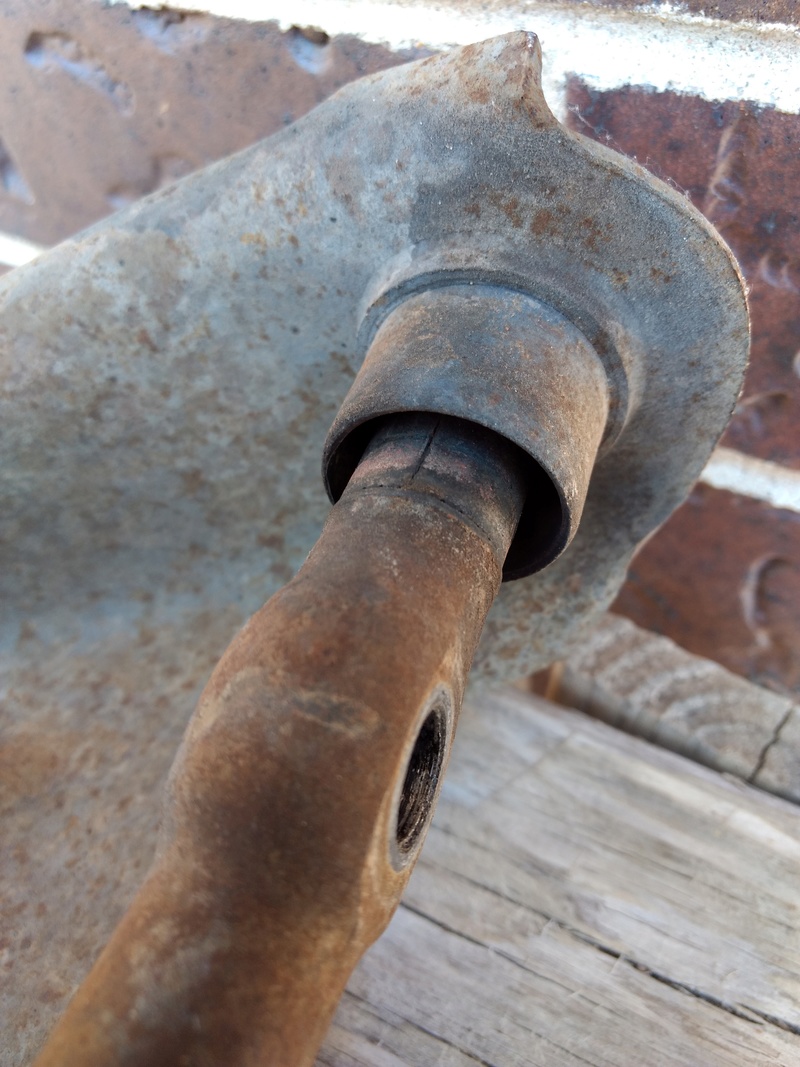 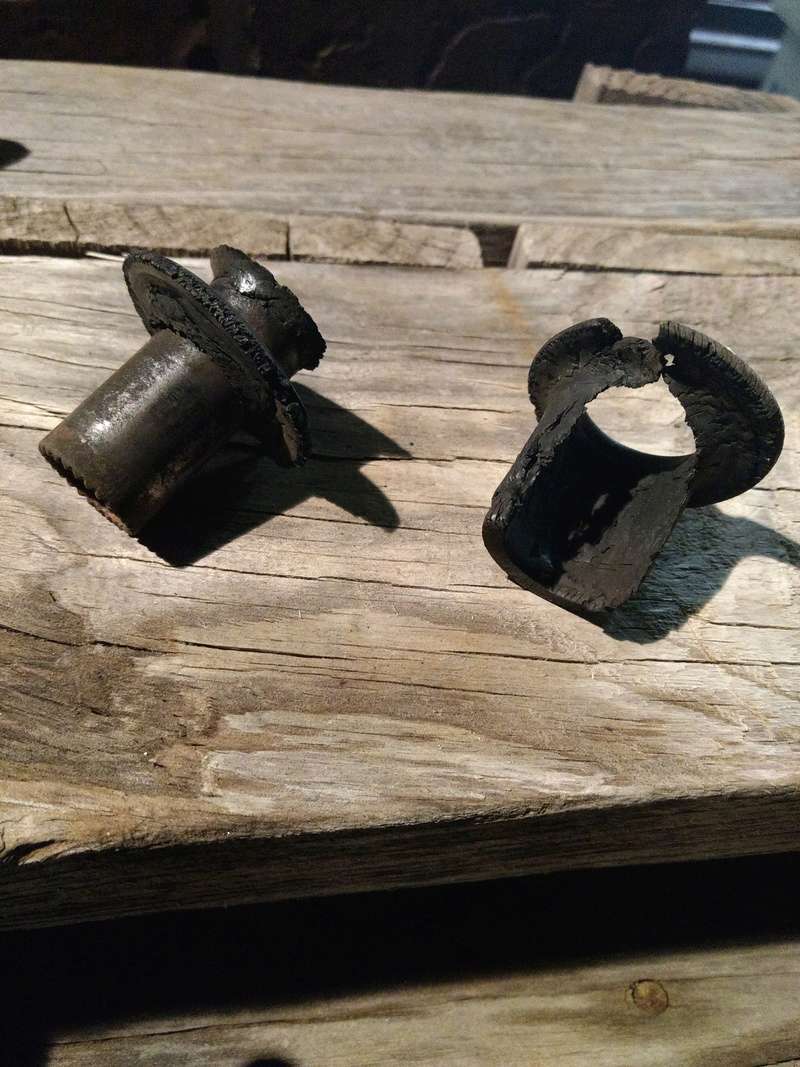 I didn't get pictures of the new bushings, but everything is looking good with fresh paint. I just got the stuff for the rear suspension ordered, and will be working on that soon.

Wow, those were even worse than mine, and mine sounded like someone hit the frame with a hammer every time you hit a bump.

Actually, the car was quiet and drove straight. The noise definitely happened when going low-rider style through a dip or driveway. Clunk-clunk!

Good work. I need to do all of my bushings. I took the front fenders off so I can get the frame out so I can see now how bad they are. Dry, cracked, and busted. Kind of like me.

Check out my white rear end! 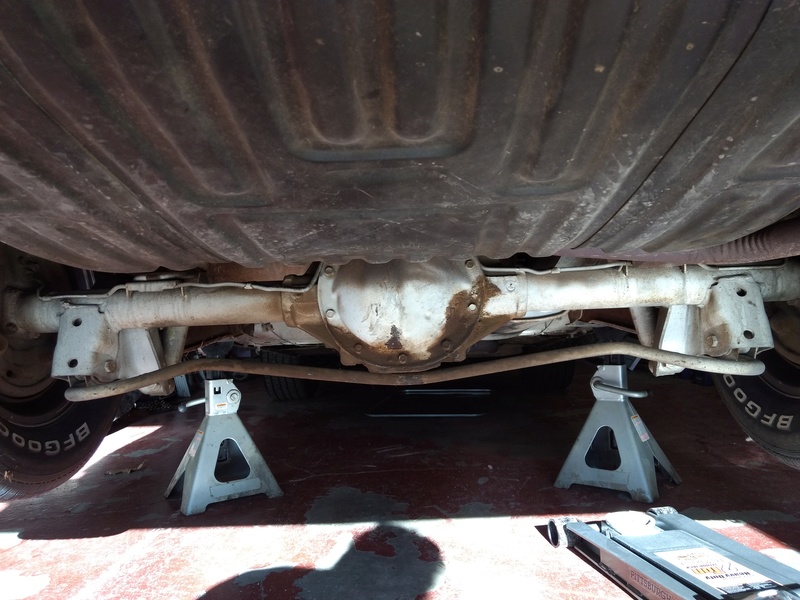 Back in 1980 my best friend in high school painted his rear-end white in his 69 Lemans, I couldn't be outdone so on my 73 Chevelle SS I painted my rear end orange with contrasting silver sway bar. Everyone thought it was tits then, not so much, if I did it now. LOL!

Today I took out the front springs so I can try to figure out what is causing the lean my car has. Both springs are the same height, and bot sides had rubber isolators that looked to be in good condition with similar thicknesses.

So I decided to do a quick measurement of the frame. The car is supported at equal points and equal height behind the front tire, but the area at the spring pocket is closer to the ground on the driver side than the passenger side. The point where the sway bar attaches is lower by the same amount. I don't see any evidence of an accident. I do believe, however, that production tolerances could be the culprit here.

I just did a quick tape measure method, but I am certain that more accurate measuring will show the same thing. I estimate the difference at the spring pocket to be about 1/2", which would explain the almost 1" difference at the wheel opening.

Did it always have a lean to it?

Yes it did. I noticed it the first time I let the air pressure out of the shocks. I always thought it was just uneven settling of the springs.

I need to do a bit more measuring, but if the lower a-arm attachment point are even, I am considering using a spacer at the top of the passenger side spring then trimming the springs for height.

Now I'm not sure if there is as drastic of a difference side to side as I thought. Looked up in the spring pocket closer, and noticed there is a depression where the halves of the frame rail meet. I probably stuck my thumb in there and made my plumb bob measure out a whole inch difference. There is still a difference, though more like a half inch or less.

This pic shows the difference between the center of the front bushing bolts. The pockets themselves are about the same difference. 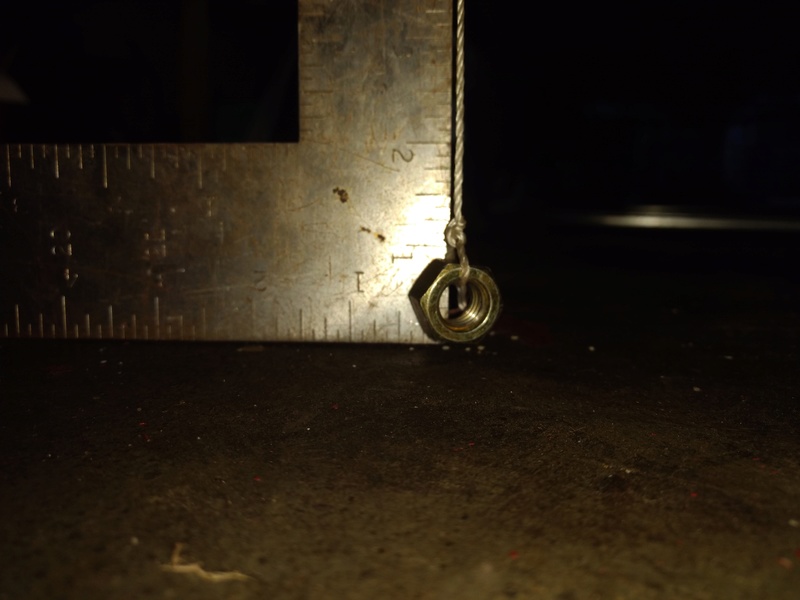 This pic shows the difference between the sway bar mount points. 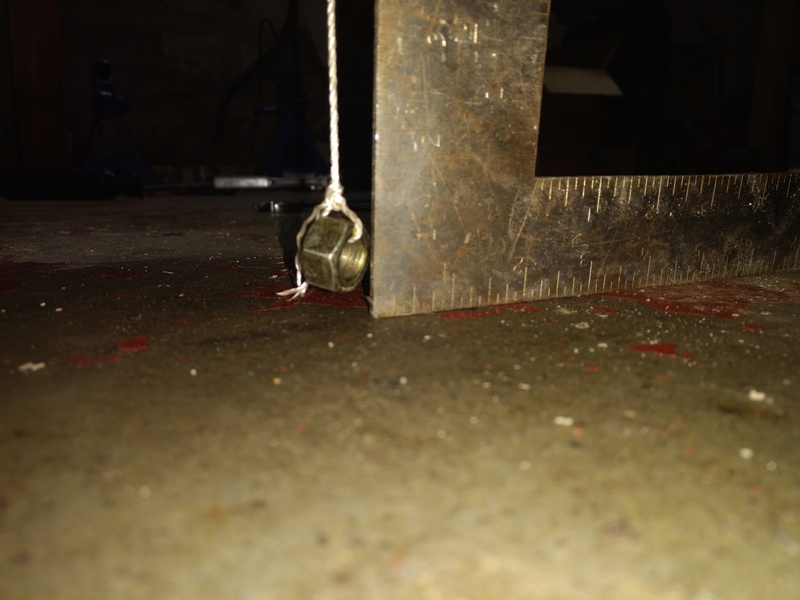 The ends of the frame are close enough to call even. I am now going to try and measure what installed height I need the springs to be to get the stance I want.