I found this interesting. It has been published in many magazines, etc that 1972 was the last year for a 12 bolt rear. '73's & up have a 10 bolt. This is on CL. I bought some parts from this guy and as the pictures show it has 12 bolts on the cover. I did not see the rear for myself as the car was in another location. I have never seen one of these in a '73 & up. It does not look to be modified and I personally know that a 12 bolt will not bolt in without mods. I've tried it. The control arms do not line up. Maybe this was swapped in and the pictures show too much grime? Who knows. A popular misconception is just because it has 12 cover bolts does not necessarily mean it is a 12 bolt. The 12 bolt term refers to the number of ring gear bolts attaching it to the carrier.

Look at the 2nd pic the arms look to be at a weird angle.

Man is that car rusty on the bottom.  Someones been messing with the hard brake lines on it.  And (just going by the pics) the upper control arms look longer than our cars came with.  Good pic 77cruiser !!  Thats the pic that caught my attention.

I know the lower arms from earlier years interchange with ours.  But the upper arms are different.

I'm willing to bet someone either switched the shock mounts from our years to an earlier axle.  Or pressed our axle tubes into an earlier ham.

But looking at the second pic, the top of the ham (not the greasy bottom) and upper control arm bushing ear look very "rust free" as opposed to the rest of the rear/springs/axle tubes/crossmember brake line area.  These areas have the same heavy rust on them.  The upper ham does not.

yeah pic #2 does look a bit off. I was trying to see if there were any welds on the arms.

I've run that same rear axle for 38 years (it is still in the car).

Someone here (joe73 i think) had once posted a link to a eBay auction where there was a adapter to mount a 12 bolt cover on a 10 bolt rearend.

Yes, that was me. But I think tbe rear in that car was fabbed.

What would be the motivation for this? (just "looks")?

Probably, or to claim ignorance when you sell a :72 chevelle with a 10 bolt that looks like a 12 bolt & say "I didn't touch it, it was like that when I bought it" 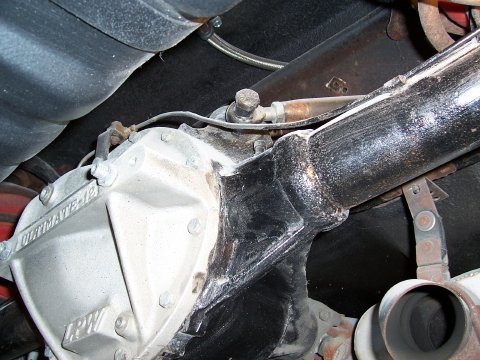