Very nice 73! I've never seen a 73 Chevelle with the smaller side opera windows. Is this an option?

I have no idea. I , myself have never seen one either. What an oddity...it has to be a low number produced specimen !

There has been a couple owners on here in the past with that small qtr window. IIRC, the exterior stainless trim moldings for them are unique...even to the small windows on later models.

I'll be interested to see the final bid. Seems like it's in collector's condition to me, I could see taking a chance on it with the right storage facility.

Too bad it's got those dents in the trunk lid and tail panel.

Yeah, I would be a terrible investor. To me that dent gives it character.

I'm sure a good body shop could fix those...and, color match the paint?

Regarding the smal qtr window...I found a Build Sheet in a '74 Malibu that has the small qtr window (as compared to the large window used on most that was partially covered with an exterior patch panel). It shows a RPO code of D37-Sm Qtr Wid. I can't find any reference to that code anywhere. Probably the same code used for the '73 small window? 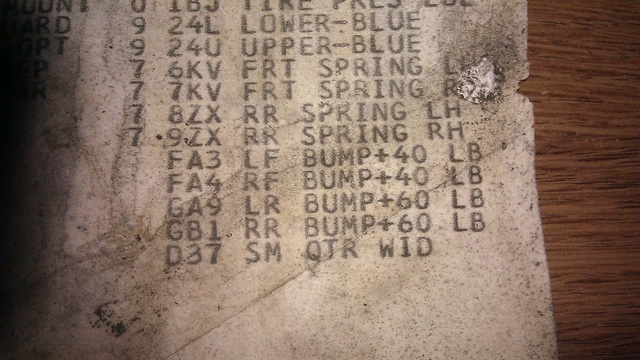 Wow, great info on the build sheet! I've never seen one with that code. I've also noticed that the base model Malibu from 73 to 77 all had the larger quarter window?

Regarding News on the 1974 Malibu build sheet- If the car coming down the assembly line was the Malibu Classic, all build sheets should have this standard RPO code on it to identify it as getting the smaller window treatment. All "Malibus" from 1973 thru 1977 got the larger rear window, and the "Malibu Classic" and the 1974 thru 1976 Laguna Type S-3 got the smaller window also. As far as the smaller window traetment on the 1973- If this was an option in 1973, don't you think it would have been offered on the top-of-the-Line Laguna trim instead of the lesser priced Malibu, it would only make sense in the scheme of things. I have searched all of my 1973 literature and the smaller rear quarter window was never an option, at least here in the US, I don't know about Canada. It was never listed in my 2 option books and never any mention in my '73 Dealers sales Album. Some of the 1974 Malibu Classic cars that I had found in the salvage yards had a padded rear window factory insert over the rear glass, I pulled it our to see and sure enough the full size window like the 73 glass was in there, other 74's had a real smaller window with the rear interior trim piece like the 75-77's-a thicker "Molded Window" treatment framing the smaller "opera" glass. A dealer could have ordered this panel in late 1974 and made their own rear window as part of a Dealer Package, any thing was possible as far as a Dealer goes, hope this helps. Always good to share our thoughts on these cars-we leard things every day-thanks for reading-Mitch