Oh man, that looks awful. I love the large quarter windows. Don't think I would have kept my car if it had the operas.

As for the car, it would look a lot better if it were lowered a couple inches.

I like the opera windows, it looks better with the landau top.

LOVE the vette wheels, what years were those used.
I've been looking around for some, but not sure what to ask for.

Here's an answer for you Roadcaptain:

I think they were just an option in 76 & possibly 77, but regardless all 76 - 82 aluminum wheels were the same. Some years had black centers while others were polished. The caps changed through the years & in 78, they had a red stripe around the lip for the anniversary edition.

No problem. Like I said before, the more I look at my car, the more these wheels grow on me.

I think I spun a main bearing last night while cruising down the highway.

I guess she's gonna get a new powerplant sooner than I expected. Maybe I'll see how fast

Just in case people are wondering how or why the motor went, I had developed a rich running condition due to needing a carb rebuild. Honestly I didn't want to waste money rebuilding a 2bbl carburetor for a 305 & I really didn't want to throw on my 4bbl either so I knew it was going to happen sooner or later with all of the washdown I was getting in the cylinders. I actually had stopped driving it on a regular basis & had it parked for the winter, but yesterday was too nice not to go for a cruise. I'm willing to bet on at least one scored cylinder if I tear it down.

I'm running 10w40 now. Oh well, I got the old Lady's Furd to drive since she went out & bought a new Durango. I was planning to sell her Taurus so we could get out from under that payment & have a little money left to get the Samurai tagged for the winter. I'm gonna sit back for a minute & try to get some things figured out.

Diesel oil? IDK, I thought about running Lucas as a quick patch, but we'll see. Like I said before I really haven't been driving it a lot, but when her car sells I'm gonna have to scramble my A$$ off to get the Samurai finished & legal. I guess it could be done by someone a little less lazy, lol. The Suzuki only needs the engine reassembled (think VW beetle) & a new soft top to put on, so it shouldn't be too bad.

Guess I'm just kind of shocked/bummed that I really won't be driving it anymore until I get an engine built. Damn 305 that's why it blew, LMAO.

No new progress, but I did contact the previous owner yesterday to ask a couple of questions about the repaint job & update him a little on Brown Eye. Of course the car had been side swiped at one point in time!

No major damage other than a cut & patched panel & for some reason it has a Malibu Classic tail panel. Now that the bondo is starting to crack I can notice it's about 1/8" thick. Anyways, I found out that the last guy called Brown Eye - "Big Ghetto". Use your imagination, but I think I saved a good car from going donk.


Oh yeah Black I'd take the 307 if you're going to scrap it. I could probably get a couple months use out of it.

Good save there! Hate to see good cars turned into "DONKS". I hate those cars!

Got some new goodies this last week!

I scored a good 350 for $200. It's got a fresh set of swirl port heads (yeah... yeah... I know), new head gaskets, new timing chain (I might switch that out for a gear drive though), & now an Isky 270 Mega cam. I already had a Holley 300-36 Contender intake, Carter AFB carb, & some Ceramic Coated Hooker Headers. I just ordered a new mini-starter, performance dizzy, 2200 stall converter, high-flow aluminum water pump, & some Summit fully welded mufflers! Now I just gotta wait on the stuff to come in so I can get to crackin'.

OK I'm posting up the renderings of what my final plans for the car will be. I'm no Chip Foose & my car won't be getting "Overhauled" in a week, but I'd like to get to this point in at least two years or less. 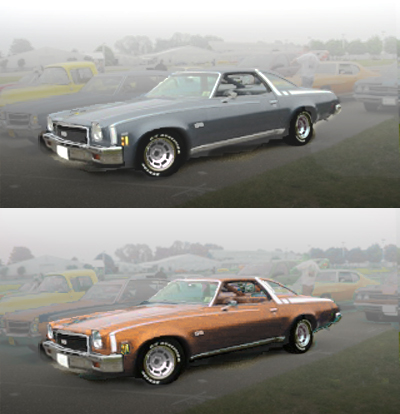 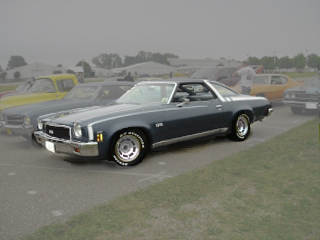 I know it's not my best Photoshop job, but if you look closely you can notice subtle changes that should really make it a one-off. I'm stuck between these two colors & either white or black stripes. Some of the things to notice are the 2-3" of lowering, 74 style headlight buckets with 76 base grille, tucked bumper, SS badges (either that or all emblems shaved), & of course the Vette wheels. White letter tires will eventually happen when my current tires wear out. Undecided on window tint at this point.

Man, I like 'em both.
Gonna have to stare at them for a while.
really dig the striping, especially the fender.
The white looks really good on the grey, black may lok better against the bronze/brown.
Hmmmmm.

Can't go any bigger. I saved it as a low res JPEG, so it would be fuzzy if I enlarged it. The Bronze color is supposed to be an in between mix of Burnt Orange & Sunset Orange. I like both, so I tried a custom hue that's in between. If I go with silver, it's gonna be medium toned with pearl to make it brighter in the sun. Unfortunately a picture can't capture that effect. Compare my avatar (dim light) to the pic (bright light) & you can kind of understand what I mean. I really want the car to jump out while being subtle.

get it orange one man...nothing tops burnt orange and i like the touches that make it unique.

had that stuff for sale here RAGO LOL HMMMMMMMMMM

What? When was that? Better yet, what brand was the distributor? 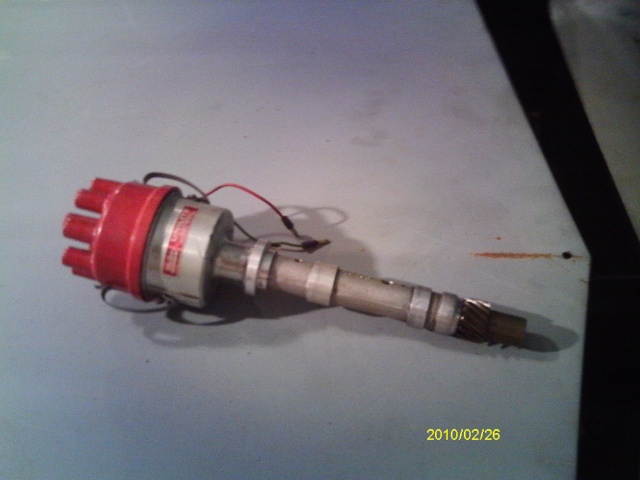 You had that stuff for sale back in January? I really need to pay more attention to the classifieds. I paid $35 for an Accel unit so I didn't get a bad deal, just wish I would have seen that one. Sorry bud. Next time you go on one of your garage sales I'll pay more ataention, lol.