Can anyone give a fail proof way to authenticate a 1974 S3 El Camino, other than the build sheet?

The build sheet is the only way to know for sure. It will have a notation on it stating "soft face". But I've only seen this on the 1975 year models. 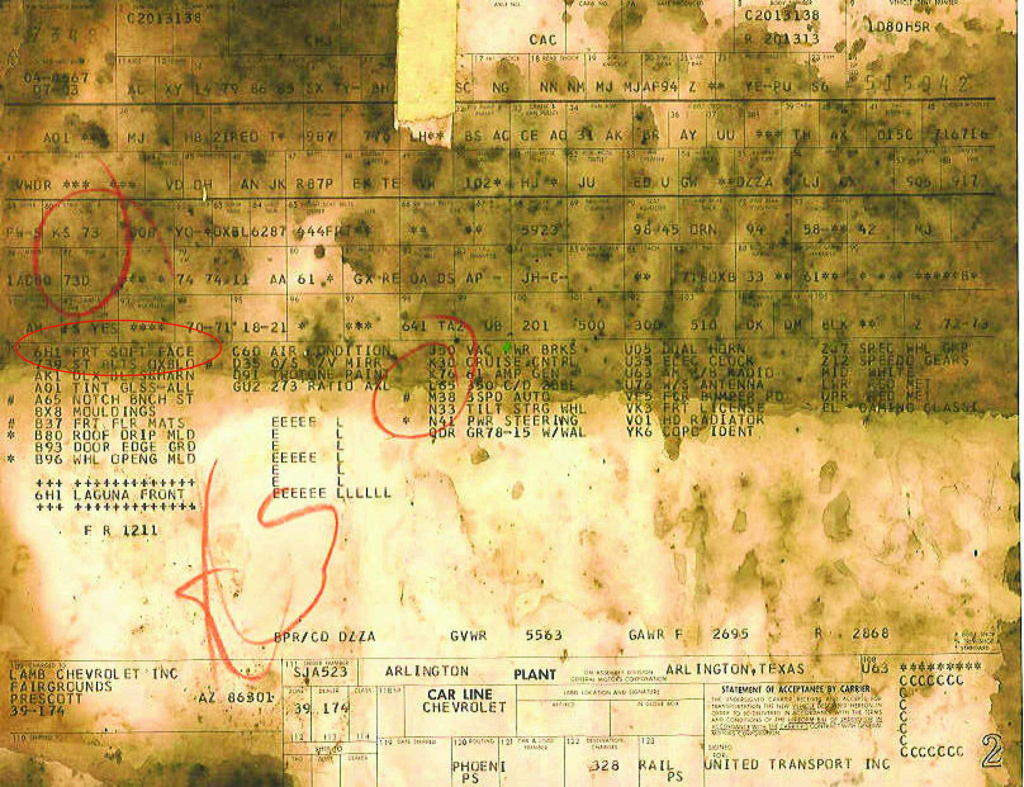 The "Soft Face" Laguna front RPO 6H1 was only available in 1975 and not in 1974. If it were available it would have had the flat one as in 73'/74. There is a picture of one prototype in the Chevelle 50th anniversary book by Mike Mueller and the same picture is on the GM photostore website. This option was ONLY available through COPO or dealer installed, there is no reference that this was offered in 1976. My 75 el Camino SS with swivel bucket seats and factory tach has the Laguna S-3 front with the small SS emblem used in 1975-1977, they DID NOT come with a Laguna S-3 emblem on the front. A build sheet is the only way, mine was not under the carpet, nor on top of the gas tank, could be over the headliner? assembly plants would stuff them any where if they put one in at all-Mitch

afaram wrote:Thank you for your reply. I have seen this build sheet, but I am beginning to believe that the build sheets differ depending on where it was built. After 44 years I just pulled my build sheet and the critical left side is missing.

You are correct; the build sheet format can vary slightly depending on the final location. Chevrolet owned and operated assembly plants would be more likely to have the same format that a "satellite" GMAD (GM Assembly Division) plant, like Fremont.

Mitchell Murphy wrote: A build sheet is the only way, mine was not under the carpet, nor on top of the gas tank, could be over the headliner? assembly plants would stuff them any where if they put one in at all-Mitch

Build sheets weren't really intentionally "stuffed" in the vehicle as Easter Eggs to be discovered by future historians. They were intended to facilitate the build only, and to be discarded at the end of the line along with any other trash (inspection/repair tickets, paper coffee cups, extra fasteners, etc). The reality was it was often easier to build the vehicle up around where ever the build sheet was laying which is why you often find them with sealer sprayed across them, screws shot through them, etc.

There were several build sheets used, each tailored to meet the needs of the specific area: Engine line, chassis line, interior trim, cushion room (seat build up), front end sheet metal, axle line, final line. Each of these areas is an opportunity for a build sheet to be left behind in the "usual" spots - on top of the fuel tank, behind door trim panels, above the headliner, under the carpet, stuck in the seat springs.

Vehicles are built with build sheets taped to strategic areas even today.