Lets see ive been looking round and i think im going to attempt to fabricate my own H-pipe for my exhaust save a few bucks and do it my self however im debating is this the best bet for a street strip or should i just keep it straight pipes or even go x-pipe any input here would be helpful right now im running straight pipes but i figured a h-pipe would benefit a little in the torque department.

an X pipe will give it a bit of a different sound- i had a vortec headed, HOT cammed 10:1 355 that was good for 400 "magazine horsepower" in my 71 Nova. with the H pipe that came with the Flowmaster exhaust, it sounded pretty good- deep but mellow rumble at idle, and mean at WOT with a slight drone at highway speeds. when i put a Hedman X pipe in place of the H pipe, the idle mellowed out a bit, the drone went away, and it sounded flat out wicked at WOT- 5000 sounded like 7000, and 7000 was purely orgasmic.
but, as is always the case with things like this, every engine in every car will act different. but i will say that the 89 5.0 Mustang that one of my friends has sounds pretty wicked with the X pipe between the long tube headers and Flowmaster 40's- and it's only about a 300hp car. 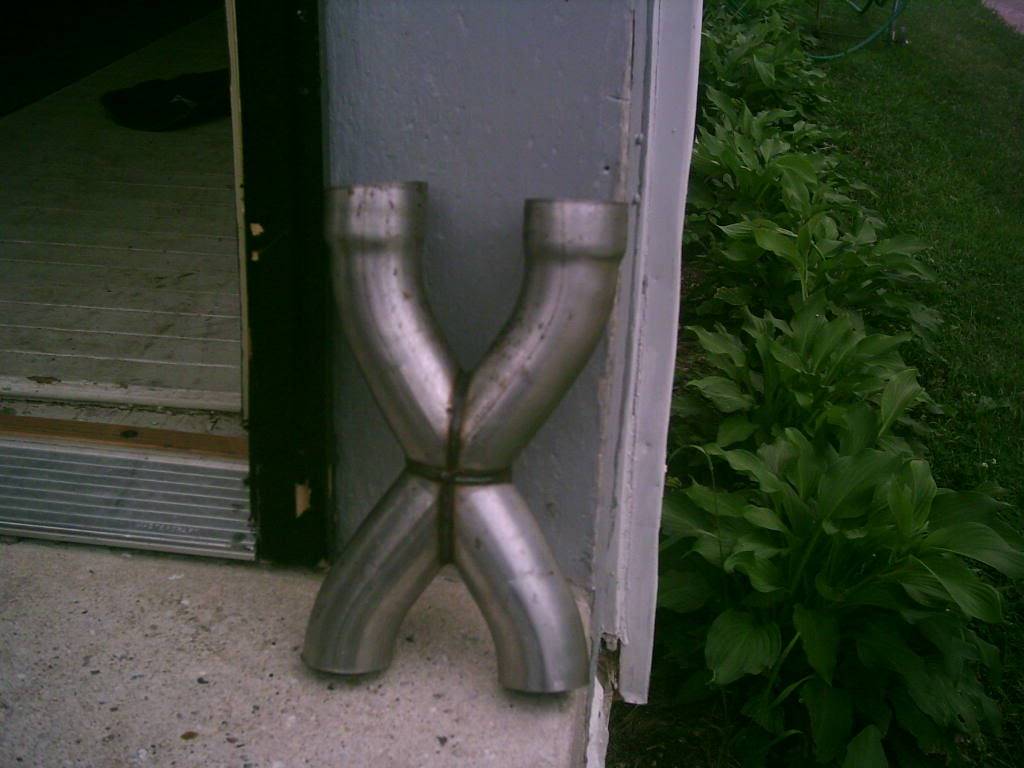 ahh i see if it were 2.5 id be interested it seems you have just bout everything i need limey lol

If you have the pipe, a torch and a welder, do it. If nothing else, it will smooth out the flow of oddly matched pipes or one side mandrel or one side crinkle.

If you have to pay anything more than 20 bucks for it, don't worry about it. I remember you telling us about your combo and it won't do much for your particular setup at this time....

when did this (14's) happen ? wheres the proof ? that car has never seen 14's !!! ha ha and by the way... adding an H-pipe will increase torque, and quiet the car down slightly. dont forget to mark the exhaust with a crayon, then drive the car around...the crayon mark will have burned off slightly...this is where the H-pipe should be installed !! jeff

Good information to know about the crayon, j. I guess that makes sense. I'm starting to wonder myself what the advantage of dual exhaust is over a larger single. I mean one 3" tube flows more than or about the same (I forget) as dual 2 1/2, plus both banks are tied together all the way from the Y pipe back. Add in less expense, less weight, & not having to find a dual exhaust crossmember & single starts becoming appealing. My problem is not seeing 2 pipes exit the car looks uneven so I'm still up in the air on my exhaust.

I'm thinking of some Hooker Max Flows, but don't know how they sound on a SBC & I'm unsure of what size to go with or if I'm going dual or single yet. Decisions, decisions...........

OK I looked around & here's what I'm seeing, any thoughts?

Just found this one, it's closest to my planned set up. F'ing LOUD!

They sound louder than what I keep reading about on the net. Most people say it's a quiet muffler until you really get into it. I heard them on a 5.0 rustang once & liked the lack of resonance inside, but I don't remember what size he was running. His sounded real close to the stang posted above. Maybe it's the cats that give it a deeper, softer tone?

Rago this guy is running electric cutouts open for power closed for no power, and less police probs while closed as wel you heard the sound difference=======>>>& this Z28 that confuses me. He's running 2 different exhaust set ups?
https://www.youtube.com/watch?v=P5TD2WNdYeI

Well normally that's what cut outs are for, but read his explanation & tell me what you think:

" Hedmann Headers, Hedmann Y-Pipe, Magnaflow Metallic core Spun converter, Summit cutout, Mccord power plate with a homemade resonator muffler/tip off of the MPP and then out the other side of the cutout is a dynomax mandrel I-pipe into a Hooker Max flow muffler and a single tailpipe."

2 exhaust set ups? Neither side is open exhaust like normal cut outs


Yeah the trailer park Blazer is similar to what I want to run unless I go 3" single. IDK yet.

Not a Flowmaster fan myself. I rode in my brother's truck with 40's on a trip once. The interior drone was just too much.

On a side note, that cam might be a poser cam, but I love the way it sounds! Beautiful car to boot.