Me too. Maybe when I get to the point of a body off resto I might do the engine compartment in the same red that I will be doing down the side of the car.

Thanks guys, just not used to seeing it all a different color, freaks me out a bit! Trying to keep only two colors under the hood, black and body color. Getting there slow but sure!

Well, saw that the foam was rotted out in the heater box assembly, have it out of the car and figured anything would be better than what was in there, so had some packaging foam, and some 3M super adhesive, made new foam for the doors, looks like it'll work! Smell better when the air passes they there, and won't get bits of foam in my face and mouth as I drive. 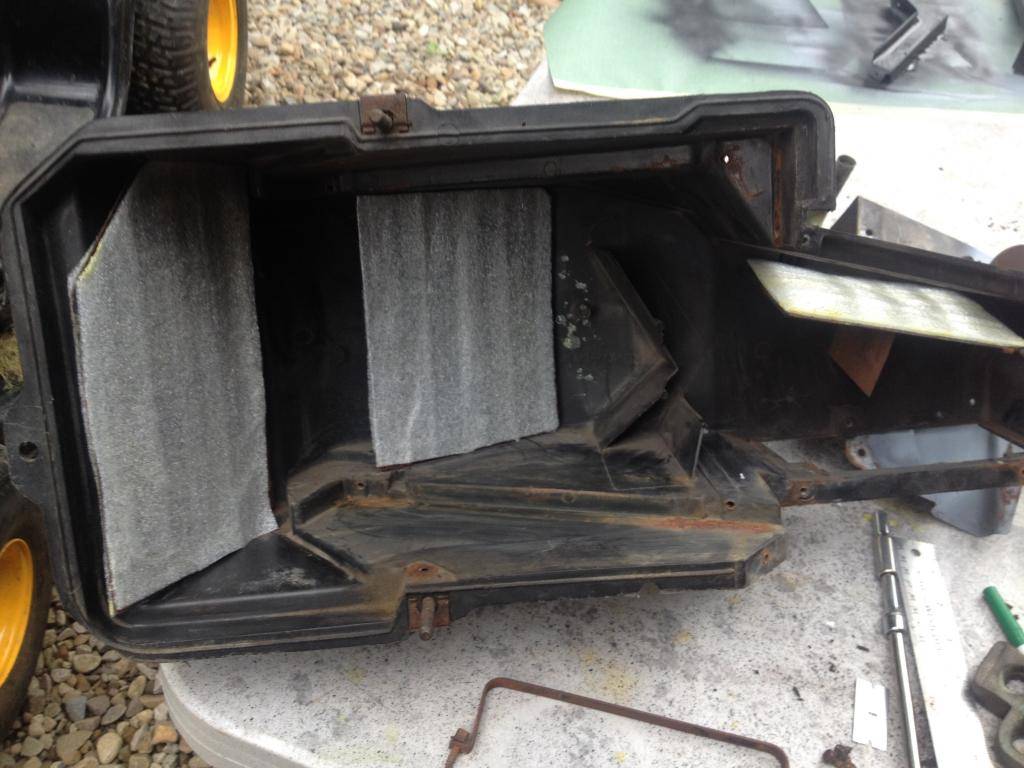 Well it's been awhile, still sits pretty much the same way as in July. Been rounding up funds to replace all my -6AN line and fittings with -8. Can't hook up the fuel system till I get the necessary AN fittings. Need a new sender in the tank, can't put the tank in, can't hook up the exhaust with the Hedders or put the starter in till I run the trans cooler lines. Can't put the dash in till I patch the roof, about all I can do is hang the quarters, but wanted to make the car start and run so I can drive it out of the garage to grind on it outside. So been doing other stuff, blocking the doors stripping the bullet mirrors building the rear bumper. Getting the small odd and ends done first.

What do you mean "building the rear bumper? . Sectioning the original or making a new one from scratch?  Whatcha doing?

Ohh sorry nothing exciting , I had blasted the rebar, painted it gloss black, painted the inside of the chrome face bar silver, just putting it all together with stainless hardware.

chevellelaguna wrote:Thanks guys, looks like that's what I need, I called our GM parts guy that we deal with and it looks like with the info that he gave me and what everyone posted I'll be set!! The bushings were so deteriorated when I took the car apart that they just fell apart into nothing. Just wanted to be sure that they go in their perspective location.

I have a question on the body mount bushings. I think I have the same kit and Ill be putting them on in 2 days. I was going through them and im not sure but i might have 2 extra bottom ones that were in their own package. they are kinda tapered on the open side and was just curious as to where you mounted the bushings if you would remember. I tried using that one diagram that mcarlo77 posted but in that kit I only have 2 different numbered under body bushings, they list 4 different numbers. Being you got your kit from groundup as well (and I already called them asking and they don't know) and got yours figured out, I figured Id pick ur brain.

That's odd because I didn't have extra bushings. Sure they're not for the front rad support? They didn't have those in stock when I lorded my kit. Still have to get the rad support ones. Check the pics on page 7 of this post, the large bushings go under the firewall, as well the rear most of the frame, that way there is adjustment of the body on the frame , the two snubbers go above the shocks.

is possable they are for the core support. I ordered them all at once. does yours have 4in front, position 1 as they call it?
I only have 4 of the big hole ones.

Finally ordered up a 3/8"sending unit for the gas tank, will have to connect it to the aluminum fuel line. Will have to get some AN fittings from Summit. Also got a new master cylinder, will be able to make the new lines to connect it to the prop valve. New power steering return line, I twisted the crap out of mine taking it apart. So hopefully will make some progress on the car.

Similar topics
» To Laguna or not to Laguna that is the question?
» LS7 Laguna S3
» 75 laguna rear bumper filler and tail panel unique to the 75?