Anyone know any facts about the story or history behind the SE models? Limey? I am starting a feature area for them on my website. One I have a little background I will make it public so you guys can check it out.

From what I gather, in a nutshell, the SE package originated in a dealeraship out west. It was not a "factory" option. Basically designed to help out with lagging vehicle sales in the 70's after the gas / performance crunch. The dealership installed a graphics and spoiler package to the vehicle.

I think it was a good idea to boost some sales.

I found this on one of Limey's posts I hope he doesn't mind me borrowing it.

"1977 Chevelle SE One of approximatly 50 ever produced from subcontracts thru GM motor division to boost sales of the Slagging Chevy Sales, The One I am getting is one of only supposed 10 that were Black on Black bucket seat cars and all but two that I have found were optioned with 350 /350th the other two were 305 cars he says were original but I have not found any data to back that claim up for all that I have found were 350 cars. Two were made with T-Tops only one has survived, The Chevelle SE was NOT a factory produced car. The SE was created by a company in Witchita, Kansas called Special Editions, Inc.
who modified a mere fifty (yes, 50!)

All fifty cars were either black, white or silver and were optioned with a 350/4bbl engine, these cars had a rear trunk lid spoiler that had CHEVELLE SE on the right hand end of the spoiler. The spoiler had yellow and orange pinstriping about 2 inches wide that went across the rear spoiler and down the sides of the car. Under the front bumper was a fiberglass ground effect type spoiler. One of these cars was delivered to Bill Southern Chevrolet in Newkirk, Oklahoma (no longer in business) and the car was white. I know the name of the original owner, but he doesn't know who owns the car now. The silver one was delivered to Charlie Cannon Chevrolet in Ponca City, Oklahoma (no longer under that name)."

All 50 cars were built in the Leeds Plant in Kansas City Mo, and sold after customization thru the Special Edition Company in Wichita Kansas. All were sold thru Lester Moore Chevrolet Inc. in Liberty, Mo

The 1977 GM cars didn't have a Service Parts ID sticker on the glove box door like later models.  But if GM did build 50 cars for one dealer, these cars will have a unique RPO (regular production option) on the build sheet in order to track installed options for warranty purposes.

Here is an example of what I am talking about.  I have a Joe Gibbs Silverado truck that was dealer modified just like the Chevelle SE.  GM detailed a service bulletin noting how to identify these dealer installed options and also that Joe Gibbs Performance was responsible for warranty on these 'upfitter' installed items. 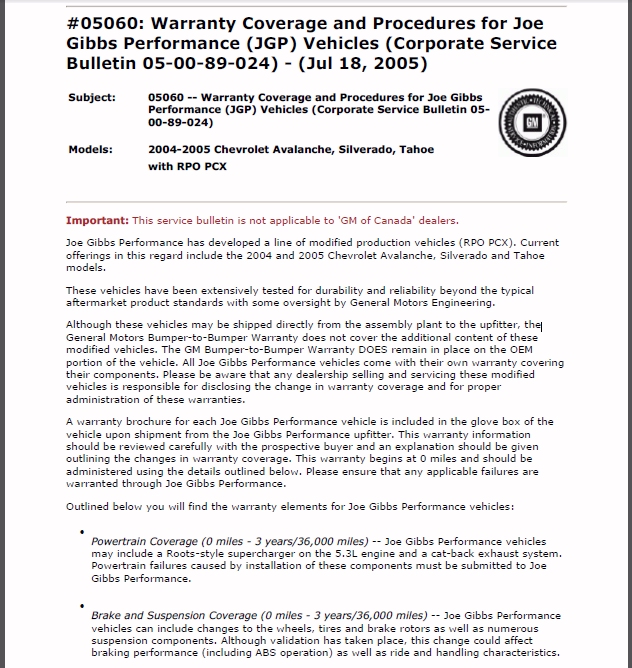 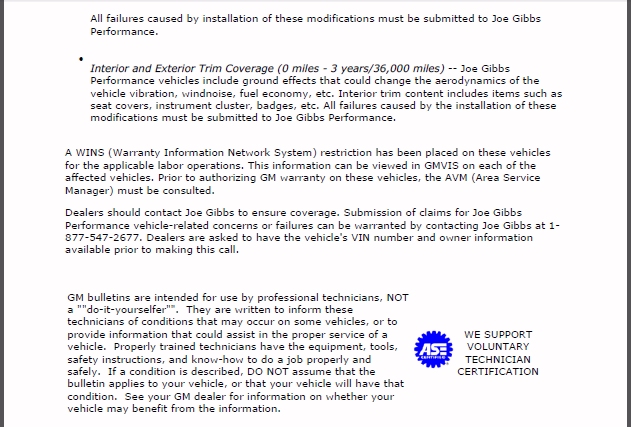 Yes, dealer communication was not as detailed in 1977 for a specific dealership service bulletin, but GM tracked fleet purchases like police cars and other quantity buys so if there was 50 cars, then there should be a unique RPO code.

I have the feature on there now. It is on the Featured 2 page under the Portfolio. Here is a link.

Limey, I have a master RPO code list.
Send me a PM if you need it for comparison.

I think if there were a "unique RPO (regular production option) on the build sheet in order to track installed options for warranty purposes"
Then there would be part numbers for the front and rear spoilers as well as the sticker graphics. Everything has a part number.

According to Limeys info above, GM did not produce the SE. It was a company in Wichata, Kansas.

"The SE was created by a company in Witchita, Kansas called Special Editions, Inc. who modified a mere fifty (yes, 50!)"

Sure, the dealer simply ordered 50 cars for or with the intention of Special Editions inc. to due the "conversions".

From what I've seen dealing with a van conversion company years ago, is that the company orders a bunch of vehicles from the manufacturer. They order them the way they want them optioned IF NEED BE. Nothing different than a person ordering the car themselves. Then they (the company) does their "conversions" and put the vehicles up for sale. They are still brand new never titled. Just have extra work done to them.

I dont really see any part of an SE that GM themselves did special. Hence my opinion that there wouldnt be any info on a build sheet regarding it.

If GM produced the spoilers or the graphics there would be part numbers. I believe that Special Editions Inc. did that themselves hence the model name "SE".

None of the SE options would be noted with an RPO on a build sheet.

A group purchase would be tracked with an RPO code so dealers would be able to identify who is responsible for warranty coverage.

The example listed above, my Silverado truck is a generic LT model, but has the RPO code PCX listed on the build sheet which tells a dealership that warranty coverage is very limited due to upfitter modifications, and the outfitter is responsible for warranty on those items.  If you look up the code PCX, the master list only states 'Control, Sales Item No. 115', and after seeing the service bulletin (posted above), PCX identifies the Gibbs Performance Upfitter.
There are thousands of these codes listed with this type of identification.  There are RPO codes for sales to certain countries, large fleet purchases like glass companies & pest control companies, and even noted upfitters.

For the Chevelle SE, I not asserting there will be dealer options items on a build sheet.

What I am asking is if there is a code that cannot be identified or has a vague listing?  It could be the group purchase or upfitter code that is common to all the Chevelle SE models.

Similar topics
» The Story of the Great Trellis-raising
» The story of a girl and her box
» Any "history" in your garden?
» Are you growing history?
» WW11 Italian History (or perhaps 'Italian History')

Yesterday at 9:22 pm by REVINKEVIN