Finally got the Elco on the road. I drove it from the hangar where I built it, to the local airport where the shop is. I have all my good tools at the airport, ( and heat !)
A friend & aircraft mechanic like me, has front-end alignment equipment there, and he is gonna do the alignment. A couple other issues to take care of also, like shifter adjustment on the linkage, and a rattle under the back end. The speedo doesn't work either.

So for the ride over there, my 6 year old grand daughter came along. She has been pestering me about when "we" are gonna take the Elco for a ride

Since she was with me, I didn't do any massive burn-outs ! ( just a couple small ones !)

Congrats! What a milestone. And to share it with you're granddaughter- priceless

AWESOME!  Congratulations ... glad to see it has been on the road!

This is the front side of the spare tire cover, which of course is located behind the passenger seat. It's part of the stuff I saved from the '77 I had to scrap ( sniff. 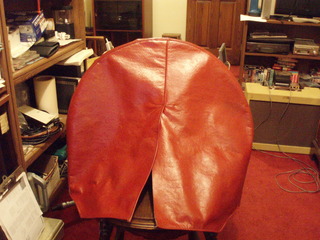 Hey thats great!! Good to finally drive it I bet!

I still have to fix some odds & ends. The fast idle cam on the carb was sticking ( at 1500 !) I fixed that today. And I fooled with the right side tail pipe position.
I need to set the initial timing ( on Caddy engines the guys are running as much as 20 degrees initial ) I'm gonna swap some springs around on the mechanical advance etc.

I haven't bought a spare tire for it yet either. Exhaust note isn't a loud as I thought it would be, once it was outside !
And the drive shaft that I built didn't show any vibration at about 60+ .. Speedo isn't working. Might be on of the cables at the cruise control transducer (?)

I'm ordering a new Power Master starter for it also. It has a Chevy starter on it, which was likely installed by the previous owner of the car the engine came from. The guys on the Cadillac power forum spotted that when I posted an engine pic !
It looks the same except the main case ( & field) is shorter....

Carb is still acting up. Didn't run worth a dam... I removed it from the engine yesterday, and I'm going to tear it down to the last screw & re-assemble, while checking all the adjustments. A friend did this for me a couple years ago, and I'm not sure exactly what he did as far as adjustments etc. And I want to measure the rods on the power piston & see what hangers are on it...