Does anyone have any experience with this unit or seller? The posi is supposed to be yukon unit, but the preload spring looks different than other yukon units i found. Bearings are supposed to be koyo and ring and pinion are motive brand. What puzzles me is that it all seems too cheap to me, but the seller has good reviews.

The Yukon brand is good. Is that a Yukon part, hard to tell. If you google the manufacturers part number that the seller supplies, it comes back to a Motive Gear.

Also, if your intending real big power in your car. I'd pull and axle to see if the outer bearing surface is worn requiring replacement of the axle. Reason being, if you need axles as well, you could buy a posi unit for the 8.5 that takes 30 spline axles. That would make you a stronger rear axle since you would be buying everything anyway.

I'm a fan of Timken, Koyo and SKF bearings.

Thank you for your reply!
I have googled the difference between 7.5 and 8.5 rear ends and it looks more like an 8.5, but the “dog ears” dont have a completely flat lower side, it has a kind of half circle dent near the pumpkin. Hard to explain, will try to post pictures. They dont have the distinctive C shape like the 7.5” are supposed to have though, thats why im assuming the rear end is 8.5”. Is there any other way to verify this without taking off the diff cover?
Im aware of the 30 spline axles being stronger, but i would really like to avoid getting new axles at the moment, since im in europe and the shipping here would be killer. There are bearings available with offset built in so they ride on another part of the axle if im not mistaken?
As far as power goes, it has a stock corvette lt1 with gmpp intake and carb, and some headman long tube headers. Behind it is a 700r4 from the same vette. I was thinking of putting in a 3.73 gears, that should give me a little over 2000 rpm at 65mph, which is acceptable imo. 4.10 in the ad is irrelevant since the seller offers many different ratios, but thanks for the heads up anyway!

Yes, there are offset bearing/seal combos out there and they are decent. I think the 3.73 with 220 or 700r4 is the best combo out there because of the ratios of 1st and 4th gears.
To verify the axle, climb under there and look for the axle codes stamped into the tube. Its on the passenger side axle tube. closest to the diff housing and on the front of the tube. By front of the tube I mean if you are facing your passenger side tire, the 3 o'clock position which is towards the front of the car, follow 3 o'clock towards the diff housing. Thats the front of the axle tube.
Grab a wire brush and some cleaner and brush the area. Should be a long line of numbers and letters. Post them up or search the net to verify what you have.

Basically the 8.5 cover is a true circle. The 7.5 has a squarish shape to it.

Im not sure about that, as far as i know both covers are round.

The “dog ears” (triangles that stick out of the diff casing at 5 and 7 oclock) look pretty much the same as the ones in this video:
https://m.youtube.com/watch?v=YxPOXgAAImk

This is the posi I got off Ebay. So far, so good and I think it will last a long time.

I also ordered a re-gear kit that had the seals and crush sleeve. I already had the gears, so the cost was better for me this way.

abajc3 wrote:Im not sure about that, as far as i know both covers are round.

The “dog ears” (triangles that stick out of the diff casing at 5 and 7 oclock) look pretty much the same as the ones in this video:
https://m.youtube.com/watch?v=YxPOXgAAImk

I found this number on the axle tube:

But i cant find a good source of info to decode it. Any help would be greatly appreciated

abajc3 wrote:I found this number on the axle tube:

But i cant find a good source of info to decode it. Any help would be greatly appreciated

It appears your original rear end was 2.56 open gear. Here is the chart below that listed on this site.

That would be correct. The car is a dog off the line but i managed to get it up to 130mph once.

It should be an 8.5" rear end. But I've been told that some of the 77 actually came with a 7.5" carrier. The reason I think this is possible is because I sold a rear end off of a 77 El Camino last year that had a code AA which does not come up on any typical GM documentation. Then I check on a Oldsmobile site and it mentions that this code is a 2.43
gear. So I would assume this is a 7.5" carrier. Not sure but would love some input on this. 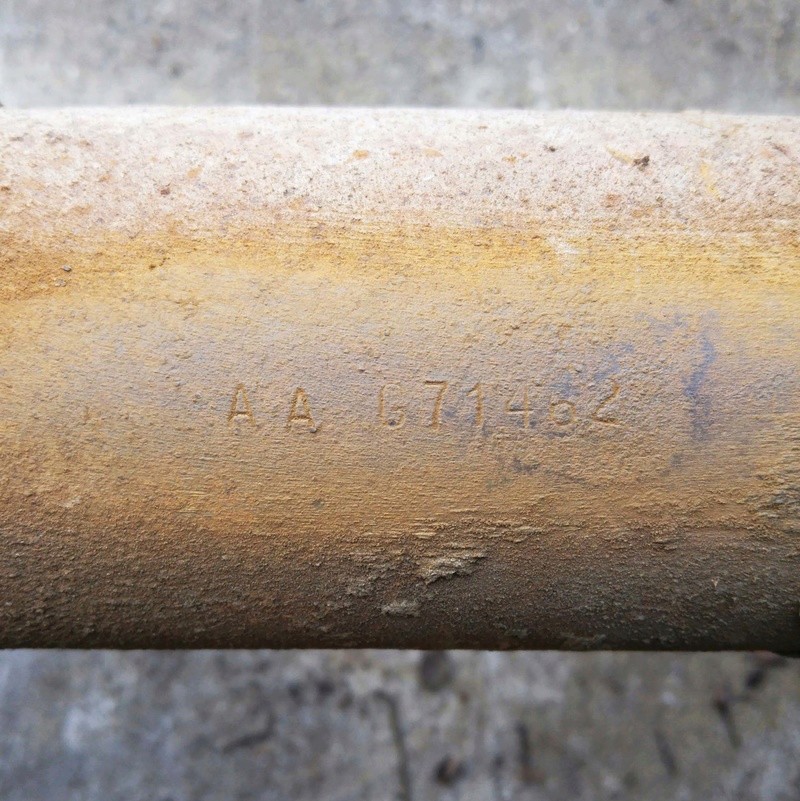 It is an 8.5" rear end. I've never heard of any 73-77 A-body car getting the 7.5" rear end. The only thing to really watch for is if it is a c-clip axle or a bolt-in axle. The center sections are the same for both, and it only really matters if you want to upgrade the axle shafts themselves.

g3chevy, the rest of the axle will show if it is an 8.5". I highly doubt that GM would put a 7.5" center section in a 8.5" housing for just one gear ratio that is rarely optioned. Besides, it simply wouldn't fit.

Thanks to everyone for your help! I guess i will order that posi kit and see how it works out. From what i could find from the model numbers it isnt actually a yukon, but a powertrax grip LS unit. Not much info about it out there, i guess ill just have to try and see

Heres some good info for visual identification of your rear axle. But notice that it also lists the 77 A body as having an 8.5 and a 7.5 ring.

I have read that article, but not all of the info is correct. I have measured the distance between cover bolts and according to that article i should have a 7.5” diff. But i also have large flat reinforcements on the front side, which are supposed to be unique to 8.5”. There is a lot of confusing info out there

It is true that the 8.5 started phasing in around '71, the Chevy A bodies got them last. There were some BOP A bodies that got them, but I'm not sure which ones. As far as I know, they would have been bolt in axles instead of the C retainer. The G3 was supposed to start production in '72, which was when the change over would have happend. The changeover was delayed due to a UAW strike. As far as I know, all '71 Chevy A bodies either had 8.2" 10 bolts or 12 bolt. '72 was mostly unchanged due to the unplanned carryover. '73 was the official changeover in most publications. I have heard of some very late '72 Chevelles coming with the 8.5", but I haven't seen one in person.

I've never seen an 8.2 rear in an all original 72 A body. They all had an 8.5. I'm sure they exist depending on what plant had to deplete their stock.
Currently, my buddies 72 cutlass, 71 chevelle and 71 skylark, all original cars with still less than 100k on them all have their 8.5 rear ends. I'm sure they're out there. Guess they were lucky.

It could be a plant thing. We would have cars from the Leeds plant around here. I've seen 8.5s in other A bodies with the bolt in axles. If you've seen them in the Chevys, there you go.

The original rear in my 73 has the bolt in axles.