Also too, the 76-77 taillights seem to have more of an angle to them, where as 75 appear straight up and down.


I love to watch you two joust. It never gets old.

74MonteCarlo wrote:Also too, the 76-77 taillights seem to have more of an angle to them, where as 75 appear straight up and down.

Yeah, that's what I'm trying to tell HD. NOT ALL 76 & 77 cars had those gawd awful quad headlights & opera windows. Look at my previous posts. OTOH with the tails, ALL 75-77 tails can be swapped. Sure you can tell subtle differences, but who's to say I might not get bored looking at the clean lines of 76 tail lights & decide to get an ugly set of 75's. ROTFL! Just razzing you '75-heads.

I love my tail-lights. 1 year, ONLY tails with the 'bowtie" inside, clean, simple and PURTY.

Besides, if we ever race, that's all you'll see anyway---ZZZZIIINNNGGG!!!

Been a while since I directed some smart A$$ in your direction so I thought I needed to. Just joking about tails, but dude if we raced there might be some good competition since you keep biting my style. Back to ya buddy, LMAO!!!!

Seriously though, your motor is a spitting image of mine down to the headers.... & you definitely have a BAD A$$ set of wheels.

If you didn't zing me once in a while, I'd be worried.

Still haven't found a good skit show to replace it. Mind of Mencia was funny for the first couple of shows but it got old quick, that weird guy with the drawing board is just too odd, & Tosh.0 is stuff I can find myself on the internet. I get a bigger kick pissing off the fine fellows on this board. LMAO.....

that must be why when my parents bought a NEW 77 Malibu wagon,it had round headlights..

Don't know if you guys know this, but my '74 Malibu Classic with the little side windows, has the full size glass behind them, just like the base models. The factory vinyl top covered the factory bondo they used to shape the top around the little windows. On mine, I removed all that vinyl and filler crap and welded in panels to make a smooth paintable surface.

It was kinda amusing cause I was like WTF is this. Must have been using up all parts possible.

Limey wrote:Kyle I think they did that all year long for my 74 was made in october and was same way

Maybe. I thought I had read more than once it was the early 74 cars. But hell if I can remember. Forgetful these days.

75 Taillight panels can be swapped to a 76 or 77 but, new mounting holes need to be drilled because the panel is different, the 75 taillights are approx 3 inches shorter on each side.

Just found this this out when I bought a complete 75 taillight assy for my 76.

I just HAD to have those bowties in the taillights!
Now I have to find the rear quarter extensions too, the 75 lights have a bevel in them and it carries through to QP extensions.

Hmmm a roadtrip to Greenville might be in order.

Laguna Budman wrote:It was kinda amusing cause I was like WTF is this. Must have been using up all parts possible.

So true, the 2nd guna of the pair I bought Has a lime green dash and blue seats. That was a WTF moment for me. Dug the build sheet out from under the rear seat and everything matched up.

Talked to a couple of old timer GM engineers about that, and they stated that because of all the striking occurring back then the factories would crank em out with whatever parts they had lying around. This resulted in at least one revolting interior selection IMHO 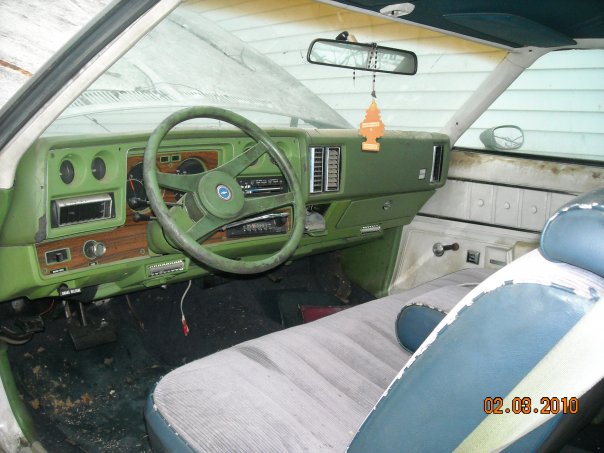 By brother is almost embarrased to restore this one back to match the build sheet!

That's interesting and explains some of the oddball stuff we have all discovered at one time or another.

I have what appear to be Chevelle upper door panels with the padding and stainless trim, versus the Laguna uppers with the oval and wood grain, but the S3 emblem is there and in the right place. I thought that was odd, but with the explanation you gave, it makes sense. I guess I should be happy that they are all black at least.

I got into an argument on the other site about whether or not 15x7 Rally Wheels were available on a Monte Carlo Landau. A few said that it wasn't possible, because the 74 Monte Carlo dealer brochure states you could not get them.

...Until I scanned in my build sheet, showing ZJ7 SPEC WHEEL & ZO3 MC LANDAU. Then they shut up. Then a fellow who knew a GM employee from back then, said that that was a type-o on GM's part, that Rally Wheels were in fact available on a Landau. You don't see many Landau's with originally equipped Rally's. Most have the Turbine II's.

Im sorry guys but hands down the 73 has got the best tail light package and the single headlights on the 73 are by itself they are diffrent from 74 on. The 73 set the pace for the a body craze for me. And its the best looking in red and white big block luguna trim!

I wasn't aware the the '73 headlight housings were different than later ones. I had a '73 Chevelle, and a '73 Elco, but luckily I didn't have any front end sheet metal issues

Edit: I just checked my parts book, and you are correct!!

Don't forget the Pontiac Lemans Sport, Lemans GT and Luxury Lemans. Oh and the Can Am. For the Buicks, there was a "Free Spirit" pace car And for the Olds, don't forget the Cutlass Salon. What about Canadian models?