Here are some pictures of yesterday's small get-together with the local Lowriders. The weather was fantastic, with no salt on the roads, so I brought the Monte out of its garage hideout for 2 hours. Only 4 cars showed up, but it was cool to get out and exercise for a while!

I love Boattails as well. This one looks good from a distance but it's from Detroit and you know what that means! Makes me so glad I have cars from no-salt zones.

Well, tonight was another cruise with the local Lowriders, but it started at 8pm, and because of that (and the fact my memory stick was full in my camera), I don't have any pictures. But 10 cars showed up this time and we had a nice slow cruise through the city before stopping at our favorite American diner hangout called Pink Flamingo. So about two stoplights before the turnoff to the restaurant, a brand new Daytona (exactly like this one in every way http://www.flickr.com/photos/steve-brandon/433296991/ ) came up on us looking for some action. It was piloted by some young gangsters and it sounded mean. At the exact stoplight where we were all going to turn right, we lined up with the Daytona in the left lane, our Buick GS California in the middle lane, another one of our guys in the right lane and me in the far right lane. Instead of turning, I decided to go ahead and make his day, and gave it the gas. To my surprise, the Daytona wasn't able to pull away from my tail, and when I hit 2nd gear at about 60-70 mph, my Monte surged ahead and left him in the dust. At about 100 I let off and by that time he had given up. I went to the next gas station to turn around and join my mates for a late night bit to eat, and the Daytona came in and the guys in shock asked what I had and I replied, nothing much, just a stock 454 with highway gears. I love highway gears!! LOL. And to think that this car is way slower than my white 73... I'm still in shock that I blew away one of Detroit's finest, a new car, with an old heavy, out of shape Monte.

Ah, to be young again. JB

I ain't no spring chicken, JB!

yogreasygramma wrote:I love Boattails as well. This one looks good from a distance but it's from Detroit and you know what that means!

Due to financial considerations (being out of work, needing to liquidate some very important assets, etc), I've decided to put this car on the block, along with my other white Monte, and see which one sells. That's no easy task in Poland; it took me 8 months to sell the yellow 73 last year. Anyway, as y'all know, I'm in love with the looks of the 73, and my white Monte has lots of new trim parts (hard to find and expensive), new suspension, nice new 454 and transmission, etc, etc, and it's a rust-free Arizona car. So what to do?! It's the one I should keep, but this red 74 looks almost as nice (I must remind you why I prefer the 73: cleaner looks, nicer looking front and rear bumpers, nicer grill and rear end) and more importantly, it's a factory Y-code 454/400 car with an electric skyroof (the option I prize most of all), and it's got the original paint on it and as you'll see in the pictures below, doesn't look that bad after these 37 years. The white 73 should sell for more money, and I love the 73s more than a 74, but I will be able to replace that car eventually. Heck, they made 250,000 of them (or 290,000 depending on the source of data), so I should be able to find another one eventually. The red 74, on the other hand, I'll never be able to replace. I have heard of only 4 of them in existence with a factory 454 and skyroof. So which one would y'all let go of if you had to make that awful choice?

I woke the car out of its 2 year slumber, took it out of the garage and had it professionally detailed to bring out the shine as best as possible. They reported the paint's thickness at 35 microns, whereas normally it should be 250 microns. I'm not that familiar with that scale, but I know the paint is thin (down to the metal on some of the sharper edges). And it's been damaged not only by serious cracking and fading, but also due to other chemical spills (battery acid and/or coolant spillage across the hood, roof and sides - whatever happened, it happened at high speed). Still, the venerable road warrior does an admirable job of looking its best for onlookers. 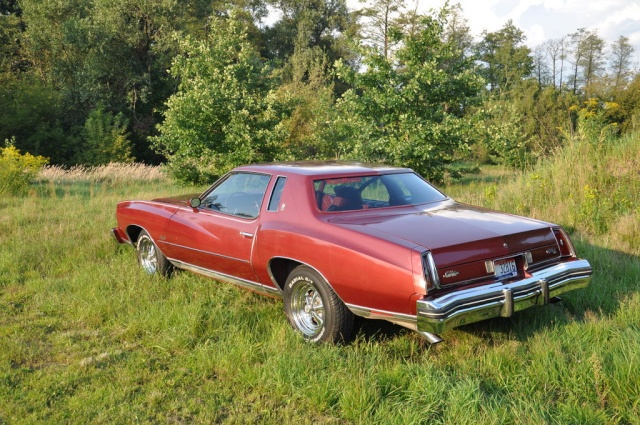 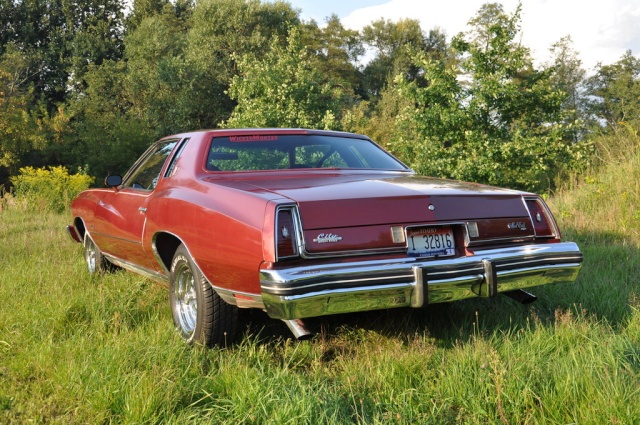 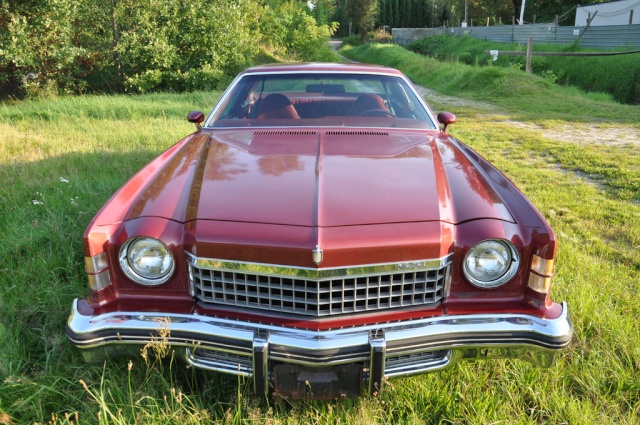 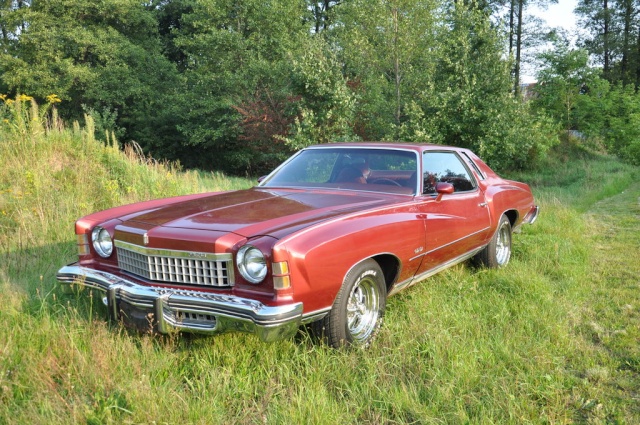 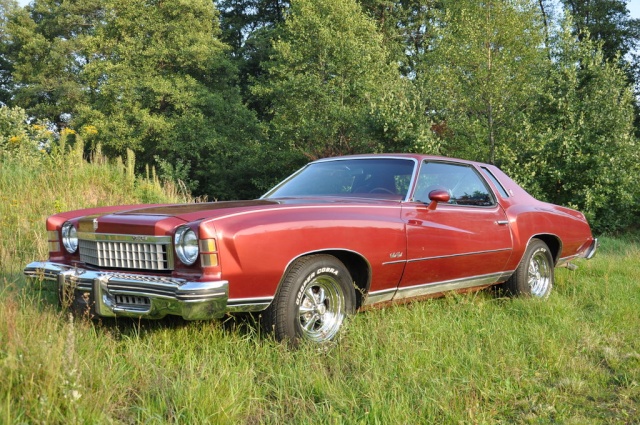 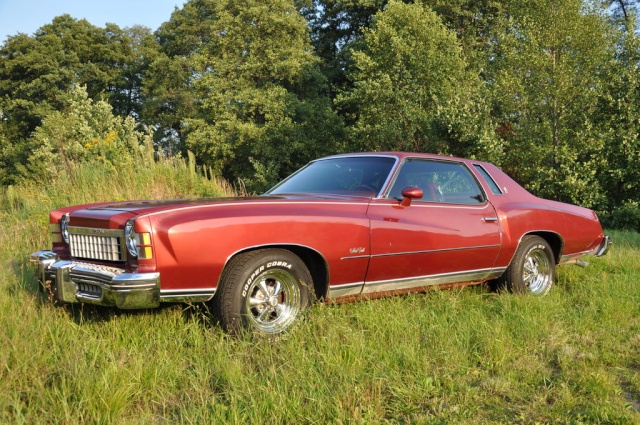 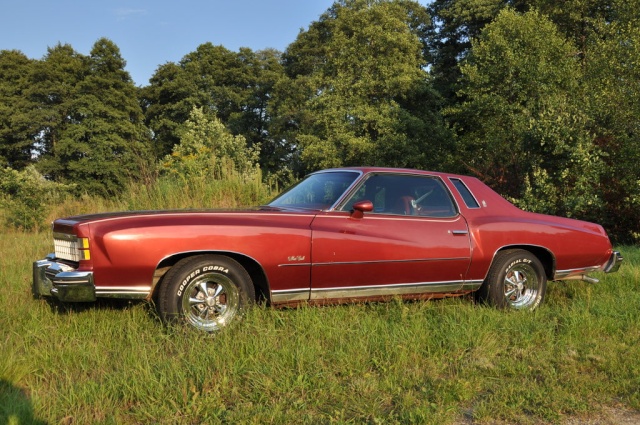 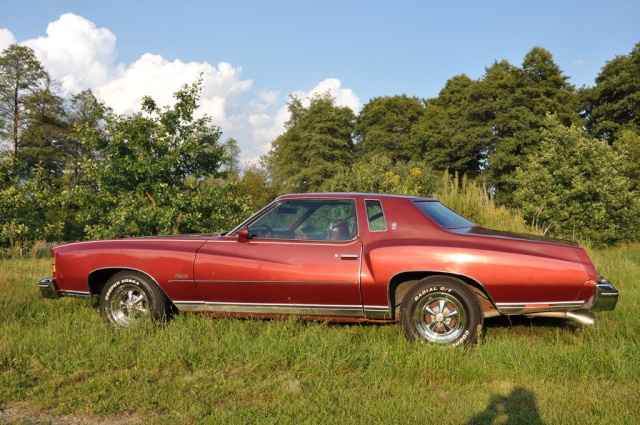 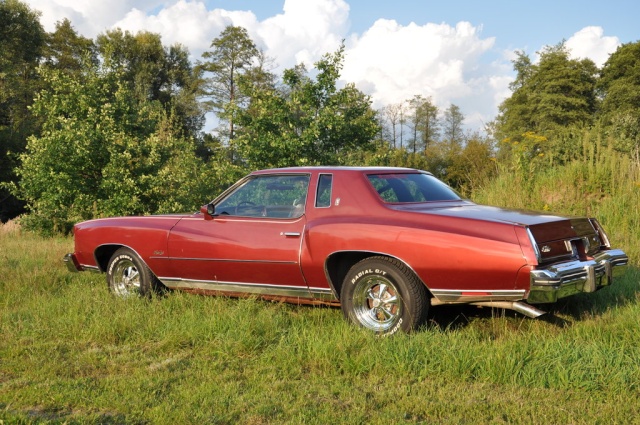 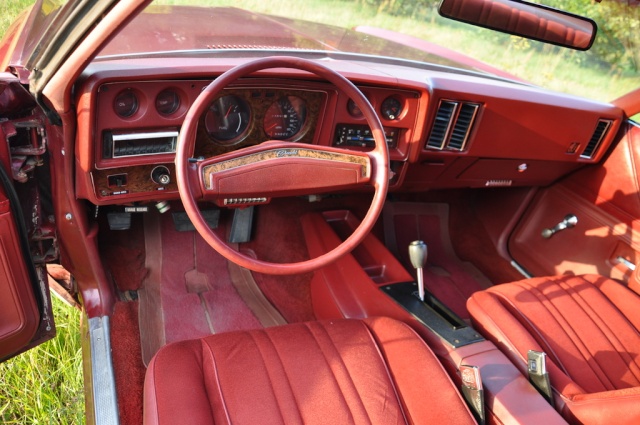 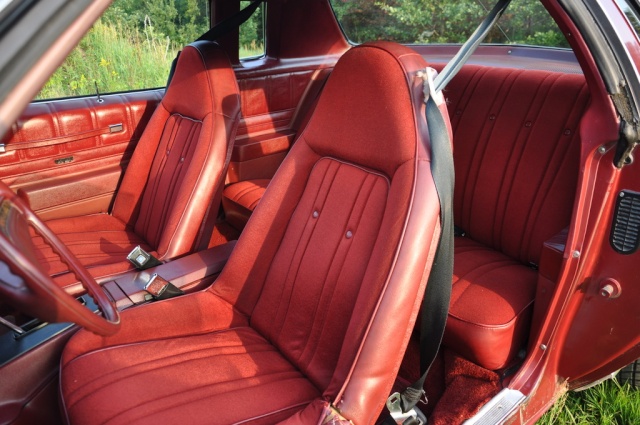 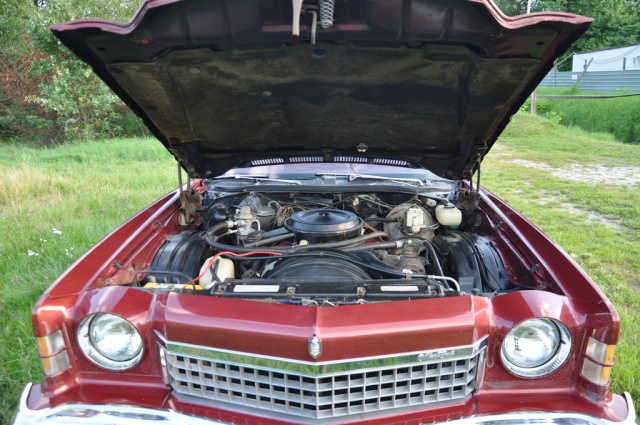 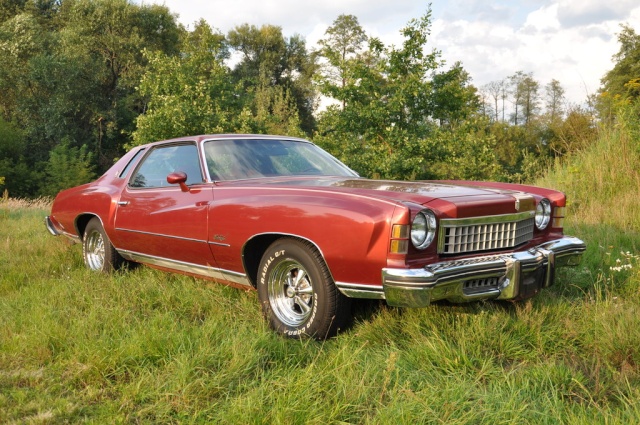 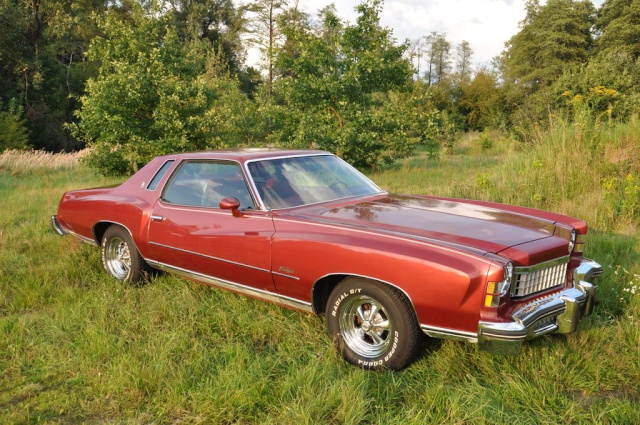 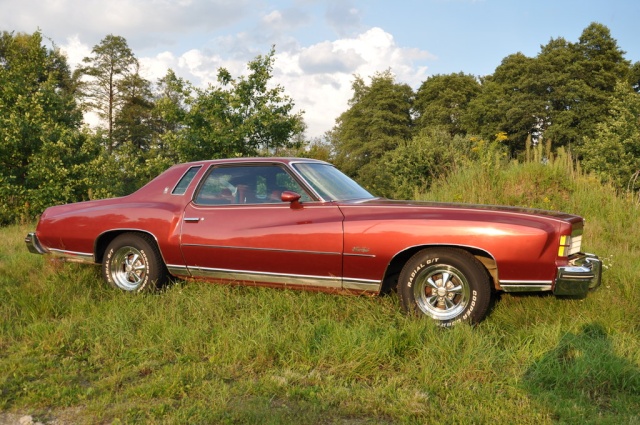 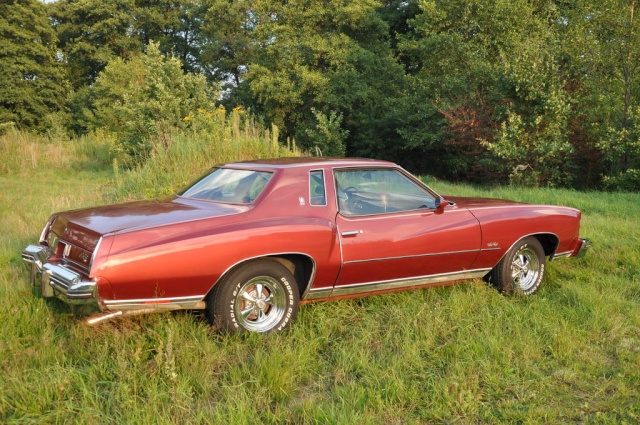 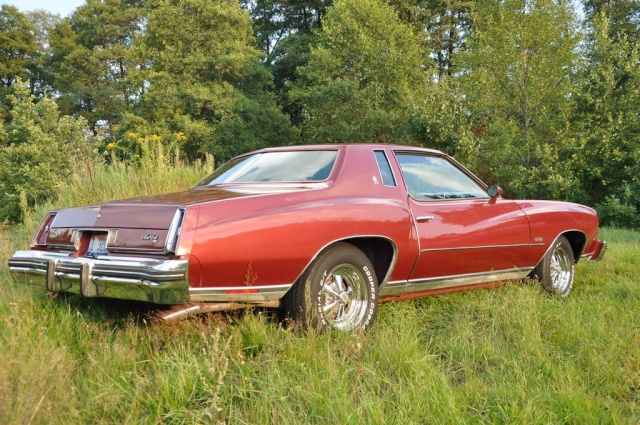 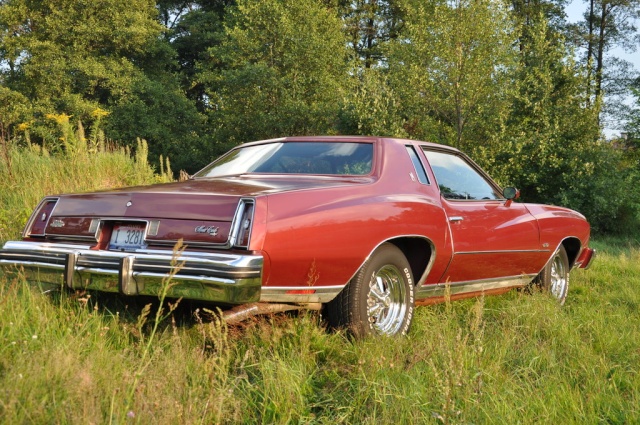 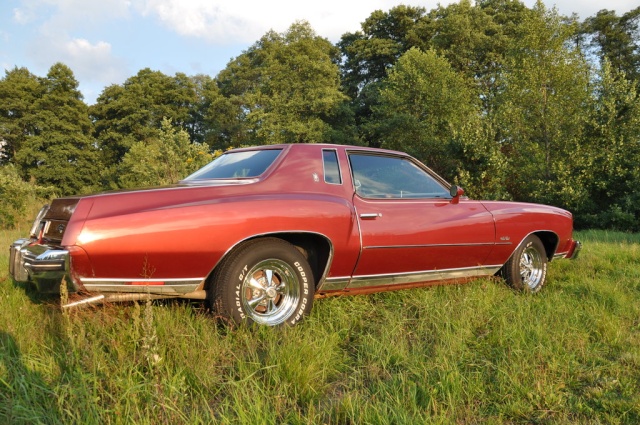 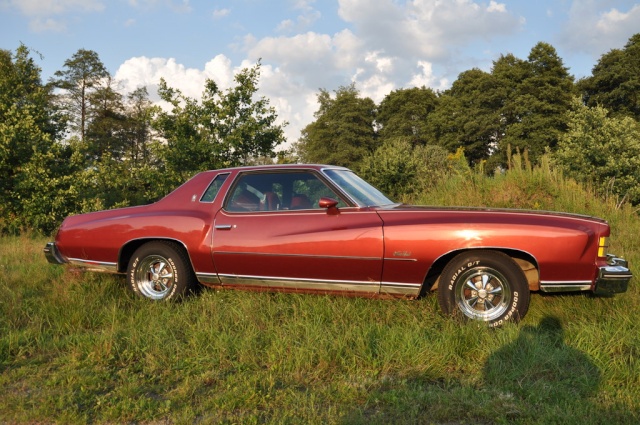 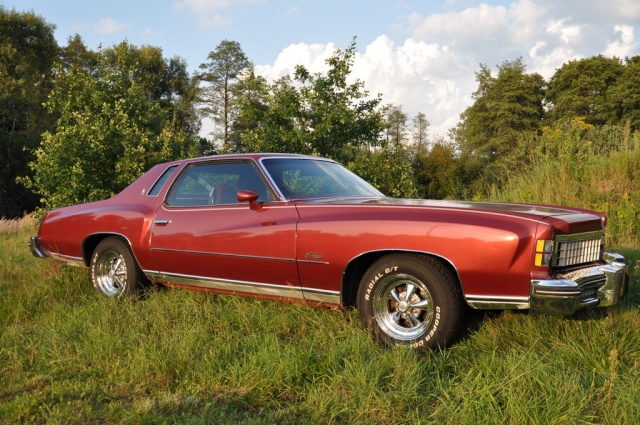 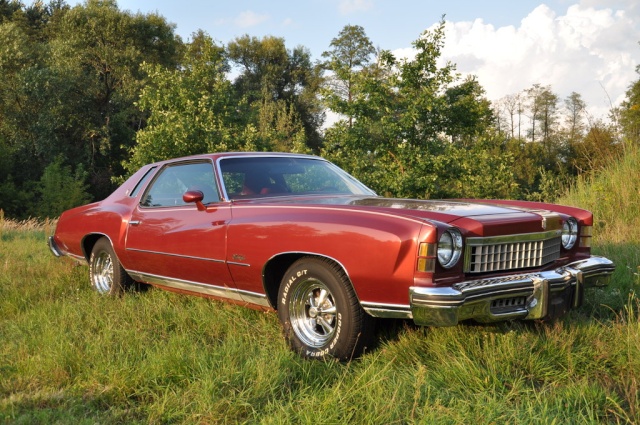 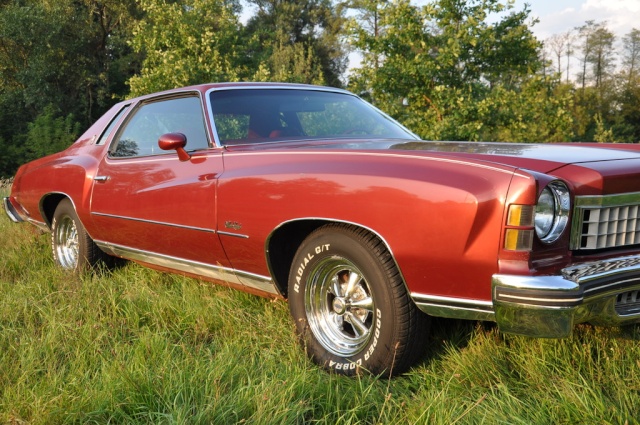 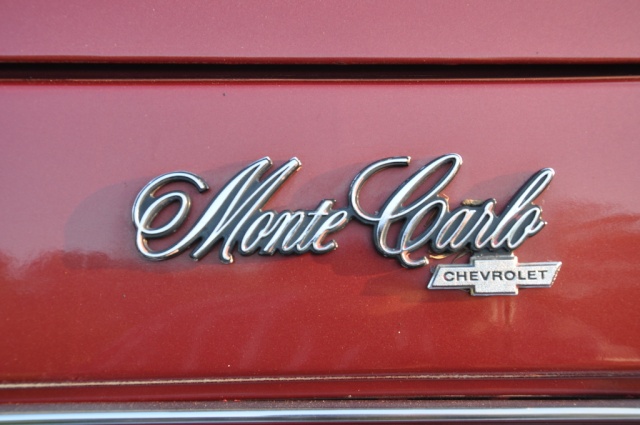 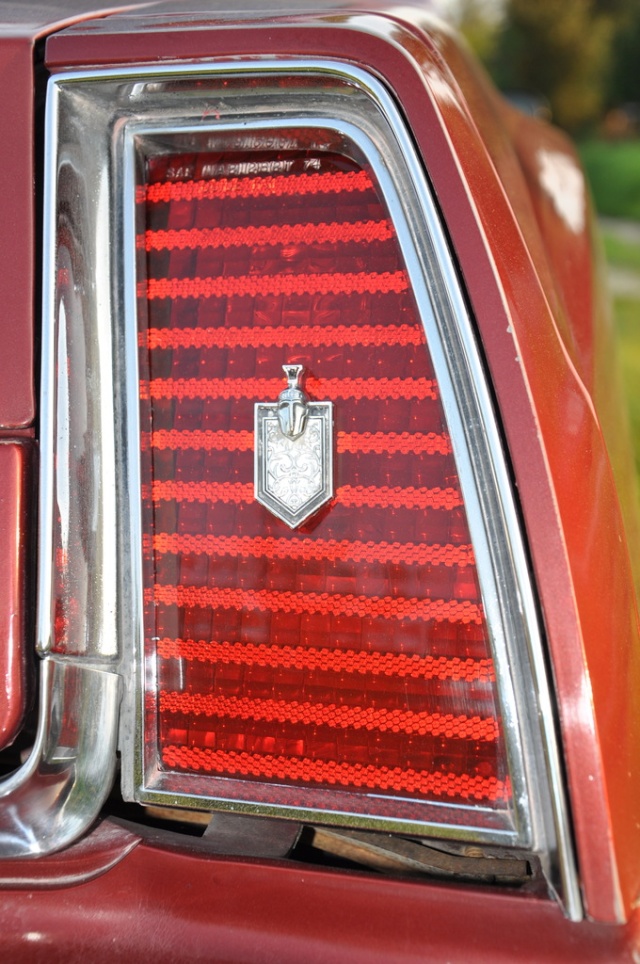 Is there any way to fix the forum software so it shows the complete picture? They are externally hosted, so I don't know what the problem is.

yogreasygramma wrote:Is there any way to fix the forum software so it shows the complete picture? They are externally hosted, so I don't know what the problem is.

EDIT I resized this time for you.

Mike,hate to hear this. really sucks I wish you the best !

Sorry to hear about your situation. I wouldn't want to make such a choice but w/ the rarity of that options combo you may be able to get the most $$ out of it. Good luck in either case and I hope your situation changes for the better soon.

mike
all these pics,and NOT one of the power moon roof. makes me wonder if there really is a hole in that roof.......

BTW-when did you sell the yellow 73? I think i remember somethinng about $8,000 and you would of break even,but i cant remember.

do you have any pics of the 3 of them together????

Hey guys! Thanks for the comments and wishes. I hope to be able to find another job soon but I guess if I have to sell one of them, I hope it's the white one because it should bring money with its new engine, etc. The red one is unrestored and probably wouldn't bring that much dough for its rarity, especially in Poland.

Chris, unfortunately I never got all 3 Montes in the same place together because I never had a garage that big. The most I have is different variations of 2 of them together - the red and yellow one, the white and yellow one, etc but not all 3 together. Now I regret I never did that, like Drix has a picture of all 3 of his together. Yes, I sold the yellow one a year ago for almost $10 grand, but I didn't make any money on it because of the $4000 shipping charge and other customs duties, registration, etc.

Anthony, thanks for the support. You know at this point I really wish things had gone differently with the van and I certainly could use the $20 grand that that bitch thief stole from me. And my parts!!

Chris, here are some more pics showing the hole in the roof. However, believe it or not, I've never had the roof open because the switch broke right before the previous owner sent it to me, and I haven't been able to repair the switch. I guess I should ante up the $100 that Phil wants for a new switch. I absolutely love the sunroofs on these cars and that is really making me want to keep this car and sell my beloved 73 hot rod.

Aye, Mike ... very sorry you are having to sell. Thoughts/prayers en route.....

The good news is that nobody has bought this car yet!!!

But the bad news is that I need money more than ever now and nobody has bought any other car of mine either. I'm scraping by as an underpaid English school teacher but can't afford the gas to drive any of these cars.... LOL. In any case, there's a car magazine over here that is about to do a 6-page spread of this red Monte and that kind of excites me. I've never sought any kind of fame or glory in the press, but they sought me out and want to showcase me car. So be it. It will only help the recognition factor over here and I am very glad to help out there. Like a G3GM ambassador.

I'll let you all know when it's ready. And I still hope I get to keep this car forever.

i had the same feeling when i was in CarCraft

Contrats! Will the article be online or just in print?

Congrats!.. That's cool. Any kind of coverage is good for all of us.

Thanks for the kind words. The article might be online, and if so, I will naturally post a link, so all you who speak Polish will be able to read it.

It will be cool to see what they actually say, and which pictures they print. I gave them all the factory literature (save the owner's manual and repair manuals) I have, so they will almost certainly use some of that too.

Sounds great Mike,I would certainly like to have a copy, maybe I can find it here,there are a lot of Polish people from "the other side" around here maybe someone can hook me up,I know one guy, he is a car enthusiast he might be able to get it.

Congrats Mike! Thats really cool. Google Chrome has a translate feature, I'm sure we can figure it out, lol.