Okay...so, we got the "new" Project Laguna running last night without too much trouble. Exhaust is a rattling mess and needs to be replaced before driving it, but I think it's roadworthy as is. Since we'd like to have some fun with it this summer before really getting into restoring it, my question is...are there any pitfalls regarding engine performance or possible engine damage if I remove and eliminate the cat convertor when replacing the exhaust? Want to run without a cat anyway...just not sure if considerations have to be made regarding the engine. As far as I can tell, the engine is a stock 350-2bbl. 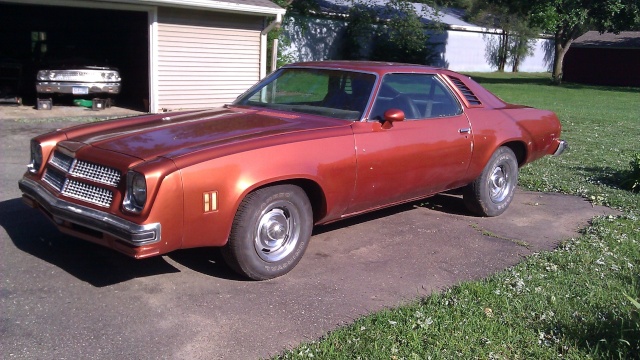 Yeah get that freakin thing off of there! Probably clogged any how. Get a exhaust shop to make you a pipe or spend the dough and get them to make you a dual exhaust. A good exhaust guy can just make you a "test pipe" . Is that a 62 Furd in your garage back behind the Laguna?

That's my son-in-law's '63 Fairlane 2-dr post. He wants to make an old-school Gasser out of it!

Sell it @ the scrap yard- there's platinum in there...people steal them off cars. LOL.

Don't know about MN but here in MA- you're "emissions exempt" after the car is 15 years old, so unless a car is burning oil real bad- no worries @ the inspection station. Good luck man, she's a beaut!

That Laguna looks pretty good to me. Removing the converter wont change anything except performance and gas mileage, like making both better

I had a '63 Fairlane 2-door years ago. It had the first version of Furd's small block, a 221 cubic inch little engine. Even with the Fordomatic 2-speed trans, it was quite zippy. Front springs had a problem though, 'cause they wouldn't stay seated in the A-frames like they should (?)

That is strange about the springs on your old Fairlane. Those things usually sit pretty tight in there. I've got an old school spring compressor for these NOT that inserts down the middle of the spring (shock removed, of course) and you compress it by pulling it up against the top underside of the shock tower.

I took mine off, gained a noticeable amount of power, and mileage went up.

I'll eventually put a cat back on it, but not the factory cat it's still good but the pellet style is such a power-suck that its not really worth keeping.

Here in MN, we don't have Emissions Testing anymore...so, I don't really have to worry about removing it. Yeah, there's a statement on the title asking that you reveal whether you've altered it when you sell it...but, usually it's a (wink-wink) agreement between buyer and seller to just let it go.

Remember the time my dad bought a new '75 Olds and was so pissed with the new cat requirements that he unscrewed the plug and drained the pellets.

Everyone takes them out and you'll get better performance and mileage like stated above. Or to be technically legal, you can just pick up a performance cat from summit or jegs. The cats nowadays are way better than the original ones that came out in 75. And its a violation of Federal law to drive around without one if your vehicle originally came equipped with one.

Not that anyone cares but technically its a violation of Federal Law to remove any item from a vehicle that would affect emissions. But who's checking? Your normal state "safety" inspection guys arent, they dont have the time or knowledge to know how every car came equipped.

The only guys who could really pose a problem are the U.S. EPA guys. They check everything on the roads, truck stops or factories, etc. that have emissions coming out of them. Since they have jurisdiction everywhere, they can stop anyone and take a look.

A buddy of mine failed his safety emissions in North Caroline for no cat. They guy told him to put it back in. So he bought a new one, dumped the pellets and passed inspection.

Nobody really is looking at cars with no cats.

Quick- someone delete Joe's post before the EPA get's ahold of it...it's only a matter of time before thay have inspectors come to your house and perform a sobriety test on old cars & hot rods/customs.

LOL. Just stuff from my training. And stuff no one really cares about. LOL