This looks pretty cool.  He also found a way around dash board repair / replacement.

I have a pic of that car. I like the dash it's very well done.

Interesting, I like the look with the slicks on it.

It's tough to draw the line between street car / race car and do it well.
It's a compromise for either one.

It's very well done. I'm all for a NASCAR-style tribute, but if you're going to drive it on the street, you have to make some concessions for that. Besides the fact that sideview mirrors would be handy, the lack of inner fender wells will allow those nice fat tires to pick up everything on the road and fling it around the engine bay -- gravel, dirt, water, leaves, trash and maybe even the occasional pile of squashed varmint guts.

heres another video of the same car.

That is awesome. I love those yellow letter Goodyears on the steel wheels, and I bet they do fling some stuff, but then again they don't look street legal. But I guess Bfg's would fling even more stuff.
.
I like the dash but I think he should have built the cage to the firewall and then the dash over that, swing out door bars would be nice too. And why keep that key in the column anyways, put that on the dash too, along with the fuse panel cut right into place. And a back seat with a cage shoulder spreader? I love that car, but I say finish it and gut that sucker. Those seats suck anyways.

Anyone have any more pics of this other than the vids. I can't watch them here. 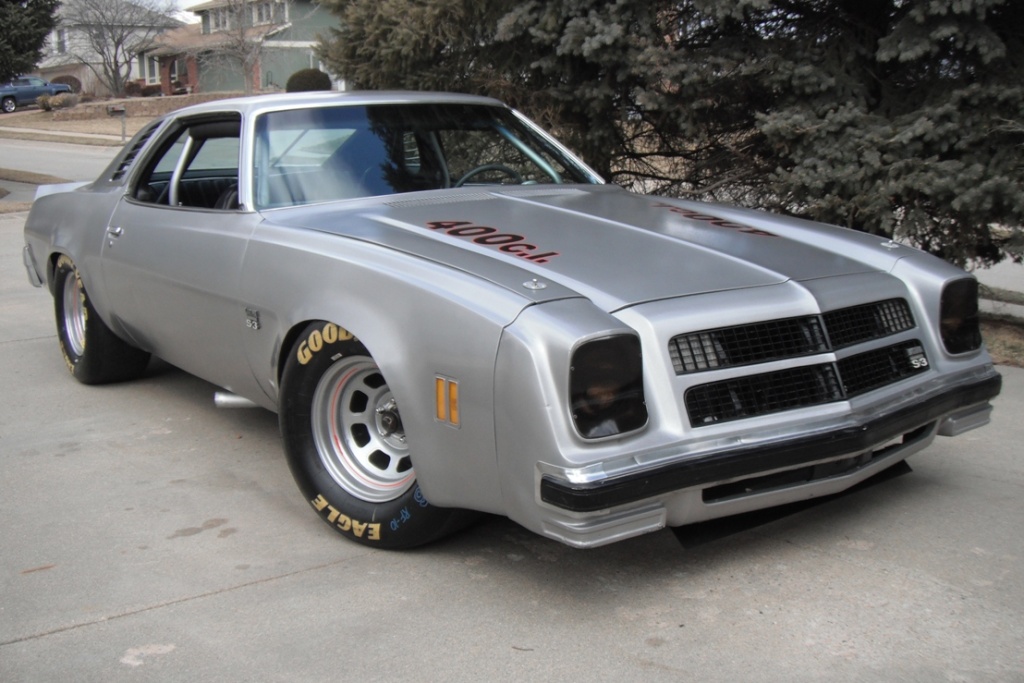 Love it. Wonder how it drives?

I just noticed it has a big block.  The air cleaner says 454, even though the hood is prominently marked 400 ci.  Must have had a engine change since it was painted as it really doesn't qualify as a sleeper. Lol.

If you notice also- the wheel wells are off no doubt because it looks as if he used the "Monter Garage" method of flaring the fenders to get them big @$$ tires to work in there.

It has 2 sets of tires and wheels. The slicks and the bfgs. They get swapped out from time to time just for fun on the street. I've never had any problems from local law enforcement. lol. As for the "monster garage" method of flaring the fenders...They aren't flared at all actually. It's just the way the stock fenders bubble out. I just used a angle grinder to slowly radius the fenders until the tires no longer rubbed. They're very close but they never rub because the front suspension only has about an inch of travel. And the way the camber is set, the tires actually tuck inwards into the fenders as the front end bounces, even when they're all the way turned. It's the same thing a lot of the teams did for racing them as stock cars back in the 70's. And yes, it does no longer have the factory wheel wells. However it does have wheel wells that I fabricated to fit the tires. So I actually have no problems with road debris and such. The "400 c.i." refers to the factory small blocks that came in many of the Lagunas. I wasn't trying to make it a sleeper by any means. lol It is interesting though to hear people when they see the hood before I open it. It drives like a race car for sure though. Very tight and stiff. lol And for a 4000lb car I can't complain about the handling. It is tricky trying to find the line between a street car and race car. How far is too far? I do like having a backseat and interior though. And it does get used from time to time by my 5 year old son. I've done some decent upgrades recently such as rear disc brakes and fiberglass doors and am hoping to have another video soon. Love seeing all the different g3 builds on here. Till next time....

Hey oldschool454, welcome to the forum...there was a lot of positive for feedback about your car when you be video was posted.  You should introduce yourself formally.  John m.

X2 & you should post more pics if you have them. The car has a really cool look. I had it as a desktop screen saver

Definitely. Would love to see more of it!

Thanks all for the positive feedback. My name is Patrick out of Omaha Ne. Both my dad and I have 76 Lagunas. I grew up riding in his and he eventually helped me find this one as a daily driver when I was just out of highschool. So, many of the things I had done to it were done when I was still driving it on a daily basis, even through a couple winters. Such as the roll cage and dash. lol I'll put up a little backstory on it and some more pics, new and old. This is my first time on a forum so I'm anxious to see what other people are building too.

I originally purchased my '77 Malibu Classic about 6 years ago. It was intended to replace my first car, a 1984 Monte Carlo equipped with a 350 crate engine that my dad and I had installed just prior to the car being stolen and stripped. My dad is also owner of a '76 Laguna. A few weeks after losing the car that I had poured so much effort into he decided to call his friend and fellow Laguna nut to see if he might have a new project for me. We made the 8 hour road trip to Herman, Minnesota to check out the potential iron. I had been told that he had three different cars to choose from: a '75 and '76 Lagunas that were rough but complete and '77 Malibu Classic that also needed some work but in much better shape than the Lagunas. The Malibu’s engine was a low mileage 305 145HP 2 bbl; the Lagunas were both 400 small block cars. After arriving and taking a look at what we were dealing with I decided the Malibu would be the best option. It appeared to be the best daily driver candidate for the next couple of years or at least until a new "beater" came along. The $1400 price tag included all of the parts necessary to convert the Malibu into a Laguna S3 clone including the Winston Cup slope nose, window louvers, tail lights, valance panel, and correct S3 badges. The car had been sitting in a barn for several years so we changed the oil, filled the tank with fresh go-juice and after a final inspection we hit the road. The car was completely original and was A/C and cruise control equipped. A/C was not functional but the cruise control gladly worked, making the 8 hour drive home a smooth cruise.
My original plan was a stock car themed hot rod and, being young and carefree, opted for a heater-delete option which translated to ripping out the A/C and heating components. Even so, I elected to keep the cruise control. It is still functional and does not detract from the race car theme. After a few years of daily driving the Malibu to work every day I got a deal from my brother on a "new" daily driver and was soon seriously on my way to the car I had envisioned. I had purchased a 454 on the pay-as-you-go plan that needed rebuilding. Seeing my dad’s Laguna and growing up riding in it left me feeling inspired. One piece at a time the silver Malibu began to look more like the car I had envisioned. I have done all of the work myself with the exception of the engine machine work and welding the 10-point roll cage. The ride stance was lowered for the NASCAR look. Cutting the front fender lips and removing the front inner wheel wells was necessary for tire clearance (I recently fabbed new inner fender wells for more streetability). A fuel cell, fabricated rear spoiler and Bassett wheels added to the desired look. The roll cage was purchased as a kit and modified to fit the S3 interior. Welding tasks were turned over to my friends at All Pro Exhaust Shop. I fabricated the aluminum dash to fit the interior and give it more of the stock car vibe. Both doors, fenders, and trunk lid were replaced and I taught myself how to install new quarter panels with some helpful tips from PHR articles. Later on the doors were replaced yet again with fiberglass weight doors to remove about 180 lbs. Scratch-built headlight covers and rear window retaining straps add to the 200-mph look.
I have been blessed with the support and help from family and friends. Special thanks to my wife Kumiko and my dad for their help and support. Future plans call for fiberglass hood and front clip, ceramic coated headers and 200-4r transmission to mate with the existing 2.56 cogs. Is 190 mph at 4000 rpm feasible? Or maybe 98mph at 2000 rpm for the long cruise...Of course many safety upgrades will be put in place in due time before then. These are all long term goals as I have no plans getting rid of the car. Rear disc brakes were added recently to help stop the 4000lb beast and were taken directly off a third gen camaro with aluminum calipers with a built in e-brake.
I’ve grown to like these cars. Riding in my dads’ car and attending local car shows influenced my decisions. Lagunas seem to be few and far between around here and I like the like the rich racing heritage of these little known A-bodies. I wanted something just a bit different from the Camaros, Mustangs, and pre-1973 Chevelles and typical drag setups. Besides, who can deny the cool look of a car dropped on the pavement with huge gummy tires stuffed under the fenders. Maybe even a tribute lap or two someday will be in order. A dream come true. But for now, I’ll just continue one part at a time year by year making my vision a reality, and most importantly, just having fun!

Here's a crappy video I shot last year sometime I think. Since then the rear end has been yanked and converted to discs and painted so it looks slightly less brown underneath. lol 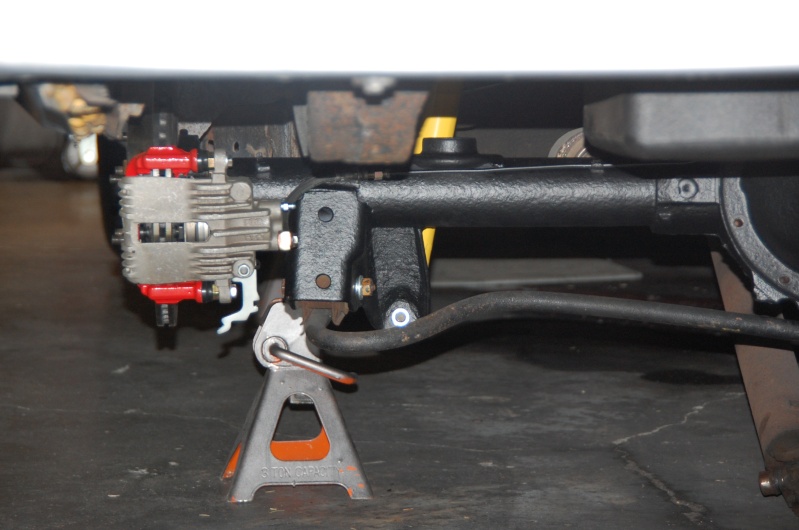 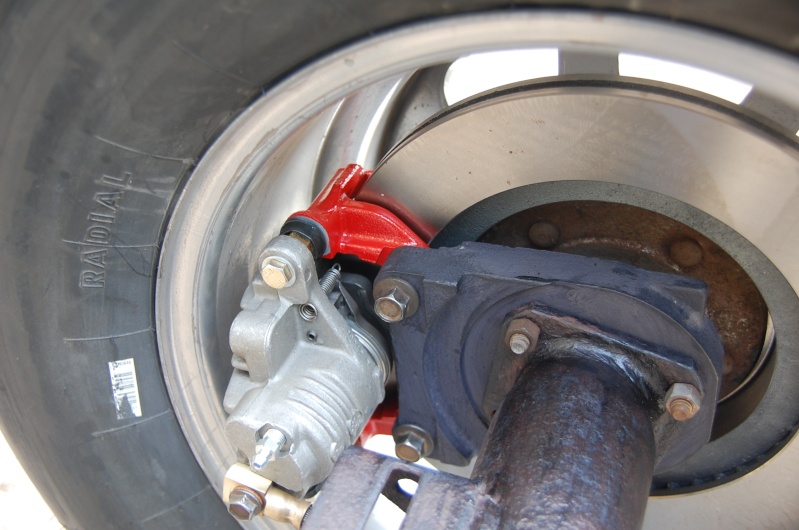 A couple years ago before the fiberglass doors. You can see the dent in the pass side. lol 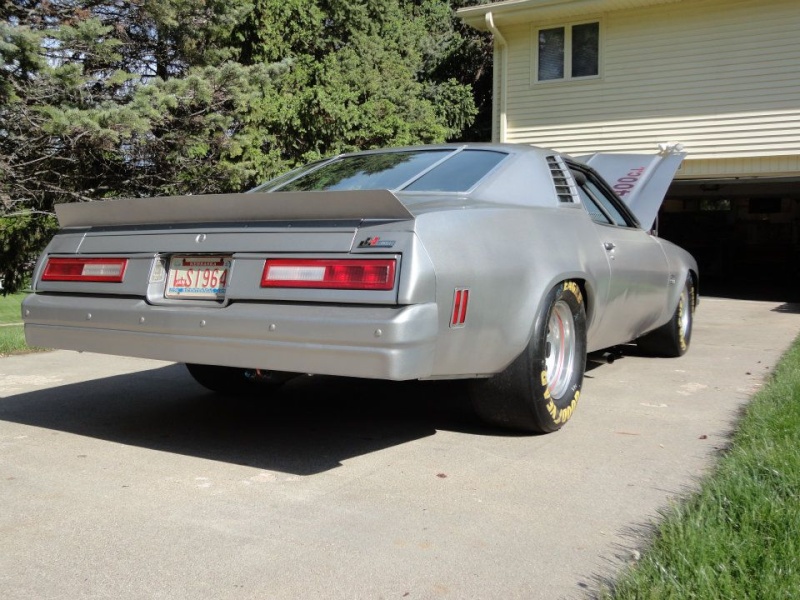 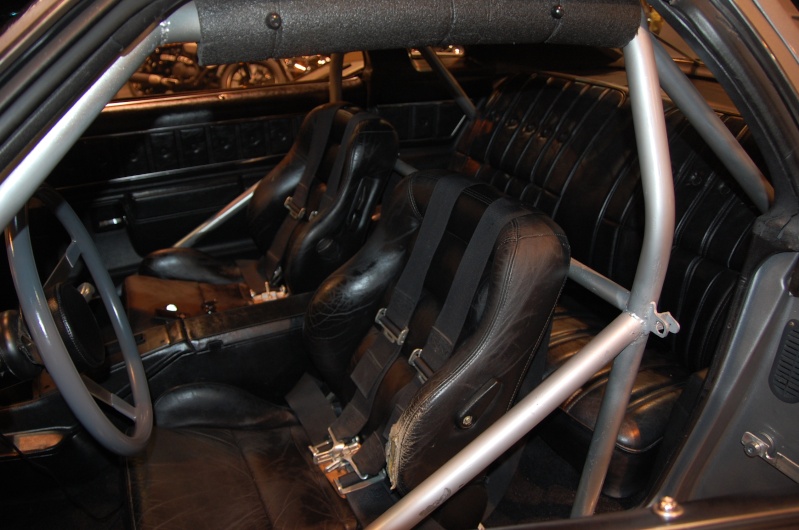 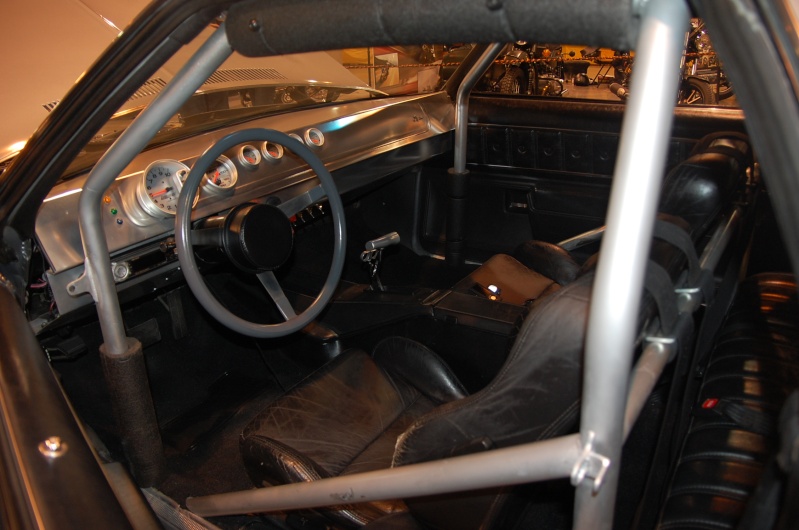 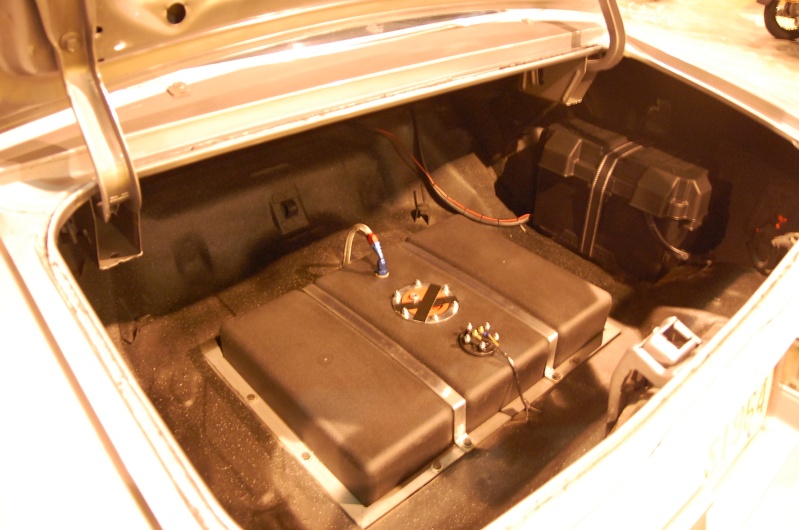 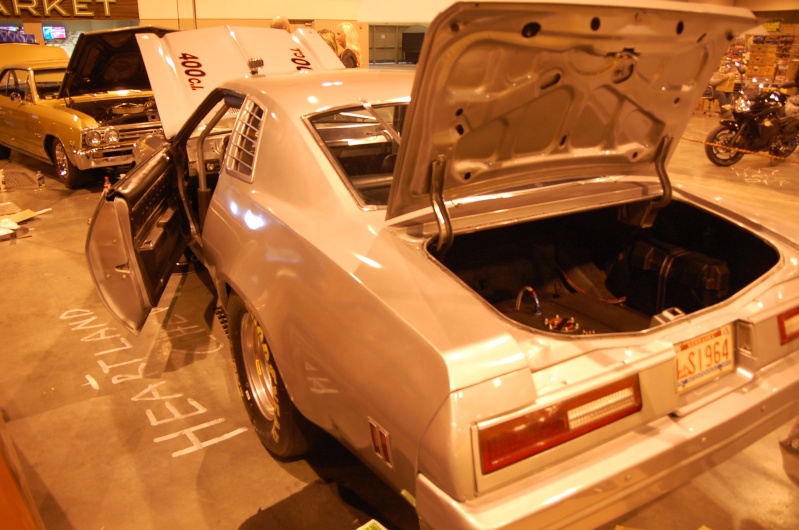