Anyways the trans works fine and is rebuildt and works as it should. But i see alot of highway and would kind of like the lockup to be working. Does anybody know how i should go about wiring it up? Im thinking something like a switch i can flick when i need the lockup on the highway.

But im curious. Im guessing it wires trough the contact on the side of the trans, but what pins do i use? And how?

Any info will be greatly appriciated.

I had this on my computer.

this would be where the harmess plugs into the tranny case near the shift arm link.

4 hole...... 12 volts in the outter front hole. a ground in the hole behind the front outter hole.

But type this into google "th350C lockup wiring"  You should find what you need.

You will need a switch and a light would help as well. Because when your locked up and you try to come to a stop, the engine will die.

Just what i needed. A million thanks you saved my day and my gas budget.

Anytime at all. Happy Holidays !!!!

Joe73 wrote:You will need a switch and a light would help as well.  Because when your locked up and you try to come to a stop, the engine will die.

You could also run it through the brake pedal switch (same as cruise control) so it cancels the lockup automatically for you when you hit the brakes. That's how the lockups were cancelled for the 200 and 700 trans; this unit was probably wired the same way from the factory.

Yea i was thinking maybe the same thing. But i read something about it at a website for camaros, a dude there had Wired his up with just a toggle switch and when he wanted to slow Down or stop, it unlocked the lockup by itself. Im going to wire it up for now just with the toogleswitch and see how things behave on the highway. And If it causes any problems i Might just rewire it over the brake.

Im pretty happy to have Found this site. There is always someone that knows the answer and is willing to share. Happy new year to all.

So im in the process of Wirering my lockup so i can enjoy it this summer. I am pretty much sure as how to do it.
But i was wondering, what If i by mistake wire it Wrong Say backwards. Will i hurt anything like Blow something in the tranny or burn anything? Or will it just not work right. Just in case i screw it up i really dont want my rebuildt tranny cooked or something.

If it's like the lockup on the 200 & 700, you have to try pretty hard to  screw it up.  It grounds through the transmission case, so there's only a positive wire to the transmission.  So your circuit would look something like:

The only questions would be where on the transmission the wire hooks up.  On the 200 & 700 there's a four-pin weather pack plug, but it has to go into a specific terminal.  The other terminals are  generally not used.

If you Google image search "TH350C lockup wiring" you'll get lots of diagrams, both simple and complex, depending on the goal.  There are some interesting variations, also, including one where you could wire in a vacuum switch to cut out the lockup when you stomp on it.

Yeah i know its hard to screw it up. But considering its me whoa nelly both can and will happen. Im pretty much into how i wire it, but i was just afraid i can burn the solonoid or something. My connection on the trans is a 3 wire plugin. I had some info earlier in the tread that and he Said i need to put a 12 volt wire in the front plug with at switch and a Ground in the rear plug. Then i can manually lockup on the highway.

But i was just wondering If i by mistake switch the wires and Ground the Wrong plug, i would hurt something or it just would not work at all.

I have Wired it now and nothing started to smoke or other stupid things when i flipped the switch. But since its winter here and Real bad weather, i cant test it before spring. Whe Shall see then If it works.

Thanks for your time. Regards henrik

Hs1973 wrote:But i was just wondering If i by mistake switch the wires and Ground the Wrong plug, i would hurt something or it just would not work at all.

I have Wired it now and nothing started to smoke or other stupid things when i flipped the switch. But since its winter here and Real bad weather, i cant test it before spring. Whe Shall see then If it works.

If the one terminal is indeed a ground and you plug the positive wire into it, the only thing that should happen when you flip the switch is that the 10A fuse in the fuse panel will blow, because you just gave it a direct path to ground with no resistance on it.  The solenoid will simply not do anything because no juice is passing through it.  A solenoid is a very simply device anyway -- if there's power running through the windings, the magnetic field is energized and it fires (or retracts) its plunger. When the power stops, the plunger resets due to an internal spring.  You really can't burn it out short of giving it the wrong voltage.

Also, at least with the 200, the lockup will not occur until you are in 2nd, 3rd, or 4th gear.  So Park, Neutral, 1st, and Reverse all will have no lockup if you flip the switch.  I would guess these are all for safety reasons and the 350C will likely follow a similar rule -- you probably won't be able to test it until you drive it.

Yeah, I saw that, and that one won't work as drawn. Assuming the green wire is connected to the IGN port (don't know what 'test' port is) on the fuse box, 12V will flow directly down the green wire to the trans and trigger the lockup circuit as long as the ignition is on.  The brake and vacuum switches will have no effect on lockup.

So this doesn't work: 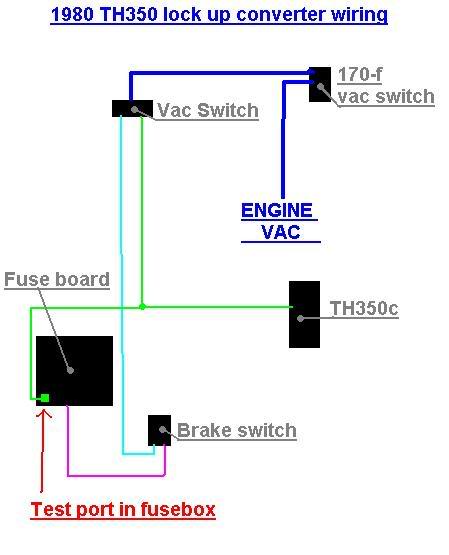 But this will (technically): 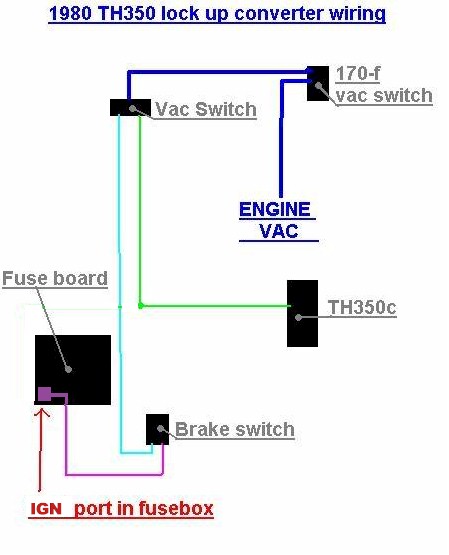 In this arrangement, the current passes through both switches, and it is always on until one of the two switches cancels it.  Not knowing how the trans will behave if this circuit is always energized, I would still add the manual switch in that line somewhere so that the circuit was only on when I wanted it to be, then the other two act as fail-safes.

FWIW, I would be sure to wire in at least the brake switch.  Sooner or later you're going to encounter a situation where to you have to hammer the brakes when some other driver does something stupid, and you're not going to remember (or have time) to flip the manual switch off.  You lock up the brakes with the trans lockup on, and you run the risk of having the engine die and losing your power brakes right when you need them.  I don't know if the trans will be smart enough on its own to cancel the lockup for you in that situation.

Ok i Might rewire it ajust because i would actually like If using the brakes unlockes the lockup. But some guy in a camaroforum, Said that he has only Wired in a toogleswitch and when he applies his brakes the trans jumpes out of lockup by itself. I have never tried to run with a lockup trans in my hotrods before, only in my modern Dayli driver. So i dont know If he is right or whats up.
Anyways im going to try a testrun and see how it behaves. And If the trans dont unlock by itself, im probely going to rewire according to the diagram you was kind anough to provide.
But since its hard winter here its a couple of months away before i can drive it again.