Just thought I'd share something I thought was pretty cool.

I've been looking around at New York State license plates used in the 1973 model year.  I come to find out that in 1973, New York changed to the yellow plate with blue lettering.  I also found out that in 1973 the dyes used to stamp the letters were slightly larger and thicker than the dyes used for the numbers.  1973 was the first year for this style plate.

In 1965 my grandfather bought a brand new 1965 Chevy Nova 4 door with a 230 ci.  six cylinder.  It had power steering but manual brakes.  When purchased, that car was issued the NY black "WORLDS FAIR" license plates.

Before my grandmother passed away, she gave me one of those plates since it had been lying around, so I have one from the Nova.  She did not know where the second plate was at the time.  I learned to drive in that box nova and I even took my road test in it.

So, I was mentioning what I have found to my uncle.  My uncle currently owns the house that my grandparents built back in the 50s.  A few days later, my uncle comes by and hands me (2) license plates.  I immediately recognized them from my grandfathers car.  They are the plates NY sent to my grandfather when the plate change occurred in 1973.

So now I have not only the period correct 1973 New York State license plates for my 73 chevelle but actual plates that have been in the family since then.

Here's some pics of the info about 1973 plates and a pic of the plates I now own.  I covered up one digit, I always cover up all plate numbers when posting because I know what happens when your pic shows your plate number on the internet.  Just a fact of my line of work. 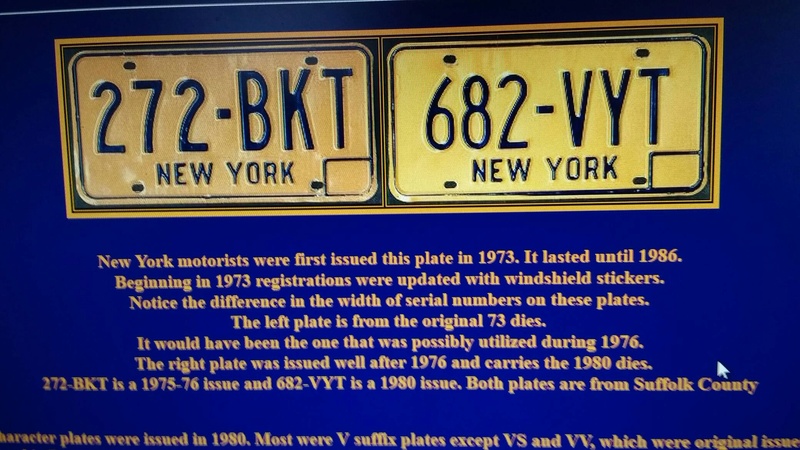 That's so cool Joe. I'm not sure how it's done there in NY, but here in Minnesota you can re-register old plates back on your car. Not all, but most you can. It would be cool to have a 73 plate registered on your car wouldn't it.

My Dad had a large collection of old plates, going back to the early 1900s. Way back then, not that many cars, and many plates were bigger than now, and many were steel with porcelein (SP) covering.
Reason I remembered this was your mention of the NY Worlds Fair. He had a plate from the 1939 NY Worlds Fair !

Some guy came along and bought his collection, in the 80s....

Joe, I have a 57 worlds fair plate and a few of my grandfathers blue NY plates with the registraton for late 72 using the little stickers. Pictures of my dads new 73 Cutlass show the Yellow plate like in the top picture. Another License plate artifact I have is a dealer plate frame from a dealer in The Bronx that is much bigger than a current plate,must be from the late 30s early 40s.

Cool stuff. I will be transferring these 73 plates to my car. Pretty some process here in New York.

I was told all you had to do was get a personalized plate with that number then put those in instead. Guy at DMV told me that. If you go to the one in carmel talk to that guy with the beard and toy Pontiacs on his desk. Hes got an old Lemans and hes a nice guy.

I looked it up online. You have to fill out a form and submit it with a photocopy of both plates. They have to be in the correct format of the year of the vehicle. And they can't be touched up with paint or anything. Guess that's why they want the photo copy of them. Pretty simple process.

That's cool Joe. I wish I could have a 73 plate with my personalized lettering on it.

Joe73 wrote:I looked it up online.  You have to fill out a form and submit it with a photocopy of both plates.  They have to be in the correct format of the year of the vehicle.   And they can't be touched up with paint or anything.  Guess that's why they want the photo copy of them.  Pretty simple  process.

There is a company that sctually restamps old plates. So if you have a personalized plate you can get it done to look like a year of mfg.plate. Dont know if its legal though.

Yesterday at 2:52 pm by fasrnur