The extra harness for pulse wipers has a single clip that looks like it should go to the fuse box? It seems to be designed so that something could clip into it if needed. This harness is not one our stock diagrams. Could anyone who has pulse wipers tell me where it should go? (75 El Camino).

Plugs into one of the vertical row of contacts in the exact center of the fuse box.

Another question--what size wire for the oil pressure gauge and tach wiring? Looks like most of the stock wiring is 14 or 16? 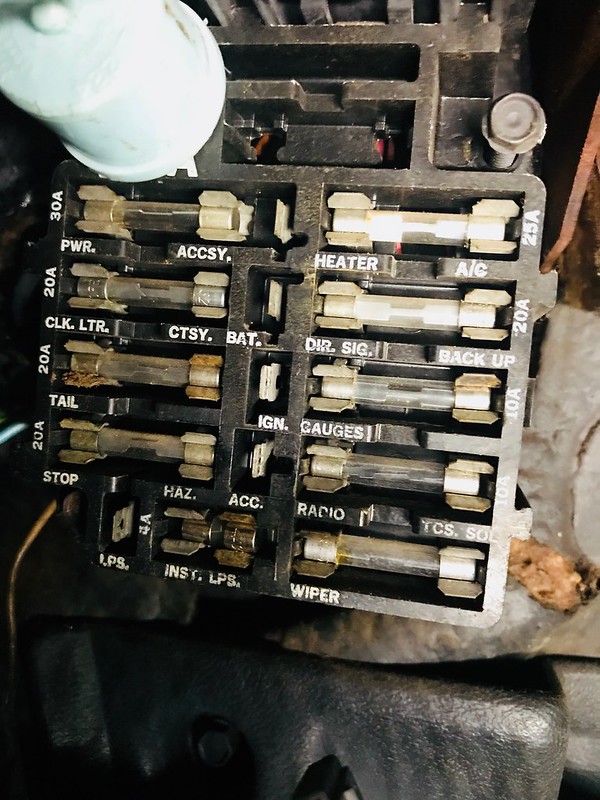 Switched power when the key is in 'accessory' mode.

That port is not hooked to anything (at least in my 73 diagrams), so it's dead. Likely was added during design against a future need.

crice63 wrote:Another question--what size wire for the oil pressure gauge and tach wiring? Looks like most of the stock wiring is 14 or 16?

Oil pressure only needs 18.  The stock tach needed 18, though aftermarket ones usually need 16.

Thanks, Thatfnthing (love that name, I use it almost daily). For some reason this electrical just wants to appear complicated. I'm trying to just do one circuit at a time but they inevitably get tangled together conceptually.

Happy to help. Electrical is always easier taken one circuit at a time. I rewired the entire car that way. And take copious notes to prevent head-scratching a year or two down the road when you have to revisit something.

What's your thoughts on adding fuse tappers? I was thinking of installing one on the gauge fuse to hook my aftermarket gauges to. The only gauges running on the fuse are the speedometer and tach. I didn't think added the added load would be too much for it.

Fuse tapping is fine (though I'm personally not a fan of how they look), as long as you keep in mind a) the draw of the device you want to add, and b) the capacity of the circuit you're tapping.  The circuit was designed by the factory to power the things on that circuit and leave a little (but not a lot) extra margin.

For example, if a fuse is rated at 10A on a circuit, the factory expectation was that all the things that circuit powers would add to less than 10A total (and actually should not even come near that), and the feed wires are sized accordingly.  That's the important part -- if you simply put in a larger fuse, you will allow the device to pull more juice, but the wires will overheat trying to carry the extra load, which can start a fire.

The existing taps (BAT, IGN, and ACC) are designed, however, with a little extra room.  BAT is covered by the 20A courtesy lamp fuse, IGN is on the 20A directional fuse, and ACC is on the 10A radio fuse.  So if you can make use of these, they're a good place to start before tapping any other fuse.

Gauges generally don't draw much, so I would either a) hook them to the IGN port, or b) splice them directly to circuit 39 (PNK/BLK wire), which now should have capacity available if the factory gauges are no longer in use.   Option A is easier, option B looks better.

Thanks. I'd rather have a cleaner look as well. I will probably try and add another circuit for additional connections. I did ask you this question before so I won't make you repeat your thoughts on that