Well we got the project home. Did inventory after we got it here. It is a basket case but has some good stuff. Found out it had 1995 Impala drive line swapped out when the guy I got it from bought bit. He sold the LT1 and tranny with PCM. then bought a 1974 El camino with a 396 Th 350 for it. He just set the engine in the bay with one motor mount bolt. It made from IL to MN that way ok.
[img] 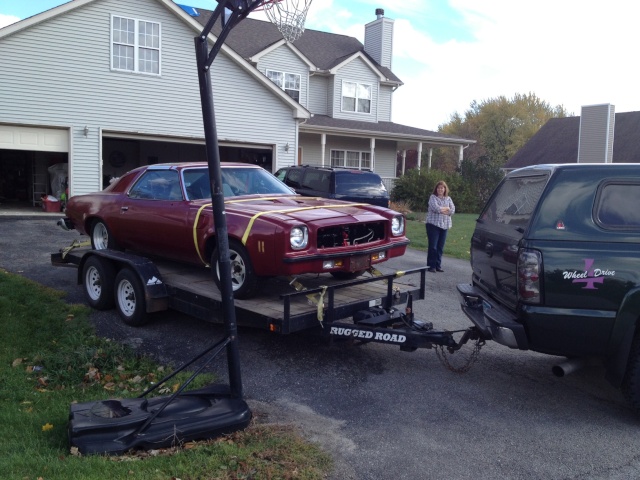 Here it is going trough inventory 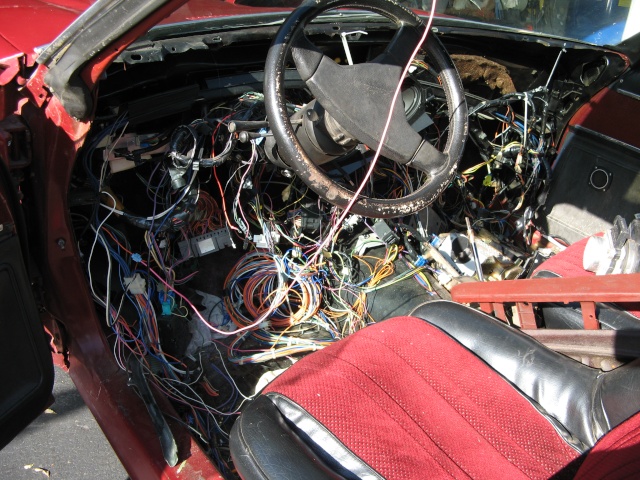 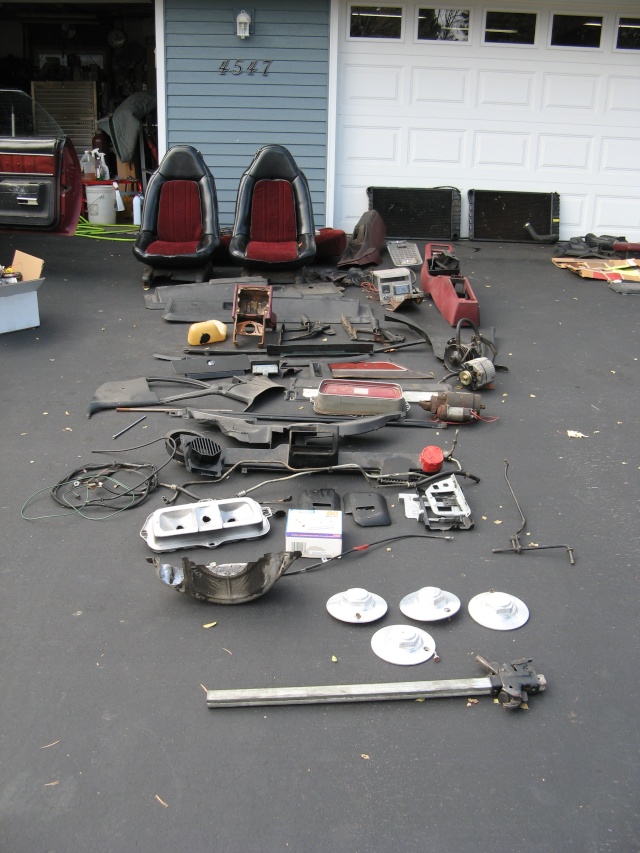 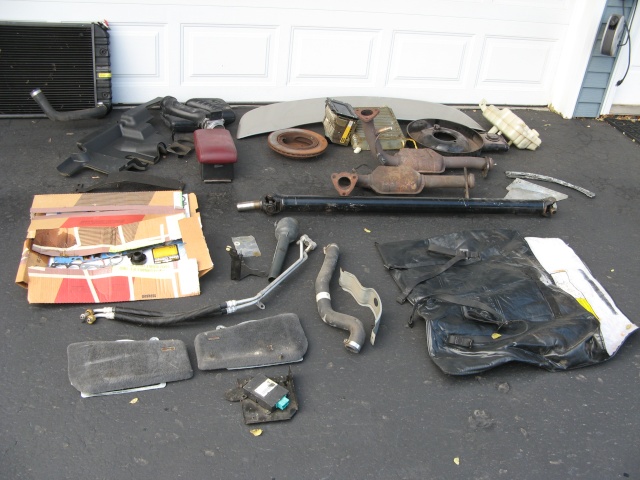 Just now removing the wire nightmare mess as he had the full harness from the 1995 Impala, and a full harness from a 1987 Buick that someone was tiring to install the digital stuff from that also. Plus I found parts of the stock harness. 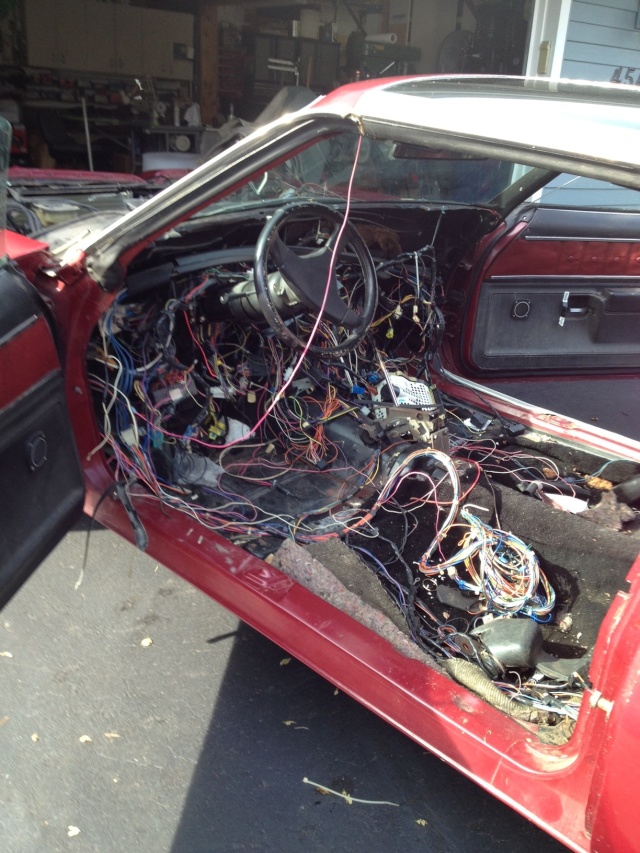 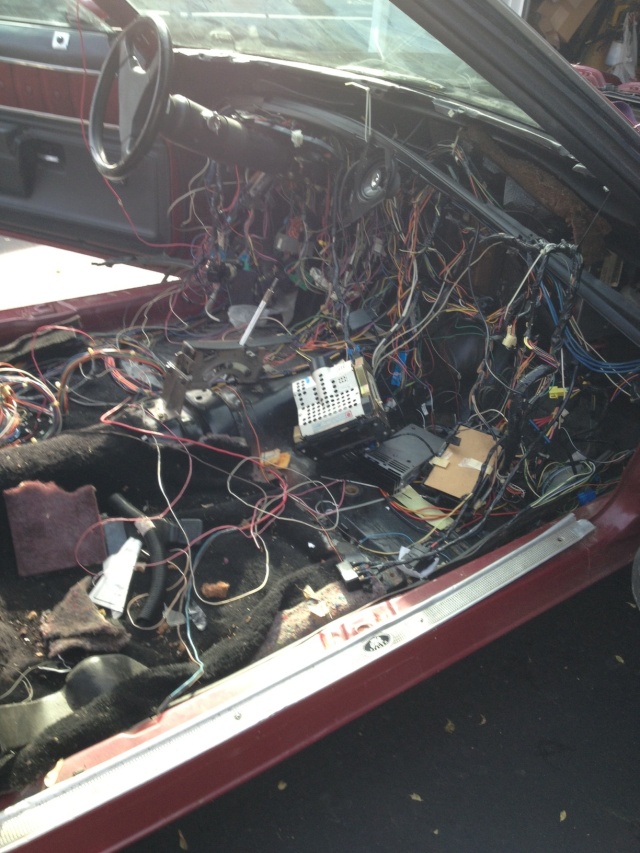 Removed every thing for wiring and engine bay as of now. Have the 396 out and will be selling it as I picked up a 2003 5.3 and a 4L60E short shaft trany out of a Tahoe to be installed. 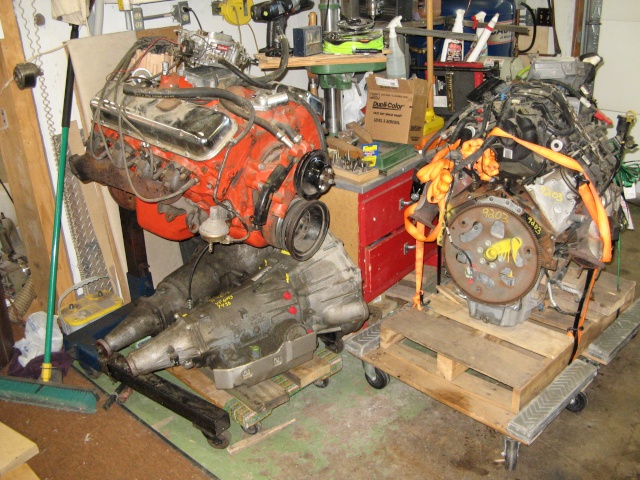 Just doing research right now for what all I need to fit the 5.3 in. Id like to keep the truck set up for intake if it will clear the hood. If anyone has installed one in a 73-77 I would appreciate and advise on what motor mounts you used. If you had to notch the cross-member for Ac to clear. What oils pan swap you used. 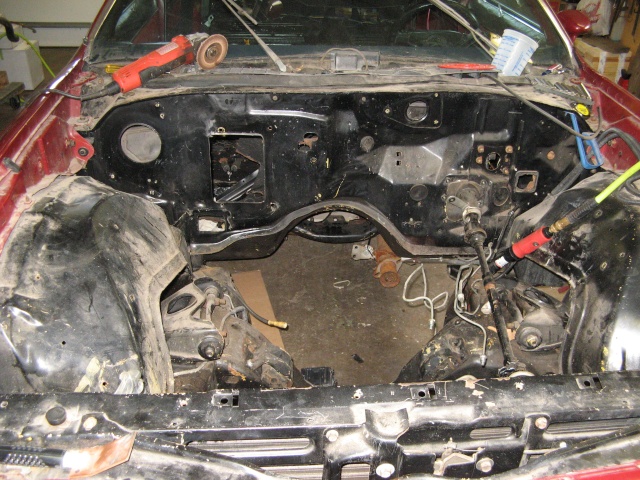 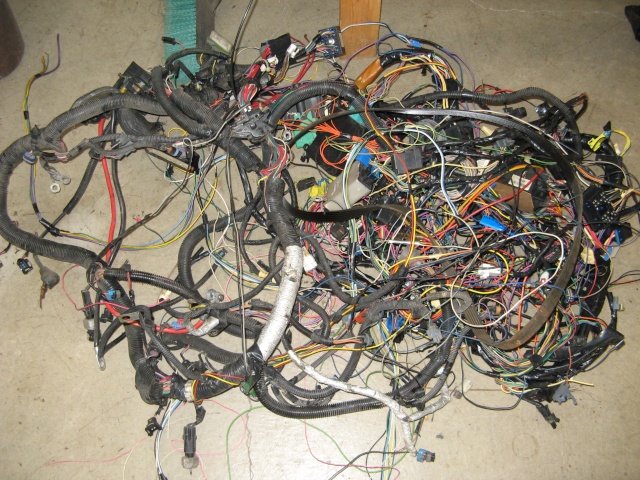 Nice! Love the poncho roof. How does the tahoe tranny work? was it 2wd, or do you just ditch the tranfer for a tail shaft?

The tranny is from a two wheel drive standard cab pick up. Sorry not from the same vehicle as engine.

would love to have that 396

thats alot of spagetti in there.
keep us updated,we know you will do it proud...

I just sold a 6.0,guess i should of kept it for my next project.

That's gonna be a great project !!

Wally talk to G3Nut- he did a modern upgrade LS Swap.

That wiring would scare the crap out of me but look on the bright side- looks like you don't have to spend any money on those swivel buckets-LOL.

Holy crap! That's the reason I'm going with the Holley stand alone computer and harness. It's pricey $$$$ but I don't have to deal with a wiring mess or tuning.

No boost for this guy just wanting a nice ride for now. I'm going for budget build and hoping to keep Truck intake set-up if it clears the hood.

Its for sale if anyone is interested. PM ME

When I started my '75 Elco project, I gutted it for sand blasting, and when it went back together, I used the wire harness from the '77 I had to scrap. Some very slight differences, but mostly the same. I think you could get a harness from a salvage yard, and just use what you need. Sorting it out is done easier with a diagram of course...

I used Ez-wire new harness. I have used them in the past also painless and autowire. For the cost its a nice harness with 18 circuts $185.00.
http://www.ezwiring.com/wiring_harness.html
I don't like taking on any old wiring as you never know what you get, Plus I will be building a dash from scratch again. Just finished welding up all the fire wall and all the holes in the inner fenders from the last guy. I will be using a vintage Air set up so will mount that all the PCM stuff for the stand alone fuel injection and electric trans. Then I will build dash around that. Keeping shifter on the floor but not stock one. Using a B&M mega shifter. Will make my own console as I like a arm rest so swivel seats will most likely be out. I don't feel there will be enough room for seat to swivel and still have a wide enough arm rest with console. 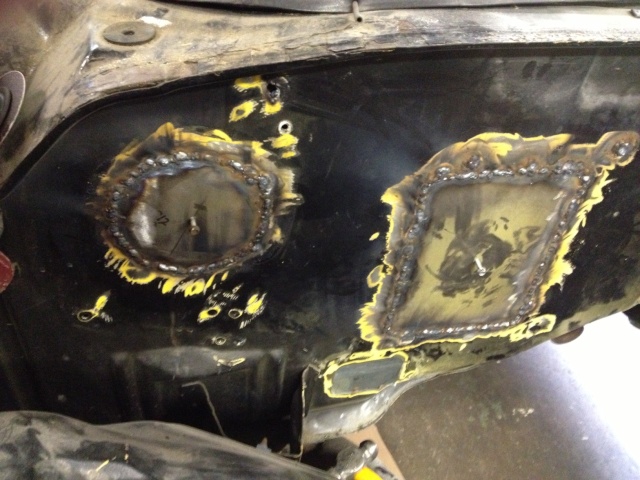 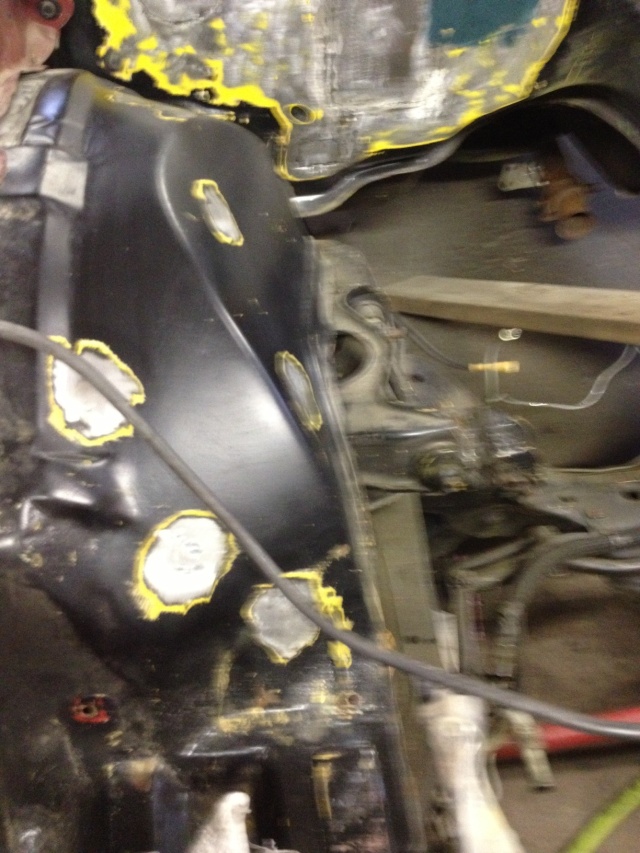 I don't have much much time left to work on it this winter as my brothers 58 Pontiac chieftain is coming for the winter so we can work on body to paint in spring.

I have not got much done since last post but will update. I have the engine bay painted now. The rear end is sand blasted painted and installed correctly. When I got the car it was held in by shock bolts and only two lower control arm bolts no nuts at all. It was missing a rotor and E break parts. Had all new springs and shocks and bushing so was surprised with that. This rear end is out of a 1995 impala. He also took the front suspension from the impala and installed that, so all 4 wheels will have 5 on 5 bolt pattern. Up front it was all new bushings ball joints tie rod ends shocks and painted. They did a good job on the front end. I think the rear end was just tossed in to move it. I have the breaks all plumbed and just bleeding left to do. I'm still hoping to set the 5.3 and 4L60e tranny in place to check for clearance issues before it get set a side for a bit.

I sold the 396 and trany and thought I would have some more funds from the sale but the PC died and I need it for work so funds went to replace that. 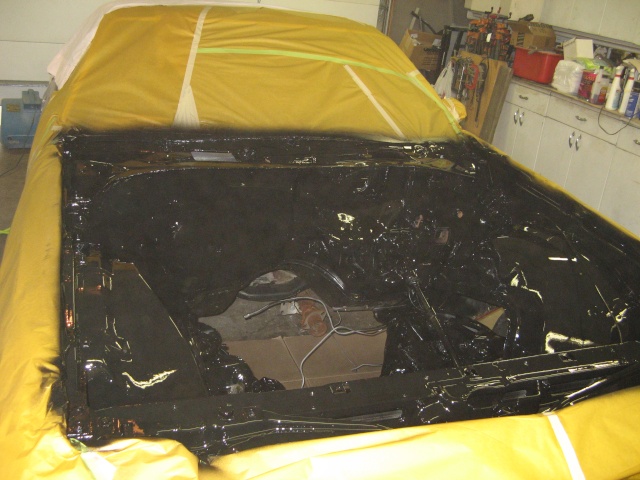 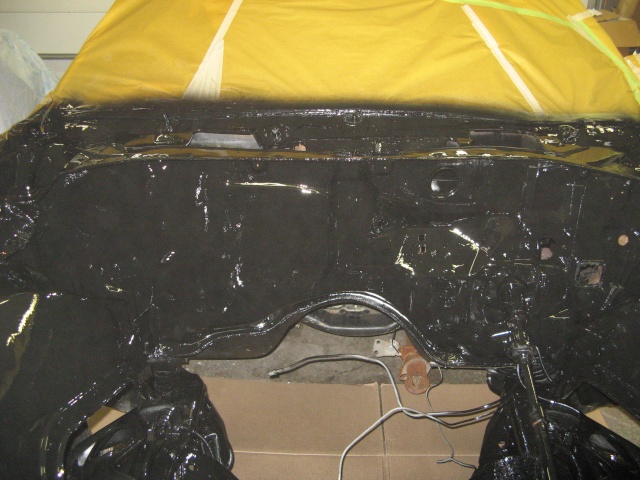 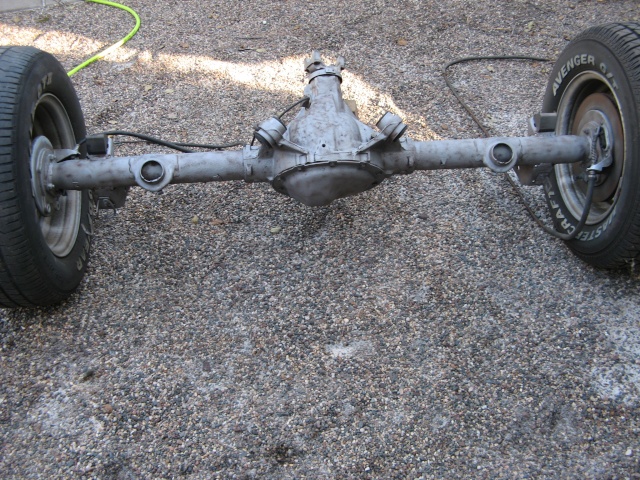 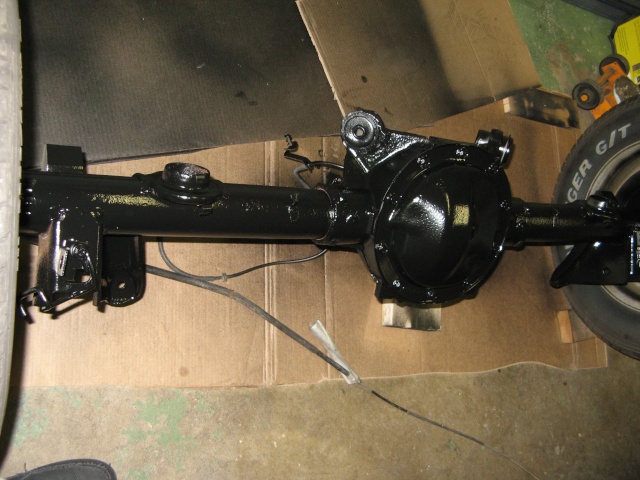 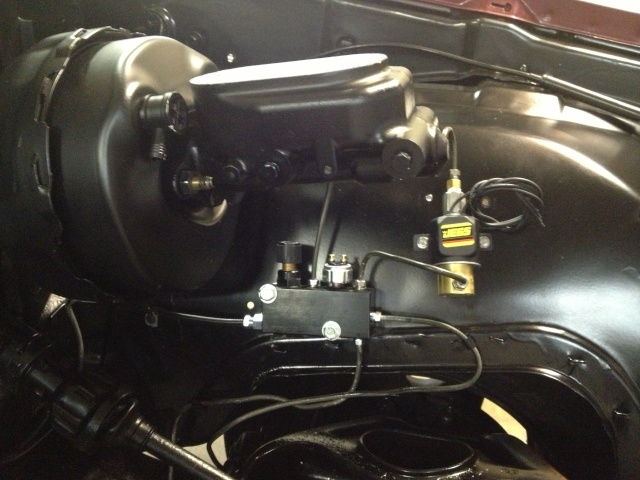 I can see that you will have a nice ride there when it's finished.

Might be my untrained eye but all those wires cascading out of the dash looks awful scary. Did someone actually plan on using that mess?

Landonus, Yes they did plan to use all of that. Its all out not and a new stock harness is going back in. That was the big problem the guy took the whole 95 impala drive line engine, tranny even the anti lock break set up. Then he tried to to a 87 Buick road master harness to try and use the digital dash units. What a mess. he could not get it started so gave up.

Hey wallyuph did you drop the ls engine in yet?
Did you get the factory harness when you bought the engine?
Putting the engine in with the factory efi setup is easier then most people think. i gave my harness and ecm to this place http://www.lsx-harness.com/
he rewired it for a stand alone harness and flashed the ecm i installed it into the car and it fired right up no tuning required.

I would have given up also. Was a pretty ambitious move on his part.

The wiring isn't all that scary when you get to sorting it out.

G3Nut, Thanks for the tip on wire harness place. I was looking for one and its nice to know you had good luck so will look into it. I have not looked into it yet as I have the truck engine and I'm not sure if the intake will clear the hood. If I need to swap intakes then injector wires need to swap also plus front end accessories so I need to wait and see after I get it in for test fit. I have Dirty dingo engine brackets that say it will fit with out cutting into cross member but they may be to high of mount for truck intake set up.

I did get every thing engine ECM and Gas pedal as its a drive by wire. 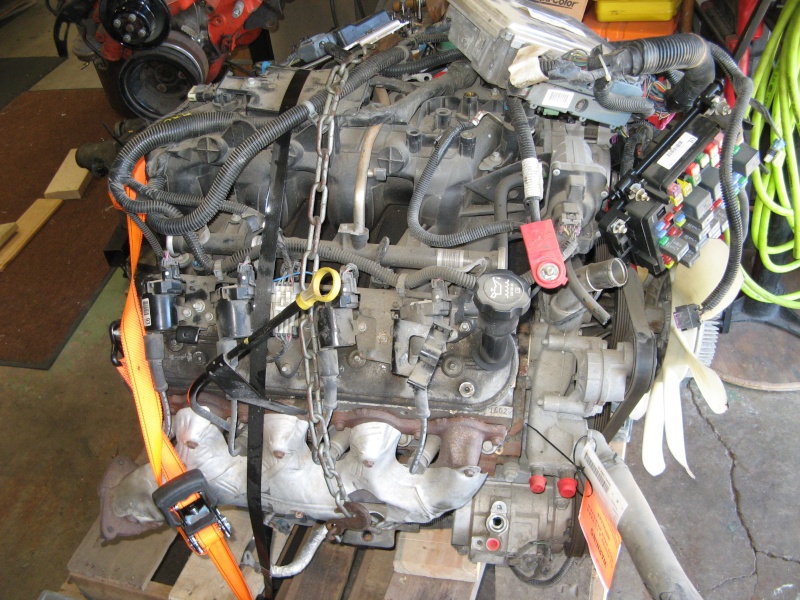 I used a set of generic 1 inch set back adaptors and it put the engine in the same position as factory. i had to notch the pass side of the crossmember becauce the camaro pan is shallow and long. but the truck ls pans are shaped more like a old stlye pan but they are alittle deeper also.
My engine looks like it sits real low in my engine compartment because the intake is so low profile. i don't think you will have any height issues with the truck intake. but it never hurts to test fit

G3nut,I was checking out your car in Lake George. That motor would be lost under the hood of my Monte Carlo! It really does sit low in there. I wanted to talk to you about it but couldnt catch up with you.