SS what? Is that a Malibu?

Thats the new car they race in NASCAR. No other name just SS. Its the G8 retrimmed as a Chevy which is what they should have done when the government made them kill Pontiac.

No coupes, eh? Imported from Australia...the Holden looks cooler somehow. The G8 was a bad @$$ little car- had they not shut down Pontiac, who knows where they'd be now but probably would have advanced the car more & would be made in the US. The interior looks awesome and 415 hp is not shabby at all, It will probably do good sales wise.

Here's another article though w/ lots of pics. The Nascar version still looks like a Monte to me. 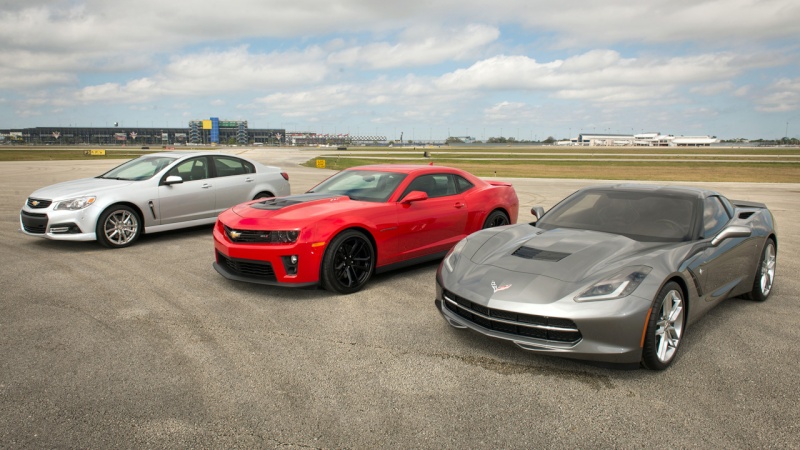 The Chevy SS is nothing new, including it's name.

After the shady government bankruptcy, and now blatant gloating of how profitable the NEW GM has become, I have purchased my last new GM vehicle.

Tell ya what, I have a G8, its a great car and I can see some stuff that isnt great in my car that I can see improved on this. I too think that bankruptcy was a sham though and had they gone through regular channels instead of getting blood money from DC they and the country would have been better off for it. Will I buy another new GM car,I dont know,depends on the situation at the time but I can see why someone would not.

The country itself may have been better off, but the workers would have taken it in the A$$ for sure, like they always do.

GM is small potatoes compared to Wall Street anyway, like AIG for example.

This argument will never end anyway I figure.

As far as "SS" is concerned, a four-door sedan is not my idea of a performance car, style-wise.

As far as Chrysler is concerned, they were bailed out some years ago, and if not for that ( for Chrysler lovers) they wouldn't be around today at all.

If we want something to complain about, the Irac War cost more than bail outs, and wasted a lot of lives.

There should have been more compromise between all parties, including the shareholders (the other bail-out). It's a real shame that people can no longer seem to come together and reach an amicable agreement. I think that's a huge problem today on lots of things- everyone's so polarized so far left or right that sane people are getting lost in the mix, like that Doctor who spoke about healthcare at the National Prayer Breakfast. The media (on all fronts) just makes things worse and all our politicians are liars save but a very few.

We stopped watching cable news as much too. The shareholders took it on the chin as well,ask me how I know. Paul I agree with you about the media-deviant bas%@rds

I'm sorry to hear that Anthony...out of all the bad deals in that whole bailout- that's the worst part. I'd sue them- time for a class action.

Nah Paul it wasnt a big deal but I was just kinda pissed,you know you believe in something and then what happened happened and what can you do? It sucks but its not the end of the world.

I didn't lose anything during the bail-out fiasco, but sure took a major hit after the 9-11 terror attack. Really cleaned me out, when retirement funds went down the tubes.
But I'm still around, and happy for that !!

Funny ... as many people out there that bitch and moan that there are not enough "traditional" V8 RWD cars on the market ... one finally comes along, and they STILL find things to bitch about. Don't like it? Don't drive one. Simple!

You want your own "perfect" V8 RWD car ... go start your own manufacturing company, and make one your damn self.

Don't like that its a G8/Holden/whatever re-badged? Tough! Don't drive one! Vehicle re-badging has been going on for YEARS! My earliest example that comes to mind is the Chrysler/DeSoto Airflow, 1934-1937. The DeSoto Airflow was the exact damn car as the Chrysler Airflow, except the motor. DeSoto had a flat head straight 6, Chrysler had an 8. I can go on about re-badging, and how long it has been going on. But I won't. It's nothing new to the industry. You all know that. But you won't EDIT admit it.

Hey, i'm 37 and bought my own v8 rwd drive car (new) when i was 28. My first new car was (is) a 2003crown Victoria. This is the last full frame rwd built anywhere, and although it is starting to turn to

do to the fine climate here i must say i will be sad when i have to get rid if it since i cant replace it with another. For the record we have four vehicles a 1960 Oldsmobile, a 1974 chevelle, a 2003 crown victoria, and a 2008 4x4 tundra. All full frame, rwd (and 4x4) and all v8's. I do agree about people bitching about what the manufacturers do build but i do have to say a little more effort could have went into what the'04 gto looked like. At least performancewise it didn't disappoint.

I loved the looks of the 05 GTO and I love the looks of this new Chevy. Most people think a car must look out of proportion to look good. To prove it go to a car show and see how many chopped tops and ground dragging cars you see there. It's like taking a photo, you have to have good compisition for the photo to look good. The ONLY thing I don't like about the new SS is the price will be $15,000 too much to please me. JB

pila wrote:I didn't lose anything during the bail-out fiasco, but sure took a major hit after the 9-11 terror attack. Really cleaned me out, when retirement funds went down the tubes.
But I'm still around, and happy for that !!

I pulled out after loosing 30% plus after "Black October" (98?) I don't remember the exact year but it seems to be somewhat cyclical when they take your $$$$.

JB2wheeler wrote:I loved the looks of the 05 GTO and I love the looks of this new Chevy. Most people think a car must look out of proportion to look good.

Sorry, have to disagree on that one. The GTO was a fantastic machine under the skin, but on the surface it was an elongated Cavalier. Fantastically bland, as is this car. The designers clearly phoned it in. If GM had had the balls to something retro with the GTO like they did with the Camaro, it might have gone a long way toward saving Pontiac. And this car won't get the blood pumping either, with or without a stick.

Might sound crazy (wouldn't be the 1st time) but the Solstice & the final version of the G8 (the GTO vesion) could have started to turn things around for them. They're both kind of collector items already (Saturn Skye too). Unfortunately by then it was too little too late.

I'd like to see the current SS in a coupe version. Maybe down the line they will, who knows.

I liked the G8 -- first time I thought Pontiac had a winner style-wise in the full-size category.

77mali wrote:
I'd like to see the current SS in a coupe version. Maybe down the line they will, who knows.

They already do, it's called a Camaro. JB

I always hated that 'new' GTO.