Picking up some parts for my rear and stumbled upon this. Looks like Motive Gear makes a performance line of axle shafts in "kit" form. They are supposed to be a better steel with a deeper heat treating. Kit includes all the bearings, seals and even the studs. Ten year warranty with no question asked.

http://www.tenfactory.com/ You have to open up the catalog and you will find 73-77 chevelle/malibu listing.

They also sell individual axle shafts without the kit.

I think I'm going to pickup a kit since I have everything open right now.

Ok, figured I'd post up on some deals I've located. I have my 4.10 rear opened up getting ready for a fluid change and glass blasting and paint. I find two slightly chipped teeth on two of the spider gears. So I figure I'd toss the GM posi in favor of an Auburn. So I slide out the axles and find the drivers axle, bearing area, has a groove (indent) where the bearing rides and there is some pitting in the same area. So I would like to change out that axle. Passenger axle is fine. So now I figure, I need some new bearings for the auburn so it maybe cheaper to buy a master kit and have some extra parts.
Did some research about bearings. I always normally use Timken or National bearings. But I've stumbled upon the company Koyo. Reviews I've found have been either excellent or nobody has heard of them. They are made in Japan. Then I find out that Timken merged part of their company with Koyo or vice versa. But with the good reviews, I'd consider either bearing company.
With reusing my ring and pinion, I'll have a brand new rear and posi (aburn which I favor) for $600. A new ring and pinion would run less than $200 if need be and there are some good package deals on ebay for even cheaper. Mine is a Richmond ring and piinion from back in the 80's.
So here is what I'm picking up.

I think thats a pretty good deal. The additional savings comes from me setting up the rear myself.

I put the links up for the items especially the MASTER BEARING KIT in case anyone is thinking of picking one up. I offered the guy $50 and he took it. It normally runs between $80-$110 for that kit.

Just FYI guys. While I'm inside the rear, might as well freshen things up. But I'm especially happy about the axle upgrade.

Did you stay with the 28 spline? I am planning on using the Moser 30 spline direct fit axles in mine. They are about 270 I think for the pair. The eaton carrier I was looking was the same cost for 28 or 30 so I thought the upgrade was worth it. As far as the Koyo bearings I, have used them. I forget which car they were in. The Chevelle or the Nova. But they have since been replaced after many years and a gear swap. But they worked just fine and there was no issue with them.

Yes, I stayed with the 28 spline. I was looking at other posi options and really didnt want clutches again. So I was thinking of maybe a locker or even a locker kit that goes into a stock housing. But then I think the stock housing is a weak link for it.
Just spoke with Motive Gear Ten Factory about the bearings they supply. Tech told me that they come with Timken bearings.

Thank you for the info. This sort of thing is what makes a website like this really great. JB

JB2wheeler wrote:Thank you for the info. This sort of thing is what makes a website like this really great. JB

Thanks. Just figure someone might be looking for info on some parts.

These are the 30 spline Moser's

That's pretty darn good info. I really am digging those axles. Thanks!

Ok, just got the axles from fedex.  Axles look great, no visible casting issues, nice black paint even on the hub.  Machining looks excellent and I'm definitely happy with them.  And a pretty cool "ten factory" sticker on the hub end just like strange puts on theirs.
Just got off the phone with ten factory.  Told them that I was disappointed about the bearings they supplied me.  The bearings are INA # 66263 (stamped USA made, which helps with my concerns).  I was told by their customer service before I ordered from Summit, that the bearings supplied were Timkens.  Real nice customer service guy helped me by searched their timken catalog.  He stated that they always supply Timken bearings but in this case, timken does not make a cross reference for our axle bearings.  I told him I find that hard to believe since GM used the same bearing for years.  He assured me that the INA brand is an excellent bearing and that they have not had any complaints regarding bearing failures.
So I took a look on the net and sure enough, I cant find a Timken bearing for outer axle shaft.  They have them for the diff side but not for the axle end.  Found that unusual.
Searched the net for the brand INA and found that they are a US company and have a location in Germany as well.  They are under the name The Schaeffler Group.  Looks like a huge company with extensive manufacturing.  Also found that they also produce LUK brand clutches and dampers.
So after looking over the companies site and the products they make, I am satisfied with them enough to give these bearings a shot.

And thats about it for my update.

Pics of the actual product ???

NICE!  Those look great.  How are you going to press in the studs?

Oh & shame on you for bending the old ones

Funny, I've never bent them in the chevelle even with the 4.10's a clutch and built motor. But with the new motor it may be a different story. Also funny, I've bent both axles (at different times) in my 96 Tahoe with 30 spline axles. Go figure.

I was going to try to press the studs in on my press. But I think it will be easier when I reinstall the axle and suck them in with an old lug nut.

Joe73 wrote:Funny, I've never bent them in the chevelle even with the 4.10's a clutch and built motor.  But with the new motor it may be a different story.  Also funny, I've bent both axles (at different times) in my 96 Tahoe with 30 spline axles.  Go figure.

I was going to try to press the studs in on my press.  But I think it will be easier when I reinstall the axle and suck them in with an old lug nut.

Bent axls on tahoes are common.  We recently priced a pair for a customer (from chevy) and they were something like $450.00 a piece (our cost)

Have these style wrenches?  Good to have a set for odd ball stuff like that. 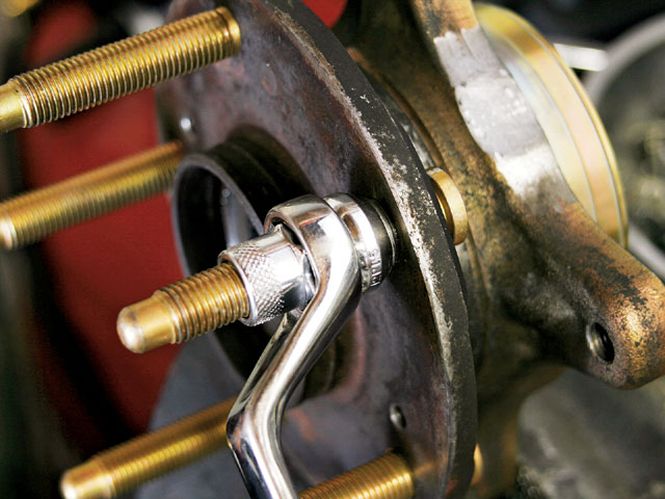