That is definitely different than mine, but it looks like it fits well! Thanks for the part # also.

On saturday I hooked up all the lights, and to my amazement it all worked! Good to get a positive surprise for one time sake. However, I need a new brake light switch, turn light sockets, and a new headlight as the low beam doesnt work on the brand new Wagner Truview Sealed Beam..

I had hired temporary lisence plated for sunday so I could test drive the car. But when it came to the startup I had of course drained the battery after all the light-tests, and also because the ignition key was on for a long time. Used jumper cables from my other car, and got it started. Took it for a drive and turned the lights on, but after 5 mins it started to die on me, and as I returned to the garage it stopped. Jump started again, and drove with lights off. This worked.

I went up to my parents house, and as I drove down the driveway I honked. At that was enough to kill the car instantly!
We did some troubleshooting, and concluded that the generator is defect.

Some pics from the test drive. Here it had stopped again as I tried to back up to turn around. Backing lights probably came on and killed the engine.

I now see the height is pretty far from 1973_454_Monte's. But I think it looks ok, and I'm quite reluctant to do any more suspension work this year.

Another thing I'm not very happy about is some strange behaviour from the transmisson (TH400). At slow acceleration it hessitates a little when shifting between 1 and 2.gear. Like it spends time on the shift it self. It was this way that time I bought it as well, but I've always taken it for a very smooth shift. Tried to give more throttle out of an intersection yesterday, and this ugly grinding sound was heard at the 1-2 shift. Like when you miss a gear with an old manual car.

Oil is looks fine and does not smell burnt, although it was very low on some of the previous test drives. They were less than a mile however. The transmission was allegedly just rebuilt as well, and it certainly looks brand new. I see worst case scenarios, but I'll read up on the mighty web first.

Som news about the generator issue.

My father did som experimenting (swapped wires) and found out that the thing was charging as it should. However it was charging so hard it was about to blow the battery.

After some further research it is likely that this generator had an external voltage regulator, as it belongs to the Buick 430 engine from 1969. Apparantly, the previous owner didn't take this with him the time he put the engine in.

So the plan now is to buy an original generator for a 1975 MC with an internal regulator. Just have to check that the bolt holes are the same.

Some pictures of this weekend's work

At this point I was pretty satisfied, and planned to use a heat gun to smooth out the remaining wrinkles

The next day I used the heat gun, but in some parts it got so hot the glue started to loosen, and it got even worse.
However, after letting it cool the glue had a cement like property. And it would hold on to the fabric better than the day before, while still being able to move it. So I stretched it like hell, and ended up with this:

Some of the insulation is touching down here and there, but overall I'm happy with the result.


I also put in moisture shields in the doors. Kind of thinking that I should have covered the whole door as I'm writing this..well, it's a pretty straight forward job

great job on that headliner! i have that isolation issue too, but its under the sunvisor so i dont really care

Thanks man, got gluey fingers for sure

hey whats that wire hanging out of the headliner above the windshield?

Great job! I'm dreading mine...one of the few things I may pay someone to do.

77mali wrote:Great job! I'm dreading mine...one of the few things I may pay someone to do.

no need man, save your money. it really isnt that hard

This was my first time as well, and it really was quite self explaining once you get started. If it gets too messed up you can always heat the glue and start over again. Think I spent about 5 hours. I'm not going to call it 100% perfect, but good enough for me.. for now

This video could give you some tips: https://www.youtube.com/watch?v=ucjvgMKls9U

Abjac: that wire in the front goes to a small lamp.

I'm more afraid that it won't stretch correctly and "centering" is not one of my favorite things to do. Somehow I'm always off by an eighth or quarter inch

I'll check out the vid though. Maybe I'll be brave.

Took a day off on friday so I got a long weekend to work on the car. Put in a new generator with an internal regulator, and it functions properly.

Speaking of the headliner, it had sagged pretty bad since my last stretching. The glue probably lost its strength when I heated it. So it was out with the spray on glue again to redo it in the relevant spots. Was still holding up good when I left today.

Painted some of the remaining interior. Poor adhesion, but these parts aren't very exposed.

Got the seats back from the upholstery shop, so I could reassemble the interior. The opera window panels were so crispy at the tips that they cracked up.

All of the exterior lights work. My father helped me here as i suck with electronics.

Makeshift kickdown arrangement. The donor car must have had a switch under the throttle pedal. The lokar kit i bought hooks up to the carburetor, but the only attachment point we could find was on the wrong side of the shaft axis. So more throttle makes the cable looser instead of tighter hehe. This block fixed it

Took it for a spin on saturday night. Although the roads were moist, I was actually surprised how easy it was to spin the tires, even with the positrac axle. Lots of torque in that 430. That "hesitating" shift and sound from the transmission is still there occasionally, but it is not messing up the driving.

Washed the car and put in driver side roof rail gasket today. Still need the small rail on the passenger side to put the gasket in. Ordered this together with some interior parts from Monte Man, which should be on its way now.

Here's a quiz for you guys. Tell me what the leftover parts in this picture are for. Item #3 from the left is in rubber.

Fishgrinder wrote:Took a day off on friday so I got a long weekend to work on the car. Put in a new generator with an internal regulator, and it functions properly.

Speaking of the headliner, it had sagged pretty bad since my last stretching. The glue probably lost its strength when I heated it. So it was out with the spray on glue again to redo it in the relevant spots. Was still holding up good when I left today.

Learned from the best

Easy with the copycat labeling, lol!

FG if you want those wheels to shine, Mother's aluminum polish and the Mother's ball will clean them up quick. Might not be quite as shiny as Chris', but my investment was way less. Mine looked about as bad as yours BTW. Here they are now. 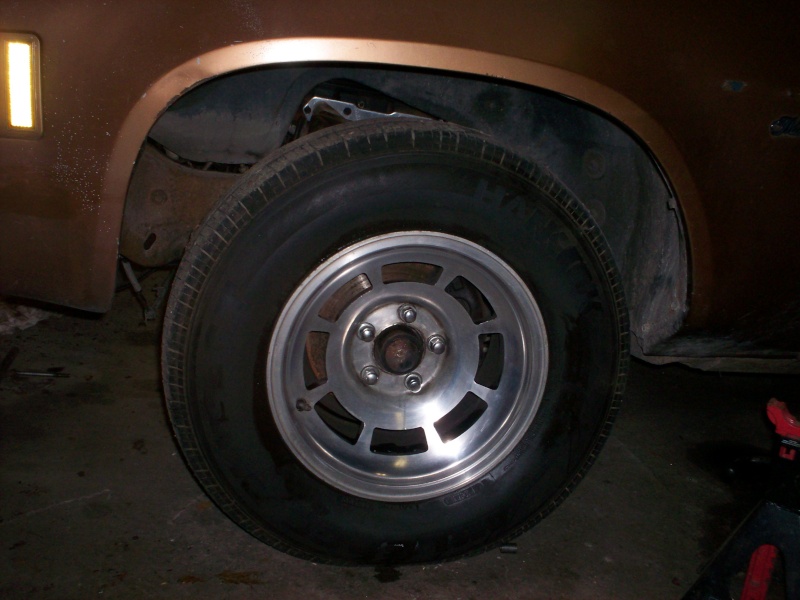 Depends If I get the time to do it. There is probably not much more than 1 month left with drivable conditions for this "kind" of car here. So my main priority is to get it approved.

This must have been the fastet summer ever..

Fishgrinder wrote:As a matter of fact I have the Mother's polish and a power cone in my car

Depends If I get the time to do it. There is probably not much more than 1 month left with drivable conditions for this "kind" of car here. So my main priority is to get it approved.

This must have been the fastet summer ever..

I know what you mean...the summer just flew by. It's too bad you can't get more time over there. We can generally get through most of November w/out a problem but old man winter is right around the corner.

Got the stuff I ordered from MonteMania last tuesday, so this weekend it was the last big effort to get the car finished.

Made a copy of the old door felt I had

Then installed the door panels

Spent hours adjusting the windows, and I think they came out allright. However, I get a small gap right beneath were the arrow is pointing on both sides. It is about the size of a pencil, which easily can pass through it. Is this the design, or have I messed something up? Seems to be caused by the roof rail gasket bending inwards to the attachment points.

Today I had the car inspected in order to get it registered, and it got 0 faults

Then I went for the first "long" drive up to the place where I live. This is a distance of 80 miles, and it worked perfectly. Very tight through the cornes. However the noise inside got kind of annoying after half an hour. This is both wind noise which I suspect is increased by this gaps I wrote about, but also that deep bass sound from the engine.

Turns out the upholstery guy put my headrests on the wrong way. I thought this was an east fix, by loosening the brackets and pulling the rests out of the seat backs. But no. Turns out they are actually stitched in ;(. I'll get him to fix this, it messes up the seat belt clip which goes on the head rest.

Anyone know if it's simple to just take the back pieces of the bench out? Not very keen on taking the whole bench out again...

Can you repost a "zoomed out" picture on the gap? I can't make out what it is I'm looking at or looking for. I'll try & compare to my drivers door that is still complete & on the car.

77mali wrote:Can you repost a "zoomed out" picture on the gap? I can't make out what it is I'm looking at or looking for. I'll try & compare to my drivers door that is still complete & on the car.

Right behind the tip of the whisker here.

Gap is there with window all the way up.