Keep up the good work, you WILL get finished sooner or later. JB

Finally got the front breaks completed, and bled.

I decided to try to restore the side marker lights. Picture is from before I started. What I basically did, was to
use the same procedure as 3M's headlight restoration kit. That is sanding with 500 dry, and then the following steps wet; 800-1000-1200-1500-2000-3000. In the end I simply put some plain turtle wax on them and wiped it off.

And this is after. Maybe it doesn't show that well in the picture, but I really think they got the "fresh look" in real life.

Then i started putting the bezels together

And the front. I found out there are two brackets supporting the bezels and center piece, which I wasn't aware of before. Fortunately I found them in the parts heap. This made aligning everything a hell lot easier lol

Starting to look quite complete now

Here I've put on butyl tape to seal between chrome trim and gasket rail. Almost got the driver side together before I had to quit.

Excellent !! Another one back on the road soon !

I've been trying to find the power rating of my 430 export engine for a long time without much luck. But today I stumbled over this amazing site which lists specs for cars built for the European market (and the North American).

Very cool if this is correct!

Thanks for the link. JB

Right now I'm going over the rear, replacing all bushings, springs and shocks.

Spent like 5 hours TRYING to remove the bushing in the passenger side ear of the rear axle, but the thing is stuck. I'm about to go insane, but will make a new attempt tomorrow.

The old rear springs are taller than then new ones. Is this compensated by the new design and higher springrate? Not good if the car sags in the rear.

looks to me like,they gave you cargo coils. did you use my # and they crossed referenced them,or did they just look them up for the car. mine nor chris' look nothing like those.

I wasn't able to use NAPA 1973 454 Monte, as they didn't accept foreign billing adresses. So I used Summit and picked the first and best rear spring I saw.. doh!

So this will lower the car as hell in the rear? If that's the case I have to get the "right" ones.

According to the rates I looked up, your new springs have a higher spring rate at load height than either the regular or heavy duty single rate springs for the Monte Carlo. Since they are progressive rate, they will have a compression rate that is higher than the 158 lbs/in. when squeezed shorter than the load height, and less than that rate if your car isn't heavy enough to squeeze it down to its rated load.

I bet you will be satisfied with these springs, and if not- at least they are easy to change out.

Limey wrote:yes sir them coils you have are cargo coils even per there site with that part number you supplied Fishgrinder

i gave him the NAPA # that i used. even chris got regular springs.

but seeing that the # was not crossed into something he could get. he went with what the dealer thought would fit.

I'll just try them, and at least they are easy to replace as Bigred says.

However the springs are not my main concern now.

I got that damn differential bushing out yesterday, and put the new ones in the freezer over night. Today I started with the driver side one, and was able to drive it in after 1 1/2 hours with constant hammering. After that I spent like 4 hours hammering on the passenger side, but it still is 1/4 inch from setting against the flange. Seems like it is not moving at all.

I'm seriously about to go insane. This ridiculous thing has set me back 2 days already

Any tips? Maybe a freezing spray will help.

Try heating the ear with a propane torch.

I would stop hammering and use some sort of press. You can build one out of some all-thread, a couple nuts, big washers (or some sort of plate), and a large socket. Just make sure you lube the threads as you're tightening.

FYI - I have a set of almost new stock rear springs (1,500 miles on them). I replaced them when I put the coil-over's in. PM if interested.

Those cargo coils are going to make it sit lower . Try a set from a b-body sedan if you want to lift it up. They might be more readily available . The spring mfg's dont make as many as they used too.They just lump all the numbers together now.

Ok, here's this weeks work. Scroll to bottom if you want to see the outcome of the cargo springs.

First I got the car up on support jacks

Then I snapped bolts on both sides for the sway bar. I should have loosened the bracket itself instead as
the bolts for it turned around very easily. But of course I didn't think that far..

Shocks and control arms out

Pressed in new bushings and painted them

Then I ran in to the issue with the stuck ear bushing which is posted above. Got help here, and it was
pressed in. We then assembled the whole rear again. 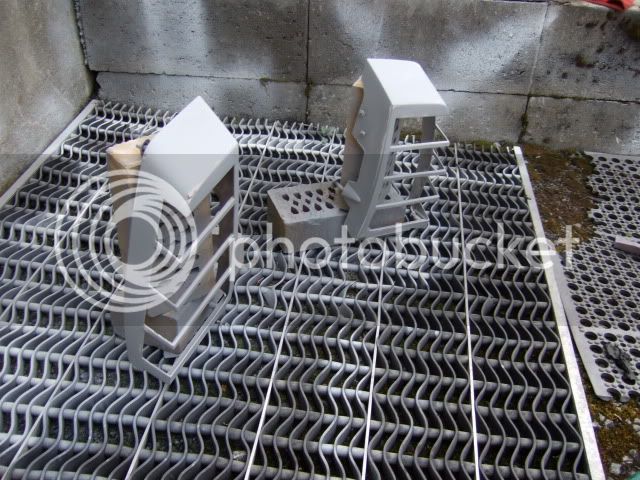 Painted the tail lights black. I actually decided on this the day I bought the car hehe.

Same with the drums

I thought the electric fuel pump was broken, and bought a mechanical pump

However, I found out a connection had fallen out under the hood, and the pump actually worked lol. But
I prefer a mechanical pump for less noise and power consumption

Spent some time routing new fuel hoses for the pump. Have to find a more permanent solution next time

Put the Lokar kickdown in. Waiting for a bracket to connect it to the carburetor

Any Idea what this leak could be? Very slow dripping

Glued in the trunk gasket. Struggled a little here to find out how it should sit in the rail

Then it was all set for a startup, the first one in two years. With aid from some Start Spray it fired almost immediately. I had also put fresh oil in it prior to this.

Pictures from the (second) test drive

I dont think the rear looks too low actually, rather the front. Maybe the 275's will change the look a little.

What do you think?

That leak could just be a bad O-ring. You'll see it when you take out the speedo gear.

I like the stance. The advantage with these springs is you can load up the car with some friends (and a couple of kegs in the trunk!) and you won't be scraping frame on any speed bumps.

Can you take a couple more pics of the trunk weather strip? It looks like a different style than what I have, I just wanted to check it out

Very nice indeed...I bet you were glad to get behind the wheel! Congrats!

JiMi_DRiX wrote:Can you take a couple more pics of the trunk weather strip? It looks like a different style than what I have, I just wanted to check it out

There was trying and failing before we found out how it should be installed. No instructions came with the kit, and the old gasket went to the garbage dump 2 years ago. At least we think the way it is no is the correct way lol