Been quite a while since I posted. Super long story short, I broke 3 pistons in the 572. Apparently the stock GM ZZ572 pistons weren't up for boost. So, I took it out and had it rebuilt with a bunch of really good parts. JE pistons, Oliver Rods, etc... Engine has been back in the car for a while now, but ever since I put the boosted 572 in, I've been fighting heat issues. It just gets too damn hot in AZ for this thing to cool itself down.

So, I was doing some research, and read that the 2017 Camaros have 3 radiators. I thought, why can't I do that. So, I did.... started off with 1 extra one (on the right), and it helped, but not enough. So, I plumbed in a second aux radiator (on the left, not painted yet) and I'm happy to say that cruising in town on a 105 degree day, with the A/C on high, it hit about 208, and on the highway, I'm at 195. Honestly, this upgrade was worth at least 20 degrees. It was pretty brutal anytime it was over 100 degrees outside.

208 might sound high, but all these new cars run around there, so I'm calling it a win. Still have a few more ideas on getting fresh air into the Procharger to knock a few more degrees off, but I believe I'm on the right track. Never thought I would see the day where there is literally no room to mount stuff on this damn car, but I think I'm there. OH.... and I put in a Z06 oil cooler as well. Thing is like 35" long. It's ridiculous.

So, now I have about 5 gallons of water/antifreeze, 3 radiators, 4 fans, and about 8 quarts of oil. In addition to the cooler, I had to run a remote oil filter setup to accommodate for a larger oil pan w/kick outs.

wow if there was ever a person to figure it out it would be you nice job.And how does the 572 run now with the new parts and rebuild?

Damn nice job there sir. If you're looking for more room to mount things, isn't there room in the trunk? lol
That is one sweet job of engineering things to say the least. A big old two thumbs up to you!

Next trick is to use the air conditioner to cool the intake charge like the Demon.

I need to drive up from Tulsa and see this fine install update. Outstanding job. JerryH

Damn you rock dude. I have followed your build since i joined here, and i mist say you are an inspiration and push the boundries for what can be done. Hope you have more godness to share with us.

Nice exhaust. I wanna do mine like that with my 540(on my red car). But I think I will do it while the car is apart. For now I have to look at my ugly 3" tailpipes sticking out from the frame. Looks great, you have done a lot of work there.

Also what did you do up front for the big brakes and calipers? I want that too.

I looked at the older posts. It looks like some kind of a hub was installed on the spindles to accommodate the larger rotors. Is that right? Can you point me in the right direction for that? I need better brakes.

BAER sells a kit for these cars. They are basically B body spindles with their own brackets to accommodate whatever caliper/rotor combo you go with. Comes with the spindle, hub, and brackets. I had the Sport/Track system on it for a while, and it stopped fine. It really doesn't NEED the 6 piston brakes, but I love the look and it definitely stops HARD!

Cooling upgrade 4.0. It's been running pretty cool, but I think it can do better. While I had this idea before I saw it, I'll admit I stole the actual look from that sweet Holley Wagon. Really liked how they did the front bumper. I think it looks like the factory could have done it that way. I headed out to the junk yard and picked up a front and rear bumper. Had a friend cut the hole and add some rounded sheet metal to the inside to make it look finished. Also welded up the bumper jack slots. Never liked those... Both bumpers are off to chrome tomorrow. No clue when they will be done, but I'm excited. Not even worried about testing at this point. I mean, really, how could this giant @$$ slot not help with the cooling??? It'll go straight into the intercooler that is currently sitting behind the bumper asking for more air.

I love it. Nice job.

I wanted to have the same hole in the front bumper like Holley but my metal man said that he can't repeat those smooth edges of the cut to make it look finished.
Now I got the idea of how to make it nice, thank you)))

Realized I hadn't posted a photo of the bumper on the car! 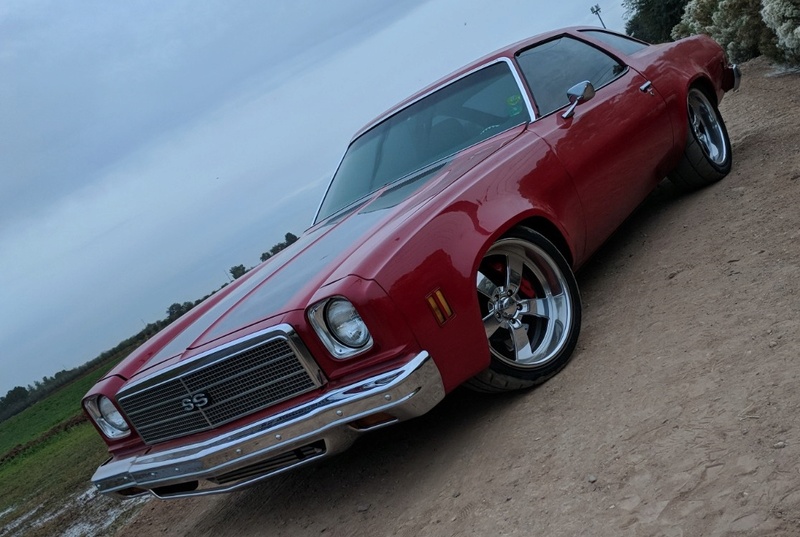 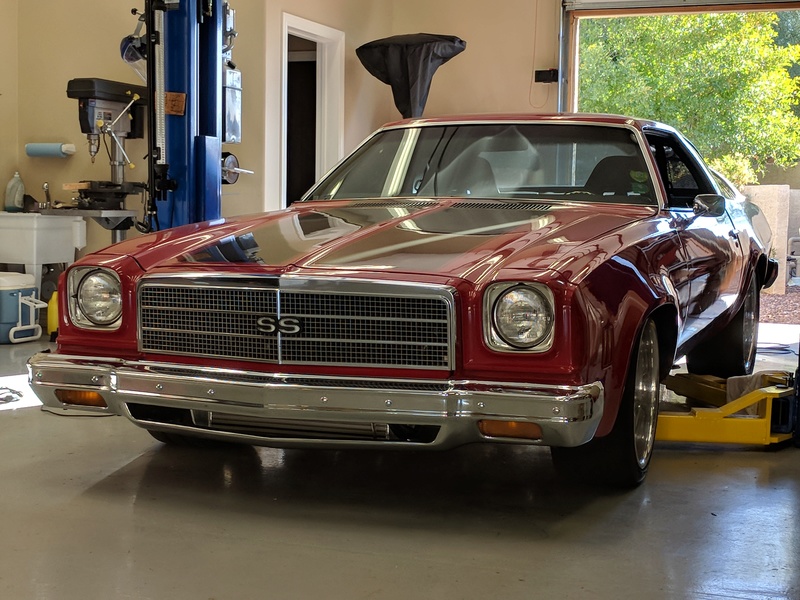 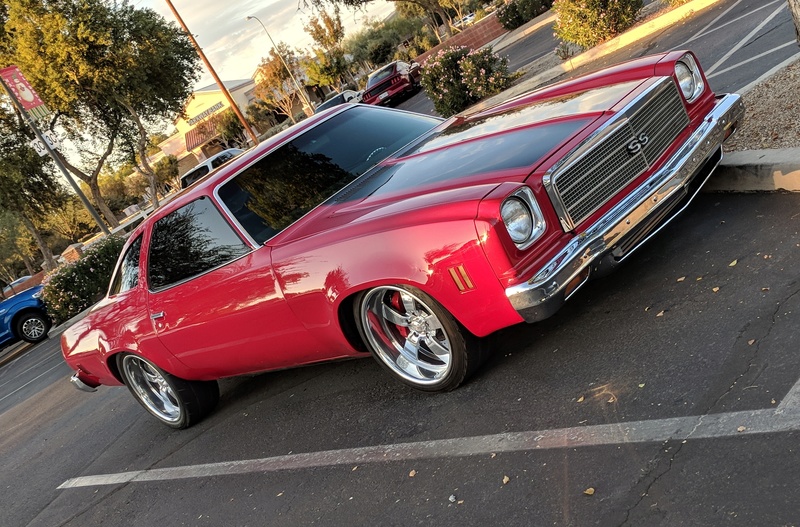 Cool! Looks a little wider than on Holley

Damn, that car is a beauty!

Center console... Finally. I've been on way too many Power Tours without cup holders!!!! This one is not going to be one of them. Pretty happy with the way it all came out! Powder coated with a leather wrapped armrest. Oh, and a little Holley Digital Dash for fun. Man, this thing is pretty damn cool! Just need to swap out some of the stainless hardware for some black ones, and call it a day. 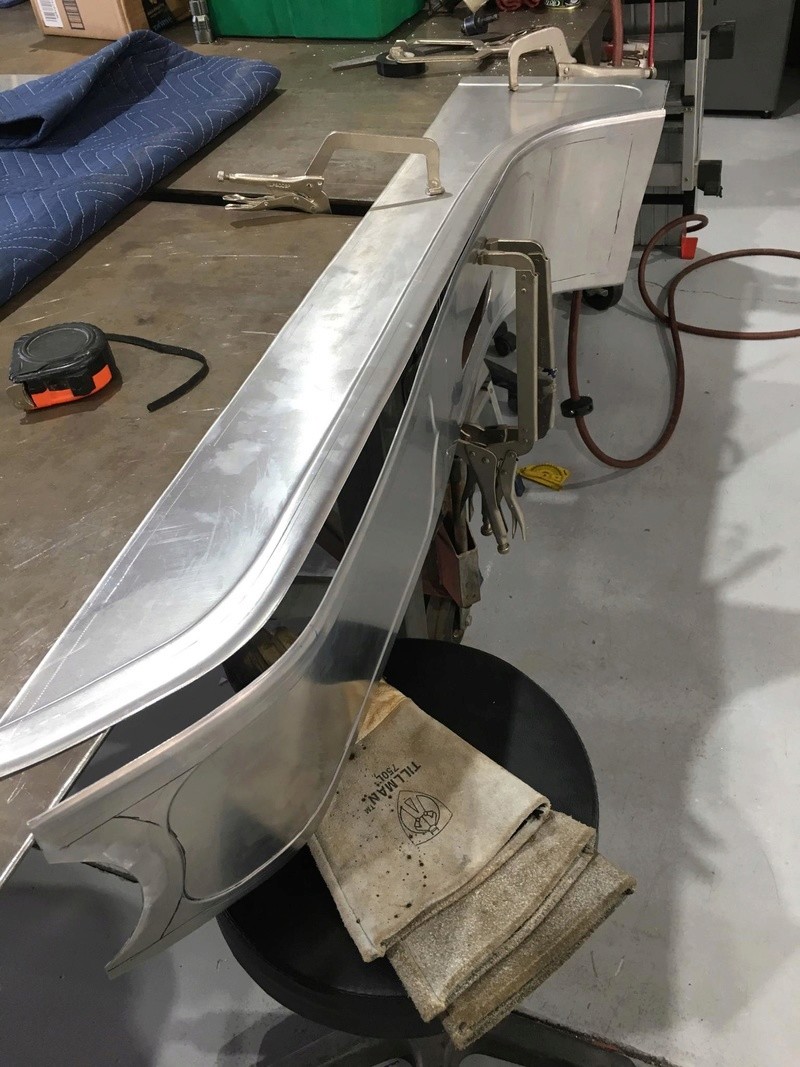 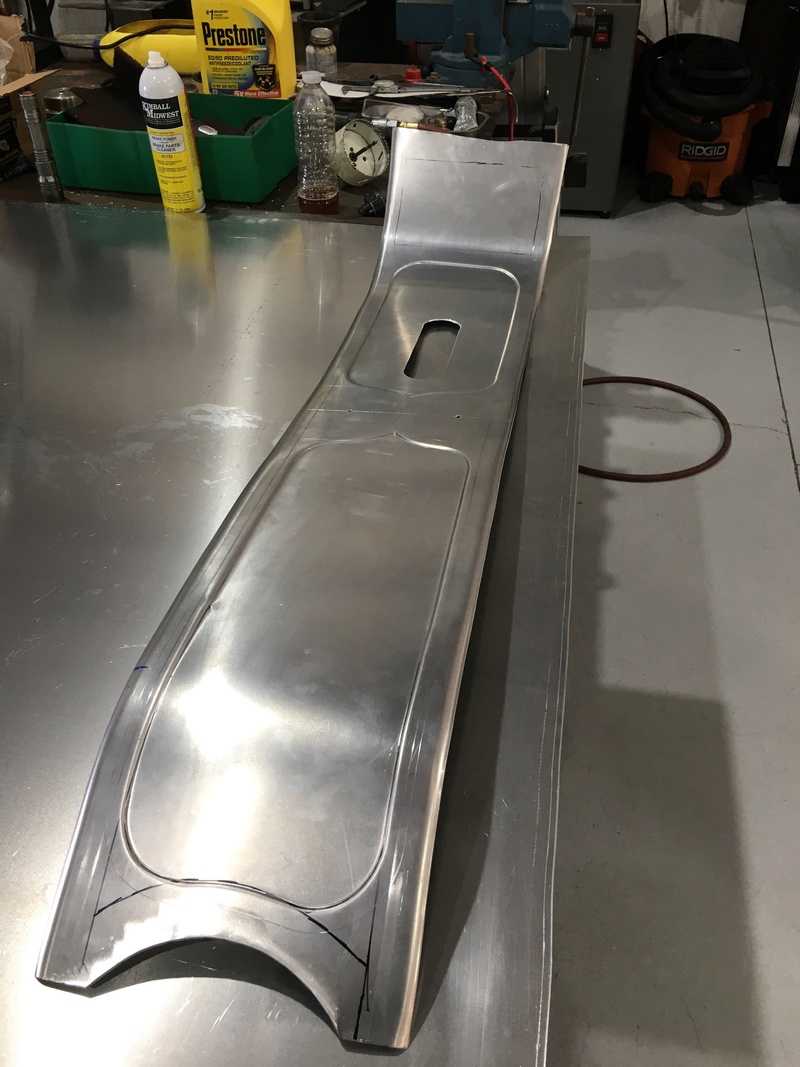 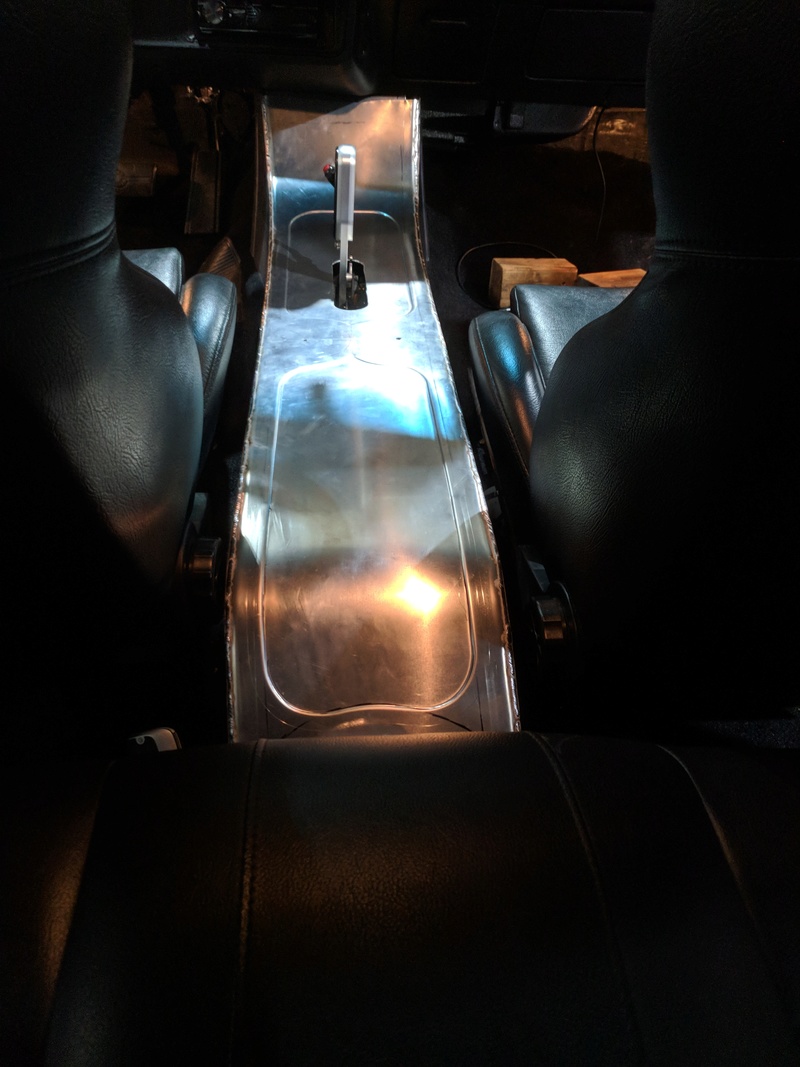 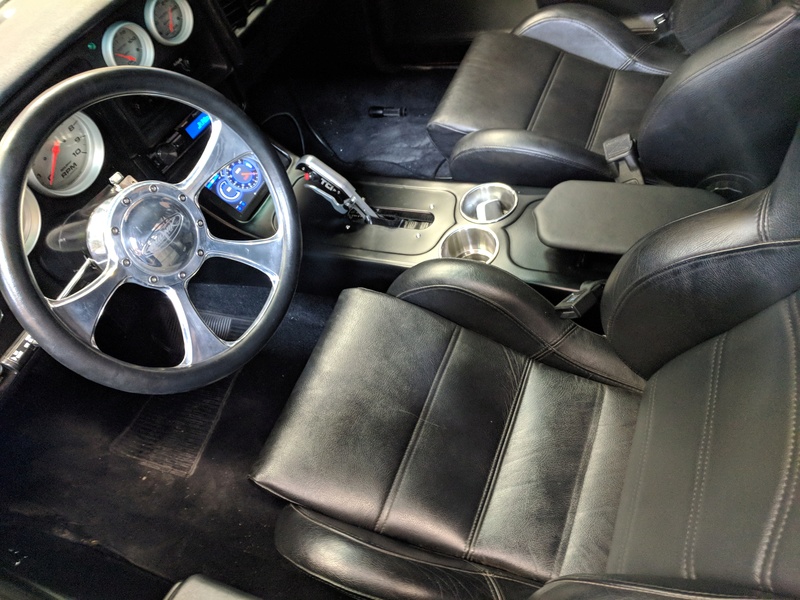 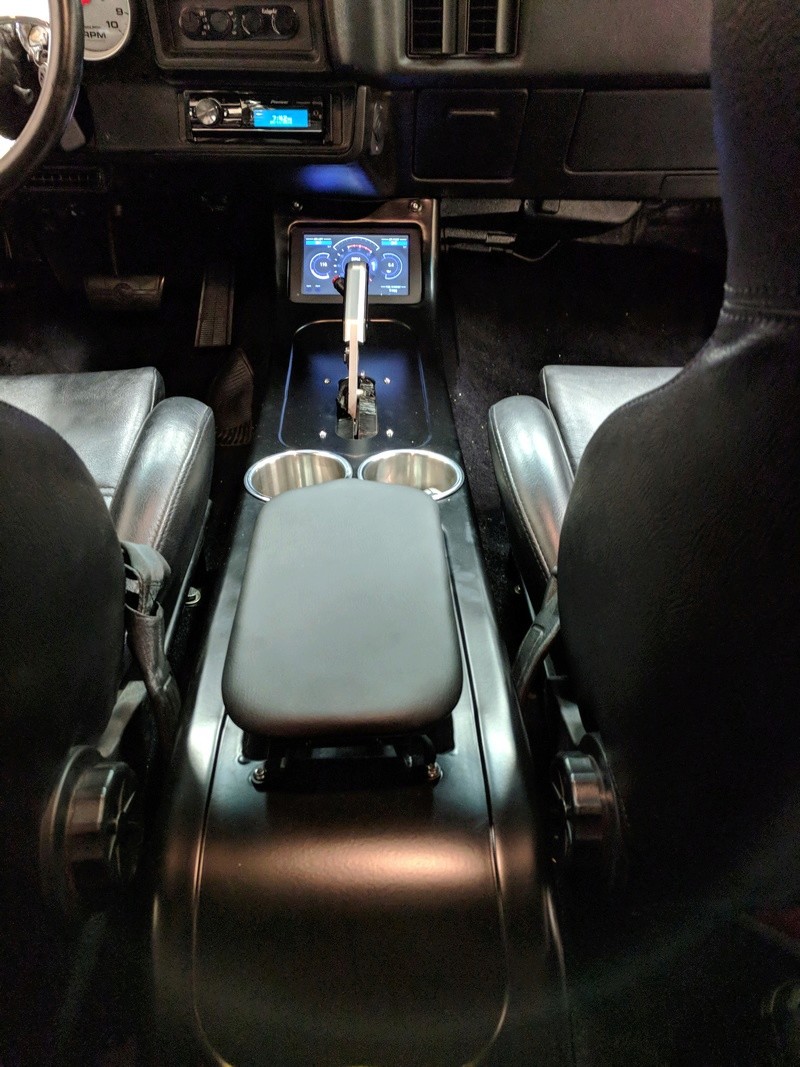 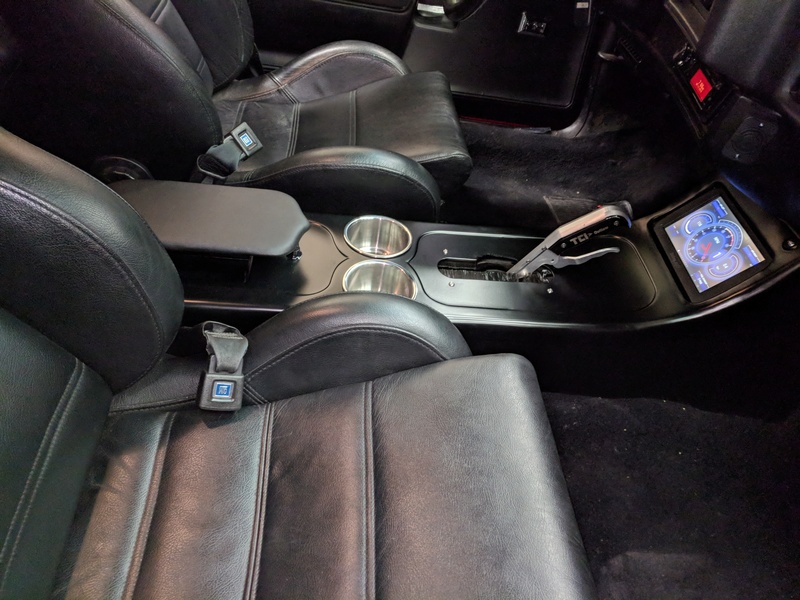 You are an amazing guy !!

Looks good! The design and finish came out great.

Wow that console is sweet!!! Nice work! Funny that you mentioned cup holders on the power tour, that was when I decided to build my own console last year. HAHA!

Now after seeing yours I want to build a better one.

Thanks! Finished another little upgrade last night. Painted, and installed this custom coolant recovery/surge tank. Also bent up some stainless steel hard lines with tube nuts/-6AN fittings. It's got a clear sight tube so I can see the level of the coolant.

Took a lot longer to make than I was planning, but I couldn't find anything on the aftermarket that would fit where I needed it to fit, or have the capacity I was looking for. This thing holds just under a gallon.

Started with some aluminum square tubing, and milled down the front two corners for a rounded look. Put a piece of aluminum inside to act as a baffle and reduce any swirling.

Welded up the top, bottom, and all the npt/AN bungs. Bracket on the back with two rivnuts for the top mount, and two 1/4-20 bungs on the back to come through the firewall. Didn't want to drill through the firewall, but it's pretty heavy, and didn't trust just the top two mounting holes. Pressure tested it, found some leaks, fixed those, and mock/painted it up. 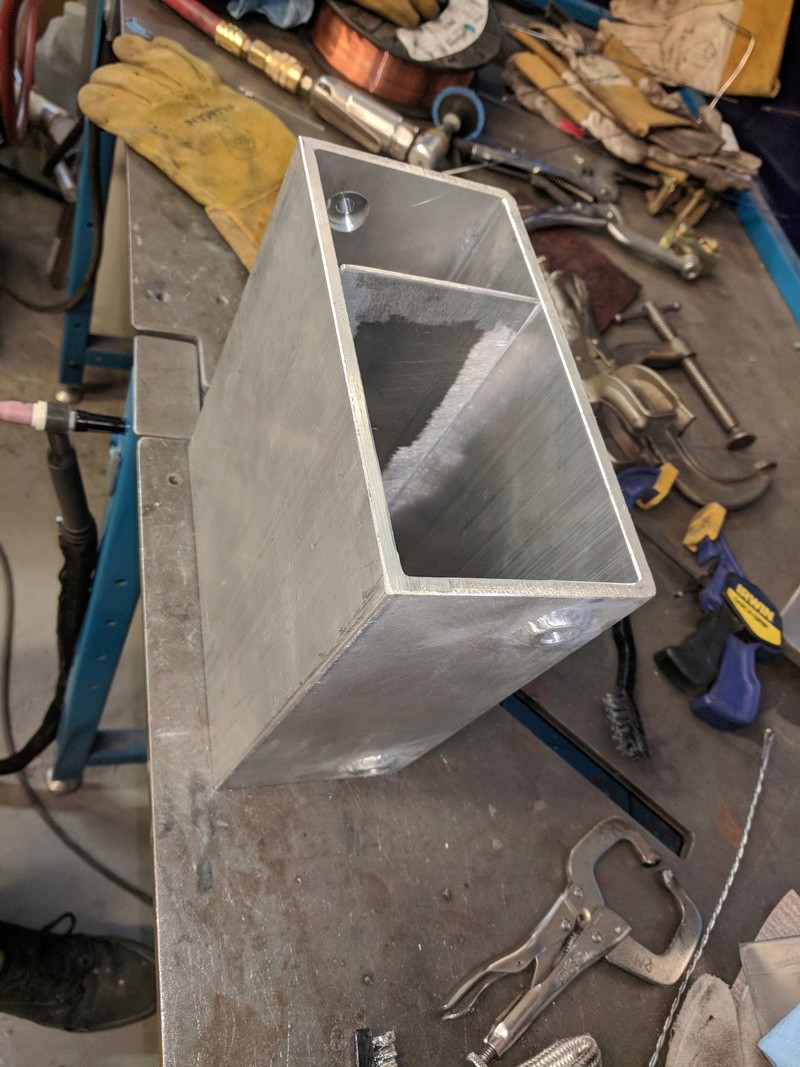 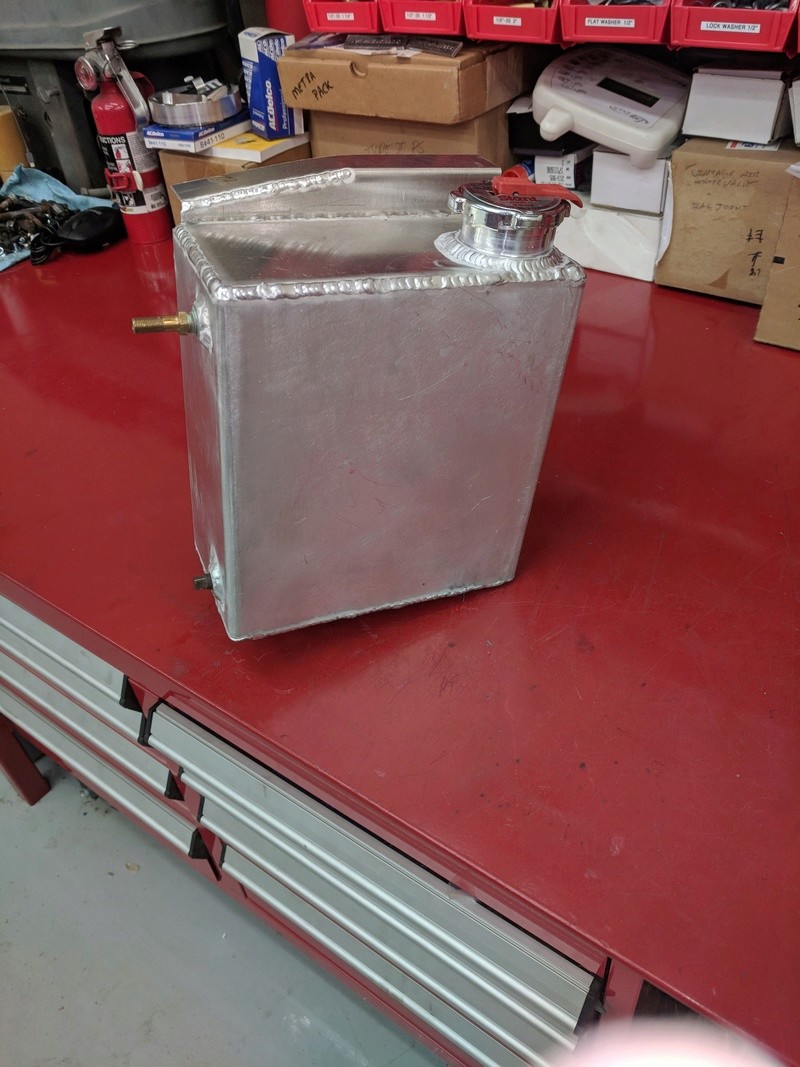 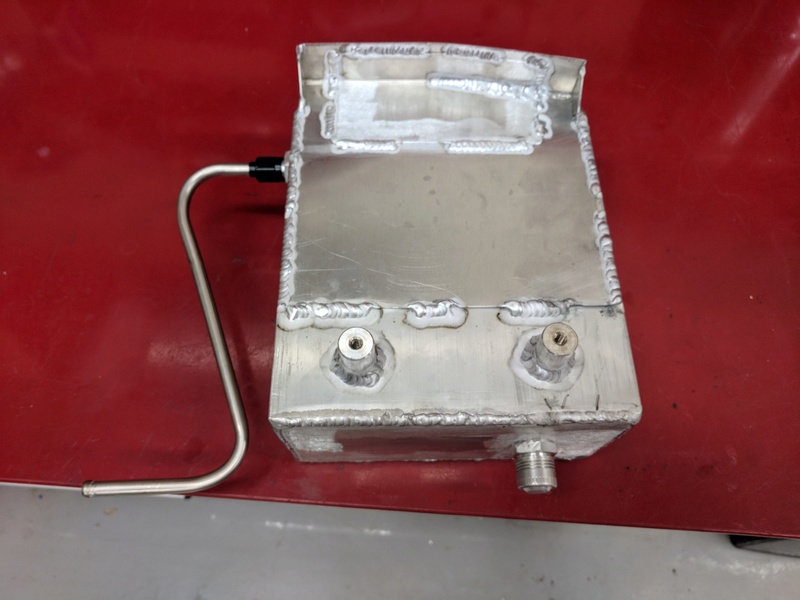 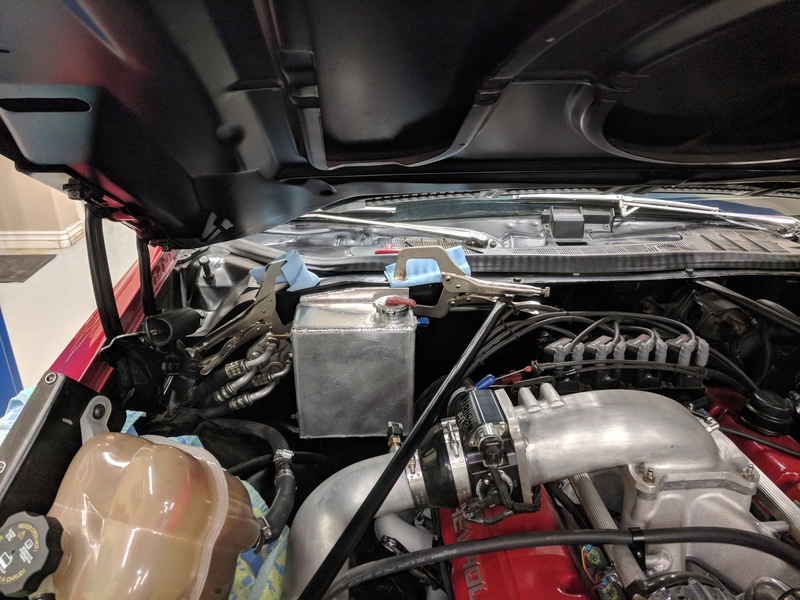 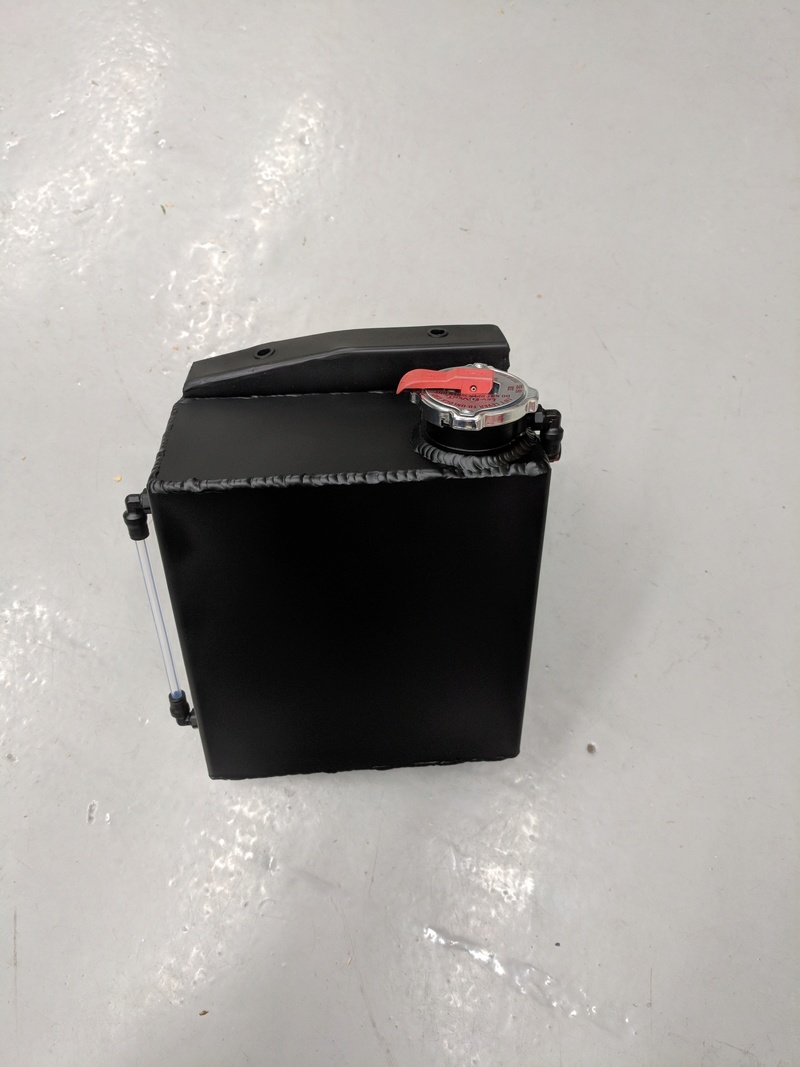 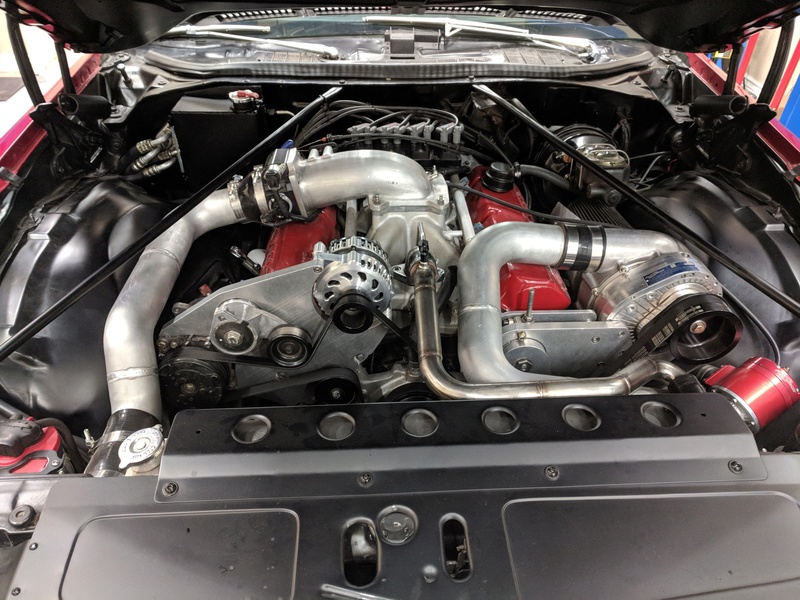 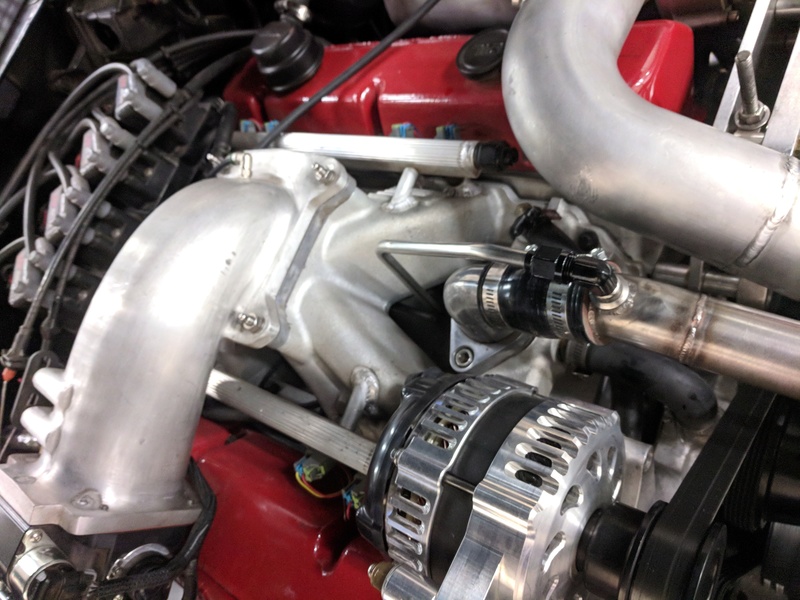 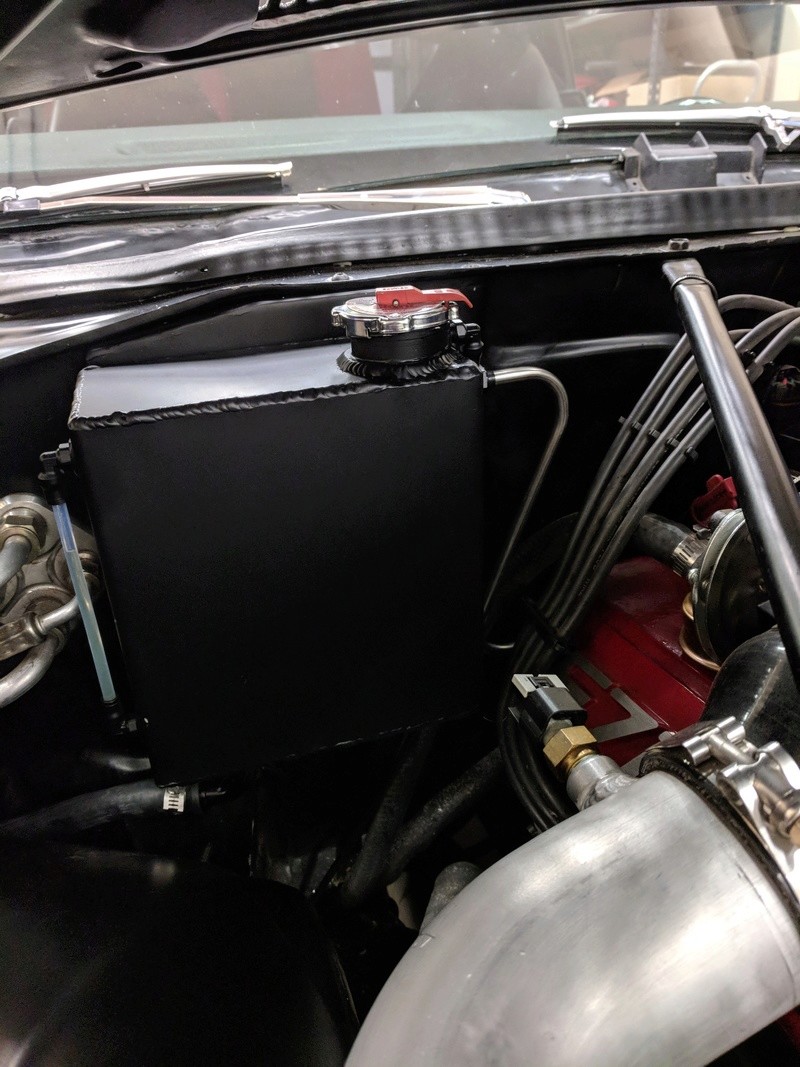 Limey, I think this is everyone's favorite 74! Nice work Brian!